Accessibility links
Saying Goodbye To Old Technology — And A Legendary NYC Repair Shop : All Tech Considered Why are we parting with BlackBerry Classic and VCR — but not fax or QWERTY keyboard? We ask you to nominate outdated tech for phase-out and visit Tekserve, the closing cult Mac store in Manhattan.

Technologies disappear all the time.

Last year, an Indian company that was considered the last recycler of cathode ray tubes from those old bulky TVs quietly stopped recycling the CRT glass into new tube televisions. This year, BlackBerry discontinued its last model featuring the the original signature plastic keyboard. This month, the final maker of VCRs in Japan will cease production.

Some technologies slowly fade into obsolescence (think phone booths or typewriters) while others go quickly, in a relative sense (floppy disks anyone?). But some, despite archaism, persist.

We asked you to suggest technology that you wish would fade away. You offered up a few — dot-matrix printer, multidisc CD changer, voicemail — but the leading cause of tech agony, by far, was the fax machine.

"I ask myself every day, 'Why must I still have one?' " says Erica Lacher, a veterinarian in Gainesville, Fla. "I simply can't get some companies to communicate with me any other way. It drives me crazy because I have to pay for an extra phone line, I have to pay for the faxes, I have to pay for my staff to get us off junk fax lists. It's just ridiculous. I hate that stupid thing."

Harvard professor Calestous Juma says the technologies that are hardest to discontinue are those that are part of a larger ecosystem, which are established within a home or a professional microcosm — it's almost like removing a species from a wider environment.

"So when it goes extinct, there's also some sense of feeling of empathy that something has been lost that's bigger than just the device itself," says Juma, author of Innovation and Its Enemies: Why People Resist New Technologies. "People don't fear new technologies; people fear loss."

He says elimination of technologies has historically been slowed by the pace of innovation — but is increasingly speeding up, especially as "smart" devices and artificial intelligence lower the learning curve for people to adapt to new capabilities.

As Juma points out, technologies that are hardest to let go are those connected to an ecosystem.

A key element, of course, is the repair shop.

And in Manhattan this week, Apple device owners say goodbye to one such store — a legendary independent repair store that predates the first official Apple Store, called Tekserve. 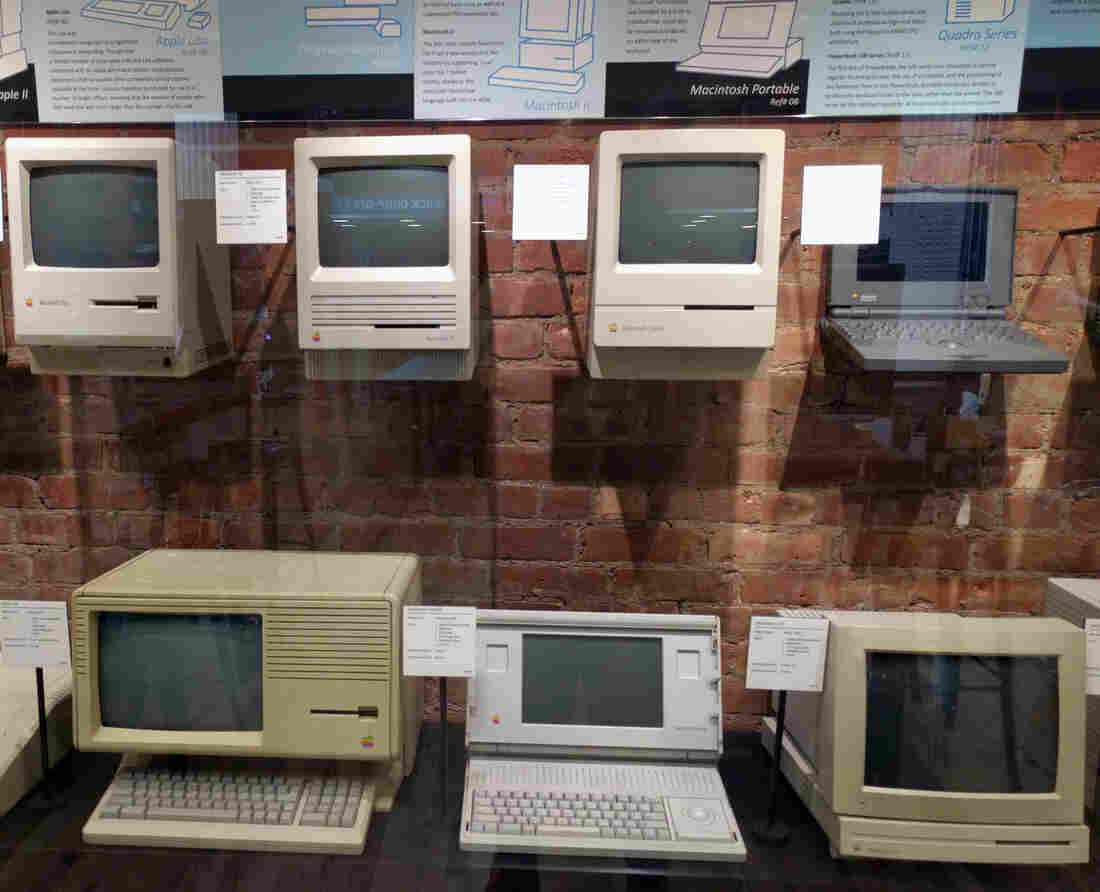 Old Macs are displayed in glass cases in the back of Tekserve, a repair shop with a cult following that's closing this week. Jon Kalish hide caption 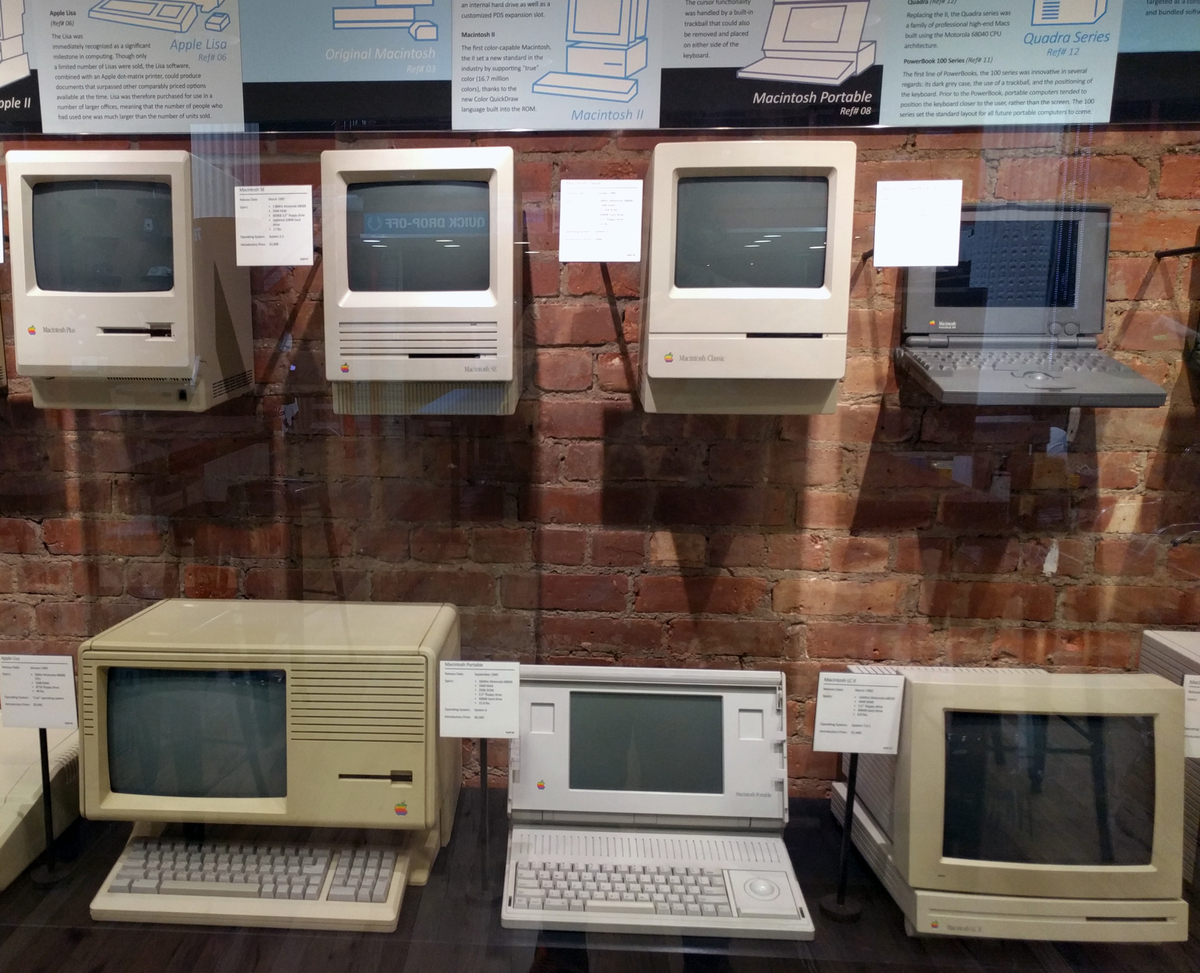 Old Macs are displayed in glass cases in the back of Tekserve, a repair shop with a cult following that's closing this week.

"Respect those who came before"

Tekserve has had a cult following for close to 30 years but is closing its doors for good — a victim of high rents and retail competition.

Step inside and marvel at the antique radios, microphones and electrical meters lining the walls. In the back of the spacious store, a display of every model of the Mac ever made. A 1950s vending machine will still sell you a bottle of Coke for a dime.

David Lerner is one of the two radio engineers who started the store in 1987 — 14 years before the first Apple Store opened. "For a long time we were a Mac destination in New York," he says. But then, Apple stores started to pop up. "They're temples, really," Lerner says. "There are six within, what, 2 miles of us now. It's more convenient to go closer."

Co-founder Dick Demenus says what Apple stores' uncluttered, spotless decor is missing is history. "Everything is forward-looking. It's all new; it's all clean," he says. "I want to respect those who came before."

Tekserve customers take a decidedly analog deli counter ticket and wait for their number to be displayed on old Macs, kept alive from the 1980s. The store in Manhattan's Chelsea neighborhood was so well-known in New York that it had a cameo in Sex and the City, when Carrie Bradshaw brought her crashed Powerbook here.

"Tekserve was a planet unto itself," says Chester Higgins Jr., a former photographer for The New York Times. The shop has a devoted following among filmmakers and other creative professionals. "Nobody had the turnaround time that Tekserve had," says Higgins.

And there was another point of attraction: One of the owners had hacked the iMac construction to install a second monitor on its base. 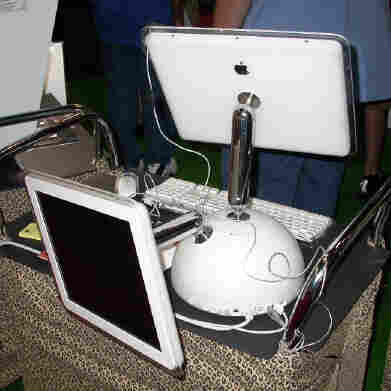 One of Tekserve's owners had built this double-headed Mac. Jon Kalish hide caption

"It was just awesome and this is so much of why I think people would come in," says Asher Rapkin, who worked at the store when the double-headed iMac went on display. "Because while you were sitting there stressed out waiting to find out if your term paper was going to get saved, you could play with a two-headed iMac."

The techs at Tekserve have been known to discover problems and fixes for Macs even before Apple. The store's diverse workforce includes white-haired baby boomers, tattooed millennials, female techs and people of color. Deb Travis, who has worked at Tekserve for 20 years, says many of her co-workers were touring musicians.

"That was one of the big perks of working here," she says. "Most of the people who worked here had other things they were doing."

Other perks included health insurance and free lunch for the store's 100 or so employees. Many say it's the best place they ever worked.