Accessibility links
A Robot That Harms: When Machines Make Life Or Death Decisions : All Tech Considered An artist has designed a robot that purposefully defies Isaac Asimov's law that "a robot may not harm humanity" — to bring urgency to the discussion about self-driving and other smart technology.

Artist and engineer Alexander Reben says his is the first robot to autonomously and intentionally break Asimov's first law of not injuring a human being.

Isaac Asimov inspired roboticists with his science fiction and especially his robot laws. The first one says:

Artist and roboticist Alexander Reben has designed a robot that purposefully defies that law.

"It hurts a person and it injures them," Reben says. His robot pricks fingers, hurting "in the most minimal way possible," he says. 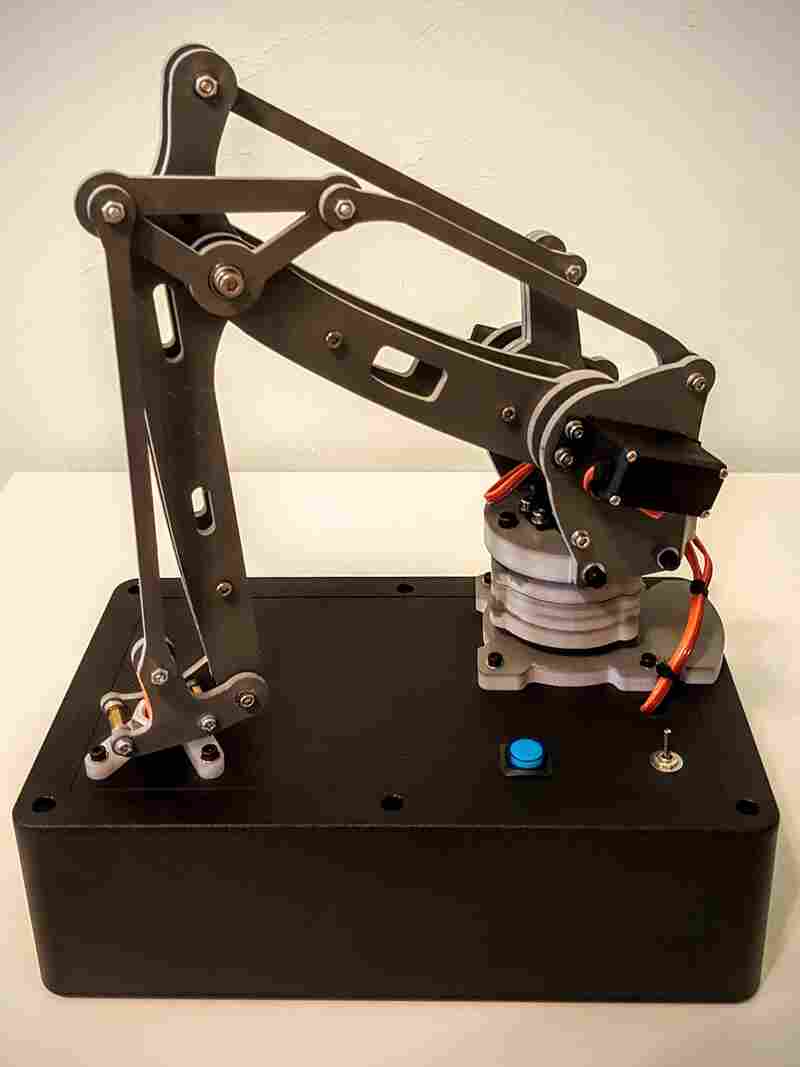 When a person places a finger in the slot on the left, the robot uses an algorithm — unpredictable even to its creator — to decide whether to prick the finger with the pin on the end of its arm. Alexander Reben hide caption 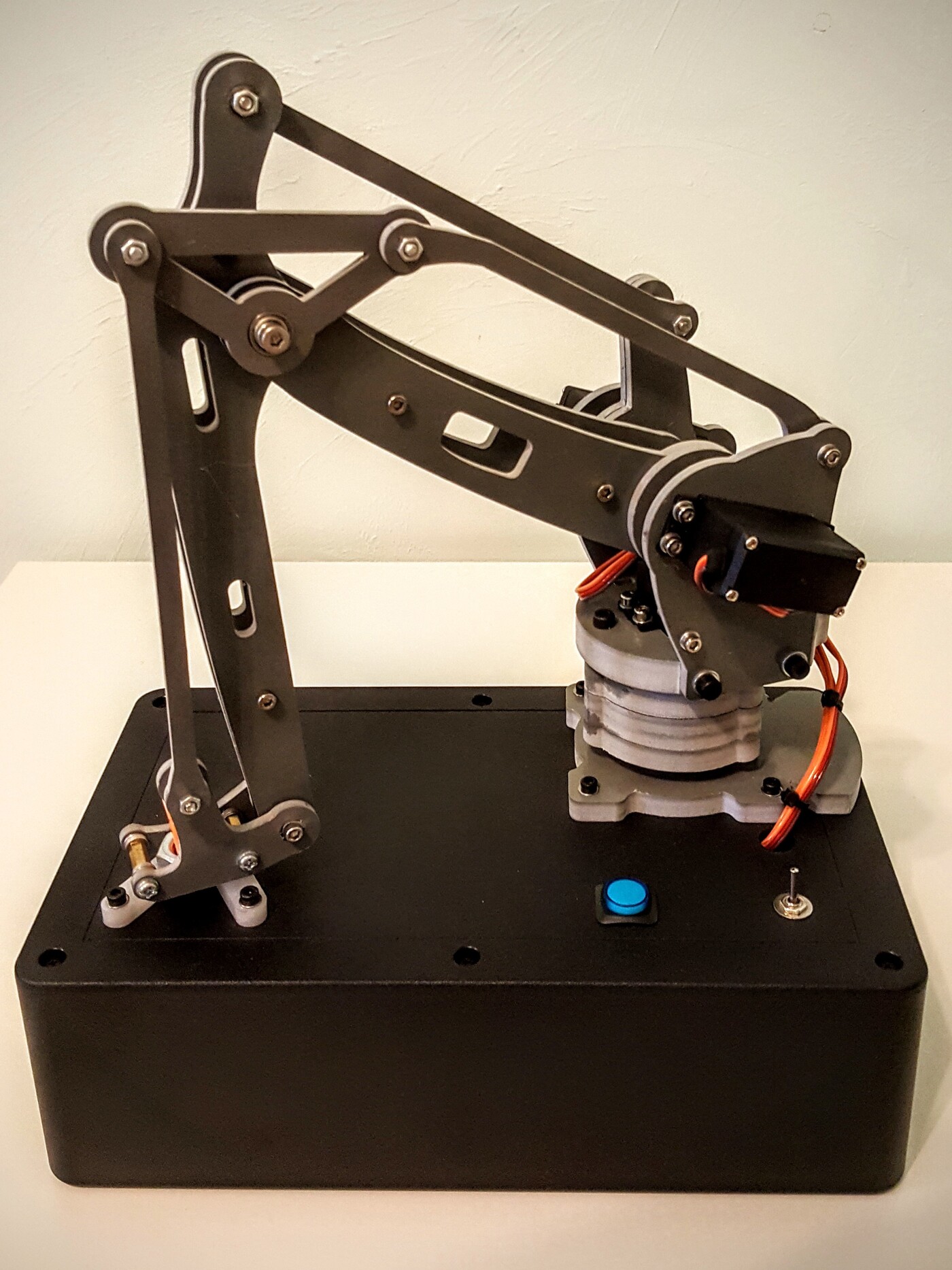 When a person places a finger in the slot on the left, the robot uses an algorithm — unpredictable even to its creator — to decide whether to prick the finger with the pin on the end of its arm.

And the robot's actions are unpredictable — but not random. "It makes a decision in a way that [I] as the creator cannot predict," Reben says. "When you put yourself near this robot, it will decide whether or not to hurt and injure you."

Though it may seem like a slightly silly experiment, Reben is making a serious point: He's trying to provoke discussion about a future where robots have the power to make choices about human life.

Reben's robot is not very elaborate. It's just a robotic arm on a platform, smaller than a human limb and shaped a bit like the arm on one of those excavators they use in construction — but instead of a shovel, the end has a pin. (And in case you were wondering, each needle is sterilized.)

"You put your hand near the robot and it senses you," Reben explains. "Then it goes through an algorithm to decide whether or not it's going to put the needle through your finger."

I put my finger beneath the arm. The waiting is the hardest part, as it swings past me several times. Then I feel a tiny sting when it finally decides to prick me.

Reben created this robot because the world is getting closer to a time when robots will make choices about when to harm a human being. Take self-driving cars. Ford Motors recently said it planned to mass produce autonomous cars within five years. This could mean that a self-driving vehicle may soon need to decide whether to crash the car into a tree and risk hurting the driver or hit a group of pedestrians.

"The answer might be that 'Well, these machines are going to make decisions so much better than us and it's not going to be a problem,' " Reben says. "They're going to be so much more ethical than a human could ever be."

But, he wonders, what about the people who get into those cars? "If you get into a car do you have the choice to not be ethical?"

And people want to have that choice. A recent poll by the MIT Media Lab found that half of the participants said they would be likely to buy a driverless car that put the highest protection on passenger safety. But only 19 percent said they'd buy a car programmed to save the most lives.

Asimov's fiction itself ponders a lot of the gray areas of his laws. There are a total of four — the fourth one was added later as the zeroth law:

In Asimov's stories, the laws are often challenged by the emotional complexities of human behavior. In a screenplay derived from his famous I, Robot, the protagonist is a detective who doesn't like robots because one had saved him in a car crash, but let the girl beside him die based on a statistical determination that she was less likely to survive.

Still, Asimov's laws are often cited by scientists in the field as a kind of inspiration and talking point as we move toward a world of increasingly sophisticated machines.

"The ability to even program these laws into a fictional robot is very difficult," Reben says, "and what they actually mean when you really try to analyze them is quite gray. It's a quite fuzzy area."

Reben says the point of making his robot was to create urgency — to put something in the world now, before machines have those powers in self-driving cars.

"If you see a video of a robot making someone bleed," he says, "all of a sudden it taps into this viral nature of things and now you really have to confront it."

When A Robot Comes Knocking On The Door

A previous Web version of this story said that in Isaac Asimov's I, Robot, the protagonist is a detective who doesn't like robots because one had saved him in a car crash, but let the girl beside him die. That plotline was actually in a screenplay derived from I, Robot.