Accessibility links
Troubled Galaxy Note 7 Recall Leaves Some Samsung Customers Frustrated : All Tech Considered U.S. users trying to take part in Samsung's unofficial recall find themselves winding through a network of stores and unclear guidelines. The government has yet to announce a formal recall. 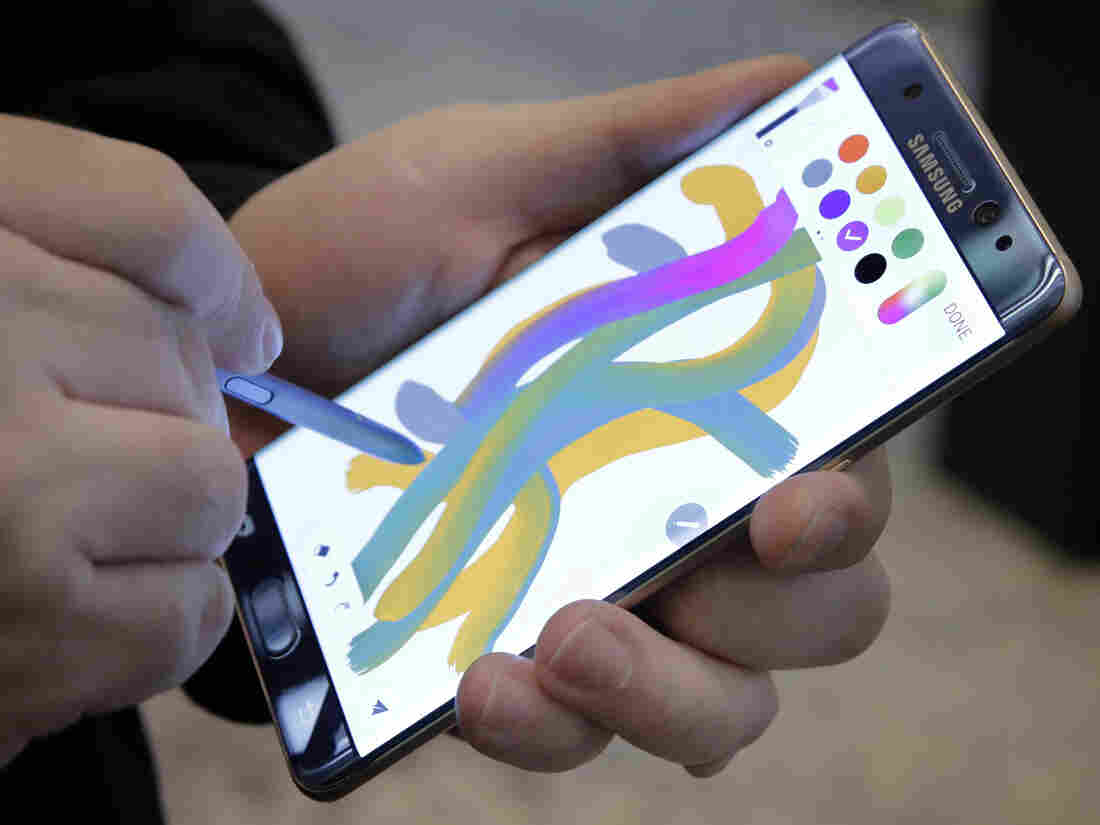 Samsung's Galaxy Note 7 is demonstrated in New York on July 28. All owners of the new smartphone have been urged to exchange the device after reports of phones' exploding or catching fire. Richard Drew/AP hide caption 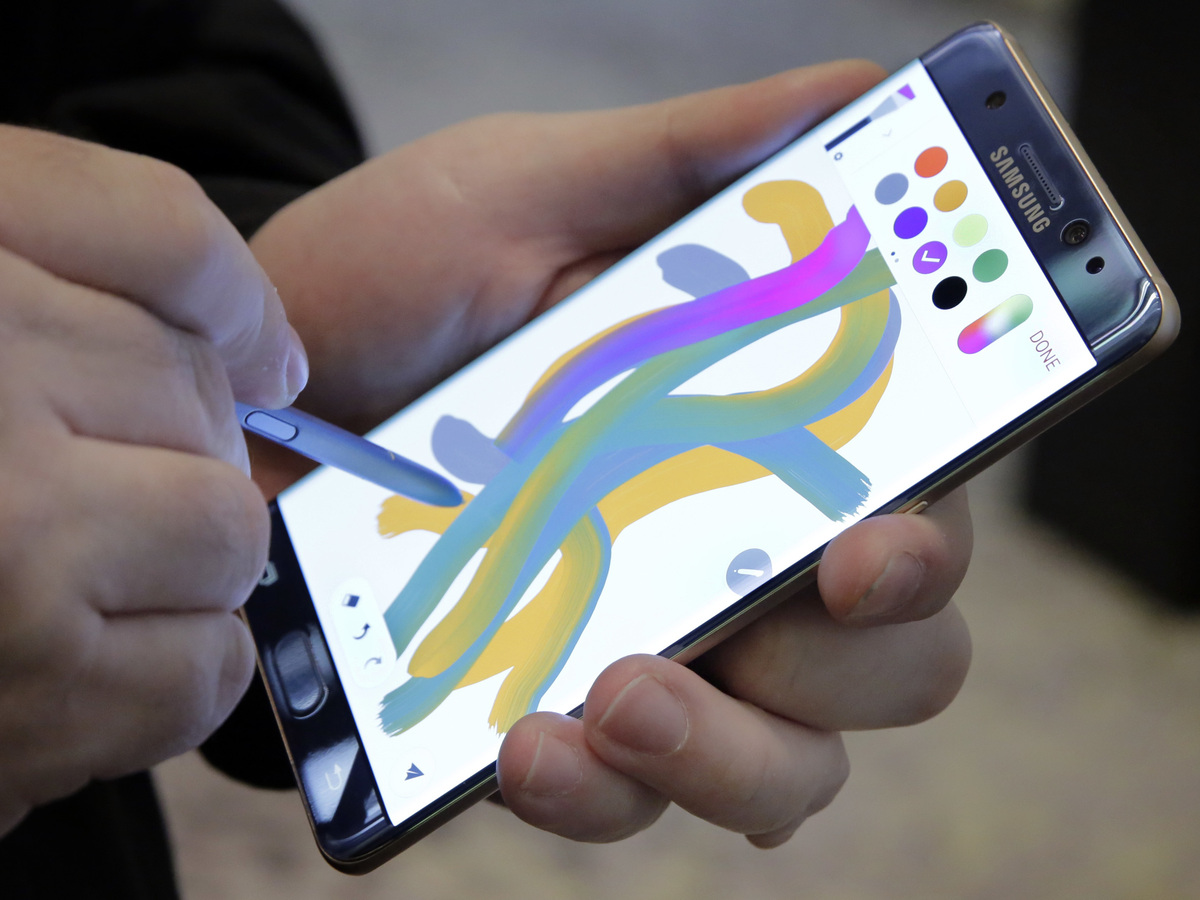 Samsung's Galaxy Note 7 is demonstrated in New York on July 28. All owners of the new smartphone have been urged to exchange the device after reports of phones' exploding or catching fire.

Samantha Cannariato has been trying to return her Samsung Galaxy Note 7 for more than a week. All owners have been urged to exchange the device after reports of phones exploding or catching fire. After hours in calls and five trips to the store, Cannariato still can't get rid of the phone.

Her story — like that of many other U.S. users trying to take part in Samsung's unofficial recall — winds through a network of stores, interchanging sales reps, bureaucratic intricacies and unclear guidelines. As the world's largest smartphone maker pushes to reclaim some 2.5 million potentially hazardous units shipped globally, it is facing an enormous-scale process and growing concerns about the recall's lasting impact.

Cannariato's Galaxy Note 7 is less than a month old. Its purchase was well-weighed — she calls it her first "fancy phone." And it is: Waterproof, with curved display, top-rated camera and a practical stylus, Samsung's latest smartphone is a crown jewel, the company's "best," an anticipated rival to Apple's new iPhone. "A really great phone," in Cannariato's words.

But then came several dozen reports that the phones overheated and flared up, particularly while being charged. Samsung Electronics traced the problem to a flaw in the phone's lithium-ion battery — such batteries have afflicted other devices before, setting ablaze "hoverboard" scooters, electric cars, airplanes and iPods.

"There was a tiny problem in the manufacturing process, so it was very difficult to figure out," Dongjin Koh, president of Samsung's mobile business, told reporters on Sept. 2.

The company launched a global recall. "It will cost us so much it makes my heart ache," Koh said. But "what is most important is customer safety," he said. 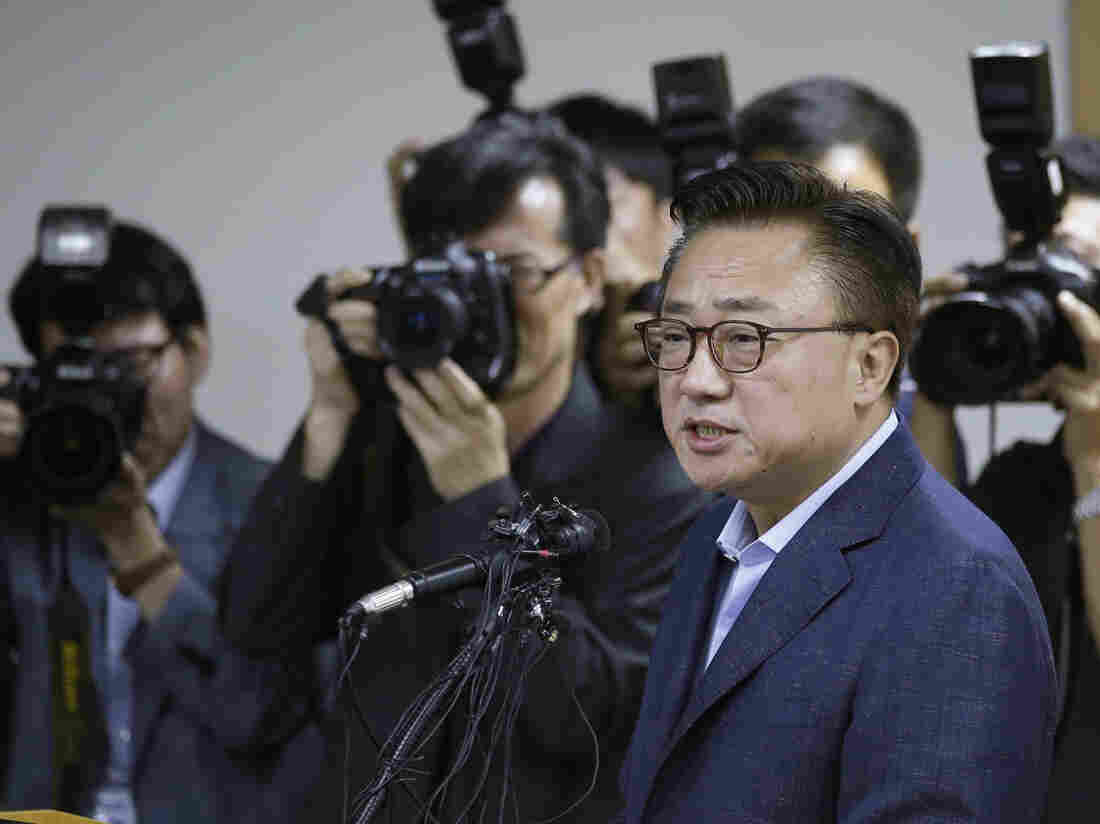 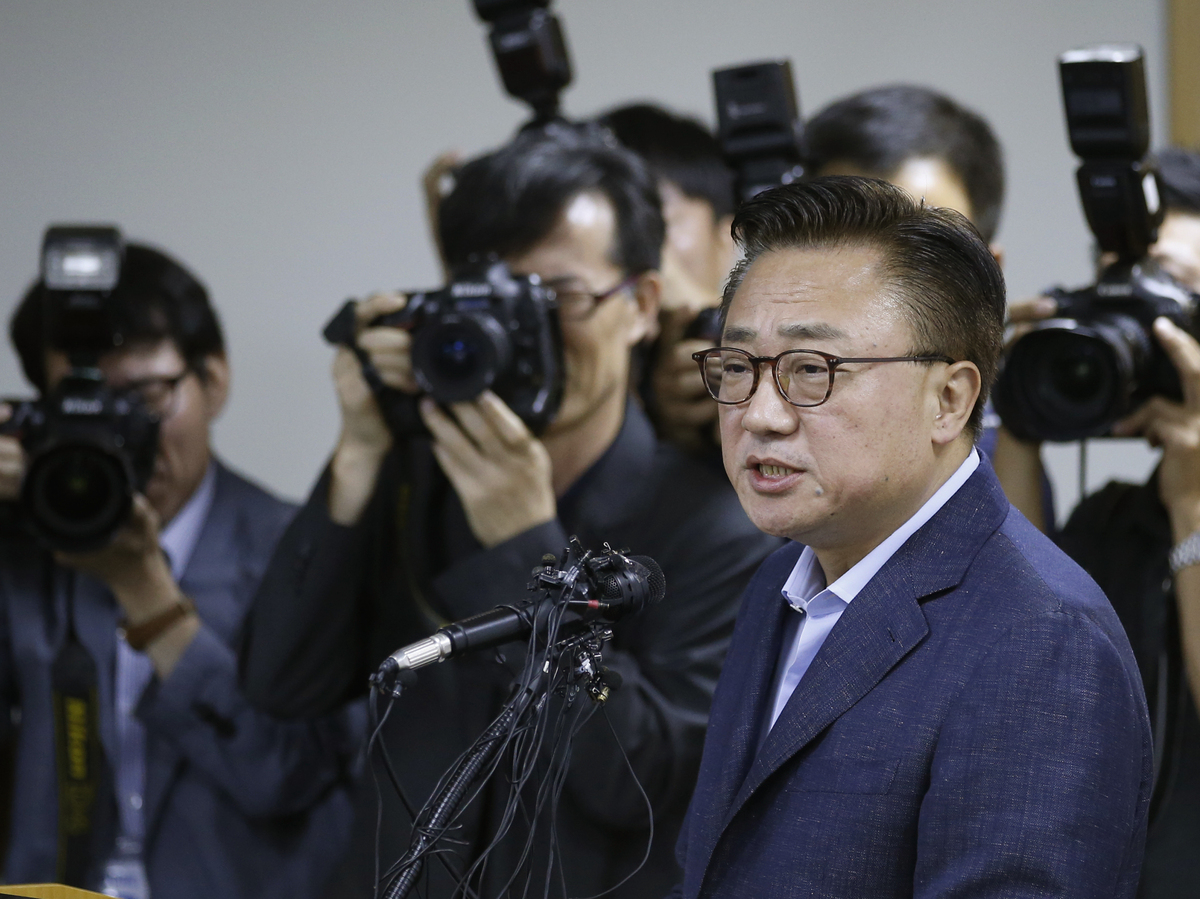 Cannariato, who works in logistics in Port Wentworth, Ga., heard the news a day or two later. First came a Facebook post from a friend who had helped her pick the phone. Then came a message from her carrier, AT&T.

She hurried over to the AT&T authorized retailer where she had bought the device. The clerk asked her whether she was experiencing problems with the phone ("No, it hasn't exploded yet.") and declined to accept it. Cannariato decided to give it time; the directions might not have trickled down, she thought. When she returned later that week, another clerk referred her to an official AT&T store.

As part of the recall, Samsung is offering to switch U.S. consumers to another Galaxy phone or get a loaner phone until the new, safer Galaxy Note 7 becomes available, plus a gift of $25. Major carriers, including AT&T, have expanded the offer to exchange the recalled Samsung phones for any other phone in the store.

However, AT&T representatives referred Cannariato back to the retailer that had sold her the phone — they couldn't find her in the system. There, she faced another, almost gleeful, rejection from another clerk, she says.

Then the system was down. The store didn't pick up the phone. On the fifth visit, a manager said Cannariato couldn't exchange her phone because it was attached to a business account, not in her name but in her mother's. Later, she was referred back to the original retailer.

Meanwhile, she continues to use her Galaxy Note 7. "When I use the charger, I put it in a metal loaf pan," she says, "and leave it there with nothing around that could catch fire."

Altogether, Cannariato estimates the exchange has subsumed more than 10 hours. "I've been in the store, on the phone, waited, been online. I have texted, I have tweeted, I have Facebooked," Cannariato says. "There's no one way to do this. There are a million different avenues and it's easy for each avenue to push the problem to someone else."

Such complications, to varying degrees, are faced by other customers. Alongside stories of completely smooth transactions floating on Twitter, reddit and Samsung forums are posts about lengthy customer service calls, unnecessary store visits, demands of original boxes or accessories and other hiccups.

"That's really on Samsung," says Avi Greengart, consumer devices analyst at market research firm Current Analysis. "They have not been very clear in their communications, in terms of what specifically is a problem, how it will be resolved and what's the time frame."

In its announcements so far, Samsung Electronics America refers to the fire-hazard problem vaguely as a "battery cell issue" and to the recall as "a product exchange program." The company says consumers will be able to get a new version of the Note 7, but its approval is pending without a clear release date.

In a statement, the company says it is working with the Consumer Product Safety Commission and "carrier partners to develop and evaluate solutions that are best for US Note 7 owners. No action will be taken without the approval of the CPSC. Customer safety remains our top priority."

And the CPSC's involvement is, in fact, part of the challenge. That is the agency that facilitates product recalls.

Some iPhone 6 Plus Users Find An Unwanted Feature: It Bends

Traditionally, companies voluntarily work with the government to operate the recall process, providing the details of a problem. That prompts a formal recall notice, which legally halts all sales of the faulty product and creates a central location for consumers to report incidents, learn about remedies and find proper channels to pursue them.

This has yet to happen for the Galaxy Note 7. A week after Koh's press conference, the CPSC issued a warning to consumers to power down Note 7s and stop charging or using them. Samsung and the CPSC have yet to announce a formal recall. Technically, it's still completely legal to keep selling the Galaxy Note 7 — and some do remain on sale online.

"This is going to hammer Samsung earnings, but it doesn't have to permanently damage Samsung's brand if they react swiftly and clearly," Greengart says. And so far, he says, "they've undercommunicated, rather than overcommunicated."

Samsung's shares regained some strength in Wednesday's trading after taking a nosedive on the news of the recall, which erased billions of dollars in company value.