Accessibility links
Music, Spies And Exact Change: The Strange History Of Electronic Tolls : All Tech Considered The surprising history of electronic toll collection can be traced back to the theremin and a Russian spy program. It's still in use, even as tollbooths are being eliminated. 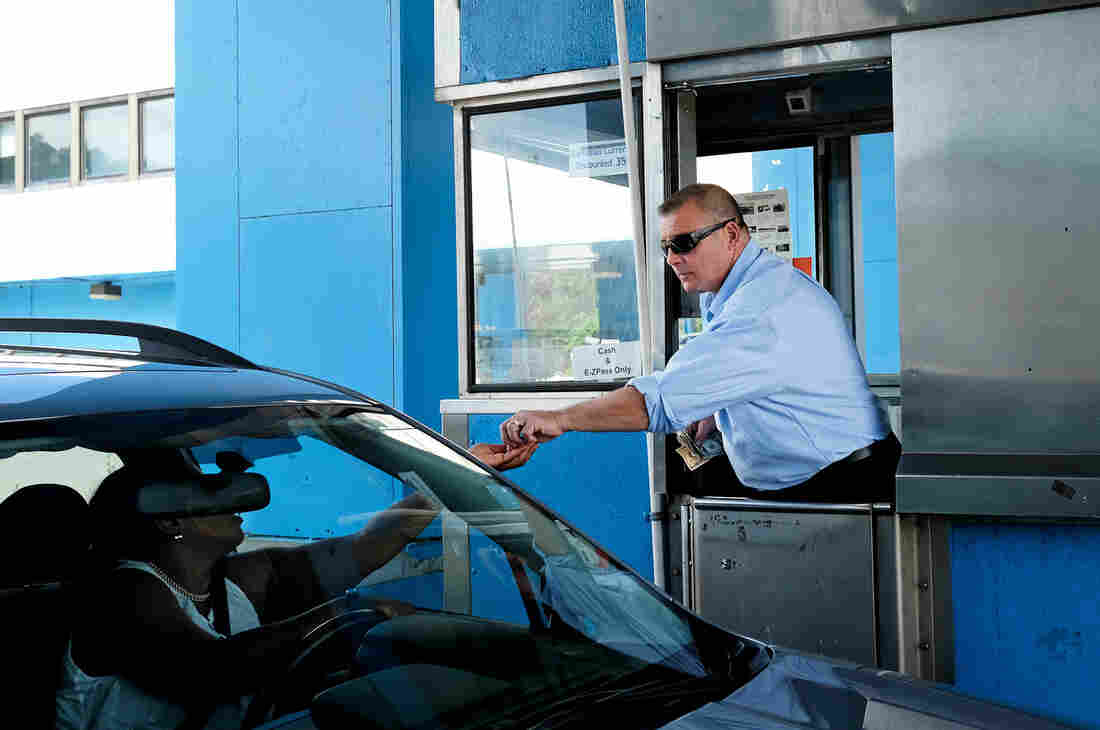 Tollbooth cashier Henry Gregorio collects change from drivers at the New Rochelle Toll Plaza on I-95. Gregorio has worked in a tollbooth since 1980. Tollbooths are gradually being replaced by E-ZPass technology. Stephen Nessen/WNYC hide caption 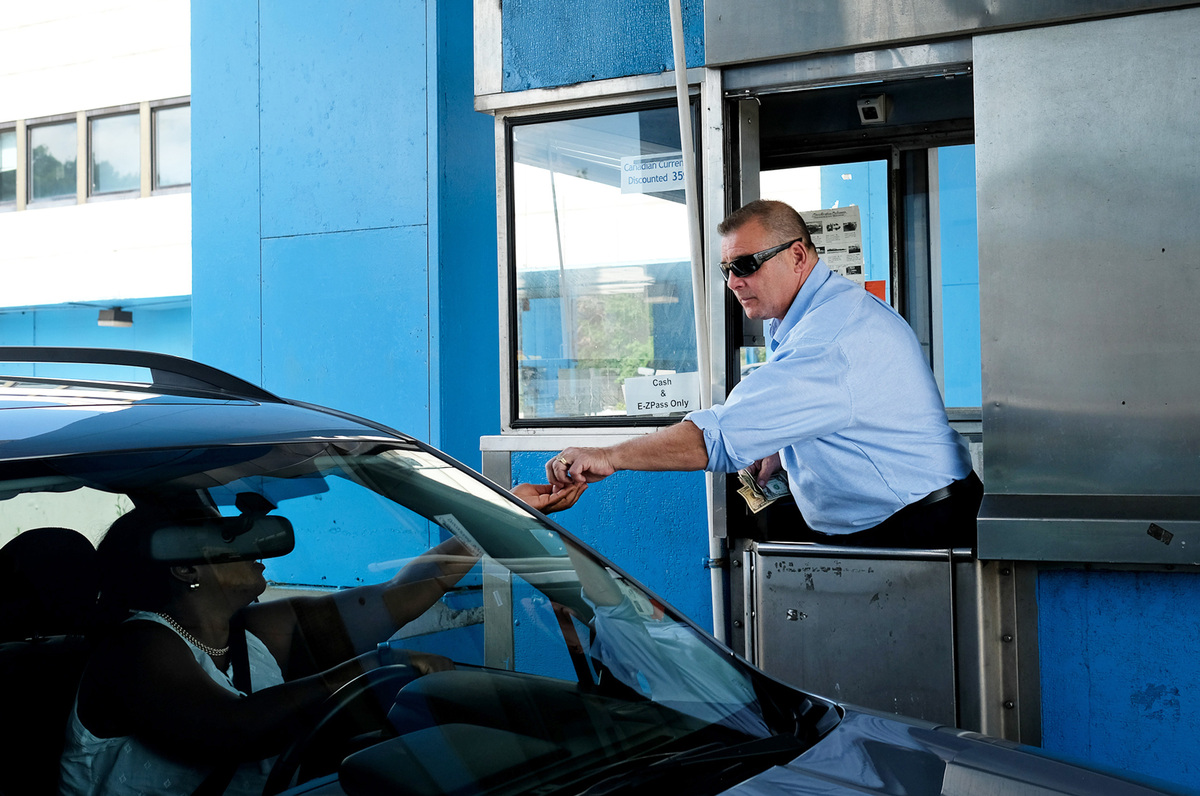 Tollbooth cashier Henry Gregorio collects change from drivers at the New Rochelle Toll Plaza on I-95. Gregorio has worked in a tollbooth since 1980. Tollbooths are gradually being replaced by E-ZPass technology.

There was a time when the most frustrating thing about summer road trips were the lines at the tollbooth.

Remember digging through the seats for exact change or scrambling to find the shortest line? Toll collection has come a long way, from handing money to cashiers to simply driving through the booth with an E-ZPass.

But the technology passed through many, often surprising, hands — musicians and spies and NASA scientists — to become the electronic tollbooths many highways enjoy today.

"Music out of thin air"

The story of the electronic tollbooth begins at the turn of the century, in St. Petersburg, Russia. That's where Leon Theremin was born.

Yes, that Theremin — the creator of the musical instrument you play without even touching.

"Just as World War I was starting, and then the Russian Revolution, he found himself in the middle of that and was pulled into the new Soviet inner circle and told he was now a Soviet scientist," says Albert Glinksy, who wrote the biography Theremin: Ether Music and Espionage.

Playing with electromagnetic fields while working on a gas detection meter, Theremin discovered a trick: Using the radio frequency between two antennas, he'd wave one hand for volume and the other for pitch.

"The headlines were just over the top," Glinsky says. " 'Magician of music creates music out of thin air; how is this possible?' Even scientists, until they really understood the principle, were kind of baffled by what he was doing."

Theremin was sent to New York City, where he performed and continued to invent. But he also had another mission.

"He was carrying out espionage, so he had this sort of double life in New York," Glinsky says.

Back in the USSR

But the political winds had changed, and he was sent to a Siberian labor camp, then transferred to a prison for scientists.

It was there that Theremin took spying to a new level when he was ordered to build a bugging device to spy on the U.S. ambassador in Moscow.

"The brilliance of this device was it had no batteries, it needed no electrical external source," Glinsky says. "And it was perfectly inert until it was activated, when they wanted to externally, by microwave beams from a companion device that was a few buildings down."

The bug was the size of a quarter and placed in the office of the U.S. ambassador in Moscow. It was hidden in a seal of the United States, where it stayed for seven years before being accidentally discovered.

Theremin may have created the first RFID-like device. But it took a Brooklyn inventor to connect another technology — friend or foe radar — with modern computing that gets us to electronic toll collection.

"I was responsible for all the engines," says Cardullo, who now lives and works in Alexandria, Va.

In the 1960s radio identification, or RFID, tags were used on anti-theft devices in stores and for keeping track of cattle.

Cardullo took that technology and the work Theremin had done 30 years before — using microwaves to activate a device — and added a modern twist: a memory chip. In 1970 he filed the first patent on a battery-free transponder that could transmit and receive information.

He imagined what the RFID device would revolutionize: "Toll systems, doorways, medical records."

A year later, Cardullo landed a meeting with the Port Authority of New York and New Jersey. 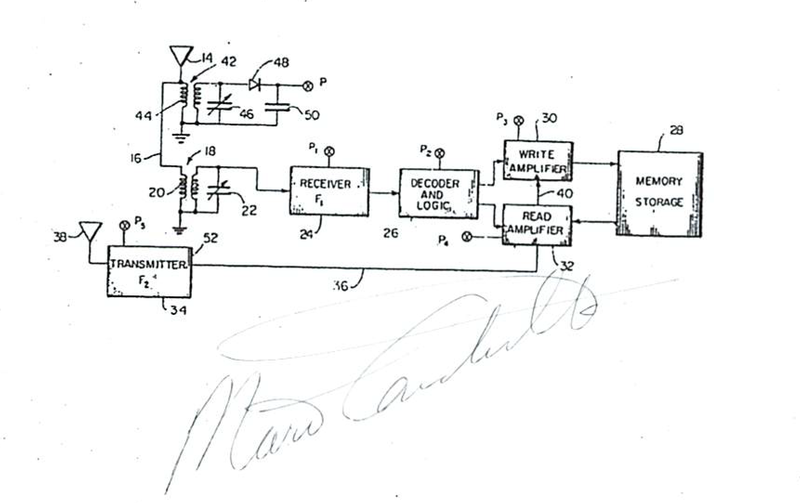 In 1970, Mario Cardullo filed to patent this battery-free transponder, which became the basic template for electronic toll devices like the E-ZPass. Courtesy of Mario Cardullo hide caption 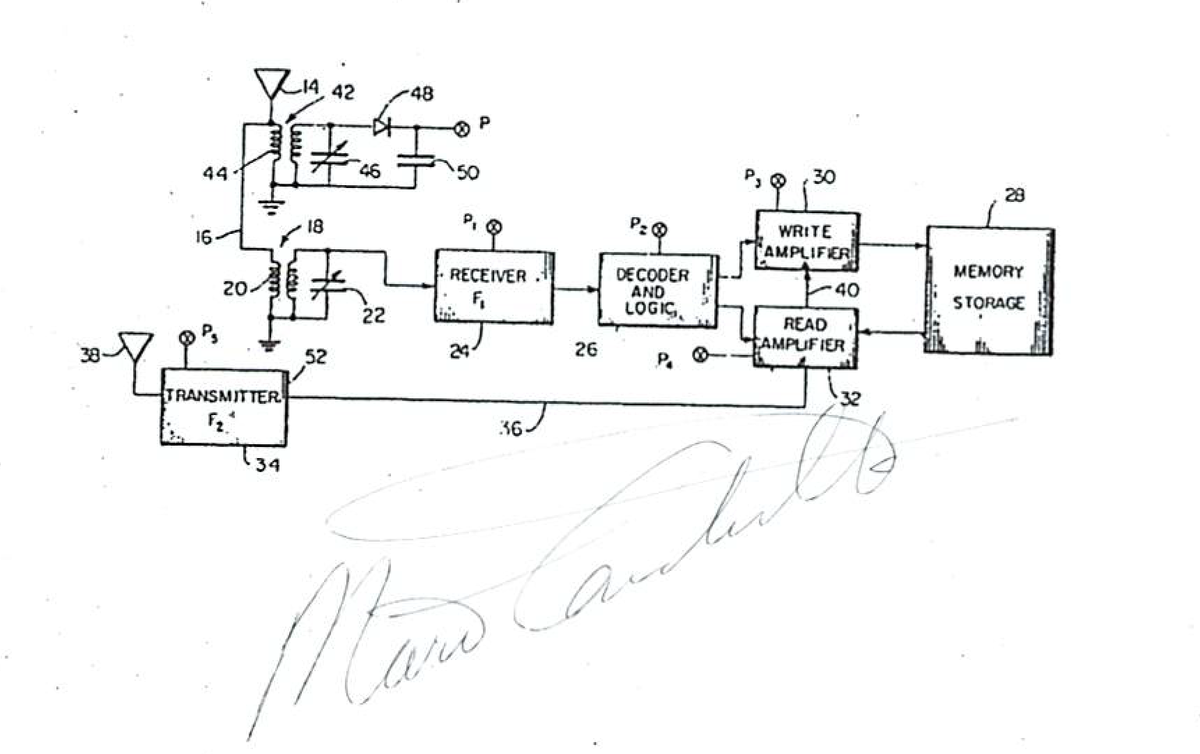 In 1970, Mario Cardullo filed to patent this battery-free transponder, which became the basic template for electronic toll devices like the E-ZPass.

He wanted to demonstrate an electronic toll collection device on the George Washington Bridge. The prototype was the size of two packs of cigarettes.

"The first thing they [said] to me was, 'Well, nobody will ever put that on the window of their car, it's too big,' " Cardullo remembers.

He reassured them he could make it smaller. But the Port Authority passed.

The first electronic tollbooth in the world had been installed in Norway in 1987; Dallas quickly followed in 1989.

Not until 1994, however, did multiple states — New York, New Jersey and Pennsylvania — agree to use the same device for their toll systems. That device, the E-ZPass, was quietly unveiled the next year in New York City, with its very own lane and purple sign.

Now the E-ZPass is accepted in 16 states, with a handful of similar systems used all across the country. And all of them use the same technology Leon Theremin created nearly a century ago.

A previous version of this story misspelled some references to Leon Theremin's last name as Theramin.