Accessibility links
The Man Who Stood Up To Facebook : All Tech Considered There is a man who is a thorn in the side of Facebook, a problem that just won't go away. For years he was cast aside as a lowly spammer. Now he's re-emerging as a champion of your rights online. 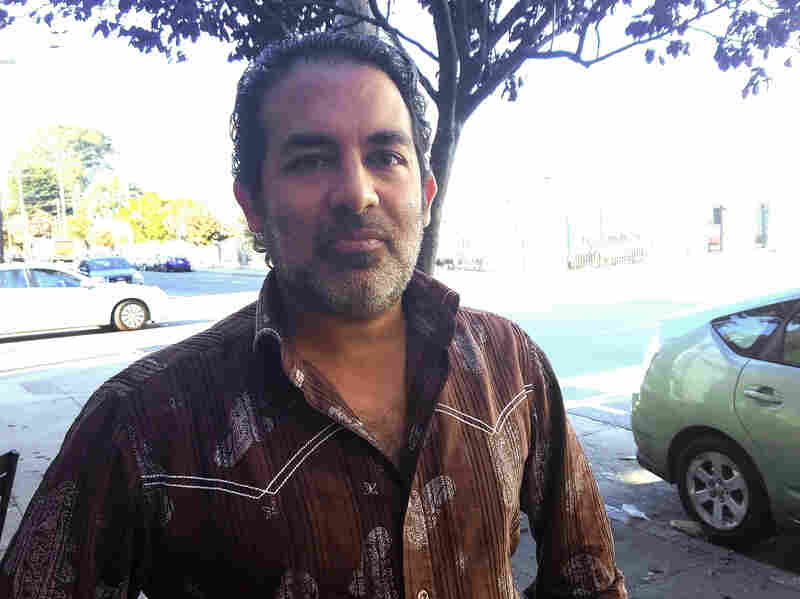 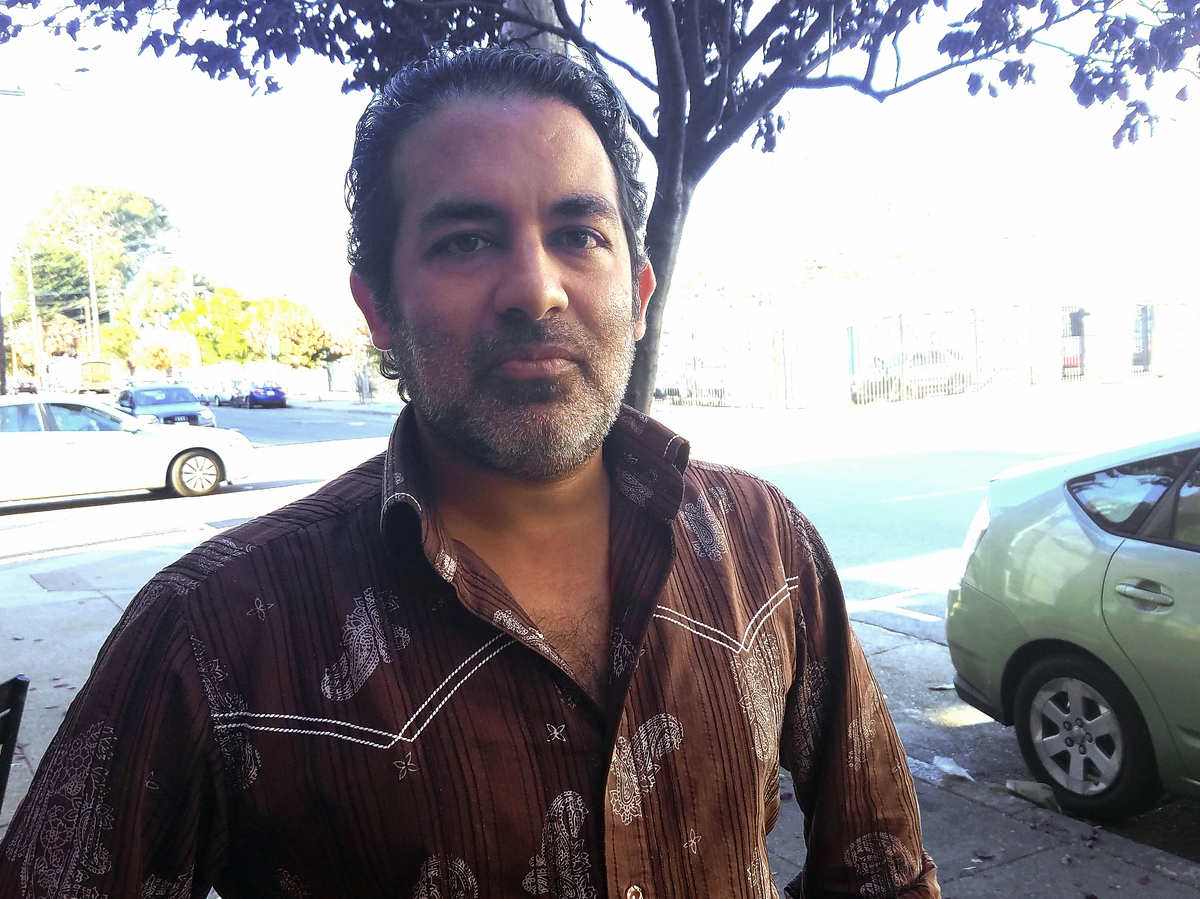 Steven Vachani is in a protracted legal battle with Facebook.

There is a man who is a thorn in the side of Facebook — a problem that just won't go away. In 2008, Facebook sued him, saying he was a hacker and a spammer who was putting users at risk. But in a truly bizarre plot twist, he stood up to the Internet giant — and he has become the unlikely protagonist in a battle for your rights online.

Steven Vachani and I are sitting at a Starbucks because, he doesn't want to say it, but: He doesn't have an office or a home in Silicon Valley anymore.

"I'm passionate about what I believe in and I'm also confident that even when the path is not clear, you know, you'll find a path," he says. "I'm also willing [to] suffer. I think a lot of people have a — they're not adaptable."

Vachani is based in Brazil, where life is more affordable. He flies into San Francisco a lot, though, in an ongoing effort to stay in the tech biz.

He's got a daily routine here: Go on Priceline and look for the cheapest room in town. And when that's too expensive, the 41-year-old with graying hair checks into a youth hostel. "I spent years of my life living in a youth hostel, so it's a place where I feel very comfortable," he says.

Vachani has had very high highs, and very low lows. In 2008, he was the CEO of a hot startup called Power Ventures. Some of the biggest investors in the Valley — the same people who back billionaire Elon Musk — backed him and his vision.

The Internet was different back then. You could say a war was brewing between two camps: open borders and closed borders. Facebook, he says, wanted closed borders. "Facebook would be this walled garden where everything would be safely stored there, by their definition of safely. And they would decide how you access it — and if and when you could take it out."

Current and former Facebook employees say there's a reason you can't, with the click of a button, grab all your selfies, rants and newborn baby pics. While your data is not Facebook property — it's yours, under the terms of service — the company makes it hard for you to take it and go on purpose.

WhatsApp Will Start Sharing Data, Including Phone Numbers, With Facebook

Power wanted a world where users, not a company, were at the center — where they controlled their own data, and could take it with them wherever they wanted freely.

So that's what Power built: a dashboard for all your social networks. Say you had a LinkedIn, a Twitter, Facebook and MySpace (remember MySpace!). You'd put your usernames and passwords for each into the Power portal. And from there, you could post to any account, grab contacts and pictures, and so on.

Vachani claims his site had about 20 million users at its peak (so people liked it); and the social networks let him be — except for Facebook.

"Their response to us was — was a lawsuit," he stutters as he recounts.

Facebook and Power had heated exchanges in 2008. And on Dec. 30 (call it a late Christmas present), Facebook went into court and filed a complaint.

It included two big charges: one, that Vachani is a hacker, breaking into Facebook's computers without the company's permission. Never mind that Facebook users gave him their names and passwords freely.

Point two — and this caught Vachani off guard — was that he was a spammer. "The word 'spam' is kind of like calling someone a rapist. It has — in [the] digital world — calling someone a spammer is the worst thing you could possibly call them."

It's actually quite clever. The complaint made it sound like Power was sending unsolicited emails to users, possibly from a fake Facebook account. It wasn't true. But that didn't matter. The allegation stuck.

Facebook could have taken a different tack and told users: "Hey, you're not allowed to use this competitor." They set other rules, like telling users not to post nude photos. But that directive would reveal a well-kept secret in Silicon Valley.

"Nobody up until that point had ever had, I think, the courage to publicly say to users that they don't control their data," he says, "and honestly Facebook didn't have the courage to say that.

Antonio García Martínez agrees. "That's probably true, yeah. They like the fact that users don't actually read the terms of service. They absolutely love that."

García Martínez used to work at Facebook, as a leader in its ad business, and recently wrote a best-selling book about it called Chaos Monkeys.

He doesn't think much of Steven Vachani's startup, or get how scraping data from someone else's social network is fair or even lucrative. But he does think this little-known standoff is an important window into Facebook.

In dealings with users as well as with advertisers, he says, the company is run by control freaks. "They see Facebook as the end all, be all of your social life. And they expect you to accept that, as a worldview. And this guy's whole product flies in the face of that," García Martínez says.

Hustling for a lawyer

Power Ventures attorney Amy Sommer Anderson says the very first judge in the case didn't get the technicalities. "That's how it seemed. And so he just sort of ate up what Facebook said. Yeah, this sounds complicated!" But, she says, "It's not."

Another judge ruled that Vachani was personally responsible for paying Facebook about $3 million in damages. His life was pretty much blown to smithereens. Vachani tried to declare bankruptcy and Facebook blocked him. His company imploded. Prior counsel walked out on him.

It's in that context he met Anderson, "and he sold it as, you know, it's just an appearance. It's one time. Just a fixed fee, just to keep this from getting thrown out," Anderson says.

Adaptable and resourceful Vachani went on Elance, the site where you find freelancers, and posted about his case — without naming the parties. If he had mentioned Facebook, he says, no one would have been crazy enough to bite.

Anderson had just become a lawyer — she went to law school at night and had never represented anyone before. Her "initial appearance" lasted about a year — and after that, she was not that great at negotiating salary. She says she agreed to a "stupid low rate."

Asked how low, she hesitates to admit: $55 an hour. Facebook-level lawyers get paid more like $1,000 an hour.

But the more Anderson pored over the briefs and decisions, the more she felt an injustice was being done. "I was hooked on the case. It was like crack. I mean, as soon as I was in, I was in," she says.

Vachani and Power kept on losing, badly. Until they got to the 9th Circuit Court of Appeals.

The judges were quite open to hearing him out, and he even got a little praise from Judge Kim Wardlaw, who said his media site was "quite clever."

This summer, the 9th Circuit ended up ruling that Vachani is not a spammer after all. It threw out the very charge that destroyed his life.

Now the parties are fighting over what hacking means — and the case has become about a lot more than Power Ventures and Facebook. It's about how much a company can dictate what you do with your data online — and even if you could be criminally prosecuted for crossing a line.

Criminally because of the law Facebook invoked to sue Vachani, the Computer Fraud and Abuse Act. The CFAA can be used by private companies or by the government, to pursue civil or criminal cases.

Orin Kerr, a law professor at George Washington University, is concerned that this case is a "powder keg of issues." In the Wild West of cyber law, it's not clear what it means to trespass. As the court decision stands now, Kerr says, it gives private companies the power to limit what sites you can visit, and "it might give the government power to arrest you for something you do every day: violate terms of service."

Still, though, Vachani feels some vindication. "It's finally returned to the real issues today, which — they've thrown out everything but the real issues."

NPR spoke extensively with Facebook about the case, and a spokesperson says the company offered Vachani "multiple" chances to resolve its concerns in a way that would not have been "painful" for anyone. He refused. And while he claims he was trying to work with Facebook to resolve the dispute, in an email to his employees, he wrote: "We need to be prepared for Facebook to try to block us and the[n] turn this into a national battle that gets us huge attention." That is, Vachani wanted to pick a fight.

Facebook is not appealing the spam decision and, the spokesperson points out, it has won on hacking so far.

Though now, Kerr and other top-tier lawyers in the country have stepped in to help Power Ventures appeal, free of charge.