Accessibility links
In Samsung's Messy Galaxy Note 7 Recall, Lack Of Transparency Takes Center-Stage : All Tech Considered It's a toss-up between lack of disclosure, if the problem is known, and lack of accountability, if the causes of early fire reports were unknown or misdiagnosed but blamed on the battery nonetheless. 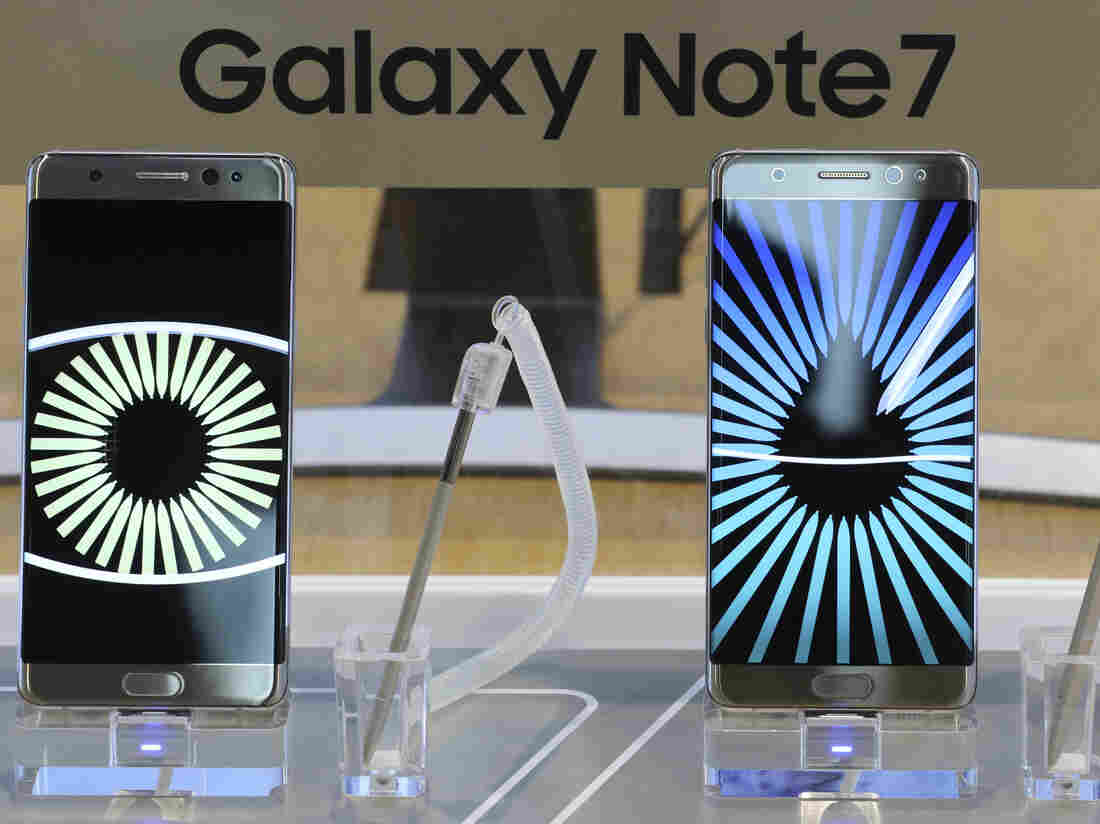 Samsung Galaxy Note 7 was a unique, critically acclaimed phone before the company had to recall every unit, including those issued as allegedly safer replacements, over risks of smoke, fire and explosions. Lee Jin-man/AP hide caption 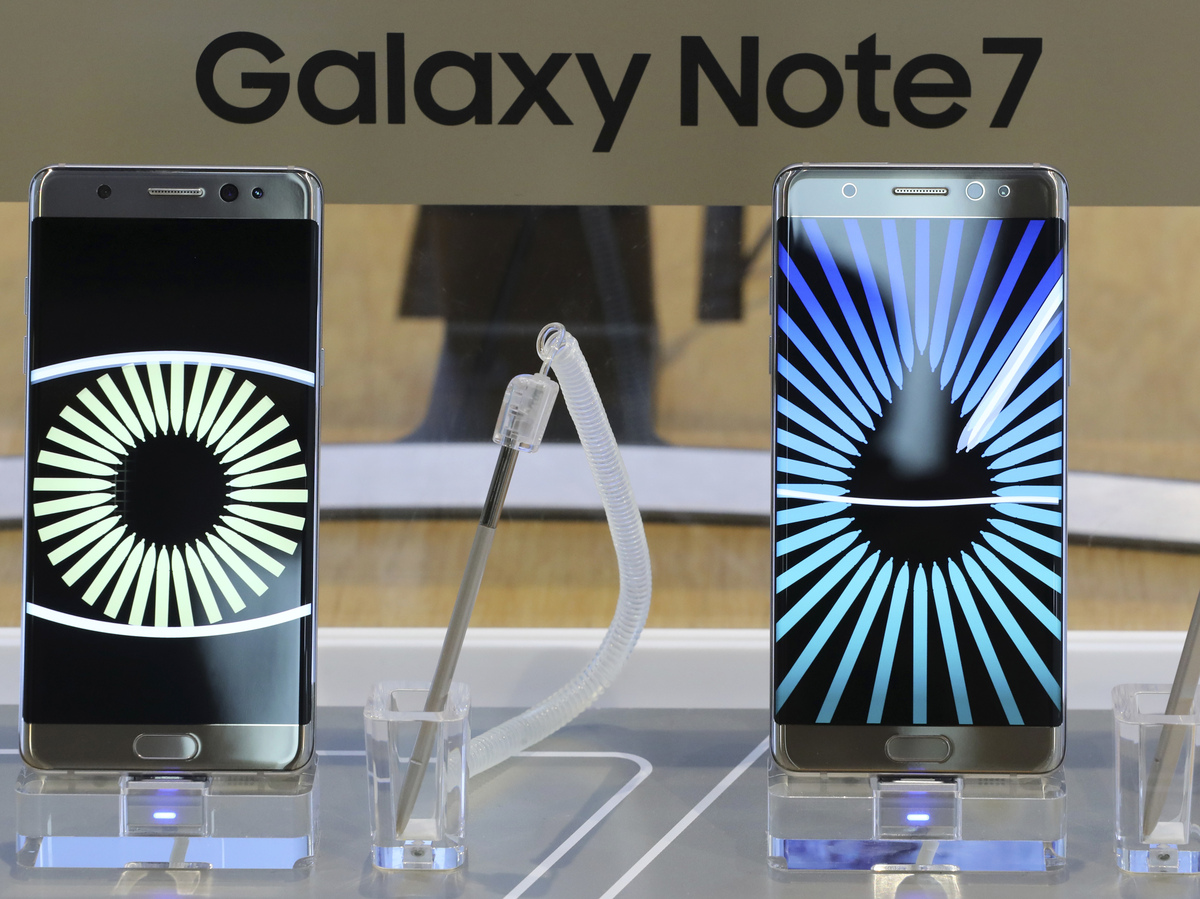 Samsung Galaxy Note 7 was a unique, critically acclaimed phone before the company had to recall every unit, including those issued as allegedly safer replacements, over risks of smoke, fire and explosions.

Now that Samsung's Galaxy Note 7s have caught fire even after the phone-maker said it had changed battery suppliers, and the real cause of overheating remains a mystery, the Korean tech giant is facing new questions about its transparency throughout the recall debacle.

It has been a week since Samsung pulled the plug on what had been slated to be its flagship high-end smartphone. Samsung began recalling the devices for posing a fire hazard a month and a half ago. Reports about the fires started coming in almost two months ago.

We still don't know what's causing the batteries to overheat.

"The challenge with all this is, you know, we don't want to say something too early," says a Samsung executive, speaking anonymously to discuss an ongoing investigation. "Obviously, we had one recall, we thought things were OK after that — they weren't. So we have to be very, very certain this time that it's clear what's going on."

The company's representatives are loath to broach anything related to the inquiry, which they say is continuing "around the clock." It's unclear whether Samsung or U.S. government engineers have been able to replicate the fires reported by users, how much testing the replacement Note 7 batteries underwent in the days before or during the recall — or what evidence pointed at batteries as the culprit to begin with.

"All of those things will have to be discussed as part of the whole investigation into what happened and what were the reasons and why did the engineers think at that point there were certain things," the Samsung executive told NPR. 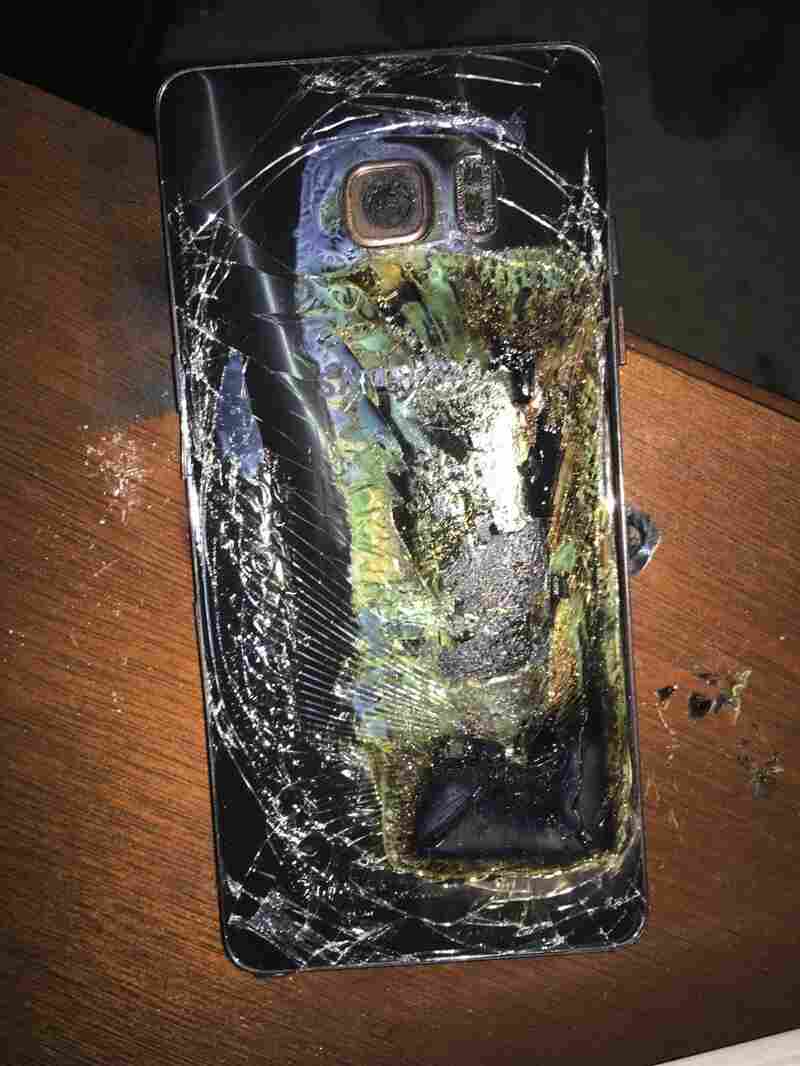 Samsung is recalling 1.9 million Galaxy Note 7 devices in the U.S., after 96 reports of the phones overheating, some of which caused burns and property damage. Shawn L. Minter/AP hide caption 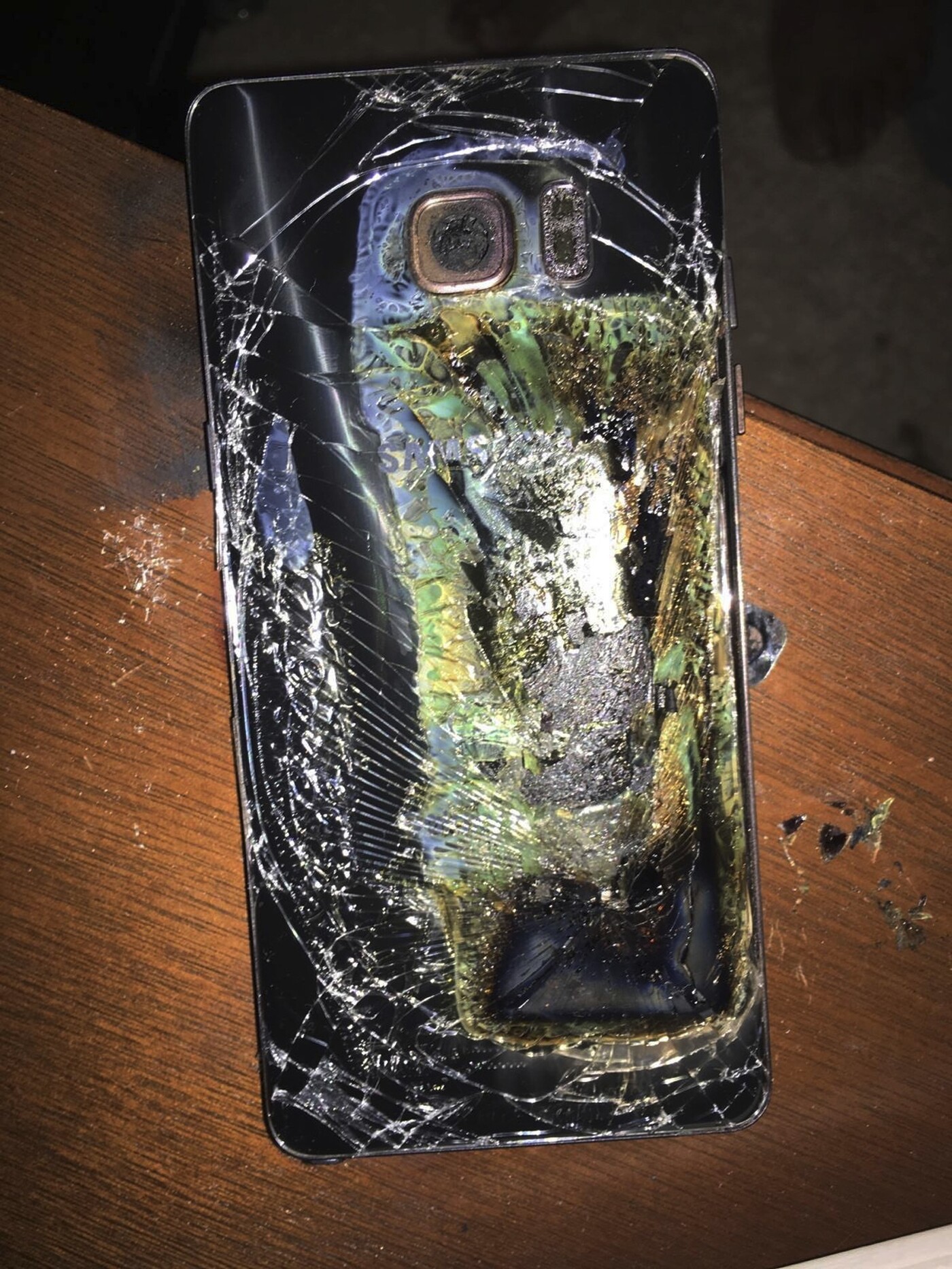 Samsung is recalling 1.9 million Galaxy Note 7 devices in the U.S., after 96 reports of the phones overheating, some of which caused burns and property damage.

"Nobody really knows what went wrong," says Avi Greengart, devices analyst at Current Analysis. "If Samsung knows, it isn't saying — and that's a problem. And if Samsung doesn't know — well, that's a whole other kind of problem."

In a way, it's a toss-up between lack of disclosure, if the problem is known, and lack of accountability, if the causes of early fire reports were unknown or misdiagnosed, but blamed on the battery supplier nonetheless.

Samsung officials say their priority is to reclaim both the original Note 7s and the updated Note 7s issued as their replacement — and to regain customers' trust. But even some South Korean customers, for whom Samsung is tied to patriotism, have expressed frustration with the company's communication throughout the ordeal.

"We will get to the bottom of the issue and find the cause," says Samsung spokeswoman Kelly Yeo. "We will do everything in our power to make what's wrong, right."

The widely floated theory suggests that Samsung's inflammable-battery woes began with the rush to beat Apple to market with the latest, most unique smartphone.

Galaxy Note 7 was that: waterproof, large, bright, with curved glass and a built-in stylus. And the company did have a precedent of success from an expedited release of another smartphone, Greengart says: Galaxy S7 had come out a month ahead of the typical 12-month cycle, producing a big jump in sales and profit.

Samsung Galaxy Note 7 Banned On Planes, Including In Checked Bags

Things, of course, took a different turn after the August release of the Note 7 — though both phones were presumably tested in the same facility, which Samsung says it has been using for some seven years.

The peculiar thing about the lab is that it belongs directly to Samsung, as the company appears to be the only major phone-maker to rely on an in-house testing facility rather than an independent one. The U.S. wireless trade association, CTIA, had certified the lab, and the group says Samsung's is "the first known issue" since the certification program began in 2008.

The first recall —2.5 million Note 7s globally, 1 million in the U.S. — followed the first wave of reports of flaming phones. In a hastily arranged Sept. 2 news conference, Samsung's mobile chief Dongjin Koh pegged the issue on "a tiny problem in the manufacturing process," and that remains the closest the company has come to identifying the cause.

I truly think that it's in Samsung's best interest at this point to have radical transparency... If you don't trust Samsung, you aren't going to buy their products and that spreads far beyond the Note.

In the U.S., Samsung didn't originally involve the recall agency, so phone carriers and retailers had to form the front line, bearing much of the brunt of explaining the problem and sorting out exchanges. One user interviewed by NPR had to make numerous trips to the store to turn in her Note 7, and when asked whom she blamed for her messy return, put the onus on her carrier.

Now, the same phone sellers have had to hunt down another 1 million Note 7s, which Samsung pushed out to replace the faulty ones and erroneously presented as safe.

"The carriers are incensed at Samsung right now," Greengart says. "If you're a retail sales rep and you've dealt with someone who's come in three times for a Note 7 — once to buy it, once to recall and once to recall the recall — you may not be likely to recommend a future Samsung product."

Representatives of U.S. phone carriers have not commented on the recall beyond encouraging Note 7 owners to stop using the devices and return them.

Among U.S. recalls, Samsung's — now at 1.9 million phones — is not that special. Recalls of replacements are relatively common, and the CPSC has had to recall dozens of millions of items in the past, including 50 million roll-up blinds and shades that had strangled children.

Samsung's 96 incident reports of overheating batteries have burned people and set things on fire but have not been deadly. And in fact, the CPSC — which first criticized Samsung's handling of the voluntary recall — is praising Samsung's ability to quickly reclaim the phones. Samsung last reported having repossessed more than 60 percent of the original faulty Note 7s.

Wells Fargo, Samsung And Volkswagen: Can A Good Name Be Restored?

But this kind of protracted and expensive stumble by the world's largest phone-maker has shaken the industry — particularly for the failures in the replacement phones, which are now at the center of many theories: Was the company reluctant to look for problems in its own hardware? Was the error in software? Was the second battery supplier rushed?

"The aversion to accepting blame at Samsung was the strongest that I've seen in any company that I've ever worked with or worked at," says Michael Kim, who worked for Samsung in South Korea in a management position, before leaving to join other tech companies. He thinks it's because many workers in Korea join Samsung with an expectation of lifelong employment.

Geoffrey Cain, author of a forthcoming book about the so-called Samsung empire, says the validity of reports about replacement Note 7s catching fire was met with skepticism inside Samsung itself. Employees told him they felt like they couldn't really touch the topic for fear of "being branded trouble-makers."

"The fact that people have to rely on rumors and hearsay even within the company to figure out what's going on just speaks to the level of secrecy and unusual secrecy that has come to typify Samsung," Cain says.

The tech giant has been working to loosen its culture and spread more power to its offices outside of South Korea, but Cain says the shift has been slow. And Greengart says, the time to change attitude is now.

"I truly think that it's in Samsung's best interest at this point to have radical transparency," he says. "Because this isn't a product problem as much as it's a brand problem. If you don't trust Samsung, you aren't going to buy their products and that spreads far beyond the Note."