Accessibility links
Peter Thiel Stands Out In Silicon Valley For Support Of Donald Trump : All Tech Considered Thiel, a billionaire investor, has caused friction in Silicon Valley, which has largely backed Hillary Clinton. But others who disagree with Thiel's views stand by his right to express them. 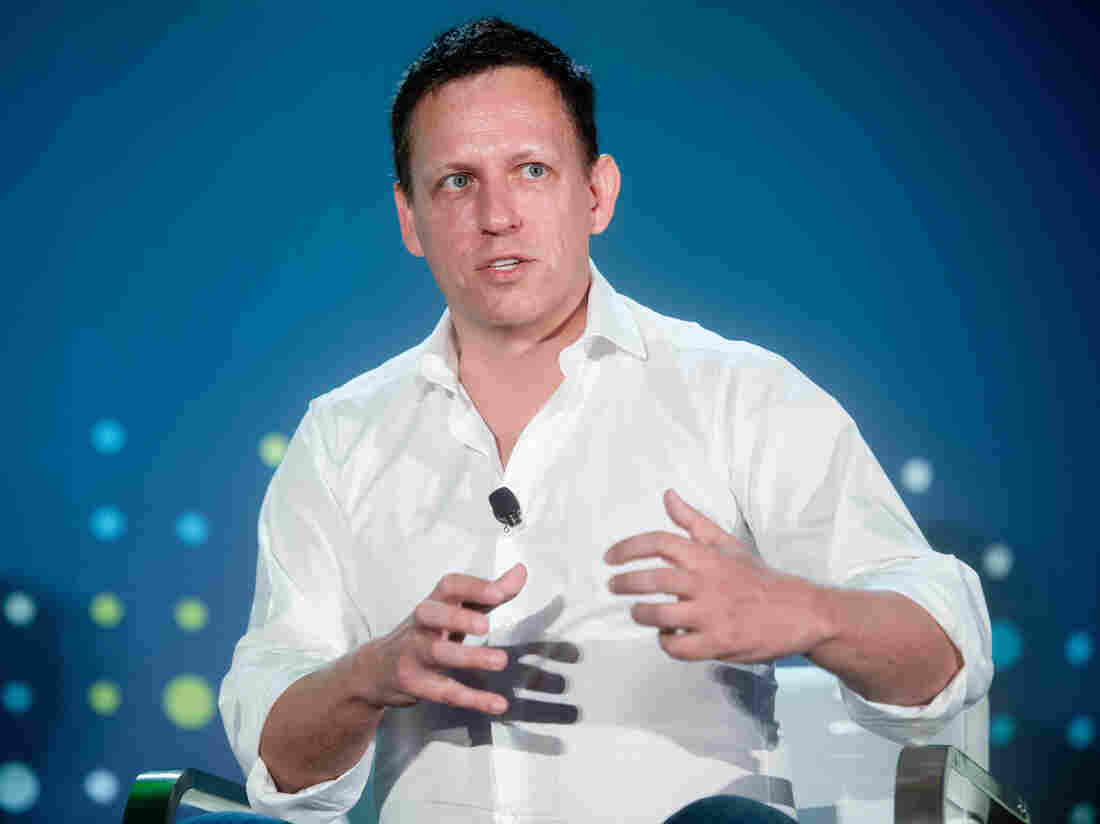 While much of Silicon Valley has supported Hillary Clinton, billionaire investor Peter Thiel is backing Donald Trump. "We're voting for Trump because we judge the leadership of our country to have failed," Thiel says. Bloomberg via Getty Images hide caption 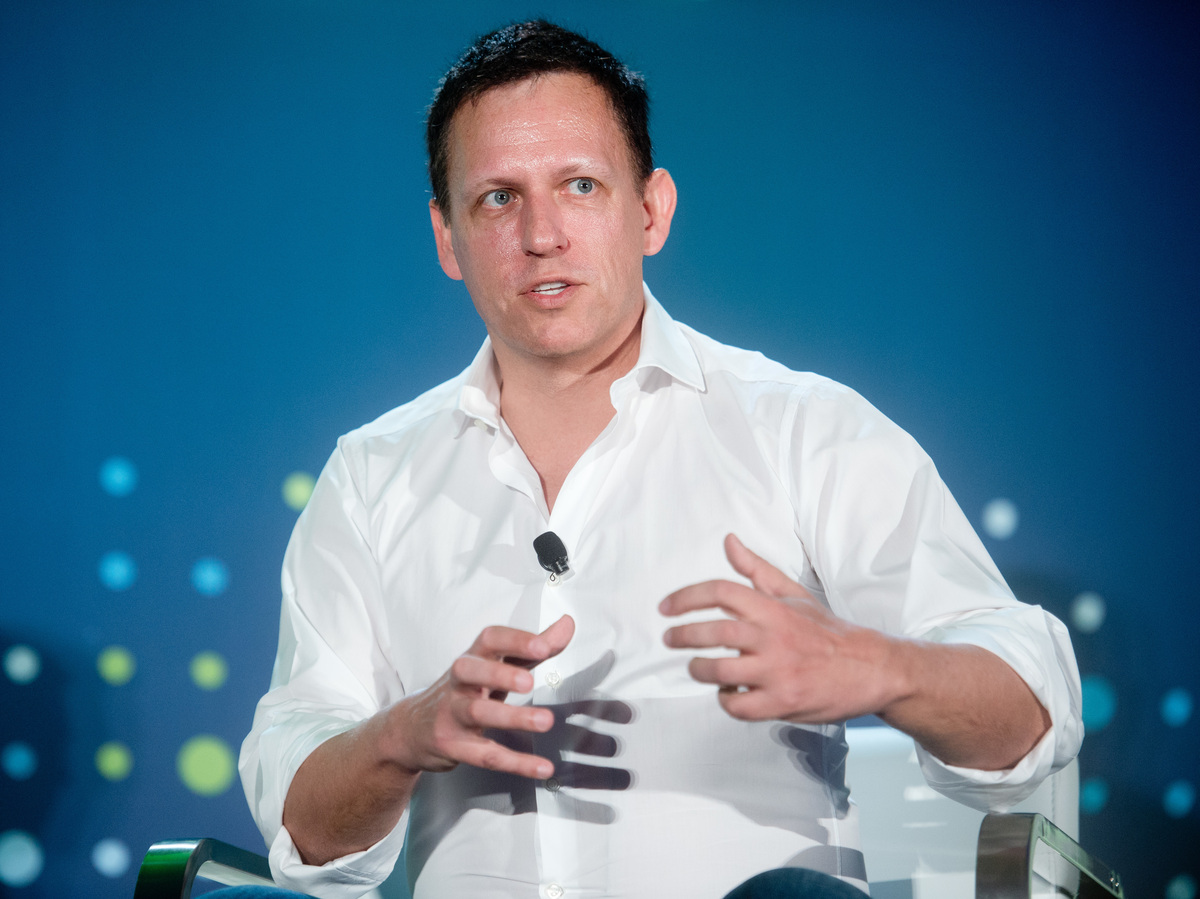 While much of Silicon Valley has supported Hillary Clinton, billionaire investor Peter Thiel is backing Donald Trump. "We're voting for Trump because we judge the leadership of our country to have failed," Thiel says.

Silicon Valley is a politically liberal place — and that is reflected in where people are sending their money this election season. Ninety-five percent of contributions from tech employees to the presidential campaigns have gone to Hillary Clinton, according to Crowdpac, a group that tracks political donations.

But one well-known outlier has caused a lot of friction in the Valley.

Peter Thiel is part of what many people in the Valley call "the PayPal mafia," a group of investors who got very rich by helping to fund PayPal. Thiel was also an early investor in Facebook and he continues to fund startups. In the left-leaning Silicon Valley, he's a self-identified Libertarian who supported Rand Paul.

Thiel's outside-the-box thinking is part of what many thought made him a smart investor. Then he came out in support of Donald Trump, and that was a bridge too far for some.

Ellen Pao, who runs Project Include, an organization aimed at diversity, stopped working with the startup incubator Y Combinator because Thiel is a part-time partner. Facebook CEO Mark Zuckerberg faced calls to get Thiel off of his board, though he has refused.

Rachel Payne, a serial entrepreneur who is currently the CEO of FEM Inc., supports those who want to cut off Thiel because Trump is no ordinary candidate. "[Trump] is inciting what I like to call thrashers — violent opposition to the gains that are being made by the formerly dispossessed or the minority populations that are finally gaining rights," she says.

Thiel once lamented the negative impact of women getting the vote and wrote that democracy and freedom are not compatible in a blog post for the libertarian Cato Institute. In a book he co-authored in 1999, Thiel said a "multicultural rape charge may indicate nothing more than a belated regret."

Thiel has since walked back on his comments about the vote and they were updated on the blog post. He also apologized for being insensitive about rape.

But, Payne says, if you have someone like Thiel involved in a startup incubator like Y Combinator it can discourage participants.

"So if you have a challenge of getting more women in tech, for example, and attracting more women as startup founders, if women believe that he is hostile to them they wouldn't be inclined to go there," she says.

On Monday at the National Press Club in Washington, D.C., Thiel defended his position. "It's not a lack of judgment that leads Americans to vote for Trump," he said. "We're voting for Trump because we judge the leadership of our country to have failed."

It's failed, Thiel said, by getting the U.S. into major costly conflicts around the world and by allowing bubbles that seriously harm the economy. Thiel went on to criticize Hillary Clinton for her hawkishness and took aim at those in Silicon Valley who have made Trump supporters feel unwelcome.

"Many people have learned to keep quiet if they dissent from the coastal bubble," Thiel said. "Louder voices have sent a message that they do not intend to tolerate the views of one half of the country."

And while many still don't agree with Thiel, they see no reason to kick him off a board or refuse to work with him. "I definitely have my own strong opinions about Trump," says Minnie Ingersoll, a founder and chief operating officer of Shift, a company that uses the Internet to help people get the best prices for their used car. "But I don't believe that we should say that we wouldn't have someone on our board who we disagree with politically."

Ingersoll says supporting Trump may be the minority view in Silicon Valley, but all opinions should be welcome. "There are 300 people who work at Shift," she says. "And some of them are going to support Trump and I need to find a way to make sure that they feel comfortable having a different opinion than I do. We still need to respect one another and respect differences of opinions."

Thiel says his political views haven't cost him financially or cost him any business relationships. In the end, it may be money, not politics, that matters most in Silicon Valley.