Accessibility links
After Divisive Election, Overwhelmed Social Media Users Unfriend, Cut Back : All Tech Considered We asked how your social media habits changed after the election. More than 150 of you replied — and most are tired, deleting apps, unfriending people, tuning out politics or worried for family ties. 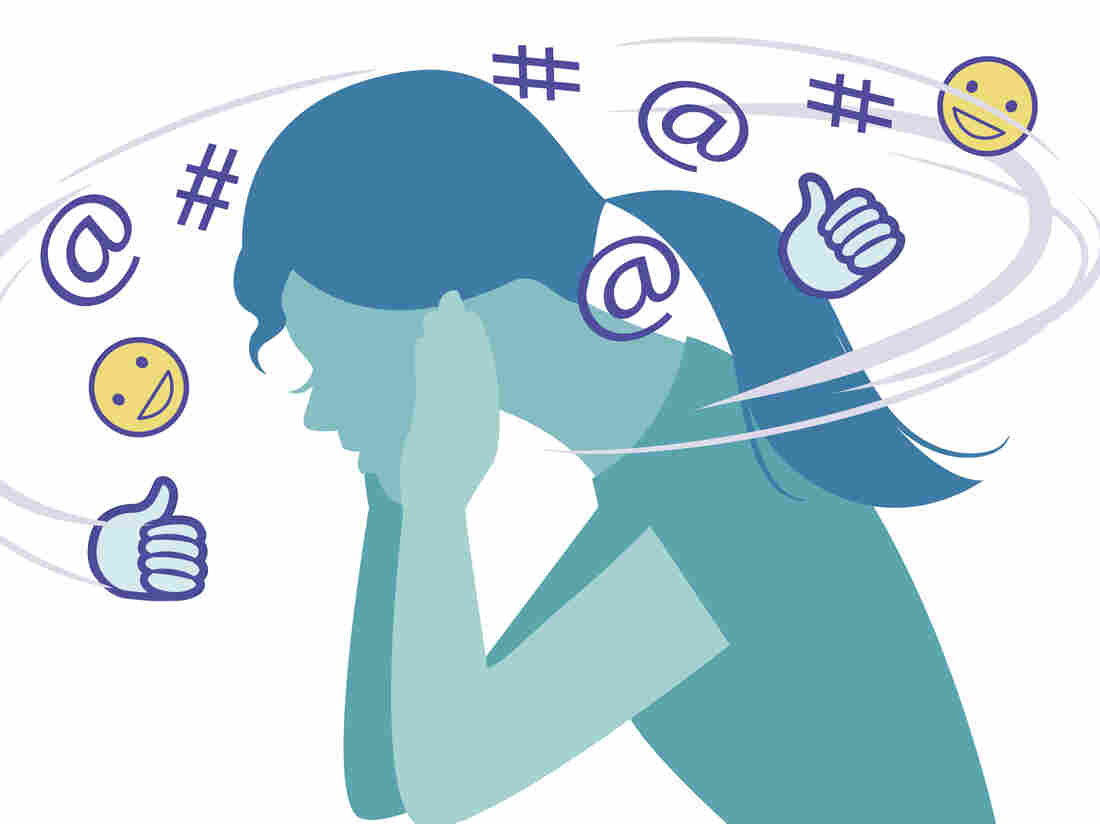 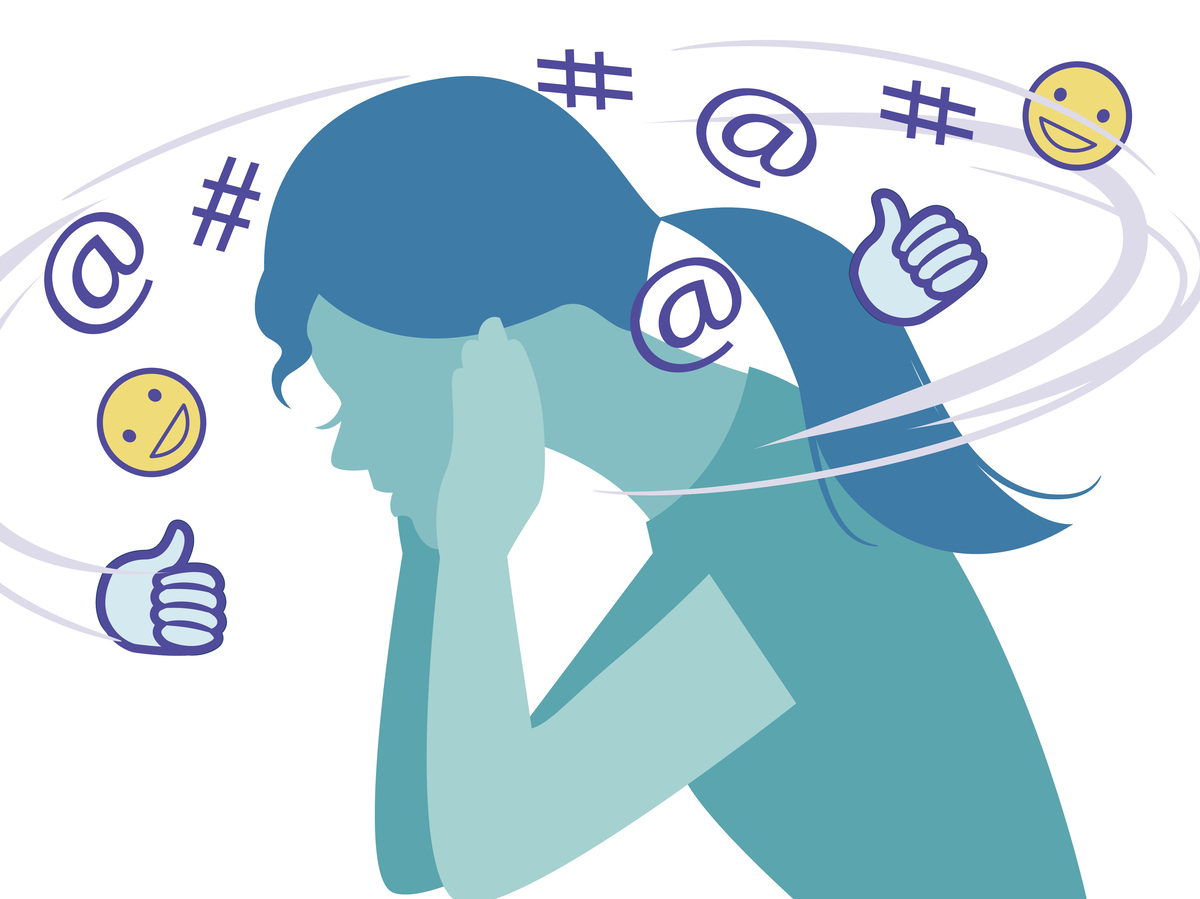 Rachael Garrity posted a farewell message on Facebook. She told her "friends" — that's how she puts it in an email to NPR, in quotes — that she would delete her account. An email from her son followed: Are you OK?

"I am finding Facebook to have a negative impact on my continuing to keep a positive feeling regarding some of the people I have known longest and cherish most," writes Garrity, who has worked in not-for-profit marketing and publishing since the 1970s.

I unfriended nearly everyone. ... I am building my own wall now.

Garrity was one of more than 150 people who have shared their stories with NPR, recapping how they are recalibrating their attitude toward social media after this year's election. Donald Trump's surprise victory ended an emotional roller-coaster of a presidential race, which has left Facebook, Google and Twitter scrambling to rein in a proliferation of fake news and harassing behavior.

"What was really shocking to me was how many people who I consider to be smart were sharing things that were not so smart, definitely obviously fake but matched whatever viewpoint that they pushed or agreed with," says Michael Lowder. He's Garrity's grandson — and he shared her story with NPR because, true to her word, she has quit Facebook, where NPR posted the call-out.

As for himself, Lowder has no plans to abandon social media, and a few people wrote in to say they are actually doubling down, regretting not speaking out more before the election, or feeling freed to speak their minds now that Trump is president-elect, or finding support in like-minded communities.

But the vast majority of emails — some of them nearing 1,000 words in length — read like testimonials to a therapist: I'm having a hard time focusing. I have questioned my friendships. I can't stop scrolling. I'm exhausted. One email to NPR ended with: "It was good to get that off my chest." People are turning off TVs (one even canceled her cable — mass media are not off the hook, either), deleting social apps from their phones, rationing time spent on Facebook and Twitter, and shrinking their digital friend lists.

Facebook felt like a summit on a frustrating, drawn-out illness, all of my friends doctors of their own dogma.

Facebook is a source of news for a majority of American adults, but in the vitriol and propaganda of the 2016 election, its proverbial public square for many users has devolved into a never-ending Thanksgiving-dinner debate — or an omnipresent Speakers' Corner. As Lowder says his father put it, opining on social media is the equivalent of shouting off a soapbox in the street: a declaration, rather than discussion.

This view, of course, cuts against the way Facebook views itself. "Friends and family come first" was said to be its guiding value in a shakeup of the news feed algorithm revealed in June.

"The day after the election, the hate and darkness got to be too much. I unfriended nearly everyone. Now I have three friends: my husband and children. ... I do hold (Facebook) responsible for helping to spread disinformation that contributed to both the election results and the level of vitriol and hate in this country. I am building my own wall now."

A similar sentiment from Todd Neigum:

"(The election) simply turned me off of Facebook. I started by unfollowing people I've known for 40 years. Neighbors, friends, family doesn't mean I have to wade through untold numbers of gloating, trashtalking, flamethrowing posts."

Much of the consternation does come from supporters of Hillary Clinton, who find themselves inundated and overwhelmed by news about a candidate they oppose. But then there are people like Tin Samuel, a tech consultant from Kansas City, Mo., who did vote for Trump.

Back in 2015, Samuel set up a second profile, splitting his closest connections from more professional ones, theoretically carving out a space to comfortably express his opinion. It hasn't worked out that way, he writes, as people who disagree with him "lob insults" and he has found he's censoring himself on both profiles:

"It's not just strangers that are engaging in this kind of behavior. It's people I've known for 20 years. ... It's one thing when you're insulted by a stranger on an NPR or CNN newsfeed. It's quite another when you're being threatened by someone who knows where you live. ...

"For the rest of the year at least, I'm going to stop talking about politics altogether online, and focus on the topics and things that I find more interesting. Technology, silly cat memes, Brazilian dance music, and food videos. You know, all that stuff the internet was always supposed to be about to begin with."

And actually, a few people have reported creating a dual presence on the platform, turning to a new profile void of political pages and opinionated friends or family. Writes health care worker Jackie Prack from Greenville, S.C.:

"The election was the last straw for me. In the days after, all I saw was hate. From both sides. ... I decided that day to get rid of my original Facebook and create my 'new' Facebook ... full of running, bikes, breweries, cat videos, satire, art, music, hiking, food, and good people. ... If the world is falling apart, my head is solidly in the sand right now ... and it's nice down here."

Rationing of social media time has been a common response, too.

Greg Jeffers, a teacher from Rowlett, Texas, describes himself as a "deeply religious" person and a social conservative — he voted for Evan McMullin, a former CIA officer who is a Mormon. Jeffers says before the election, he obsessively shared "every article I was reading on Facebook" and getting into arguments with friends and friends of friends, who as conservatives supported Trump.

Unlike many users struggling to burst or embrace ideological bubbles formed on Facebook, Jeffers faced a different challenge:

"Since (Trump) won, I realized I would have at least four more years of being ideologically separated from my tribe. I also realized that I had become a meaner, more cynical person. ...

"I decided not to totally delete Facebook. It really is a good way to stay in touch with people. But, I did decide to have my wife change my password. And I decided that I would allow myself an hour a week (30 minutes on Saturday and 30 minutes on Tuesday or Wednesday) to peruse Facebook and stay caught up."

Jeffers writes that he's thinking of shifting his time from Facebook arguments to something practical, spending time with his wife and daughters, his students, his church family. "Maybe I can, through my church, teach ESL to refugees," he writes.

And then there's Emily Prymula from Wadsworth, Ill., who says, in her rebound from social media overdose, she began researching how to run for local elected office: "I can't make a difference or change someone's opinion through a Facebook discussion, but I can do so through being present in my community."

She describes herself as an independent, which she says turned her news feed into an "ideological battleground":

"Facebook felt like a summit on a frustrating, drawn-out illness, all of my friends doctors of their own dogma, trying to convince one another that their preferred course of treatment had less severe side effects and a better long-term outcome for the patient. ... I turned off my notifications, and vowed to only post positive news about my life for my family and friends."

"There is a reason that voting is anonymous: so it doesn't destroy your ability to live with your neighbors. As their neighbor I know less about them than I do as their (Facebook) friend, and maybe that's the way it is supposed to be with your neighbors and coworkers, etc."

But of course, many emails make the counter-point: "Let's be honest, most political conversation happens on social media these days ... for better or for worse," writes Carmen Jenkins, who describes herself as a moderate, pro-life, anti-Trump Republican.

"If I want to have a voice in this conversation, I better engage," she says. "I better engage in a way that promotes dialogue rather than shutting it down with judgments and generalizations."

How effective Jenkins and others like her will be just might determine how social media shapes up (is it too soon to say this?) for the next election.