Accessibility links
Fake News Or Real? How To Self-Check The News And Get The Facts : All Tech Considered Your friend shares a story on Facebook. You read the headline and you think it's too good to be true, but it looks like it's from a news site. Experts offer tips to help you sniff out fact from fake. 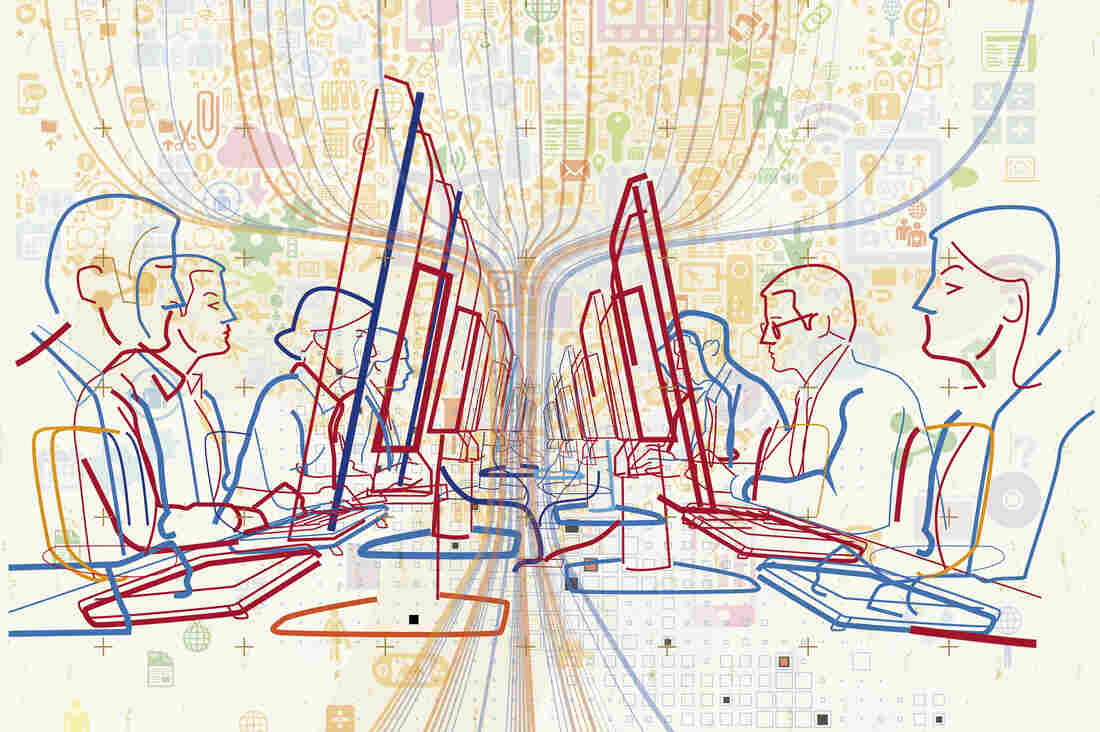 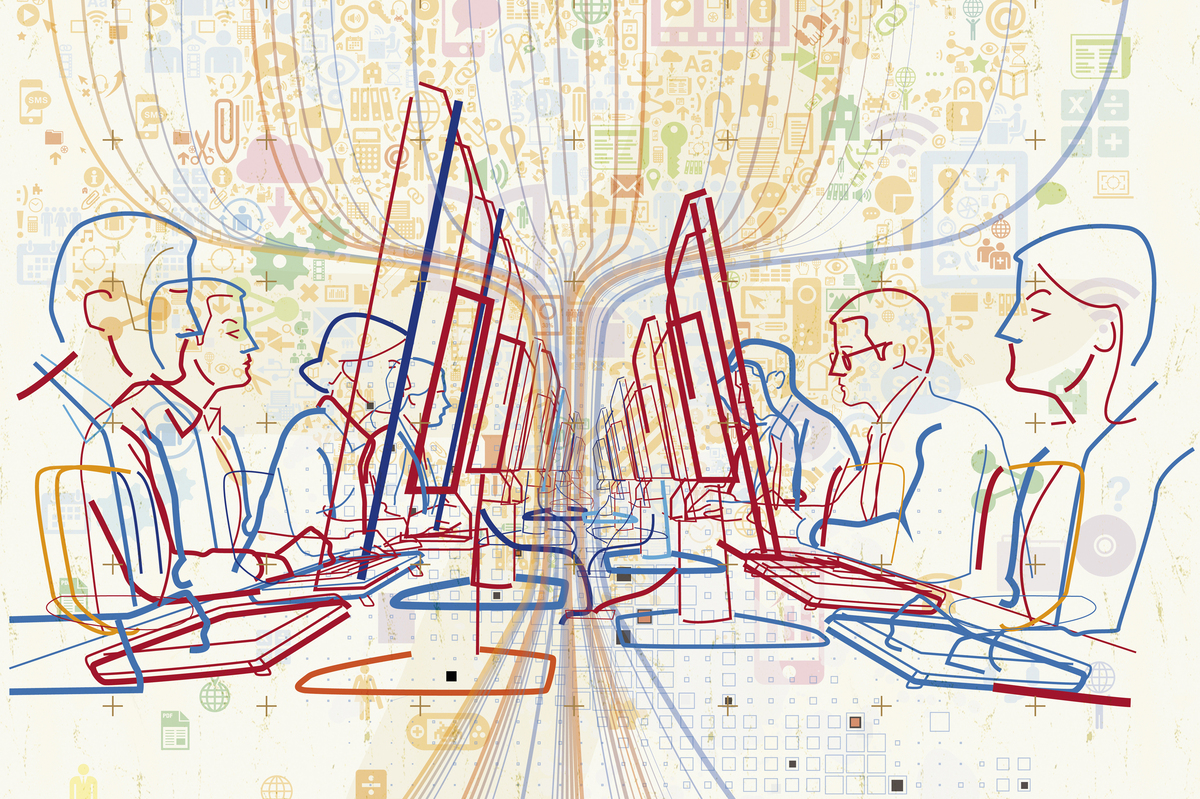 Fake news stories can have real-life consequences. On Sunday, police said a man with a rifle who claimed to be "self-investigating" a baseless online conspiracy theory entered a Washington, D.C., pizzeria and fired the weapon inside the restaurant.

So, yes, fake news is a big problem.

These stories have gotten a lot of attention, with headlines claiming Pope Francis endorsed Donald Trump in November's election and sites like American News sharing misleading stories or taking quotes out of context. And when sites like DC Gazette share stories about people who allegedly investigated the Clinton family being found dead, the stories go viral and some people believe them. Again, these stories are not true in any way.

Stopping the proliferation of fake news isn't just the responsibility of the platforms used to spread it. Those who consume news also need to find ways of determining if what they're reading is true. We offer several tips below.

The idea is that people should have a fundamental sense of media literacy. And based on a study recently released by Stanford University researchers, many people don't.

Sam Wineburg, a professor of education and history at Stanford and the lead author of the study, said a solution is for all readers to read like fact checkers. But how do fact checkers do their job?

Alexios Mantzarlis, director of the International Fact-Checking Network at Poynter, says fact checkers have a process for each claim they deal with.

"You'll isolate a claim that has something that can be objectively verified, you will seek the best primary sources in that topic. Find whether they match or refute or prove the claim being made, and then present with all limitations the data and what the data says about the claim being made," Mantzarlis says.

That's the framework for professionals, but there are ways for everyone to do a bit of fact checking themselves.

Melissa Zimdars is an assistant professor of communication and media at Merrimack College in North Andover, Mass. When she saw her students referencing questionable sources, she created and shared a document with them of how to think about sources, as well as a list of misleading, satirical and fake sites.

Both Mantzarlis and Zimdars agreed there are a few best practices people can use when reading articles online.

Pay attention to the domain and URL

For Advertisers, Fake News Is Not The Biggest Problem

Established news organizations usually own their domains and they have a standard look that you are probably familiar with. Sites with such endings like .com.co should make you raise your eyebrows and tip you off that you need to dig around more to see if they can be trusted. This is true even when the site looks professional and has semi-recognizable logos. For example, abcnews.com is a legitimate news source, but abcnews.com.co is not, despite its similar appearance.

Read the "About Us" section

Most sites will have a lot of information about the news outlet, the company that runs it, members of leadership, and the mission and ethics statement behind an organization. The language used here is straightforward. If it's melodramatic and seems overblown, you should be skeptical. Also, you should be able to find out more information about the organization's leaders in places other than that site.

Look at the quotes in a story

Or rather, look at the lack of quotes. Most publications have multiple sources in each story who are professionals and have expertise in the fields they talk about. If it's a serious or controversial issue, there are more likely to be quotes — and lots of them. Look for professors or other academics who can speak to the research they've done. And if they are talking about research, look up those studies.

Look at who said them

Then, see who said the quotes, and what they said. Are they a reputable source with a title that you can verify through a quick Google search? Say you're looking at a story and it says President Obama said he wanted to take everyone's guns away. And then there's a quote. Obama is an official who has almost everything he says recorded and archived. There are transcripts for pretty much any address or speech he has given. Google those quotes. See what the speech was about, who he was addressing and when it happened. Even if he did an exclusive interview with a publication, that same quote will be referenced in other stories, saying he said it while talking to the original publication.

A lot of these fake and misleading stories are shared on social media platforms. Headlines are meant to get the reader's attention, but they're also supposed to accurately reflect what the story is about. Lately, that hasn't been the case. Headlines often will be written in exaggerated language with the intention of being misleading and then attached to stories that are about a completely different topic or just not true. These stories usually generate a lot of comments on Facebook or Twitter. If a lot of these comments call out the article for being fake or misleading, it probably is.

A picture should be accurate in illustrating what the story is about. This often doesn't happen. If people who write these fake news stories don't even leave their homes or interview anyone for the stories, it's unlikely they take their own pictures. Do a little detective work and reverse search for the image on Google. You can do this by right-clicking on the image and choosing to search Google for it. If the image is appearing on a lot of stories about many different topics, there's a good chance it's not actually an image of what it says it was on the first story.

These tips are just a start at determining what type of news an article is. Zimdars outlined these and others in a guide for her students.

And you won't be the only one trying to stop the spread of this false content. The company leaders behind the platforms these stories are shared on are trying to figure out how to fix the issue from their side, but they are also trying to make sure not to limit anyone's right to freedom of speech. It's a tricky position to be in, but they've said they'll try. In the end, it really does depend on taking responsibility and being an engaged consumer of news.

Here's one last thing. Satirical publications exist and serve a purpose, but are clearly labeled as exaggerated and humorous by the writers and owners. Some of the more well-known ones like The Onion and ClickHole use satire to talk about current events. If people don't understand that, they might share these articles after reading them in the literal sense.

If this happens or if you see your friends sharing blatantly fake news, be a friend and kindly tell them it's not real. Don't shy away from these conversations even if they might be uncomfortable. As said, everyone has to help fix the fake news problem.