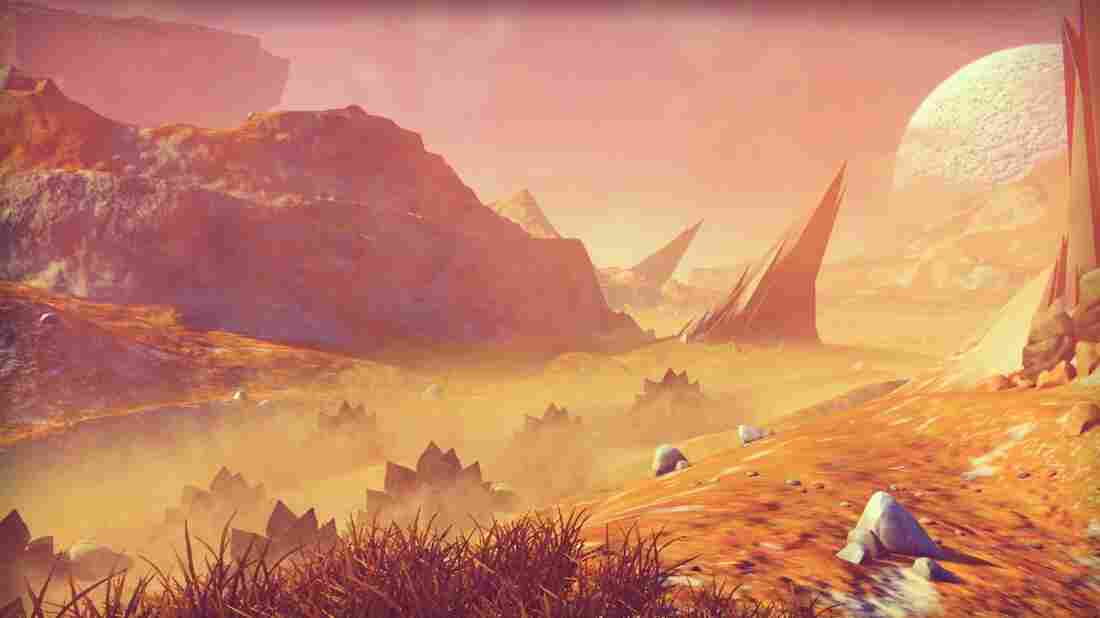 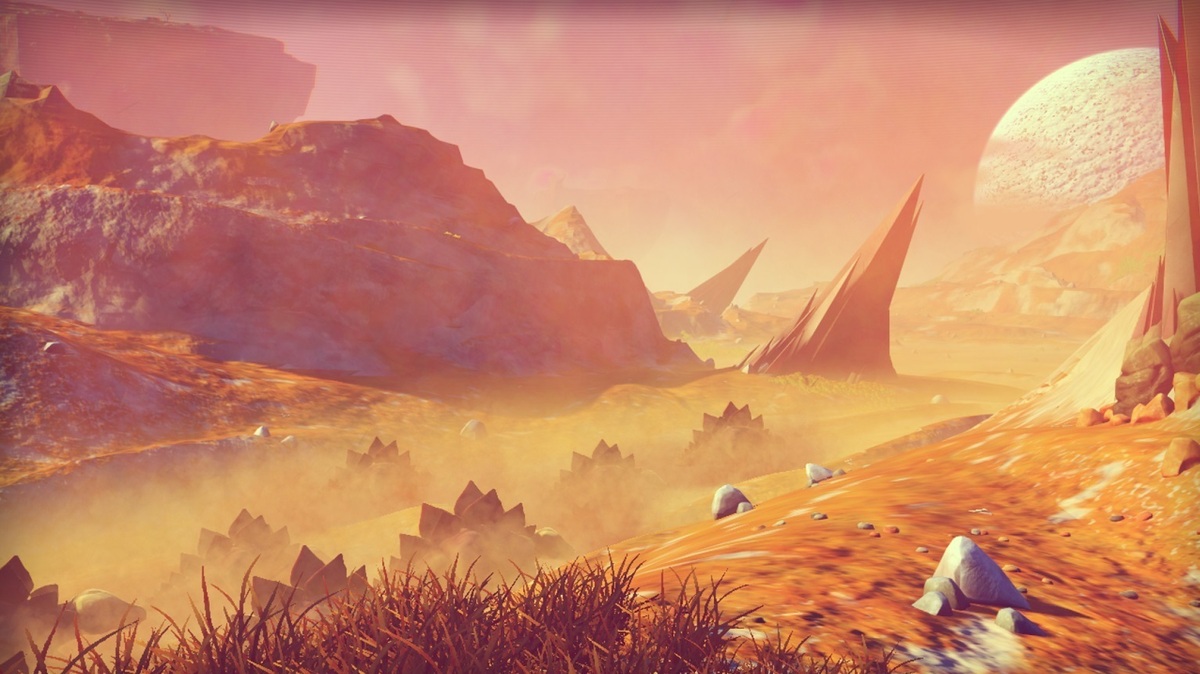 For years now, some of the best, wildest, most moving or revealing stories we've been telling ourselves have come not from books, movies or TV, but from video games. So we're starting an occasional series, Reading The Game, in which we take a look at some of these games from a literary perspective.

In the beginning, I breathed only methane.

Exploring The 'Universe' In A Video Game

Seeded onto a pinkish and poisoned world of scouring winds, I stumbled from my broken spaceship, unsure of my footing or anything else. I saw strange plants moving, the stalagmite spikes of ore deposits like plutonium fangs, the wreckage of my crash, dust. When I moved, I heard nothing but the crunch of my heavy boots and the occasional chime from my spacesuit — followed, always, by the weirdly autotuned computer voice in my ear saying, "Environmental protection falling ..." And hers was the only human voice left to speak in the whole of this impossible universe.

And I was hooked.

No Man's Sky (released in its original form in August of 2016 by indie studio Hello Games, and updated just a couple weeks ago) is a bauble, an amazement that borders on magical in its opening hours, becomes almost hypnotically comfortable at a certain point, then simply majestic in its scope and incomprehensible size. It is, at its most elemental, a procedurally generated universe in a box — one containing 18 quintillion planets, all unique, all created, sculpted and populated by nothing more than random numbers and some math. Because of this hugeness, it is a lonely game. Land on a planet and it is yours alone. Land on ten, twenty, a hundred, and you will likely never see anything more than the traces left behind by other amateur spacemen who came this way before you. But the loneliness is part of the point of it. It is a game created to make you feel small in the face of the (nearly) infinite.

On the one side, there's the built-in story of the game, which is just terrible ... But on the other hand, it is also the best game I have ever experienced for self-generating storytelling.

So as I play, I do so in a universe empty of man. Or at least so close to empty that the difference between truth and the fiction I am building in my head is statistically null. No Man's Sky comes in at polar ends of a long narrative spectrum. On the one side, there's the built-in story of the game, which is just terrible. At worst, it is incomprehensible spacey-spaceman gibberish about ancient civilizations and lost artifacts. And at it's best, it ain't much better — failing on many basic levels to tell a meta-story about the in-game universe being a simulation (which, you know, it is) where the player (also called "the Traveler") is tasked by its creator to explore his way to the center of everything, essentially making the player a kind of galactic-level landlord checking in on all the tenants.

But on the other hand, it is also the best game I have ever experienced for self-generating storytelling. To crack the hissing cockpit of my spaceship and peek out through the trees of an alien forest, to run from robots or watch herds of galloping slugs running across the plains of a sulfur-colored desert — these are experiences made for children of the Dark Ages who gobbled pulp sci-fi like candy and lay back on cold hills, staring up into the star-filled sky and dreaming of what was out there; for dreamy-eyed geeks who've never wanted for anything so much as they have for a spaceship, a jetpack, a ray gun and unlimited horizons. The only human in the universe, I played in a silence that was nearly complete, and loved No Man's Sky precisely for its emptiness and for the way that even the few aliens I ran into spoke no language I knew.

Granted, this changes. You learn words. You upgrade your stuff. If you're me, you ignore the skeleton construct of the game's story and simply roam. With the new update, I was suddenly granted the ability to build bases, to run freighters between stars, but that almost felt like work and I just shrugged and ignored most of it for the joys of simply romping around the 'verse, telling myself stories that were better than anything that lived within the construct of the game's narrative.

No Man's Sky does not tell a great story, but it contains multitudes of them.

I could spend days hunting for just the right beach, the right view, or playing alien zoologist, meticulously cataloguing the chicken-headed space dinosaurs on one world, then scare myself half to death by stumbling upon sea monsters at the bottom of a shallow, purple sea, jump into my ship, blast off, run from some pirates, and be bounding through the snows of an ice planet ten minutes later. The quest for the center of the universe, for the end-game of No Man's Sky's story, was far less interesting than the small, quiet, private stories that lived over every hill and horizon on every new world I discovered.

No Man's Sky does not tell a great story, but it contains multitudes of them. And any time it begins to grow dull or rote or predictable, all I have to do is look up, into the starry sky, and wonder what else might be out there.

And then go find out for myself.