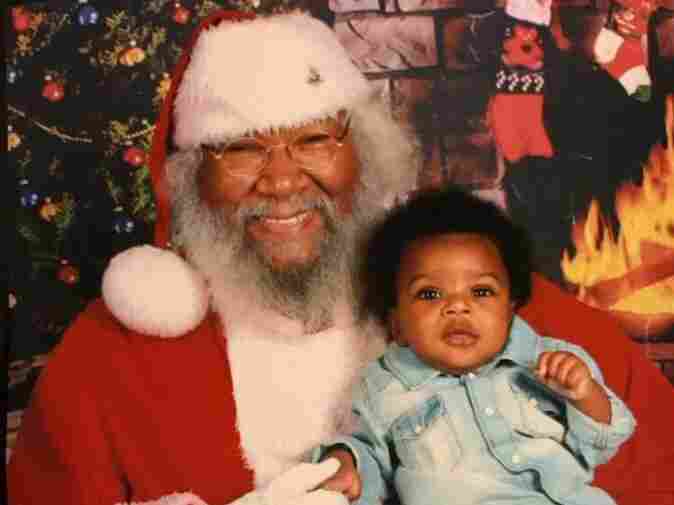 Generation after generation has sat in the lap of this Santa Claus. This year baby Michael Sykes IV got a portrait with New Orleans' Seventh Ward Santa. Courtesy of Taya Thomas and Michael Sykes III hide caption

Generation after generation has sat in the lap of this Santa Claus. This year baby Michael Sykes IV got a portrait with New Orleans' Seventh Ward Santa.

Twitter has a theory about Santa Claus — he might be a lot farther south than the North Pole.

The tweet that started it all came from an account dedicated to celebrating "everything NOLA." It featured a photo of Santa, holding a baby as he does, and a caption: "If you're from New Orleans 9/10 you got pic with this Santa."

If you're from New Orleans 9/10 you got pic with this Santa 😂 pic.twitter.com/4YHeDoQPQV

One look at the responses makes it obvious that the caption was not at all an exaggeration.

Black Santa Claus Is A Hit At Mall Of America, But Faces An Online Backlash

Thousands of people have shared and replied to the tweet — as scores of New Orleans natives are posting their pictures on the same Santa's lap.

According to The New Orleans Advocate, Parker has been Santa for 46 years.

Even before he was officially Santa, Parker was known for spreading Christmas cheer. NOLA.com reports that he was once a school bus driver who would treat a busload of kids to a meal at McDonald's on the last day of school before Christmas break.

The Seventh Ward Santa has been around for so long that countless people who once posed with him as kids are now old enough to bring him their own children and even their grandchildren.

@504Reminisce my cousin when she was younger and now her daughter (i got permission to share) 20+ years in the game 😭 pic.twitter.com/Qqf6bG6NJJ

@504Reminisce I honestly don't know where my pictures are with this Santa, so here's my nephew. 😂 pic.twitter.com/oeqje5fQ2W

For those reminiscing on Twitter, it didn't take long to notice a recurring theme: The famous New Orleans Santa doesn't seem to age.

Here's a photo from the 1980s — according to the caption, the child in the photo is now 30 years old.

@504Reminisce it's crazy cause that's true. and this was '98. pic.twitter.com/7TbYMixz6z

If you're from New Orleans 9/10 you got pic with this Santa 😂 pic.twitter.com/4YHeDoQPQV

@504Reminisce im looking at this thread thinking this guy might be the real Santa pic.twitter.com/QUgWAouN6s

They might be on to something. (See more of the photos of the Seventh Ward Santa over the years by scrolling through the Twitter thread here.)