Accessibility links
In Social Media Age, Young Cops Get Trained For Real-Life Conversation : All Tech Considered Some police officials say their millennial-aged recruits are so used to communicating using social media that they need training in talking with people face to face. 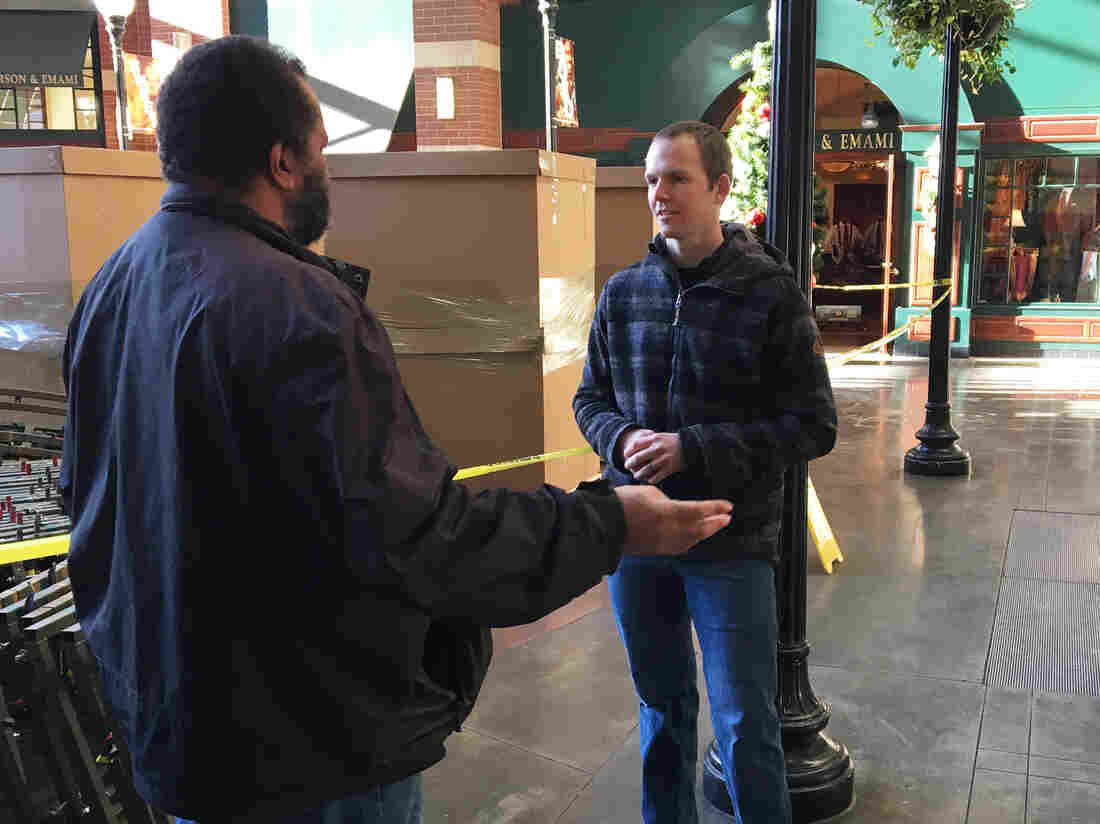 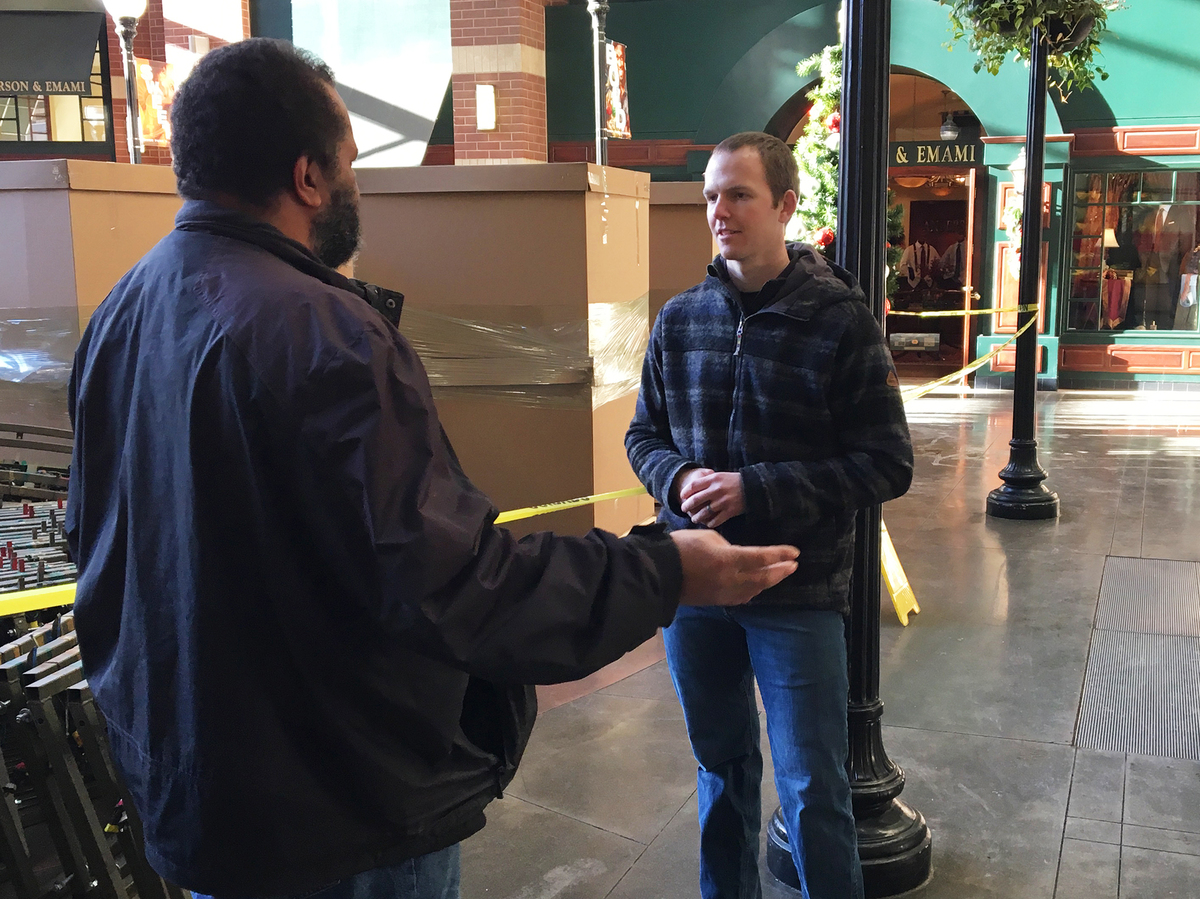 Newly hired Spokane County Sheriff's Deputy Russell Aldrich chats with strangers in a shopping mall. The exercise is meant to help rookies build up the subtle people skills that older police trainers claim are lacking among many millennial recruits.

Sgt. Marty Tucker thinks millennials have trouble talking to strangers. Tucker runs training for the Sheriff's Office in Spokane, Wash., and he says new recruits seem inhibited when making face-to-face contacts with members of the public.

"They're so stressed out about making contact that they don't think about anything else," he says. "So they get up there, and then they'll freeze up."

In a job that depends on good communication skills, Tucker says this is a huge problem. And Tucker isn't alone. For the past few years, police administrators and trainers have become increasingly vocal about what they see as a major shortcoming of young law enforcement recruits.

"I wouldn't say they're a different breed," says Thom Dworak, a retired police sergeant in suburban Chicago who now works as a police trainer. "But I had a field training class two weeks ago that was primarily older millennials, on the job five to eight years, and they're even whining about the new ones coming in."

Police Say High-Profile Fatalities, Protests Have Made Their Jobs Harder

The problem, say trainers like Dworak, is that millennials conduct so much of their social interactions digitally that they don't have as much experience reading people's body cues. Dworak says when he was growing up, "if you had problems with your friend, you discussed it in the alley." Millennials discuss things online; but those online skills don't help much when dealing with the public out on the street.

That's why the Spokane Sheriff's Office now puts new hires through a kind of remedial people-skills class. Anthony Anderman set up the training, which requires rookies to walk around a shopping mall and a bus station, trying to engage strangers in conversation.

As he watches the deputies chatting with people, Anderman explains that the purpose of the exercise is to work on things like body language and to practice "reading" people before making contact.

"So that way when they walk up to them and actually speak to them, they have some sort of an idea of whom they're running into," he says. "If they get their pre-planning incorrect, or close, they then learn how to adapt their communication and body language."

After each conversation, field training officers pull the deputies aside to review small things, such as the deputies' hand gestures, eye contact, even the sincerity of their smiles.

Roaming the mall in search of strangers to chat up, new Deputy Russell Aldrich says he's developing strategies for "pre-planning" his conversations.

"Usually I'm looking at what they're wearing, if they have a logo hat or something," he says. "Then you can go up and start talking about that sports team to relax them a little bit."

Or, he says, "you can talk about the weather."

Some might think these people skills don't need to be taught, but Aldrich and the other young deputies seem to take the lessons seriously.

"I see the millennial thing a little bit," Aldrich says. He's noticed how much time people of his generation spend conversing online.

"Even through the [police] academy, watching some of our classmates, how they interacted with other people, some of them were interacting through Snapchat, and that is how they communicate with each other."

But not everyone is ready to blame millennials and their social media.

"I don't know if I completely buy into that particular assessment," says Shawn Weil, a cognitive scientist with a company called Aptima.

It did research for the Pentagon on how to strengthen the conversational skills of soldiers and Marines. That research is the basis for the training being given to the deputies in Spokane, and Aptima is now developing video-based tools to help police improve their interaction skills. Weil says some people need to be taught those skills, but he wouldn't single out one particular generation.

"I've met plenty of folks who are millennial in their generation who have fine social interaction skills and certainly plenty of people who are [Generation] X or baby boomers who can't give me eye contact," he says.

What's important, Weil says, is to help police understand how small gestures and conversational styles are just as important in their daily work as in other social jobs, such as sales or journalism.

That's because soldiers and cops carry guns — and wear uniforms. And in fact, in Spokane, the trainers have deputies approach people first in plain clothes, then in uniform, so they can see how it changes things. Cops also have to try to seem approachable while at the same time staying alert for possible threats — making body language that much more complicated.

Back at the mall, Tony Anderman watches his deputies, critiquing their performance.

"He still has his hands in his pockets, he's bringing it out, kind of talking," Anderman says. "He's relaxed, now the pedestrian is starting to talk with their hands."

It's a small thing — someone mirroring someone else's hand gestures. But to Anderman's trained eye, it's the sign of a respectful, informative interaction. And regardless of generation gaps, he thinks it's a small thing that all cops should understand.