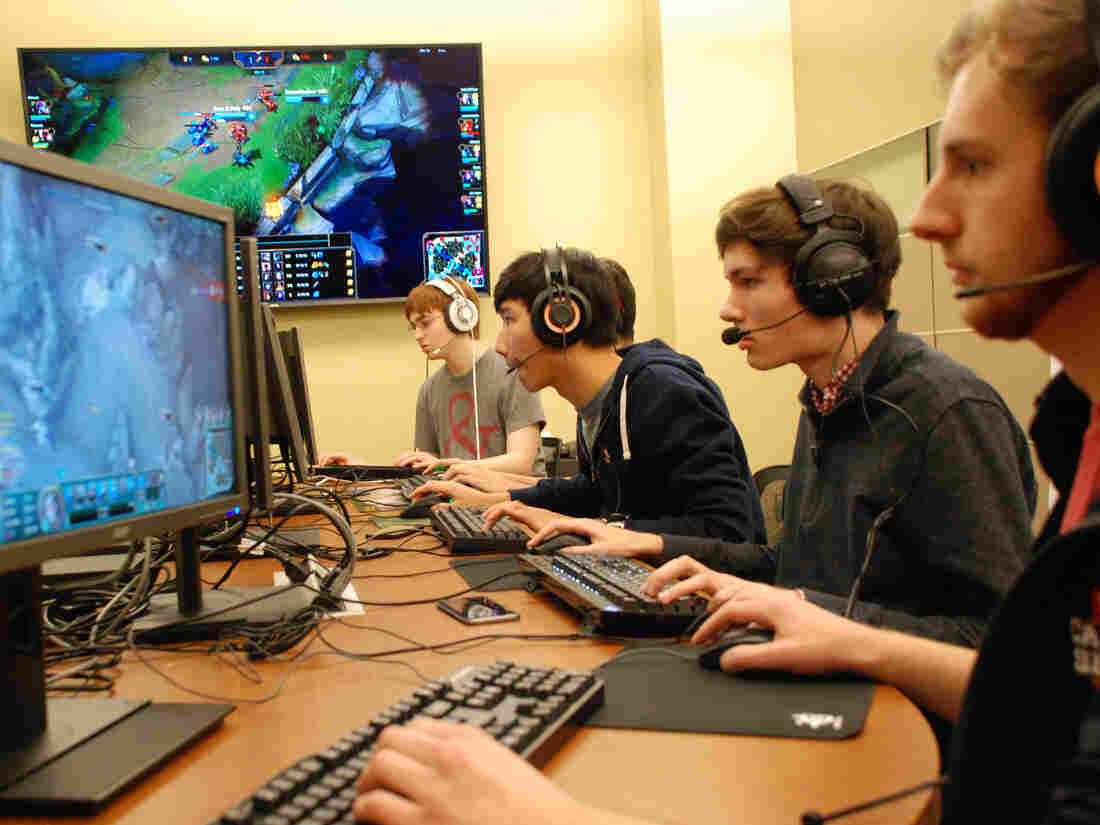 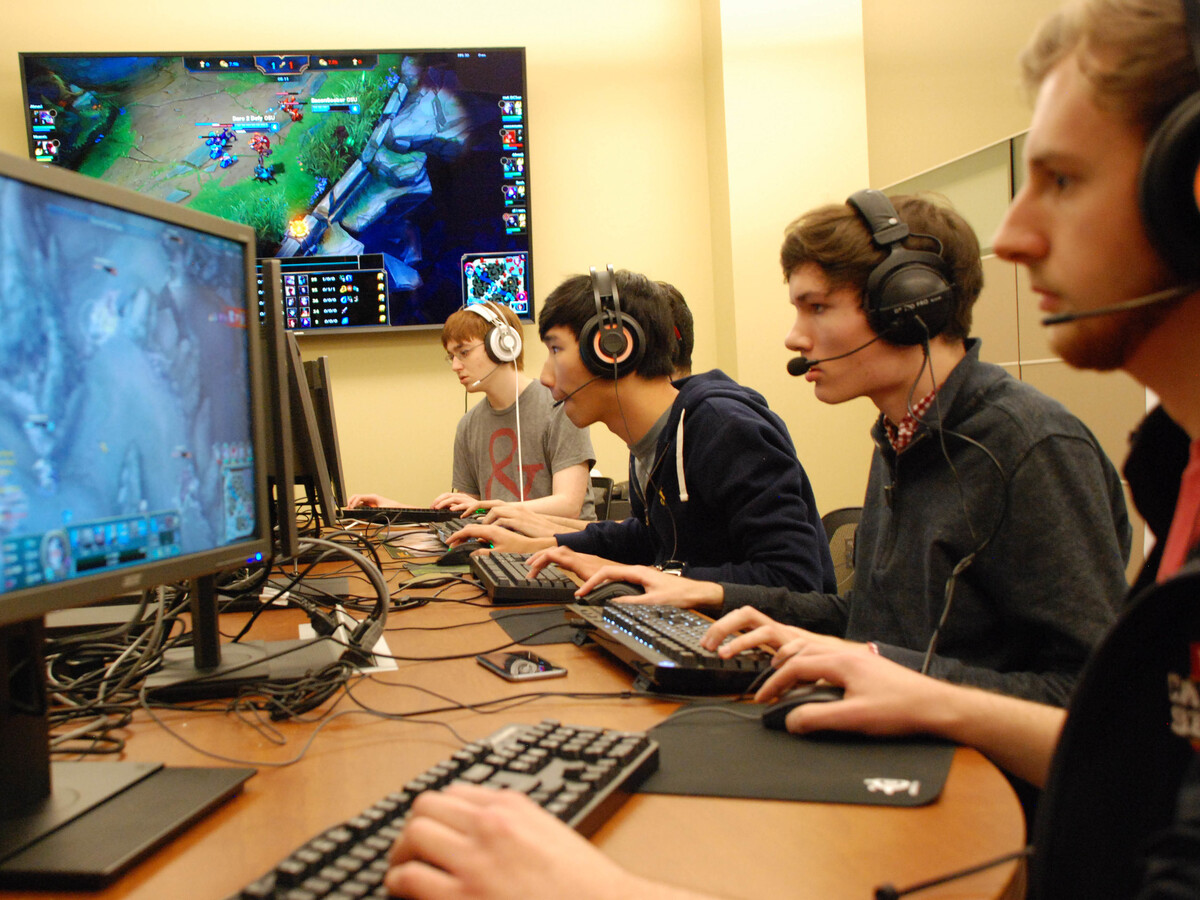 Members of the Ohio State team practice for an upcoming Big Ten League tournament for League of Legends.

Lined up at a row of computers, five Ohio State University students stare intently at their screens amid the clatter of keyboards and mouse clicks. They're keeping in shape — so to speak.

Ohio State, along with 11 other colleges, is in the middle of the first-ever Big Ten tournament for League of Legends, one of the most popular e-sports in the world. That partnership — between the country's oldest Division I athletic conference and League of Legends maker Riot Games — shows how far e-sports have come into the mainstream.

Be A Varsity Player ... In Video Games?

With a 2-0 record so far, though, Ohio State still has a lot to prove — to their school, as much as to themselves.

Though this Tuesday evening game is just a scrimmage, the team's no less engaged. The battle unfolds on a 52-inch television above the table as the coach, manager and a small group of IT personnel look on.

"Varus is moving up!" one player says into his headset. "Hit this one," another calls out, signaling a teammate.

In competitive League of Legends games, two teams of five players face off on a standardized battlefield, trying to destroy each other's base first. Each player takes control of one "champion," a fantasy character with specific abilities and personality.

League of Legends currently boasts some 134 different champions, and constantly changes their stats. Nicolas Re, an Ohio State senior and the team's manager, says this makes the game a difficult one to perfect.

"The saying is, to master a champ, play a thousand games on them," Re says.

Connor McDougall, who leads the Michigan State University team, says that investment also keeps players coming back — and away from other e-sports.

"It took me so long to get good, so I could never switch to another game," he says.

Ohio State practices together three times a week for three hours, with each game taking around 40 minutes to play. Michigan State maintains a similar schedule. That's in addition to weekend matches and what players do in their own time — some members, Re says, have racked up over 3,000 hours of gameplay.

To compete nationally, players need to develop technical skills and reflex. Re likens the best players, who can become famous in their own right, to basketball stars.

"Someone knows how to shoot a free throw, but they may not have a good free throw percentage — they might only shoot four out of 10," Re says. "We're looking for someone that can shoot like nine or 10 free throws."

Getting ready for the tournament requires more than just scrimmages, though. Ohio State's team scrutinizes videos of their own matches, and livestreams other teams' matches, to find the weak points in their formations and think strategically about their upcoming opponents.

"You need to build strong communication and feedback platforms to work with your team so that team cohesion is really strong," says Michael Sherman of Riot Games.

"A lot of that is just finding the best players that aren't terrible people," McDougall says, laughing.

Culminating in a head-to-head final hosted at the Riot headquarters in Los Angeles, the Big Ten matches will be streamed live online, as well as help fuel Riot Games' constant churn of League-related content. After all, this tournament didn't come out of nowhere. 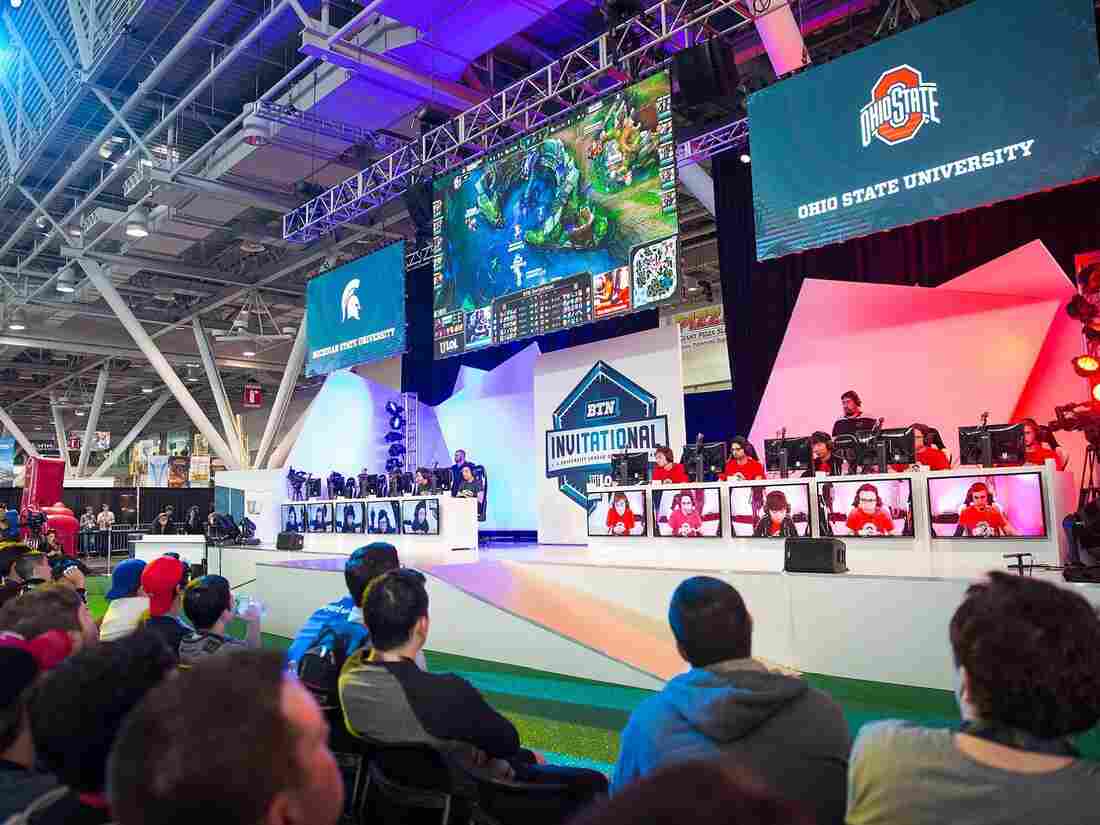 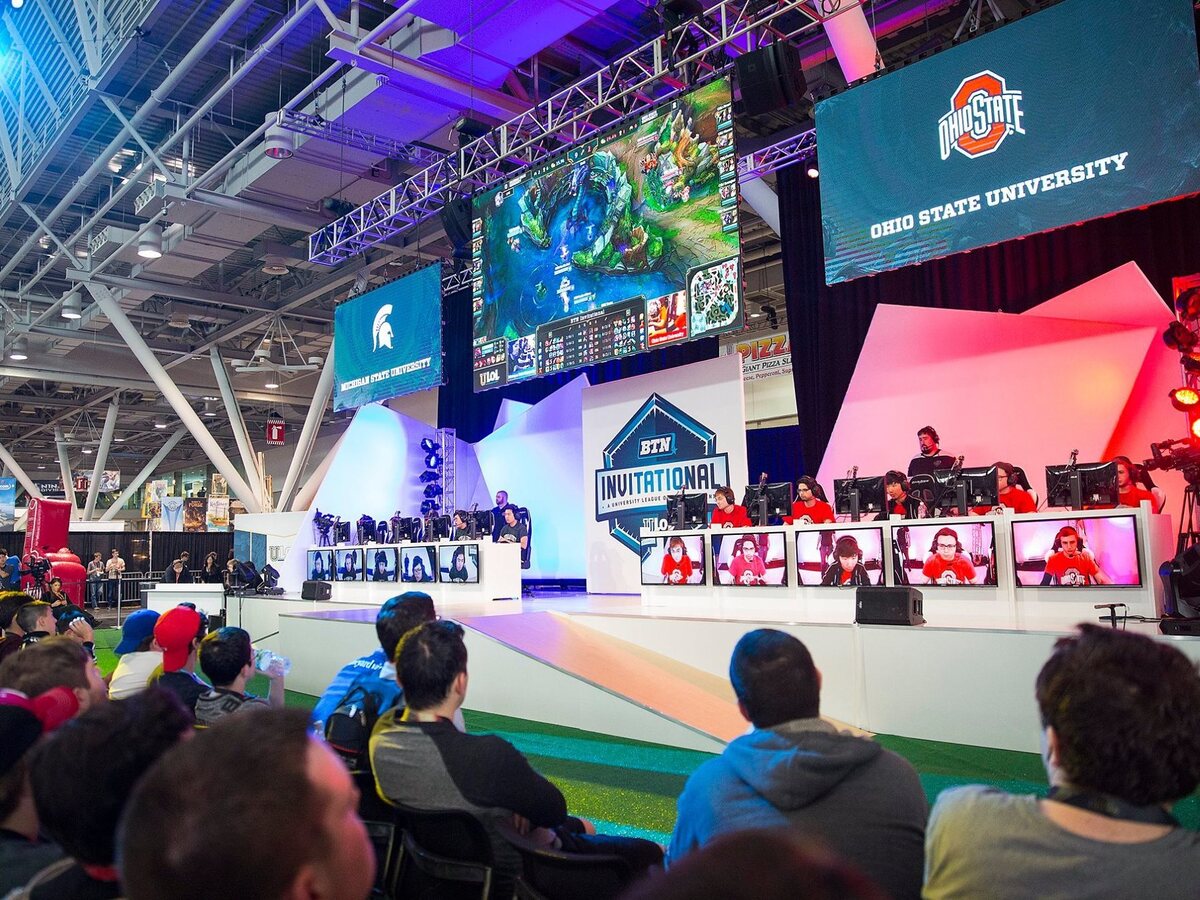 Last year at PAX East, a gaming conference in Boston, Riot and Big Ten organized an exhibition match between Ohio State and Michigan State that drew thousands of people to the room (Ohio State won that time). And over the past few years, League developed a vibrant, competitive college scene in addition to its (often lucrative) professional scene.

"We want to build sustainability, and sustainability means there need to be systems that help grow the space so there's more than just a couple of good players out there," Sherman says.

While no other conference runs its own League season, the uLoL Campus Series — which includes over 200 other North American college teams — will produce its own winner, who will face off against the Big Ten victor.

Though tournament finals or matches at conferences can lead to standing-room-only crowds, as a spectator sport League still has room to grow. An average game draws a few thousand concurrent online views — Michigan State's match against Indiana neared 7,000 — while a championship match nets upwards of 70,000, nowhere near the numbers of, say a Big Ten football matchup.

But it's unfair to compare a fledgling e-sport to an established pastime, says Erin Harvego, Big Ten Network's vice president of marketing. The network doesn't expect this tournament to immediately match up.

"This is a wide open space for us, and I think we're just going to use this year to explore it a little bit more," Harvego says.

Both Riot and Big Ten say their goals are the same: Build an infrastructure, drive awareness among students, and help get the schools invested.

There's no prize money involved, although Riot offers scholarships for the participating Big Ten teams — $5,000 to each of the 72 players involved. McDougall says that's enough to cover one semester's tuition, although some of his team members have a hard time explaining the situation to their parents.

"My family is, I guess, they're just happy for me," McDougall says. "Obviously they were concerned in high school when I was just playing a lot of video games, but it looks like it's paying off now so I guess they're OK with it."

More and more, colleges have stepped up to serve up their own incentives.

Robert Morris University Illinois became among the first to offer gaming scholarships in 2014, and since then has been runner-up twice for national League titles. Lourdes University in northwest Ohio recently announced its own scholarships.

"E-sports players in general tend to skew very high in STEM majors, and they also have higher GPAs," Harvego of the Big Ten Network says.

According to Re, Riot Games does not see the collegiate League scene as a stepping stone to the professional levels, nor will it anytime soon. That's something both McDougall, who majors in computer science, and Re, computer science and engineering, say they appreciate.

"There's just such a large depth of strategy and understanding that goes into it," Re says. "That's kind of what makes it a staple competitive game and what's made it survive throughout the years."

Not everyone views League of Legends that way quite yet. Among Big Ten and other large schools, students still struggle with convincing athletic departments to incorporate and promote e-sports programs.

Though both Ohio State and Michigan State ranked in the top eight of the uLoL season last year, without official university support they not only miss out on money but also lose chances to compete at conferences and meetups around the country.

As Ohio State aims for a national title, Re says, that acknowledgment — in addition to "a lot of bragging rights" — is the main thing on their mind.

"They really want to be recognized as that university team," Re says. "It means a lot to them — more than a lot of people would think."