Accessibility links
Applying For Internships: InternBlitz Speeds Up The Process : All Tech Considered Students create their profile and can apply for several internships with one click. Currently, InternBlitz is available to students at Georgia Tech, but there are plans to add more campuses soon. 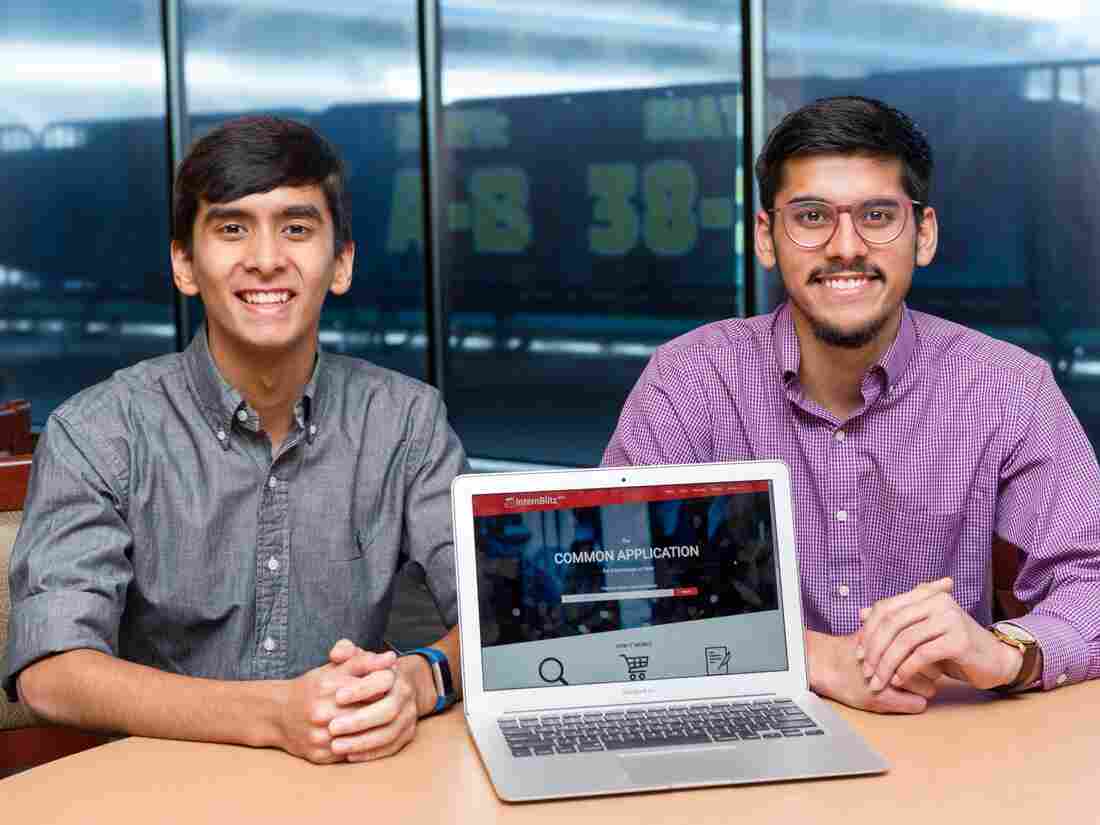 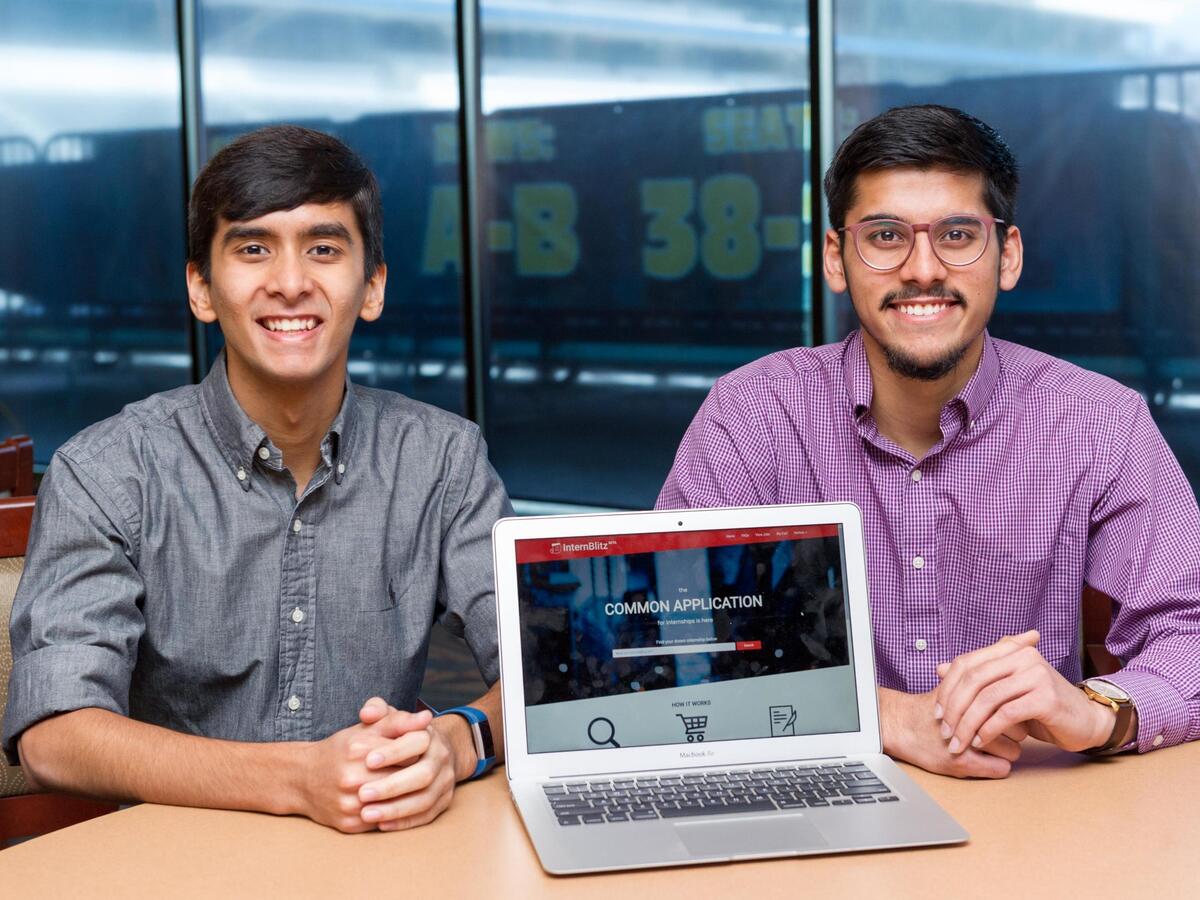 I deeply sympathize with students looking for internships, especially now that I'm an intern at NPR. Gathering all the materials to apply is usually time-consuming and stressful. Indeed, the folder "Internships Summer 2016" on my laptop contains 23 different cover letters and 23 versions of my resume.

My efforts in filling applications out are nothing compared to Murtaza Bambot's. Last spring, the Georgia Tech senior applied for 125 internships — only to get three responses.

"I saw how broken the system was," says Bambot, an industrial engineering major from Duluth, Ga.

The discrepancy between efforts and results made Bambot and Nathan Dass, a fellow student at Georgia Tech, think about how to minimize the time devoted to a single application by maximizing the possibility to get interviews.

The two realized that candidates working on multiple applications devote a significant chunk of time providing their personal information to prospective employers. Think about writing your name, email, phone number, GPA, pasting the link to your LinkedIn profile or portfolio, declaring your veteran status multiple times, as Bambot did. A tedious task, for sure.

Their solution — called InternBlitz — is an online platform that allows Georgia Tech students to type their standard information only once. Recently, InternBlitz was awarded $10,000 at the Georgia Tech InVenture Prize competition.

"It's like shopping for internships, that's the idea," Dass says. 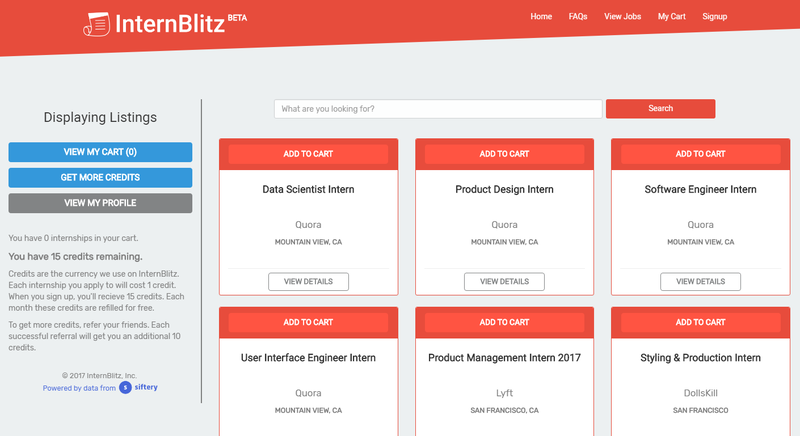 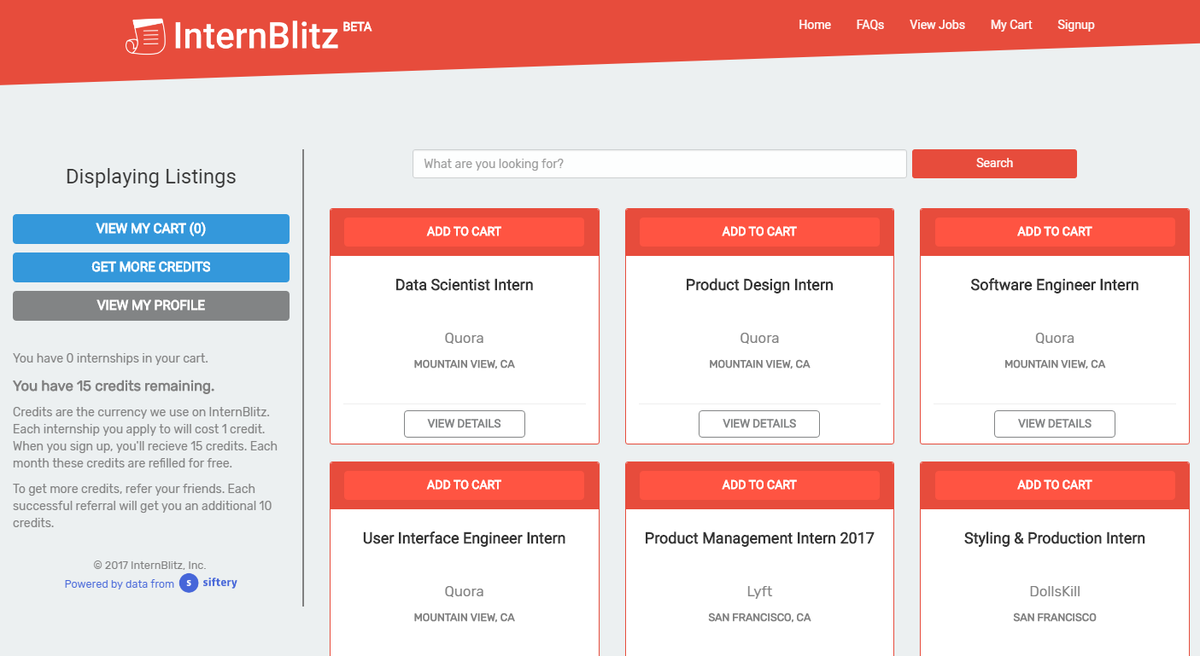 Users can scan InternBlitz's database and add internships to a cart.

Indeed, the logic behind InternBlitz is reminiscent of The Common App, the online tool that high school students use to submit a bunch of undergraduate applications at once. But InternBlitz's interface is similar to Amazon's.

A search bar allows users to scan InternBlitz's database and add internships to a cart. Users can also search internships by location.

The Big New Effort To Revamp College Admissions — Will It Work?

Then, InternBlitz screens the different applications and shows users the unique questions of each application. For example, San Francisco-based company BuildZoom asks wannabe software engineer interns to include a link to "an interesting project that you have created." Quora recruiters want to take a look at your Quora profile, so they ask for your URL. In other cases, online applications end with a captcha — a distorted series of letters and number that applicants need to type to prove they're human.

After completing the specific questions and requirements, users can submit all their applications with a single click. They get confirmation emails as they normally would.

"From a company's perspective, it looks like you applied through the regular online application," Bambot says.

Dass and Bambot didn't contact companies before posting internships on InternBlitz, Bambot explained, because "it would be slower." Dass, a computer science major, explained that InternBlitz pulls out internship postings from the Applicant Tracking Systems, the software applications that handle the recruitment process.

Currently, InternBlitz has a database of about 600 internships and at more than 3,500 companies, with a special focus on the tech industry. The system will always be free to use for students, Dass says. "We don't want to have people buying internships."

So far, InternBlitz is only available at Georgia Tech, but the co-founders are planning to expand to more schools in August. The $10,000 prize Dass and Bambot won will be used to develop and run a marketing campaign.

Also, they're looking at "a couple of ways to generate revenue," Bambot says, which they don't want to disclose at the moment. In the meantime, they're building a functionality that searches LinkedIn to connect applicants with recruiters.

"We want to give companies the flexibility to ask whatever questions they want," Dass says.

For the specific questions — as well for any substantial part of any application — there's still no magic wand to save time.

Hey, Students: 5 Things That Are Wrong With Your Cover Letter