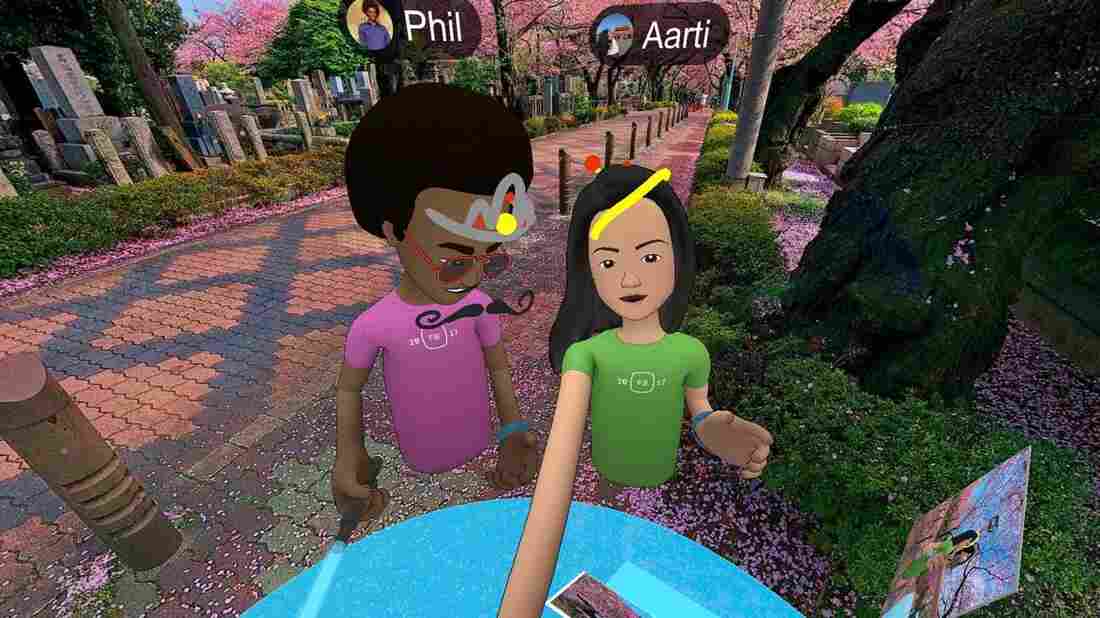 NPR reporter Aarti Shahani tested Facebook's new social VR platform. She requested an older avatar to represent her, but that was not available. Her guide "Phil" had her tour virtual cherry blossoms. NPR hide caption 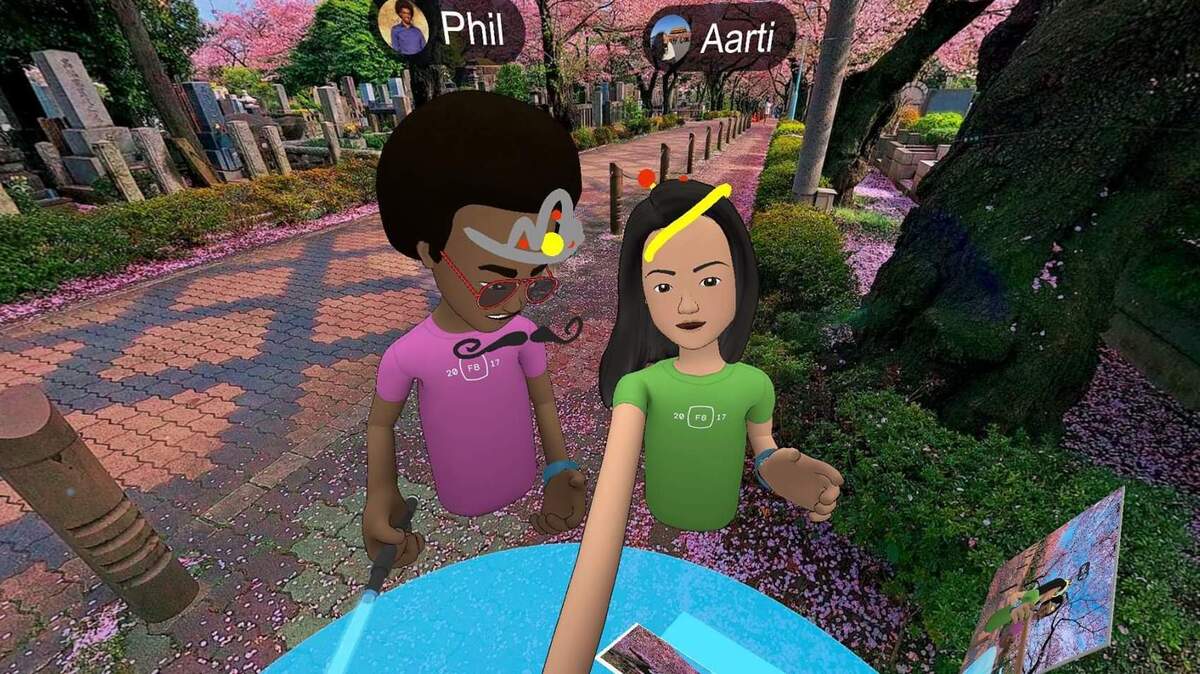 NPR reporter Aarti Shahani tested Facebook's new social VR platform. She requested an older avatar to represent her, but that was not available. Her guide "Phil" had her tour virtual cherry blossoms.

He was speaking at F8. In tech land, that stands for the Facebook Developer Conference, which brings together thousands of people who make apps for Facebook and build other tools for the platform.

Though, for the rest of the world, F8 might be a reference to The Fast and The Furious. Zuckerberg spent the first few minutes of his address making geeky jokes about it and laughing at his own jokes.

And then, once that was out of his system, the 32-year-old CEO pivoted to what seemed like a more serious, timely place. "Last month I wrote a letter on building community. I have it here."

The large screen projected his manifesto, which he published in February, about how broken the human social fabric is and how Facebook could solve that by connecting us. But Zuckerberg acknowledged that human beings are complicated, and being connected is not an unconditional good.

Facebook Murder Suspect Has 'Shot And Killed Himself,' Police Say

"We have a lot more to do here. And we're reminded of this, this week, by the tragedy in Cleveland," Zuckerberg said. He expressed condolences to the loved ones of Robert Godwin Sr., whose murder was broadcast on Facebook. "And we have a lot of work. And we will keep doing all we can to prevent tragedies like this from happening," Zuckerberg said.

It sounded as if Zuckerberg were about to lay out for his audience — the people helping to build his platform — what they all need to take seriously: That people sometimes hijack the app to broadcast gratuitous violence, to wage propaganda wars with "fake news," to bully and to hate.

But that's not what he did. Instead he pivoted again, abruptly, to a radical vision for how Facebook will move us from the two-dimensional news feed to vibrant 3-D imaginary worlds. "Think about, if your daughter is a big Harry Potter fan, for her birthday you can change your home into Hogwarts."

The world learned about "augmented reality" through the Pokémon Go craze. Now Facebook wants to take that craze and turn it into a sustained global movement.

The company plans to use smartphone cameras and virtual reality headsets to create 3-D digital spaces all around us. Instead of seeing a real painting, for example, you could don a headset and stare at a blank wall to gaze upon imaginary art. Your kids could wear goggles at breakfast, and see fun little sharks swimming around the bowl of Cheerios. Or say you wake up for your morning coffee. "You can add a second coffee mug so it looks like you're not having breakfast alone," Zuckerberg said.

He told the audience to imagine tapping on a virtual wine bottle, "and you can add an information card that shows what the vintage of the wine is and what the rating is and maybe where to get it and maybe in the future even a link to buy it."

In the imaginary world, the possibilities — creative and commercial — are endless.

The company is releasing an initial version of "Facebook Spaces," a new virtual reality app that lets you hang out with your Facebook friends in VR as 3-D cartoon characters, or avatars. Facebook VR guru Rachel Rubin Franklin explained onstage: The company is using artificial intelligence to suggest how you should look. Though you have the final word, of course. "You can add glasses or facial hair. You can change your eye and hair color," she explained.

When you step back and take in this Facebook keynote, it appears Zuckerberg (and his leadership) are, like the best engineers, deeply excited about the new worlds they can build, but also deeply unsure about how to govern these worlds.

Virtual and augmented reality apps are not new. But Ryan Pamplin, vice president of sales at augmented reality company Meta, says in an email that Facebook is "uniquely positioned" to take them from the gamer community to the mainstream.

He writes: "If you believe Facebook has good intentions and will properly protect user privacy, it's exciting. If you don't, then it's a scary step towards a dystopian future."