Accessibility links
Dogs Are Doggos: An Internet Language Built Around Love For The Puppers : All Tech Considered DoggoLingo is a rising language on the Internet that's full of cutesy suffixes and onomatopoeias. It might even change the way you talk to your pet. 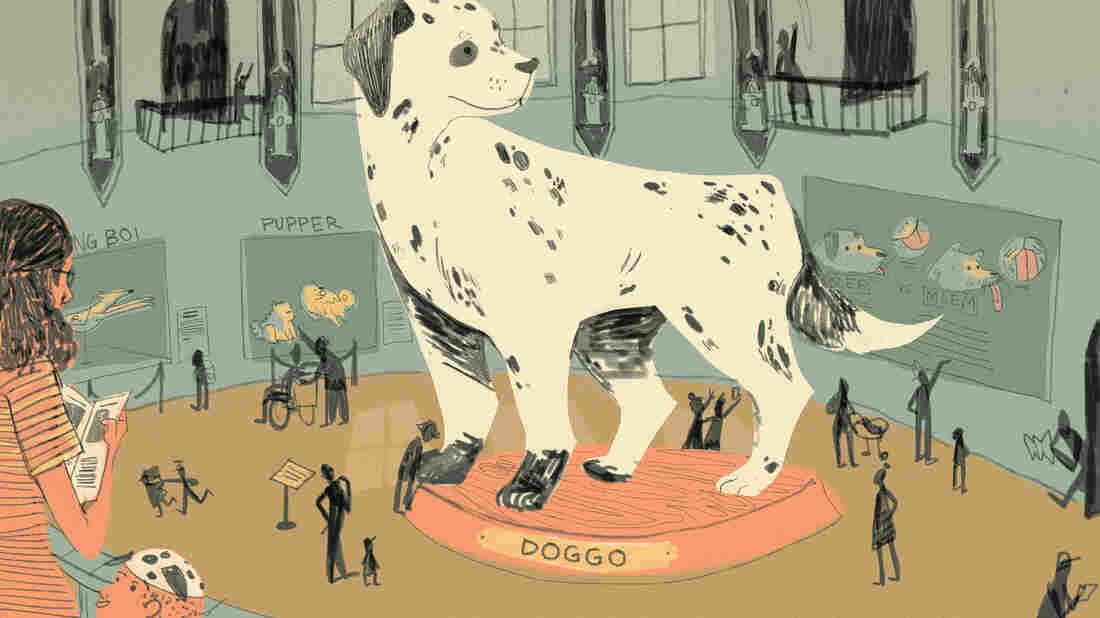 "DoggoLingo" is a language trend that's been gaining steam on the Internet in the past few years. Words like doggo, pupper and blep most often accompany a picture or video of a dog and have spread on social media. Chelsea Beck/NPR hide caption 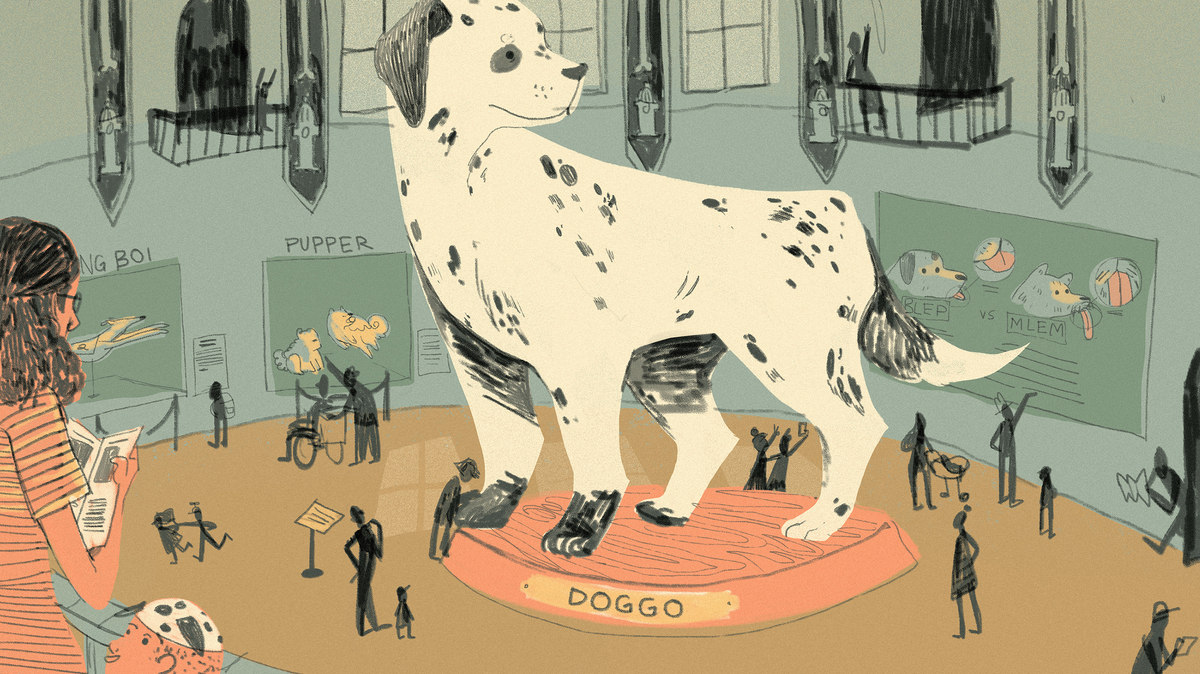 "DoggoLingo" is a language trend that's been gaining steam on the Internet in the past few years. Words like doggo, pupper and blep most often accompany a picture or video of a dog and have spread on social media.

Some dogs are doggos, some are puppers, and others may even be pupperinos. There are corgos and clouds, fluffers and floofs, woofers and boofers. The chunky ones are thicc, and the thin ones are long bois. When they stick out their tongues, they're doing a mlem, a blep, a blop. They bork. They boof. Once in a while they do each other a frighten. And whether they're 10/10 or 12/10, they're all h*ckin' good boys and girls.

Are you picking up what I'm putting down? If not, you're probably not fluent in DoggoLingo, a language trend that's been gaining steam on the Internet in the past few years. The language most often accompanies a picture or a video of a dog and has spread to all major forms of social media. It might even change the way we talk out loud to our beloved canines.

DoggoLingo, sometimes referred to as doggo-speak, "seems to be quite lexical, there are a lot of distinctive words that are used," says Internet linguist Gretchen McCulloch. "It's cutesier than others, too. Doggo, woofer, pupper, pupperino, fluffer — those have all got an extra suffix on the end to make them cuter." 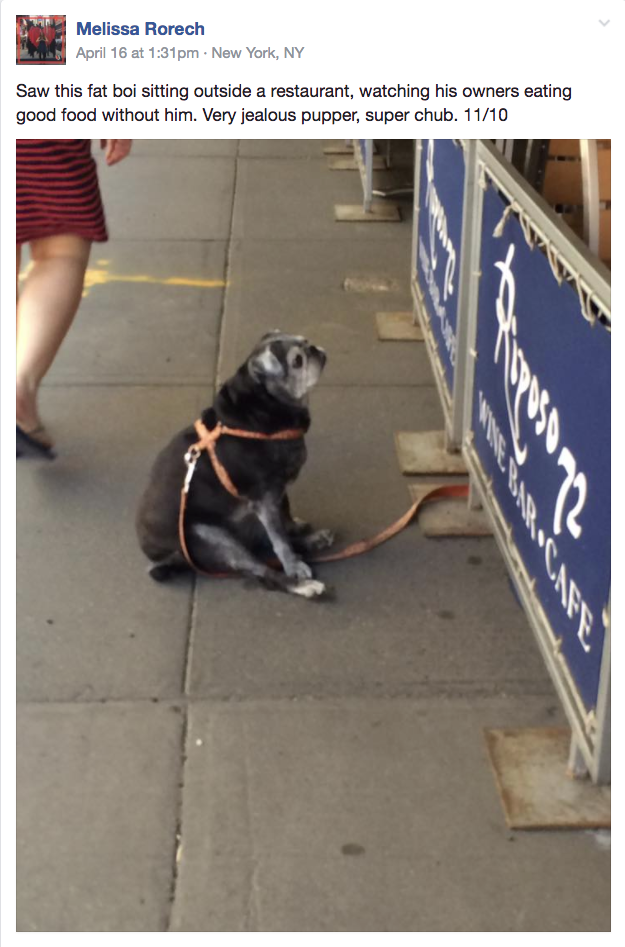 This post uses the term "fat boi" to describe the small doggo in the picture. Dogspotting/Screenshot by NPR hide caption

It's no surprise DoggoLingo is made up of cutesy suffixes and onomatopoeias. "You're taking on characteristics of how people would address their animals in the first place," McCulloch says.

What's more, DoggoLingo is spoken by humans online, as opposed to in memes like LOLcats, doge and snek where the animals themselves do the talking. This makes DoggoLingo much more accessible, McCulloch notes, and perhaps more likely to find its way into spoken human speech.

It wouldn't be surprising if people started to call their Samoyeds fluffers, point out a Labrador's mlem or call an overweight pug a fat boi, as in this Facebook post. In fact, they're probably saying these out loud already.

"A new cutesy word for a thing you're already used to using cutesy words for? That's such an easy entry to vocabulary," McCulloch says.

DoggoLingo's array of words is a hodgepodge of existing Internet language.

For example, the phrase "doing me a frighten," used to describe startled dogs, comes from an image posted in late 2015 according to KnowYourMeme.com. In it, a tiny Rottweiler puppy shocks its parent with a flurry of borks. The parent replies, "stop it son, you are doing me a frighten."

The origin of "bork" itself is less clear, but it's clearly onomatopoeic. It's perhaps most well-known thanks to Gabe the Dog, a tiny floof of a Miniature American Eskimo/Pomeranian whose borks have been remixed into countless classic tunes. Jurassic Bork, The Bork Files, Doggos of the Borkribbean, Imperial Borks — the list goes on and on.

Gabe the Dog popularized the term "bork," which is synonymous with bark.

Tongue sounds have been floating around the Internet for a few years now, but seem to have finally found a home in DoggoLingo. They even have precise meanings. As Redditor blop_cop points out in a comment, "A blop is when a dog pokes his tongue out due to tiredness/forgetfulness and it often is only a small portion of the tongue. A mlem is basically any time a dog is licking their chops, or sticking their tongue out!" 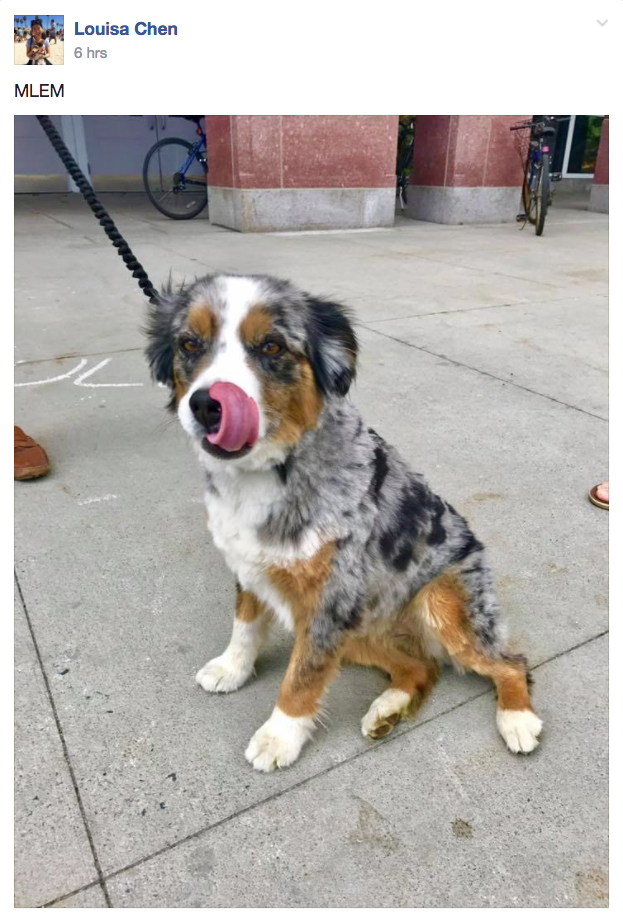 The word "mlem" is the entirety of the caption in this post from a user to the Dogspotting Facebook group. Dogspotting/Screenshot by NPR hide caption

A perfect example of a miniature Australian shepherd doing a "mlem" was captured on Facebook, as shown here.

Not all of DoggoLingo is canine-bound. "Blep" is commonly used for cats sticking out their tongues, too, as demonstrated on the feline-focused subreddit /r/blep.

The constant use of "heck" in DoggoLingo might come from the snek meme, McCulloch says, where snakes try to act tough but are really just loveable losers.

Sometimes heck is censored as h*ck. Matt Nelson, who runs the WeRateDogs Twitter account (@dog_rates), says tweets from WeRate popularized h*ck and its derivatives. "I'm sure someone else did that before," he says, "but it was something original to me and I used it to such an extent that people associate it with [@dog_rates] now."

@dog_rates currently has 1.77 million followers. Nelson rates submissions to the account with such lighthearted humor that, when combined with the power of a bombastically cute pup, often go viral.

McCulloch thinks DoggoLingo may have become popularized and perhaps even solidified in this way thanks to accounts like WeRateDogs on Twitter, and also to dog-devoted groups on Facebook with thousands of members.

One such group is called Dogspotting. At more than 500,000 members — and gaining around 10,000 a week — it's one of the larger dog-devoted groups on Facebook. The rules are simple. ...Well, OK, they're not that simple.

Here's a pupper before and after being asked "who's a good girl?" Unsure as h*ck. 12/10 hint hint it's you pic.twitter.com/ORiK6jlgdH

Essentially, members around the world post photos and videos of dogs they happen across in their daily lives. The No Known Dogs rule makes sure people don't spam posts of their own pets, the No Selfies rule keeps the posts dogs-only (no humans!), and the Don't Drive and Spot rule keeps spotters safe.

The result: thousands of doggos and puppers flood the Dogspotting group — and members' newsfeeds — every single day.

Of course, with members constantly posting and writing captions, the group is a breeding ground for DoggoLingo.

"We can't help but be socially influenced by each other," McCulloch says. "The fun part of a meme is participating in something that other people recognize." 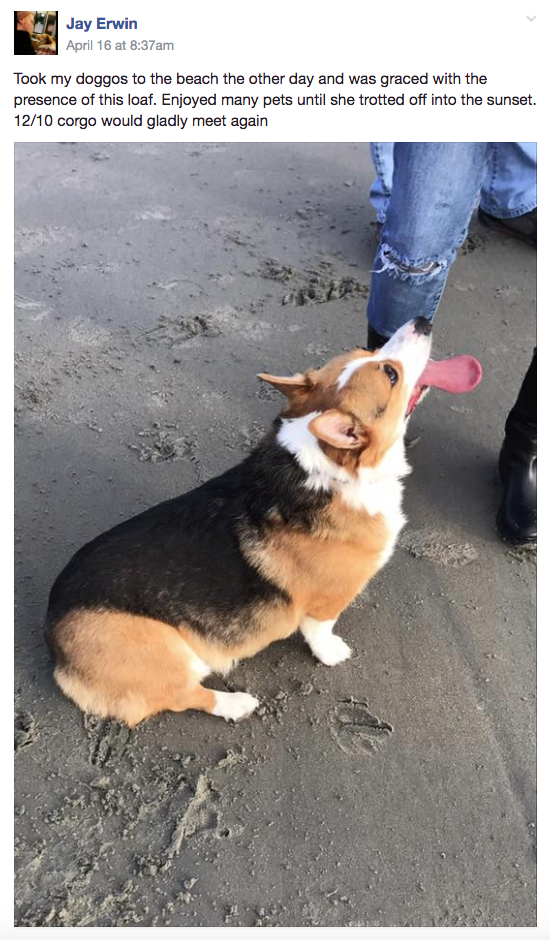 "Loaf" is used to describe the Corgi in this post. Dogspotting/Screenshot by NPR hide caption

Dogspotting may even be the birthplace of DoggoLingo's titular term "doggo."

Though created in 2008, Dogspotting really took off in the summer of 2014, particularly in Australia.

This is significant because, as McCulloch points out, adding "-o" to words is very Australian. For example, where we'd say def to abbreviate the word definitely, Australians would say defo.

So were Australians posting in Dogspotting saying "doggo," which English-speakers around the world picked up on and turned into a viral Internet word?

"That makes a shocking amount of sense," says John Savoia, who founded Dogspotting and runs the page with Reid Paskiewicz and Jeff Wallen.

"I bet you anything [doggo] was used before Dogspotting and we just made it part of the lexicon," Paskiewicz says.

James Moffatt, a performance artist who grew up in Adelaide and is not a member of Dogspotting, says he remembers doggo being used "as an affectionate diminutive to refer to dogs throughout my childhood."

All in all, it's possible that doggo got a boost shortly after more Australians joined Dogspotting. Pages like Ding de la Doggo may have also assisted its slingshot into meme stardom.

Dogs' wholesomeness could be why groups like Dogspotting and accounts like WeRateDogs have become so popular. They're an escape from a news cycle that's become terrifying and depressing for so many.

Nelson isn't sure why exactly dogs are so genuinely heartwarming. "Maybe they represent this sort of unconditional love that we strive for," he says, "or they just embody this innocent perfection that we can't really find in ourselves or immediately in other animals."

"Dogs in general are wholesome and uplifting," says Dogspotting moderator Molly Bloomfield. "Irrelevant of your political views, your gender, your socioeconomic status; everyone loves dogs and dogs love everyone."

To preserve this oasis and prevent conflict among members, Dogspotting doesn't allow its members to take political stands in their posts.

"We try our hardest to be fair to everyone," Wallen says. "We allow spots from rallies, protests and such, but we don't allow people to project their agendas onto the spotted dogs." For example, a Dogspotter could say, "I spotted this pup at the anti-Trump rally," but not, "This dog hates Trump."

This Dogspotter followed the rules perfectly, spotting a "beautiful doggo" named Oreo at a Planned Parenthood rally in Illinois. 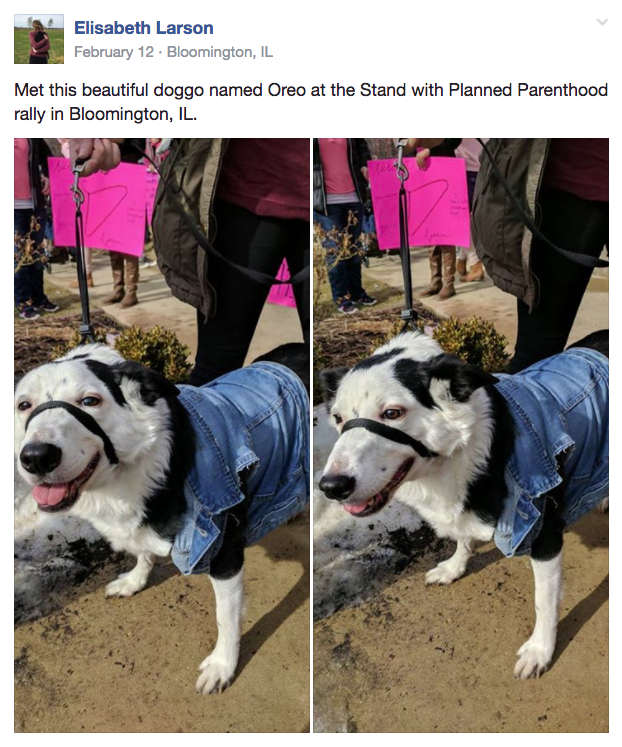 Dogspotting keeps its users from getting political. In this post, the black and white dog shown is said to be at a Planned Parenthood rally, but not stating any political allegiance. Dogspotting/Screenshot by NPR hide caption

Rule breakers are banned, but can appeal to the Dogspotting People's Court for re-entry. "We want everybody to get back in," Paskiewicz says, "as long as they don't do it again."

As WeRateDogs followers are constantly reminded, all dogs are good dogs. And just about every dog posted on Dogspotting is accompanied by a tone of wonder, gushiness, or pure elation.

"In this time of politics hijacking our social media, people need dogs to smile and enjoy the good things in life," Paskiewicz says. "I feel honored to be a part of this social happening."

"Dogspotting is relentlessly positive," says Joey Faulkner, a Dogspotter and Ph.D. student at the University of Edinburgh who's blogged about the group in the past.

As Bloomfield puts it, "Dogs are here! How can the world be evil when dogs exist?"

Even the way Dogspotting is run is wholesome. Other dog-devoted Facebook groups like Cool Dog Group and Big Hecking Group of Dang Doggos aren't seen as competition to Dogspotting, Paskiewicz says. "The more dogs, the better."

This spot, known as Existentialist Paradox Pupcake, is a favorite of Dogspotting admin Reid Paskiewicz and moderator Molly Bloomfield. It features a pupper on the streets of Venice.

And if Dogspotting ever becomes profitable, Paskiewicz says a fixed percentage of profits will go to a respected dog charity.

Dogspotting is so positive and complex that Paskiewicz has felt the need to specify during interviews that the group is not a cult. The phrase "we are not a cult" has even spread to posts and T-shirts. It's one of many Dogspotting mottos, along with "the dogs must flow," a reference from the novel Dune, and "be excellent to each other," from Bill and Ted's Excellent Adventure.

The newest slogan? "Come on in, the dogs are fine," Paskiewicz says.

This dog-centric positivity has driven the popularity of DoggoLingo to new heights. Even Merriam-Webster is aware of terms like doggo and pupper. Though they have a long way to go before they're eligible for dictionary-entry — they need to be used in published, edited work over an extended period of time — they're definitely candidates.

"I personally like both," says Emily Brewster, an associate editor at Merriam-Webster, Inc. "I think it's great when people play with their language, and the new 'doggo' is way more fun than the unrelated adverb meaning 'in hiding.' "

McCulloch thinks some DoggoLingo terms have staying power, too: "I wouldn't be surprised if we see 'doggo' around in 50 years and people never realize it came from a meme."

Jessica Boddy is a former NPR science desk intern. You can follow her @JessicaBoddy.

Canine Or Cuisine? This Photo Meme Is Fetching