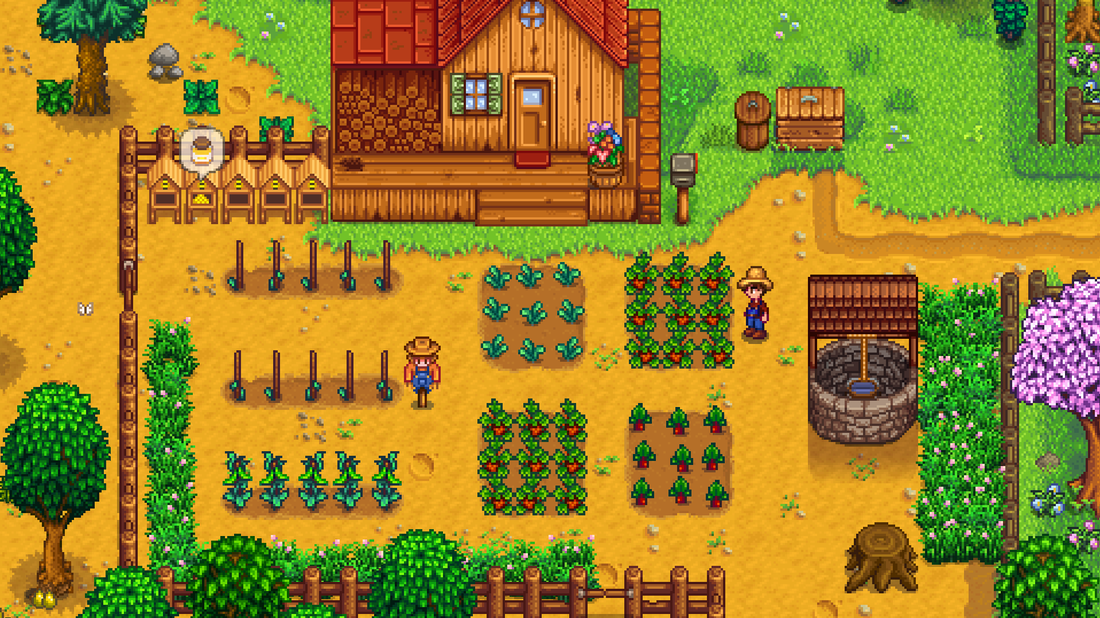 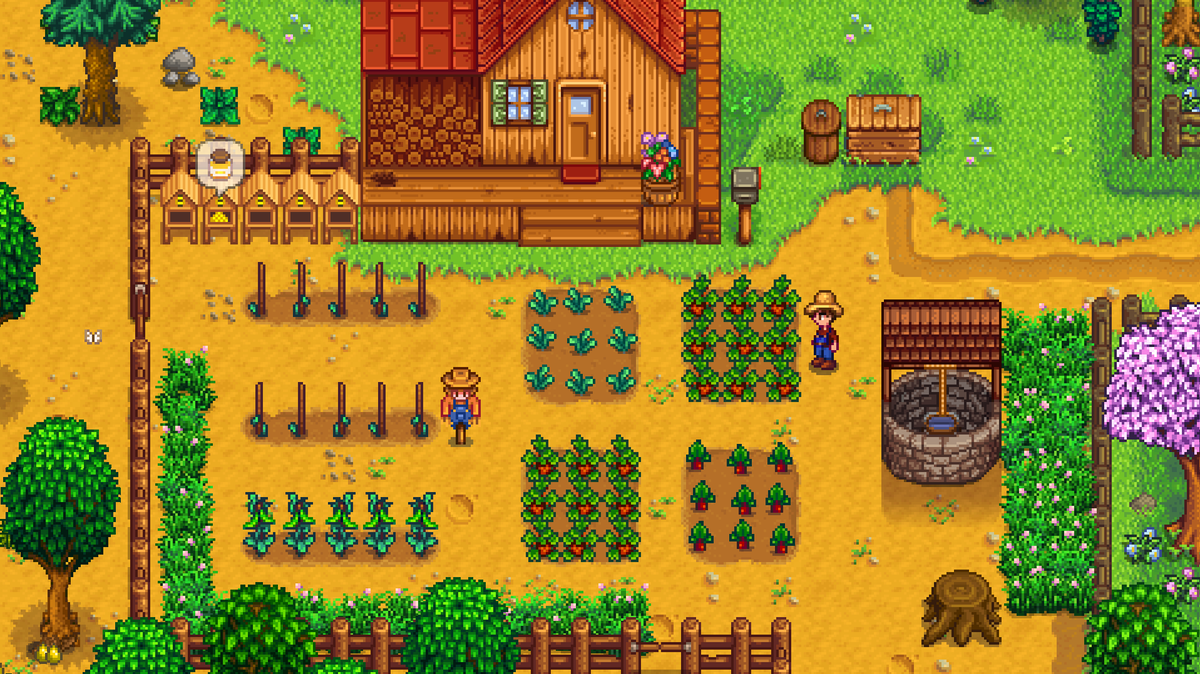 Life in 16 bits — complete with chickens and monsters — in Stardew Valley.

It was my daughter Parker who picked up Stardew Valley first. She's 13, smart, beautiful, furious, funny, clumsy as a newborn giraffe. She loves videogames the way I love videogames, but loves none of the videogames I love — not the shooty ones or the dark ones or the violent ones.

Stardew Valley is something different. The game is essentially a farming simulator — you grow crops and sell them, tend animals and make cheese from their milk or mayonnaise from their eggs. You fish sometimes, talk to the people who live in town, deal with the magical apple monsters who have taken over the town's community center and demand tribute in the form of a hundred small quests. It exists like an indie re-incarnation of Harvest Moon, the game which introduced the world to farming sims in the 1990's, and there's an entire generation of gamers who love it unreservedly just for that — for being a polished new version of something they loved like crazy-go-nuts back in the day — but on the surface, it's a game that doesn't seem to have a lot going on.

Reading The Game: Shadow Of Mordor

It drove me crazy the way Parker played. I would watch from the couch as she wandered aimlessly around her small, cluttered house or doodled around her asymmetrical mess of a farm — her movements a kind of digital Brownian motion born of a hundred distractions. She would water two or three plants, then run off to chase her dog, come back, water a little more, go look at butterflies or just leave. Go off onto the paths that run between her Kawaii Farm and Pelican Town a couple screens away to pick flowers, talk to people or poke through their trash cans.

"Parker," I said to her, frustration putting an edge on my words. "What are you doing?"

And she looked up at me and said, "Just playing. You want to try?"

So I did. I made a farm of my own — Butcher Holler — and the two of us played side-by-side for two in-game years. The core of Stardew Valley's story is simple: You are an office drone, just tappy-tapping away at your computer day after day, year after year until, finally, it all becomes too much. You walk away, get on a bus and travel to the farm that your grandpa left to you years ago in Stardew Valley.

And look, I've had my fair share of cubicles. I know that urge to pack it all up and move on. I took Grandpa's offer seriously. He'd left me a farm, but it was a disaster. And it was up to me to whip it into shape.

So I cleared the land. I tilled the soil. I figured out which seeds had the highest return on investment and planted them in neat rows for easy watering. Parker, meanwhile, tended a tiny patch of strawberries and collected flowers. She went down to the beach and picked up shells, but refused to fish even though it was the most effective method for earning money in the early weeks of the game. She showed me the sewer where the monster lives, and the mines which were full of treasure. She didn't like going down into the mines because she'd freak out whenever something attacked her and, also, she'd lost her sword somewhere, or sold it, or given it away.

So instead, she followed behind the children, Jas and Vincent, and told me how Jas's parents were both dead. How Penny teaches them at the museum because there's no school in Pelican Town and how Alex, the jock, is a lot sadder than he seems because his father was an abusive drunk and his mom died, and now he lives with his grandparents but doesn't like to talk about it. I asked her how she knew all this and she told me, "I talk to them."

In winter nothing grows, so I ground my way through the mines, clearing them level by level, while Parker redecorated her house and made friends with mopey Abigail with the purple hair and a wizard who lived in the forest. Spring came again. My farm was large. The chests in my house were overflowing with gold ore and rubies from the mine. One afternoon I called Parker over to show her how much you can make on a good haul of melons and corn. "See?" I said. "Look at that. That's one day's work."

Relationships in Stardew Valley are expressed in bars full of hearts. I had two with Linus, the homeless guy who lived in a tent on the way to the mines and who I would occasionally give food to. Most of the other people in Pelican Town probably didn't even know my name.

Then Parker loaded up her game. Pulled up her social screen. It was overflowing with hearts. Everyone loved her.

Stardew Valley's story gives you only what you want from it. What you get out of the experience depends heavily on what baggage you're carrying when you first climb on that bus and take the long ride to the coast.

Neither way of playing is right. Neither one is wrong. It's just life, rendered in 16 bits and full of chickens and monsters.

Our games tell two very different stories: Hers is a tiny soap opera full of love, tragedy and sewer monsters; mine a how-to manual on maximizing profit in a small farming community. For me Stardew Valley is a game of control — of small goals and constantly accruing rewards. It is about the comfort of simplicity and repetition, season following season and harvest following harvest. It is not without story the way I play it, but my version of it is a singular story, about a man who walked away from the modern world and came to his grandpa's farm in a town with only four TV channels.

Parker comes to it differently. She is a 13-year-old girl, the between-iest thing in the world. And for her, Stardew Valley is a life simulator — a pixelated, primary-colored safe space where she gets to practice being a grown up. Here, she can turn her coddled pet chickens off for the night when tending to them becomes a drag, and make connections with people who are bound and bordered by the parameters of a game that is so much easier to understand than the lawless chaos of the real teenage world. She knows secrets about Stardew Valley that I never will, because to her, it's a map to a world she is just beginning to understand, while for me, it's a spreadsheet of a system I understood all too well.

Neither way of playing is right. Neither one is wrong. It's just life, rendered in 16 bits and full of chickens and monsters. And it never ends. Every season gives you a new chance to start over. To do things differently.

Which, wizards and sewer monsters aside, is maybe the most magical thing about it.