Accessibility links
Startup Visa Alternative Gives Foreign Entrepreneurs A Workaround : All Tech Considered Immigration advocates often tout how many startups are founded by foreigners. Yet the U.S. does not offer startup visas. Some entrepreneurs turn to a program started as an experiment in Massachusetts. 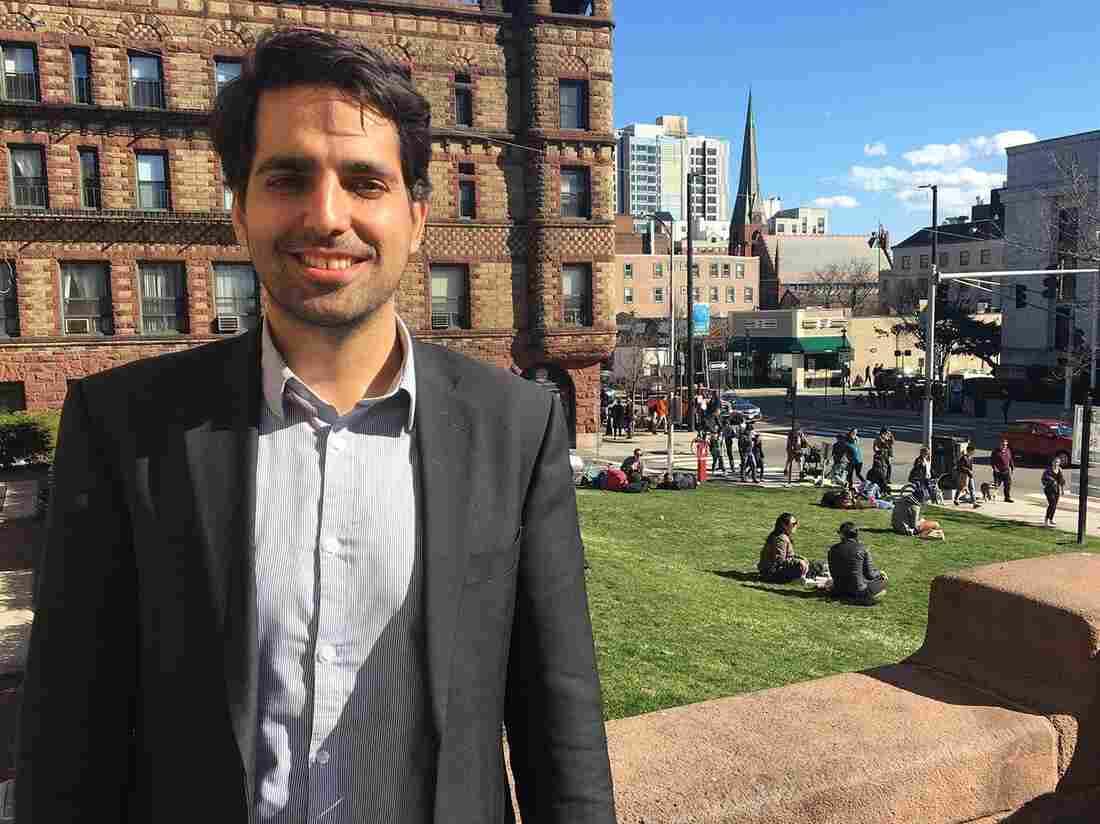 Paulo Melo is a global entrepreneur-in-residence at the University of Massachusetts-Boston. This visa workaround allowed Melo, originally from Portugal, to legally stay in the United States and build his business in Massachusetts. Asma Khalid/Asma Khalid/WBUR hide caption 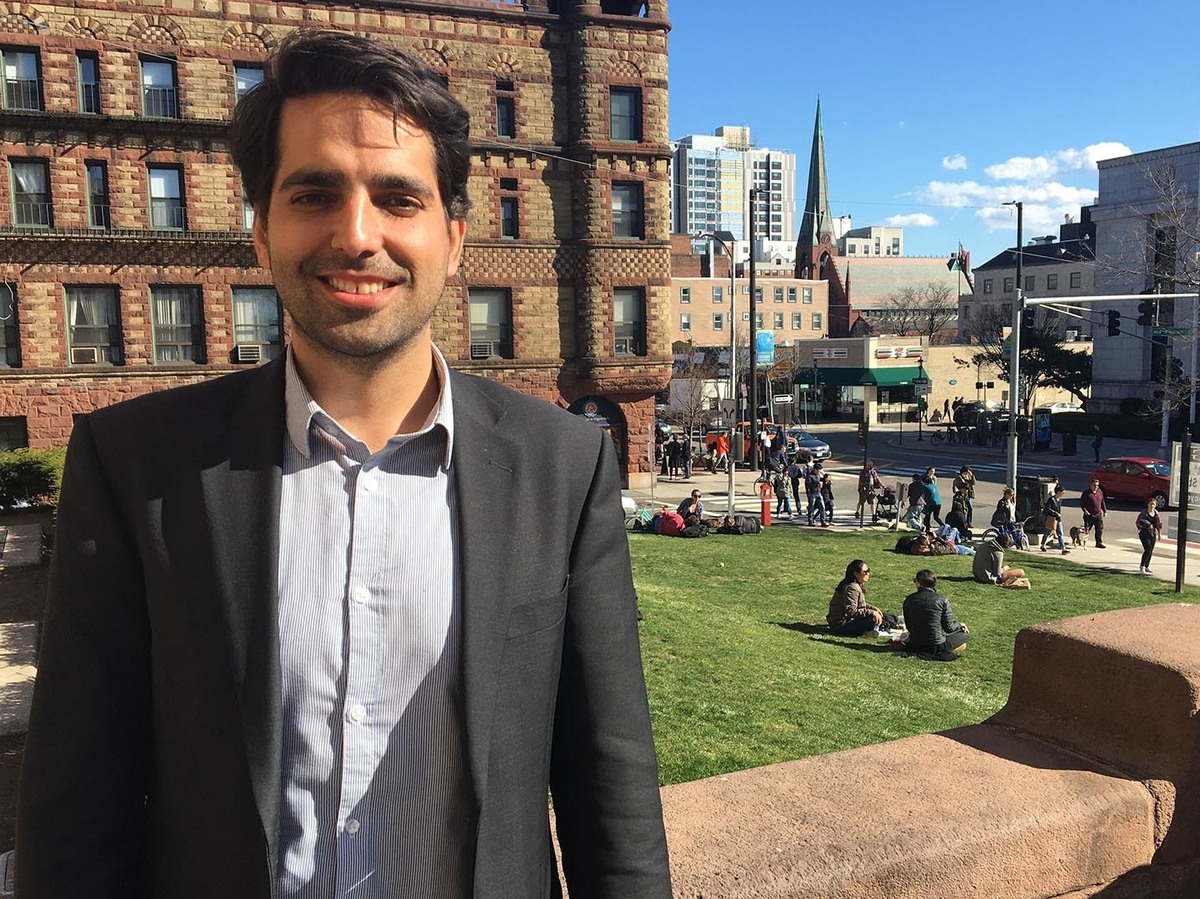 Paulo Melo is a global entrepreneur-in-residence at the University of Massachusetts-Boston. This visa workaround allowed Melo, originally from Portugal, to legally stay in the United States and build his business in Massachusetts.

Immigration advocates claim that about half of the most lucrative startups in America were founded by immigrants. But it's complicated for a foreigner to start a company in America — there's no such thing as a startup visa.

That's why some entrepreneurs are "hacking the system" through a workaround that started as an experiment in Massachusetts and has expanded to five other states.

'Otherwise I wouldn't have been here'

Shortly after Paulo Melo graduated with his doctorate from the Massachusetts Institute of Technology in 2014, he co-founded doDOC, a startup that helps life science and pharmaceutical companies streamline communication.

Melo grew up in Portugal. He's not an American citizen — he only came to the United States for grad school — but he wanted to stay in Boston because he thought it was the ideal place to grow his infant business. But he faced a major problem: getting a visa.

"There's a lot of things in motion when you're building a company," Melo says. "At the same time, you have to deal with your visa. And a lot of times it takes a lot of your time and energy. ... There are some days where you feel like it's too much. You don't sleep. But you kind of chose it that way — you know the rules."

The rules he's talking about are immigration laws. Typically an employer can sponsor a work visa, but Melo was his own employer — he didn't have anyone to sponsor him. So when he heard about wonky workaround at the University of Massachusetts-Boston, called the Global Entrepreneur-in-Residence program, Melo jumped at it.

It gave him the ability to legally stay in the country longer — and, he says, changed his life.

"Otherwise I wouldn't have been here," he says. "I couldn't have done what I've done at a personal level, at a professional level."

Melo's startup now has deals with a few major pharma companies and has hired employees in Massachusetts and Texas.

The visa program that helped Melo began as an experiment with the state of Massachusetts in 2014. That first year, just two people were enrolled. Since then, there have been more than three dozen participants.

Here's how it works: A university sponsors an entrepreneur like Melo for an H-1B visa, a common work visa for high-skilled labor. The number of these visas is capped for companies, but not for colleges.

The sponsoring university technically employs the foreign-born entrepreneur, who is typically tapped to participate on campus by mentoring students, reviewing their business proposals or teaching classes. In exchange, this allows foreign startup founders to informally keep building their businesses in the U.S.

Mexicans No Longer Make Up Majority Of Immigrants In U.S. Illegally

This Global Entrepreneur-in-Residence program isn't the only hack: Through the years, various people in the tech community have tried different tactics to work around the limitations of the existing visa system.

A few years ago a Silicon Valley-based startup, Blueseed, came up with the idea of hosting entrepreneurs on a ship stationed in international waters near the Bay Area, though the idea is apparently on hold because of funding.

Another company, Unshackled Ventures — an early-stage venture capital firm in Silicon Valley — specifically invests in immigrant-founded startups in the U.S. The firm has helped sponsor founders for eight different visa types. And Unshackled Ventures Founding Partner Manan Mehta says his firm has been working with the Global Entrepreneur program.

In fact, in the absence of a formal federal "startup visa," the Global Entrepreneur-in-Residence idea from Massachusetts has become the de facto replacement. In the past couple of years, it has spread to five other states and essentially become a model for the tech community nationwide.

This entire workaround is the brainchild of Jeff Bussgang, a venture capitalist in Boston.

"I was seeing all of these terrific entrepreneurs from overseas be inspired by our innovation ecosystem," Bussgang says, "and yet when they wanted to start a company, we were telling them they were not allowed to stay."

Bussgang initially focused on Massachusetts, but quickly noticed an appetite for his visa model in other states. The program now has 14 university partners in six states: Massachusetts, Colorado, Missouri, Alaska, Illinois and California.

"You see a lot of people who could be entrepreneurs choosing not to because they see the visa system as being unfriendly," says Craig Montuori, the man responsible for taking the Massachusetts model across the country. He's in talks with additional colleges and universities in Minnesota, Wisconsin, Indiana and Ohio.

Montuori is a political junkie and former software engineer who is the executive director of the Global Entrepreneur-in-Residence Coalition. He says it's nearly impossible for a company to be adequately funded without a visa for a foreign-born founder — and without funding, a company can't survive.

Montuori sees the Global Entrepreneur program as the best legal visa path for an early-stage company founded by a foreigner — and an effective way for colleges and universities to attract global talent and teach entrepreneurship. And that, Montuori argues, this way, ultimately helps the American economy.

Not everyone sees it that way. The idea of "hacking" the immigration system rubs some people, including Sen. Chuck Grassley, R-Iowa, the wrong way.

The Senate Judiciary Committee chairman has suggested that foreigners are colluding with U.S. universities to take advantage of immigration rules. In a 2016 letter to the director of U.S. Citizenship and Immigration Services, he referred to the Global Entrepreneur-in-Residence program as a "cynical exploitation of loopholes in the law."

Paolo Melo — the MIT grad from Portugal — is hesitant to talk politics, but he is eager to share an update: "I applied to the EB-1 visa — the extraordinary ability visa, and I just got a confirmation that I got approved."

So in lieu of any clear-cut visa path for entrepreneurs, Melo's experience, forged through the Massachusetts workaround, might be the most realistic model: Work with a university and then eventually try to snag a so-called "rock-star" visa.