Accessibility links
In Google's Vision Of The Future, Computing Is Immersive : All Tech Considered Point your camera at a flower and your phone identifies it. Walk into a store and your phone leads you to the item you're looking for. It's part of a future world blurring the virtual and the real.

In Google's Vision Of The Future, Computing Is Immersive

In Google's Vision Of The Future, Computing Is Immersive

Google Is Investing In 'Immersive Technology'

Google Is Investing In 'Immersive Technology' 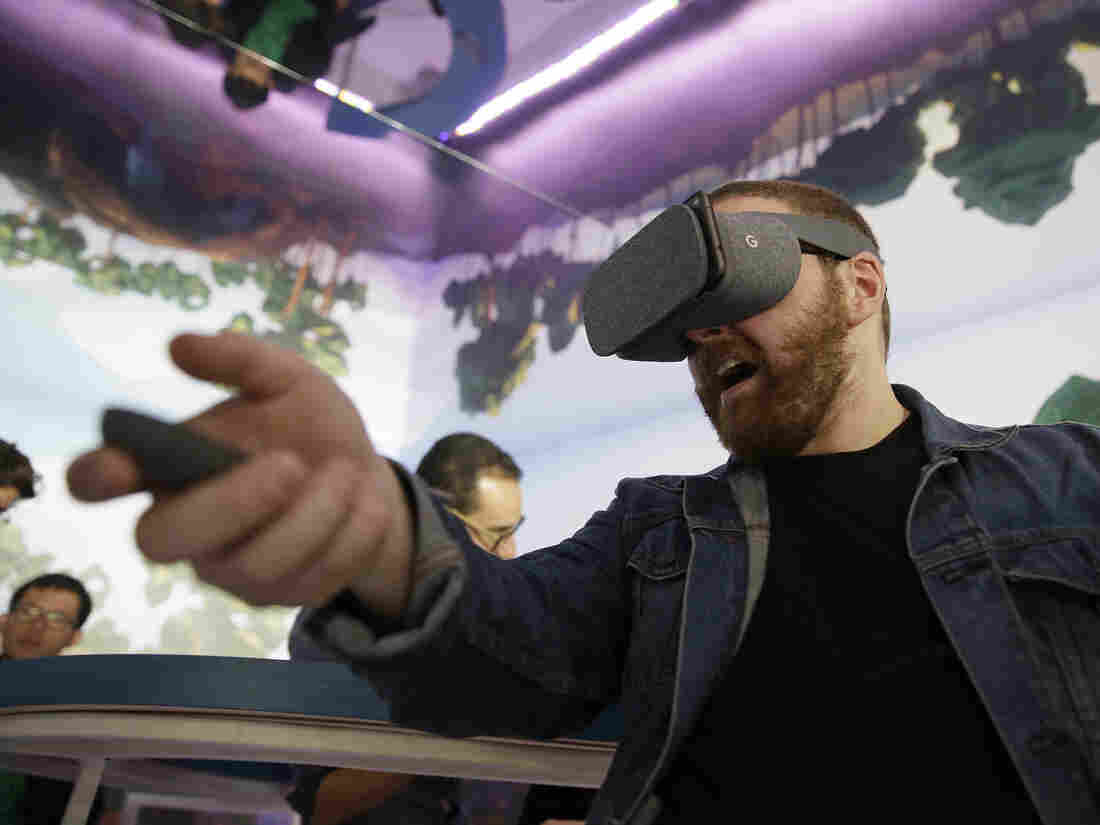 Dan Howley tries out the Google Daydream View virtual-reality headset and controller on Oct. 4, 2016, following a product event in San Francisco. This week, Google announced plans for stand-alone VR goggles that won't need to be attached to a PC or smartphone. Eric Risberg/AP hide caption 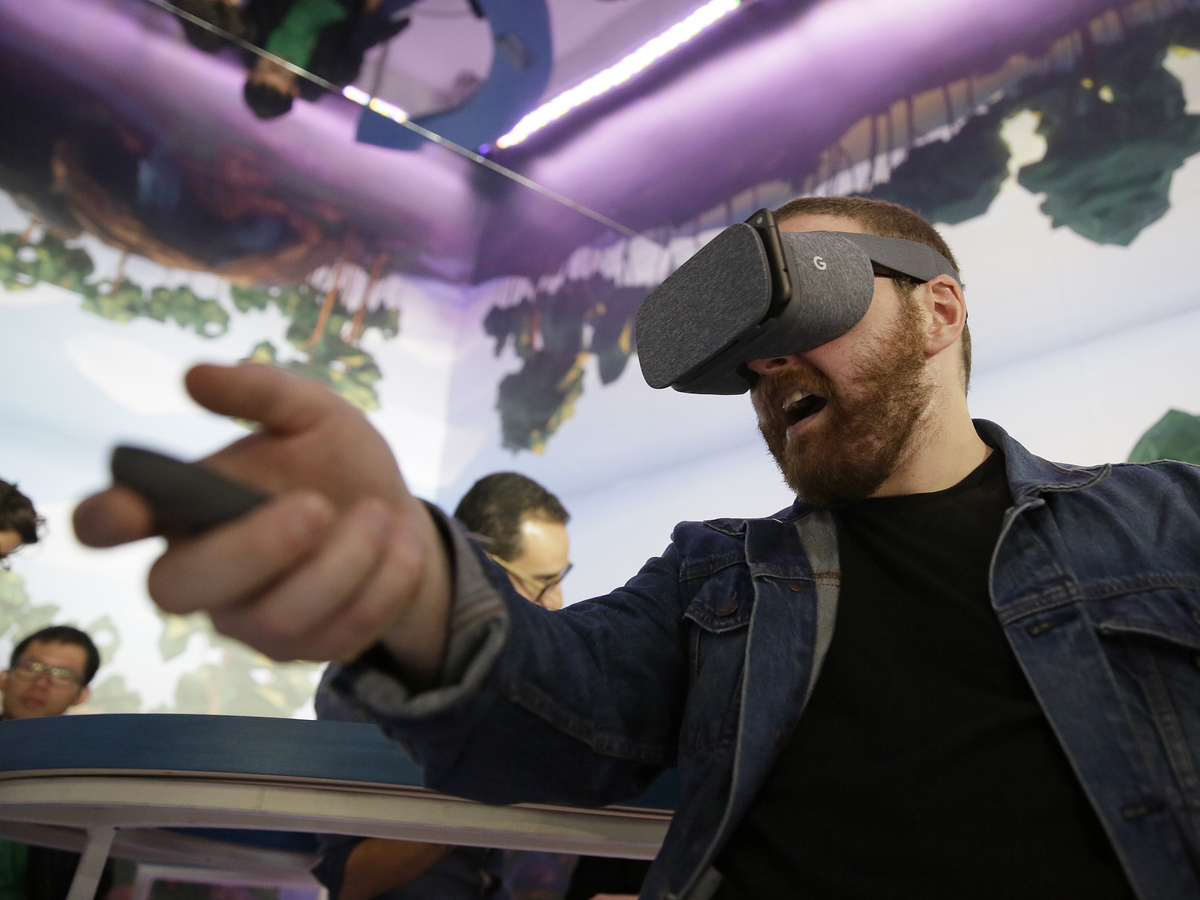 Dan Howley tries out the Google Daydream View virtual-reality headset and controller on Oct. 4, 2016, following a product event in San Francisco. This week, Google announced plans for stand-alone VR goggles that won't need to be attached to a PC or smartphone.

Google offered a glimpse of how it sees the future at its annual developer's conference this week. And it involves a lot of blending between the virtual and the real worlds using augmented and virtual reality. Google is calling that blend immersive computing.

Clay Bavor, who heads up Google's AR and VR division, says it's all part of a future where the virtual and real worlds blur.

"Virtual reality can make you really feel transported somewhere else," Bavor says. "Augmented reality can bring kind of digital information into your environment and make it really seem as if it's there in the real world."

When it comes to virtual reality other companies like Facebook's Oculus Rift, Sony VR, and HTC Vive have aimed for the expensive high end. But Google has actually reached more people with its $15 Cardboard viewer that attaches to smartphones. This week it announced plans for a more advanced VR headset.

Google will be the first major company to release stand-alone VR goggles. "Unlike systems that you have to connect to a PC or where you take your smartphone and insert it into a VR headset, everything you need for VR is contained right in the headset itself," Bavor says.

Google is partnering with HTC and Lenovo to make the headset.

Google is also beefing up its augmented reality technology. First, there's Google Lens. The technology pulls together Google's search technology and lays it over photos from the real world. You can point your camera at a flower and the search engine will identify it for you. Point the camera at a book and it will give you reviews and information about the author. Google Lens will initially be available through Google Assistant and Google Photos.

Google also announced what it's calling Visual Positioning Service or VPS. Bavor says imagine going to a large store. "You go to Lowe's and you need to find this very specific bolt. You can pull up the Lowe's app — do a search for it and then your phone will walk you step by step to the exact aisle and shelf where that bolt is," he says.

Bavor says this technology may also be especially useful to the blind. But, it won't initially be widely available. It will be incorporated into a new ASUS smartphone.

There's a lot of competition among the big tech companies to advance these immersive technologies — Facebook, Microsoft and Sony are competitors and analysts say Apple is likely to jump into the fray.

But Google has some advantages, says Greg Sterling, a contributing editor at Search Engine Land. "Because it's got hardware, it's got a massive consumer audience and brand and it's got all this data and software expertise. And really none of the other players have all those pieces," he says.

Are We Turning Into Machines?

Google is adding both AR and VR capabilities to its Chrome browser. You'll be able to switch between VR experiences quickly and of course use Google's database to identify items in the real world. For example, you could point your augmented reality-enabled phone at a restaurant and review would pop up on the screen from Google search.

But not all of Google's efforts may be destined to succeed. Take that stand-alone VR headset. Google's new VR goggles might not appeal to either high-end VR fans or the low-end Google Cardboard fans.

Brian Blau, an analyst at Gartner, says the high-end users will spend money for the power of an Oculus Rift and the low-end market may not want to spend much at all. Google says its headset might cost the same as an Oculus Rift, but will be cheaper because you don't have to buy a high-end computer too. That could be too much, Blau says.

"Because you really have to want to be an extended VR user, if you will, if you're going to invest more than $500 into one of these systems," he says.

And Google has had previous failures with augmented reality. Google Glass was a flop with consumers because the company didn't think through the privacy implications.

Google's VR headset will be out the end of this year and so will new augmented reality-capable smartphones. There's still no word on price.