Accessibility links
Social Site Gab Attracts Far-Right Users Who Feel Sidelined By Mainstream Social Media : All Tech Considered Criticized for being affiliated with the alt-right, the social site Gab now reports 170,000 users. It has found a niche among some conservatives and others who feel stifled by Facebook and Twitter. 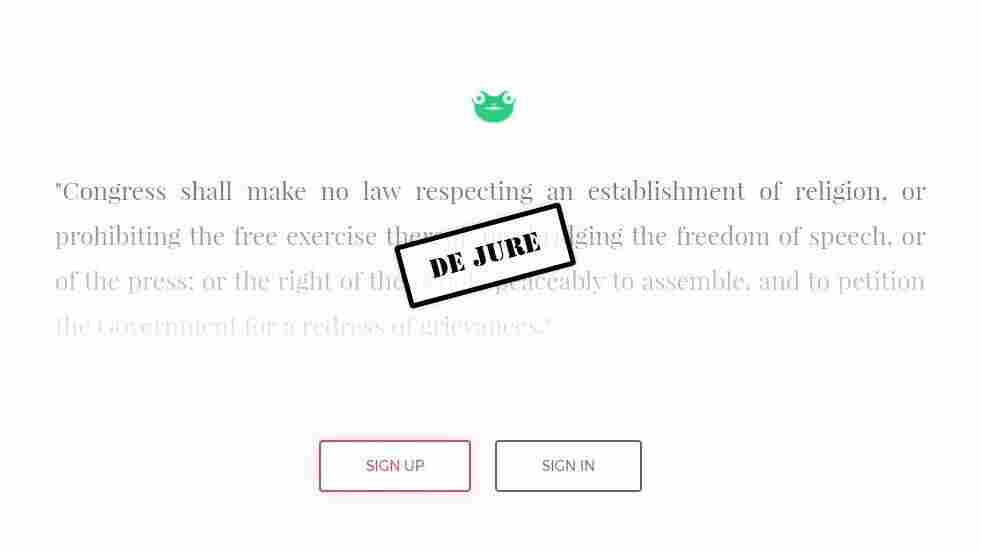 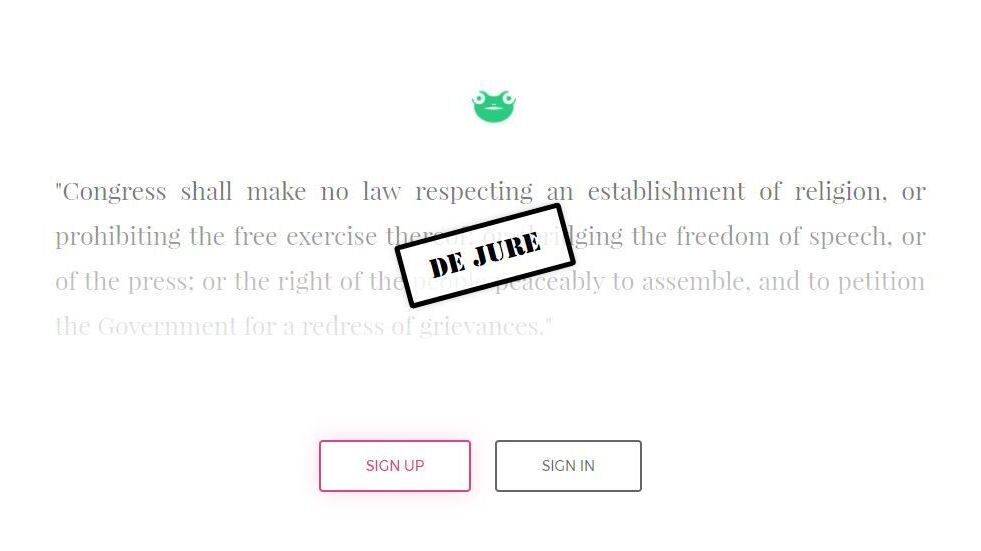 The Gab.ai home page cites the First Amendment of the U.S. Constitution.

A new social network has grown quietly in recent months. It's called Gab, and its users are invited to #SpeakFreely — an appeal attractive to many members of the far right and others who feel their views are stifled by mainstream sites like Twitter and Facebook.

Gab.ai was born not long before the election, a brainchild of a young CEO in a "Make America Great Again" hat, taking on what he calls "the Big Social" with a motto "Free Speech For Everyone." While Facebook and Twitter are attempting to clean up offensive content and misinformation, Gab CEO Andrew Torba argues the efforts result in censorship.

"For whatever reason, we're shying away from individual liberty, individual responsibility to this nanny-state, Big-Brother-esque forum or model of the Internet, which is really scary to me," Torba said in a recent conversation with a commentator on YouTube.

Instead, Gab makes the case for people to be able to post whatever they want, as long as it's legal. That means the site's user guidelines prohibit very few types of posts: illegal pornography, threats of violence or terrorism, confidential information of users without their consent.

Shortly after Gab launched, a Wired article described the site as "an artifact from a dystopian universe where the alt-right completely took over Twitter." The alt-right has been associated with racism, anti-Semitism and misogyny.

Richard Spencer, the white nationalist and a major "alt-right" figure, was suspended from Twitter in November along with several other alt-right figures. "To be honest, I don't know what I'm going to do," Spencer said in a follow-up YouTube video. "There's obviously Gab, which is an interesting medium. ... I think that will be the place where we go next."

A wave of news stories followed. The New York Times described Gab as "a digital safe space for the far right." A Salon reporter asked Torba about Gab's logo — a green frog dubbed Gabby: "I suspected it was a reference to Pepe the frog," the reporter wrote, referring to the Internet cartoon character that's been associated with the alt-right, neo-Nazis and white nationalists. Torba says the Gab frog is a religious reference, a symbol of exodus and rebirth.

What Pepe The Frog's Death Can Teach Us About The Internet

At the time, in the fall, Gab was invitation-only. Thousands of people were said to be on the wait-list. "Gab is less than a month old, so it may well flame out like Peach or Ello," Wired's Emma Grey Ellis wrote in that September feature.

Earlier this month, Gab.ai opened to the public. It is funded with users' contributions. In a post on Medium on May 8, Gab leaders shared the latest statistics: "In under nine months, 170,000 Gabbers have 7.6 million posts and raised $145,000 to help us expand our team and cover operational expenses." 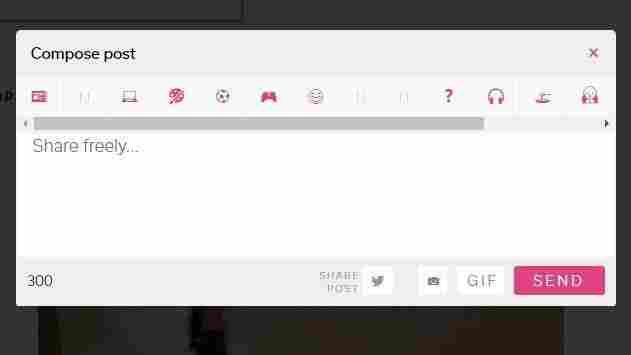 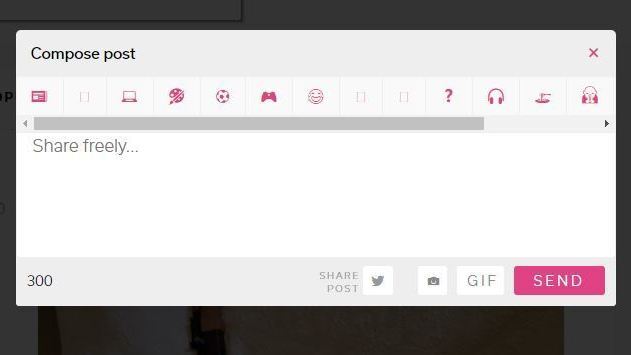 "I want a buffet"

Visually, Gab sort of combines some of the features of Twitter, Reddit and Facebook. You can follow people and repost or comment on anything anywhere. Posts are restricted to 300 characters and can be upvoted by the community. Gab has developed an Android app, but Apple has so far rejected the social network from its app store.

There are permanent categories like "Cuisine" or "Sports" and sort of trending ones, called "Live Topics," like "Julian Assange" or "Seth Rich" (both reflecting the latest news cycles). Before Gab got rid of trending hashtags, #MAGA, #gabfam and #Trump were the virtually permanent mainstays.

There are no bans on hate speech or harassment (and language does fly freely). The users have the option to "mute" whatever people or terms they want. In the wild, without muting or following particular people, a random scroll through categories on Gab is a roller-coaster of posts: Some benign ones (a chicken recipe, a prayer in support of President Trump, some links to music clips), then a startling one (a photo of a group of Klansmen, the Leo Frank lynching), then back to regular Internet lore (a dog video, a Saturday Night Live skit). Throughout it all, there's a tremendous amount of debate over news, with a heavy dose of conspiracy theories.

"Even when you have a bunch of people that are anti-politically correct and, you know, 'things were better in the 50s' or whatever the case ... people you might call alt-right, there's a much bigger group of people that aren't that," says Ryan Donker.

I originally saw him posting in the science topics on Gab and later followed him on Twitter. His online handle is @TruckDrivinRyan — he drives 18-wheelers for a living.

"As a local driver doing port work, I have a lot of down time. Most of my day is sitting at the port waiting for a box to be taken off or put on," Donker says. "It's times like that when I'll go on the Internet, goof off with people, read up on interesting things, get into arguments — whatever I can do to pass the time."

Donker describes himself as libertarian. He says Trump is better than Hillary Clinton but he does not always agree with the president. Donker is also openly gay. His partner is an immigrant. On Gab, he says he's faced off with a few haters — but that's what he likes about it: He says here, people are laid bare.

"You know, this social media starts as a place to be free and open and share a bunch of thoughts and ideas all willy-nilly is the way it should be," Donker says. "I don't want you to feed me — I want a buffet, where I can pick what I want. I don't want an algorithm to control my news feed, I want to decide for myself." 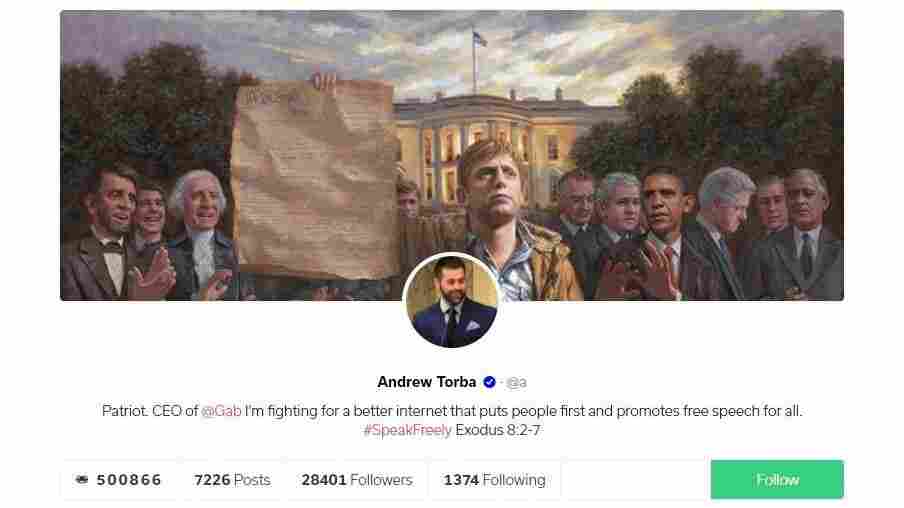 Enlarge this image
Gab.ai/Screenshot by NPR 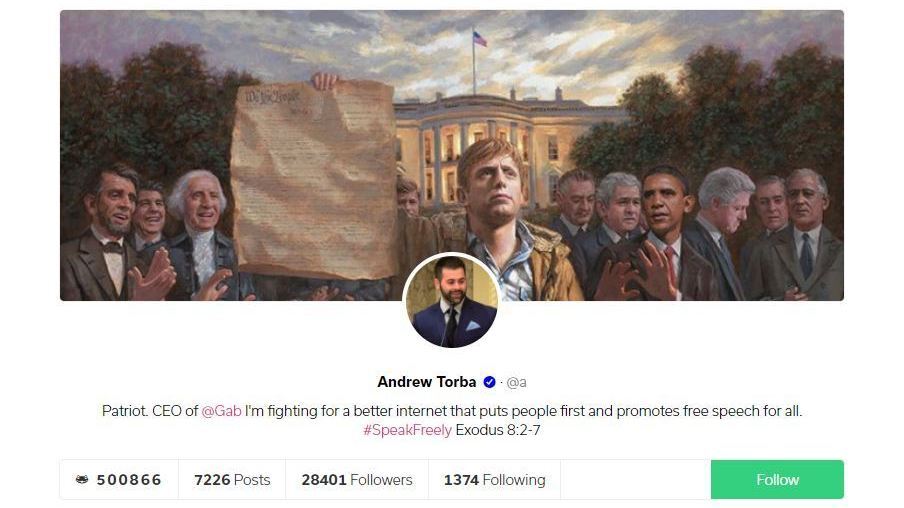 As told by CEO Torba, Gab's birth dates to the controversy over Facebook's sidelining of conservative-leaning topics from the "Trending" display.

"That's when I saw the opportunity to ... step up and defend free speech, defend individual liberty, defend the free flow of information that I saw under attack," Torba says in the recent YouTube video, in which he also describes feeling "like a minority" in Silicon Valley "as a conservative, as a Christian, as a straight white male" in a place that's "very far-left, very progressive and very liberal-minded." (He now lives in Austin.)

Craig Combs, a poet and writer from Michigan, says he felt Facebook was dominated by the liberal left. He says his posts there would regularly get removed, which he attributes to censorship. "It was almost like being thrown into a timeout corner as a child," he says. "I'm 48; I don't need to be treated this way."

Combs says he first heard about Gab from David Seaman and other YouTubers as he followed the "pizzagate" conspiracy. (Combs does not believe mainstream fact-checking and news sites that have debunked the rumors, and in an email said the story "has the potential to get very, very huge indeed.") He quickly shifted to the new platform, and describes himself as an "avid poster."

"At first, I will be frank, it was a little culture shock for me," he says. "Going from the liberalism of Facebook and having to adjust to that culture, then going to Gab — which frankly, even four months ago was very different than it is now. ... It was like a conservative exodus from Twitter."

Combs says he is not conservative — he has conservative values, but he describes himself as a libertarian, an "independent thinker," and he is also gay.

"I was at odds quite a bit over that," Combs says. "I have encountered several people on Gab when I first started, I will be very frank, there is a very conservative thread that runs through that platform. And I think they're starting to get it that they're not there to control the conversation."

Combs and Donker both say Gab's decision to "open the floodgates" is already helping to add diversity of views to what they both assume was the original crowd of hard-line conservative Republicans.

But are there any liberals? Donker laughs. "There are a few," he says, later adding: "I've never heard anybody say they support Hillary. But then again, Gab is a big place."

Editor's note: One change has been made to the Web version of this story. Earlier, we wrote that Craig Combs maintains his belief in the debunked "pizzagate" stories. It now simply quotes what Combs said in an email to NPR, that the "pizzagate" story "has the potential to get very, very huge, indeed."