Accessibility links
Before Silicon Valley, New Jersey Reigned As Nation's Center Of Innovation : All Tech Considered Silicon Valley is known as the nation's tech hub, but decades ago New Jersey had that distinction. The state was once home to Thomas Edison's lab and Bell Labs, the home of Nobel laureates. 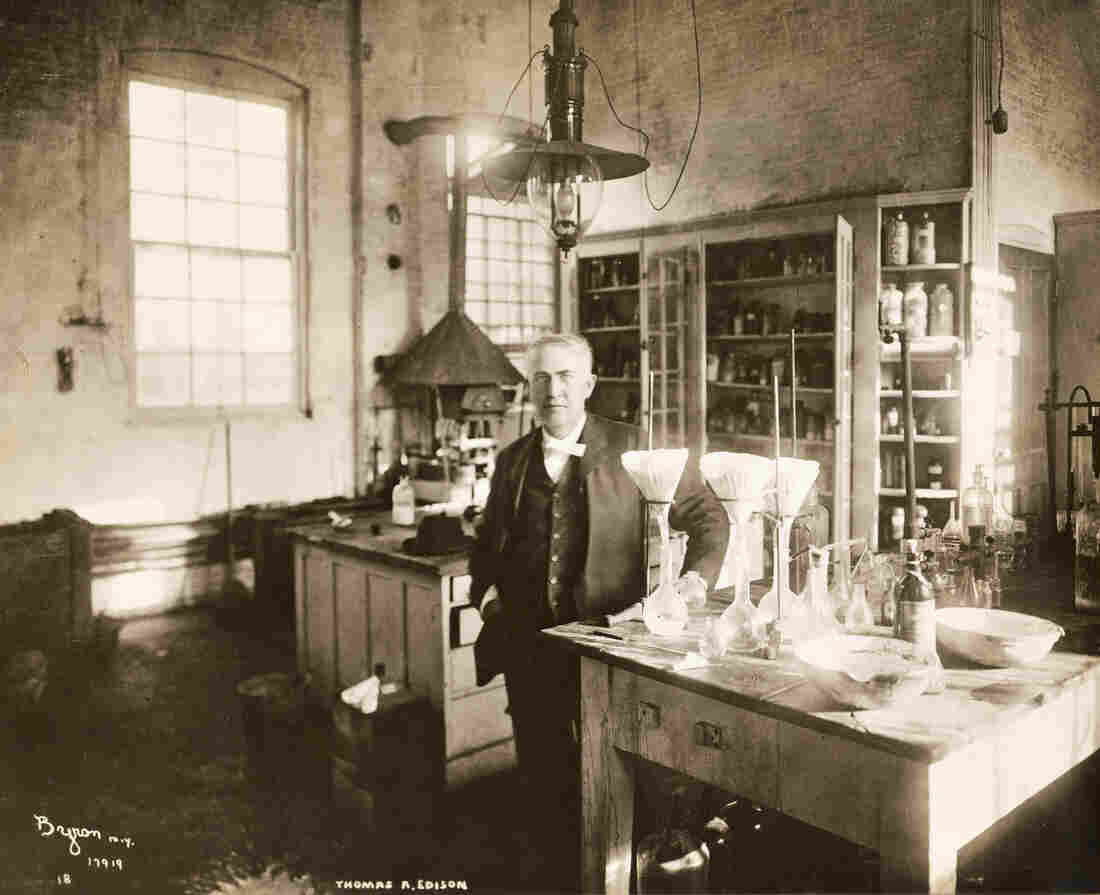 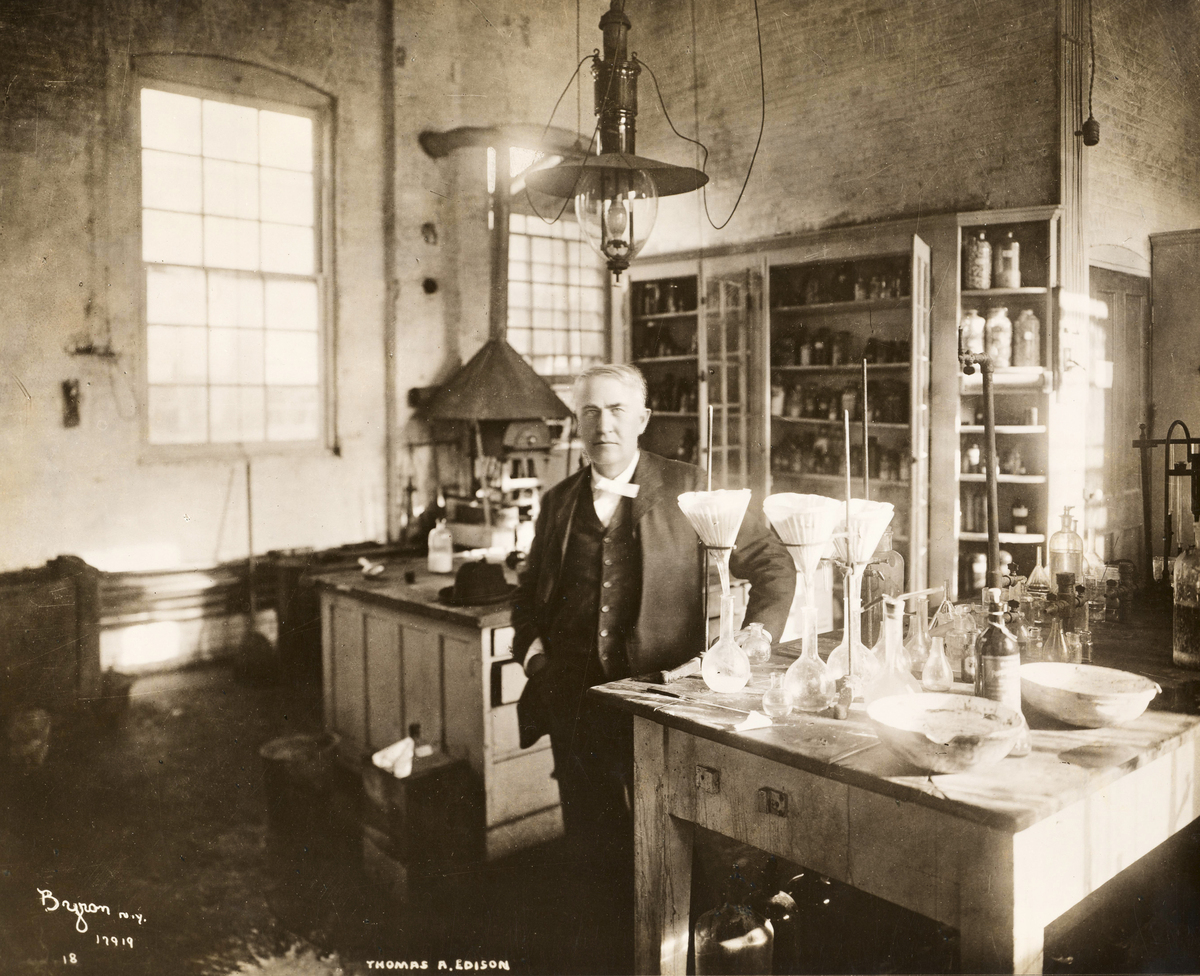 Inventor Thomas Edison stands in his chemistry lab in West Orange, N.J., in 1904.

People from New Jersey are used to defending their state.

But, in fact, New Jersey has a history to brag about. Thomas Edison invented the light bulb, the phonograph and the movie camera there. Many decades later, Bell Labs invented the transistor in the state.

Geography favored New Jersey. On one end, it borders New York City, and on the other end is Philadelphia. That means easy access to Wall Street financing, transportation and industry headquarters.

It all started in the 18th century, when Alexander Hamilton took one look at the plunging Passaic River waterfall in Paterson and his eyes lit up with dreams of industry. That came true for silk, textiles and locomotives. Then in 1870, a smart young inventor named Thomas Edison set up shop in Newark.

"Edison has the resources," DeGraaf adds. "He could live and work anywhere, and the fact that he decides to stay in New Jersey I think says something about how he perceived New Jersey as a good place for him to set up laboratories and build companies and manufacture his inventions."

Edison moved a bit south to Menlo Park, and, like a literal precursor to many a cartoon character, a light bulb lit up. The light bulb was one of his more than 1,000 patents. By the time he was working away on his phonograph and his moving camera, Edison had invented a new way of inventing itself. 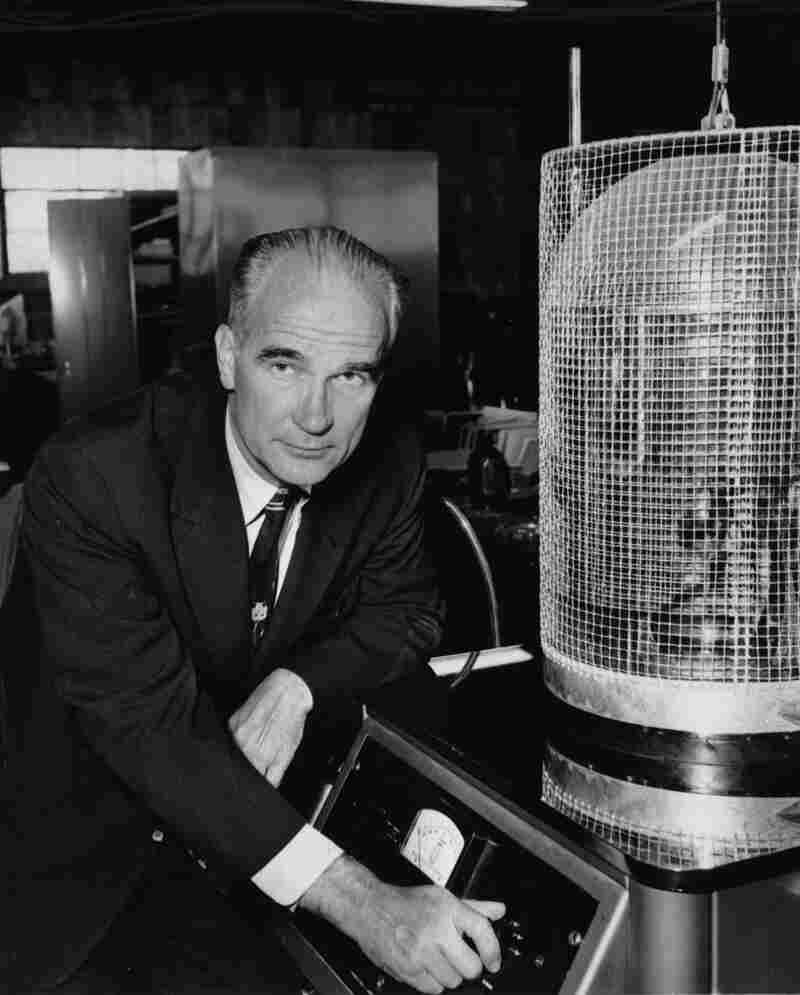 Dr. William Shockley, co-inventor of the junction transistor which revolutionized the field of electronics by replacing the vacuum tube, poses in his lab in California on Nov. 1, 1956. AP hide caption 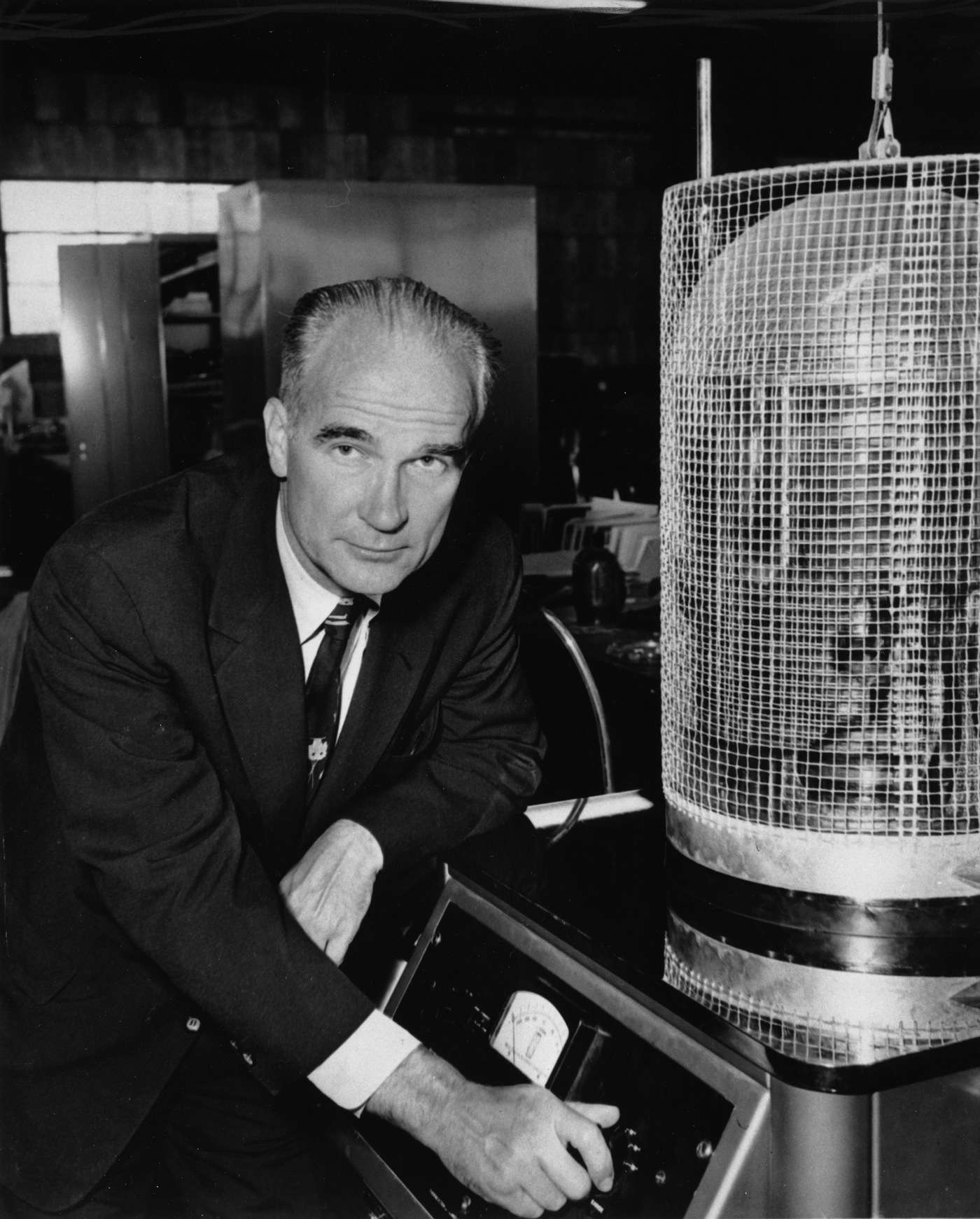 Dr. William Shockley, co-inventor of the junction transistor which revolutionized the field of electronics by replacing the vacuum tube, poses in his lab in California on Nov. 1, 1956.

"He creates the first industrial research and development laboratories and brings it within the corporation," DeGraaf says.

In other words, Edison invented the modern lab — teams of people working together, sharing ideas and perfecting devices. In the century after Edison, New Jersey became the place to set up shop if you wanted to invent. On top of all the other assets, the state had lots of inexpensive land available.

That's what made it attractive to Bell Labs. It spread out over several sites in the middle of the state and created many of the technologies that paved the way for 20th century inventions. One of its former facilities, which once held 6,000 engineers and researchers, is in the suburb of Holmdel.

"We perfected cellular communications in this building," says Edward Eckert, a Bell Labs corporate archivist. "Even before this building was built, we used this property for wireless research — transatlantic radio, telephone, microwave."

And not too far from there a group of Bell Lab scientists discovered the transistor — the root technology of all silicon chips.

So why didn't Silicon Valley rise up in New Jersey? Johns Hopkins professor Stuart Leslie, who studies the history of science and technology, says it should have.

"If you were going to place a bet on whether it was going to be New Jersey or Northern California and you placed that bet, say, in 1950, where would you put your money?" Leslie says. "You'd obviously put it on New Jersey."

But a migration happened west because, as Leslie puts it, the East Coast had become "insular, isolated, self-contained."

Plus, big companies such as Bell Labs, demanded their employees remain loyal to only them.

"In California, the expectation that you would stay with a company for more than five years would be unusual," Leslie says. "And the expectation would be, in fact, that you may very well start your own company." 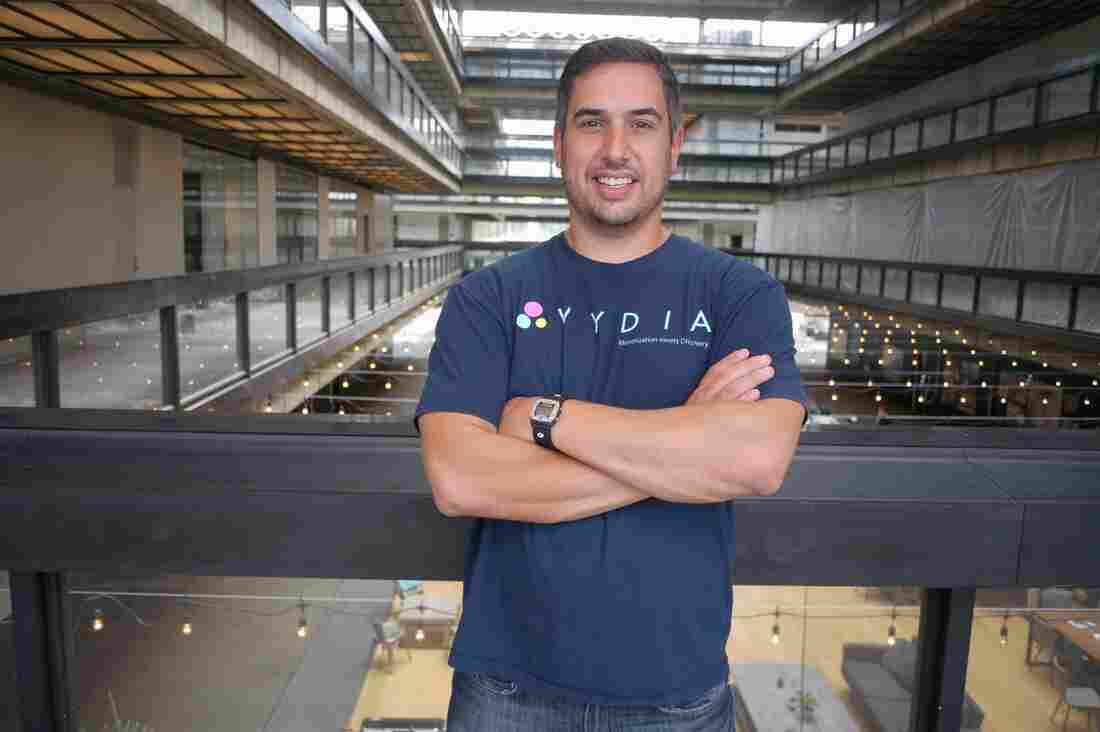 Vydia CEO Roy LaManna is in awe of what Bell Labs invented in the space he now partially occupies. Vydia hide caption 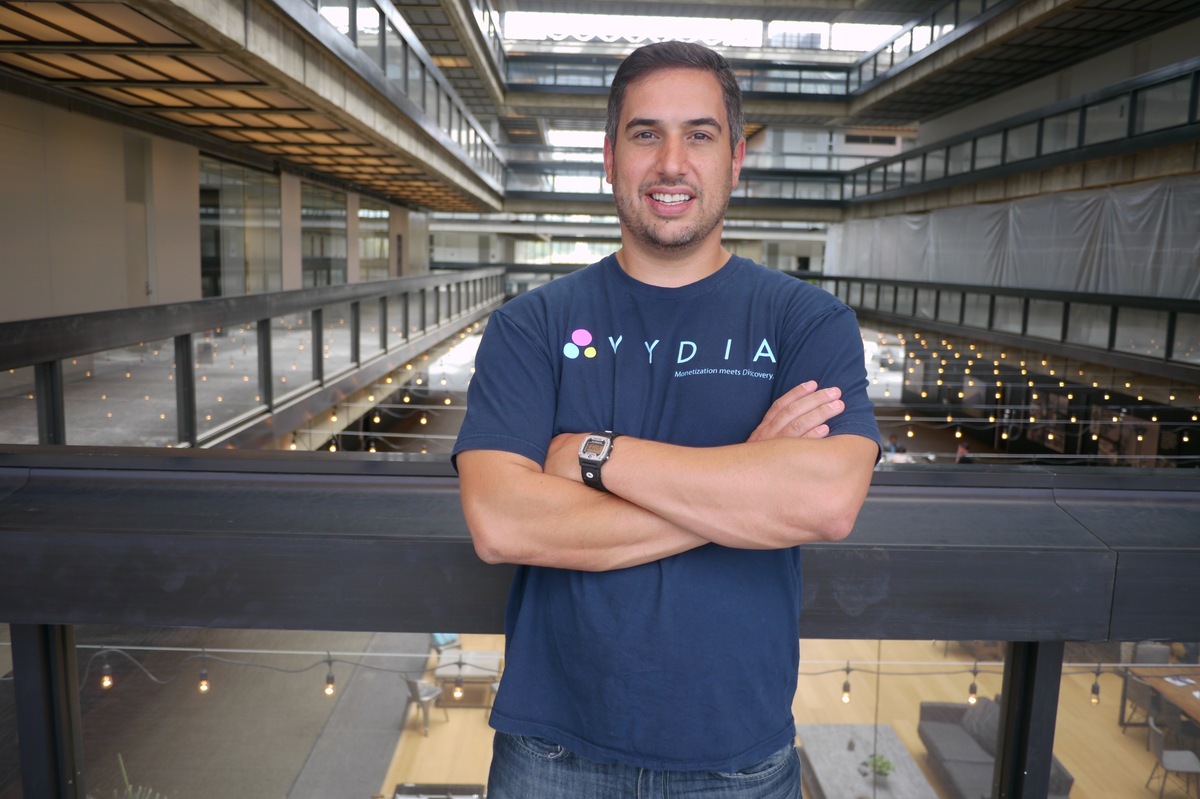 Vydia CEO Roy LaManna is in awe of what Bell Labs invented in the space he now partially occupies.

Some cultural differences were also shaped by the law. New Jersey has strict anti-competitive laws that make it hard to take what you learn at your job and create a new company. William Shockley, one of those brilliant Nobel laureates who invented the transistor, moved to California to open his lab in Mountain View, the current home of Google. His employees also left to found their own companies.

It's not entirely fair to say innovation has vanished from the Garden State. New Jersey ranks 11th among the 50 states for tech industry employment, according to tech association CompTIA. But the excitement and experimentation surrounding Silicon Valley is but a whisper in New Jersey.

That Holmdel facility where Bell Labs perfected cellular communications is being redeveloped as a hub for startups like Vydia. It's a company that helps people make money on videos they post on social media.

"I'm from New Jersey, and I grew up in New Jersey," says Vydia CEO Roy LaManna. "I think it's becoming a tech hub because it was a tech hub. ... There's almost like no doubt in my mind that that's gonna happen. It just feels like something is happening here."

There's a lesson in what happened to New Jersey. Technology centers can shift and change. Bell Labs rested on its laurels; maybe it was a little smug. Nothing lasts forever. Smugness is not a New Jersey exclusive.