Accessibility links
After CEO Resignation, Is Uber Kalanick-less Or Kalanick-free? : All Tech Considered Few companies have had such a rapid fallout from such a vast number of crises stemming from the workplace culture perpetuated from the top, while appearing to be at the peak of its success. 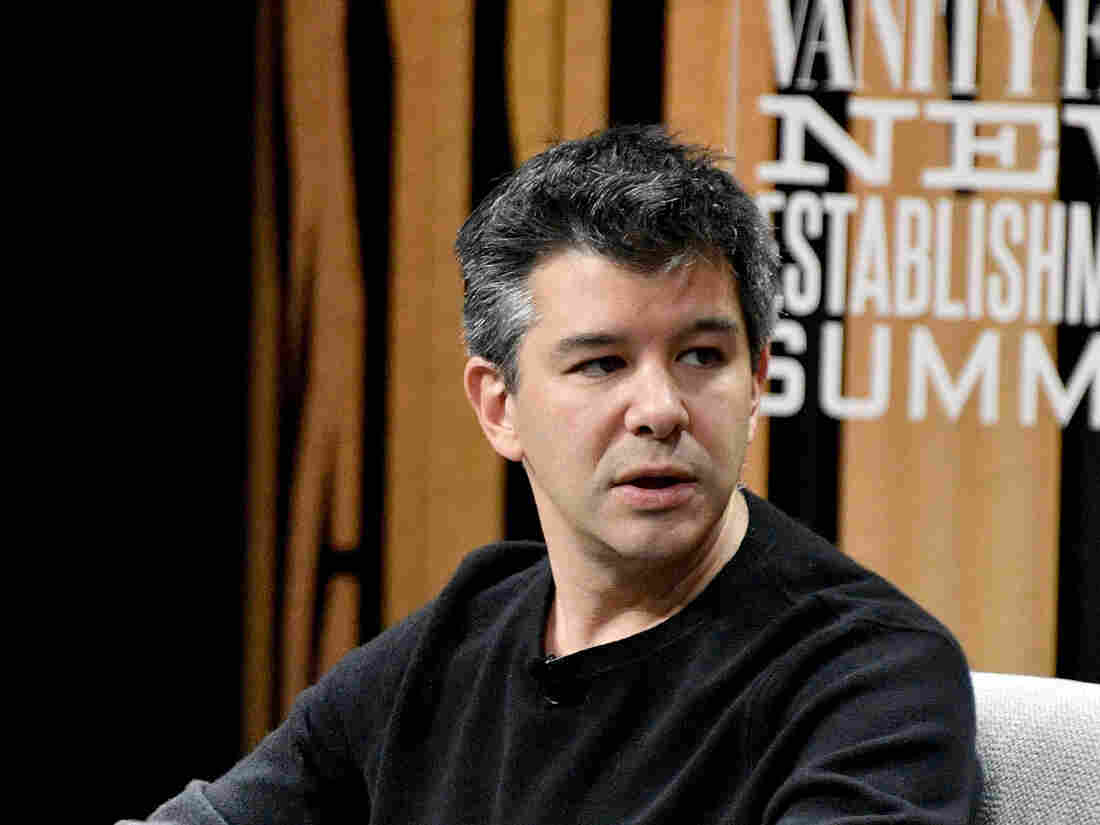 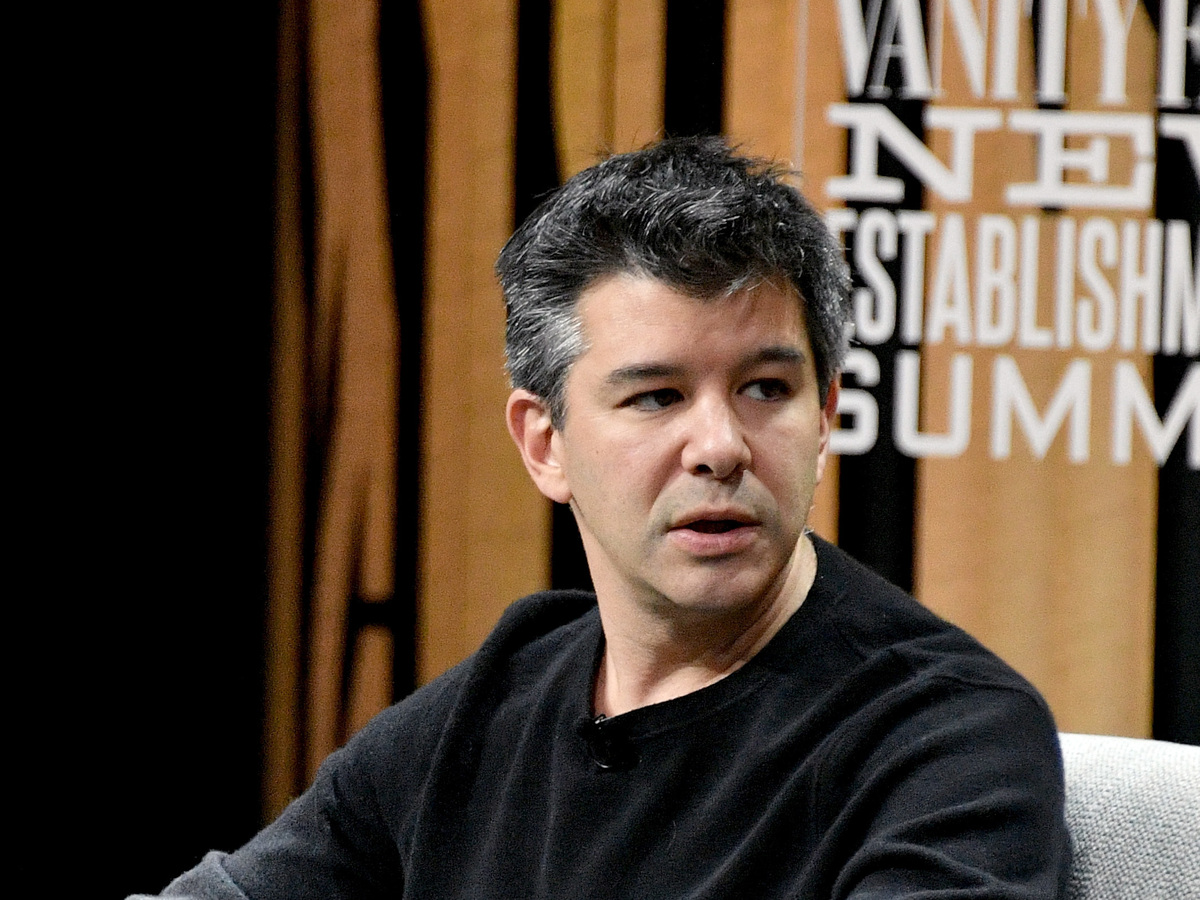 Uber co-founder Travis Kalanick, pictured here at a Vanity Fair summit in October 2016, resigned abruptly this week as the company's CEO after weeks of scandals about workplace culture.

If you think of a company as a sports team — let's say, basketball — then Uber is at a point where the players are still on the court, but the coaches and general manager are gone, the arena is filled with jeers and the owner's hair is on fire.

The resignation of co-founder Travis Kalanick as CEO under pressure from investors (instead of the originally announced leave of absence) is only the most dramatic of various dramatic turning points in the disorderly narrative arc of Uber. And though business annals are rife with powerful founders who were forced to leave their companies, such stories typically hinge on poor financial results or wrong business decisions.

Few companies have had such a rapid fallout from such a vast number of crises stemming from the workplace culture perpetuated from the top, while appearing to be at the peak of their success. (Uber is one of the largest privately held companies, valued at nearly $70 billion.)

How long will Kalanick's shadow be over Uber's future?

In a statement, Uber's board of directors said the departure of Kalanick — who was at the helm for more than six years — will give the company "room to fully embrace this new chapter in Uber's history."

And the slate is remarkably clean thanks to an exodus of executives in recent weeks as the company shed employees amid the very public airing of stories involving sexist HR practices, sexual harassment of female employees, rampant bro culture and immaturity, shady skirting of regulations, lawsuits by drivers and allegations of intellectual-property theft.

What does history teach about turning around a company in turmoil with an empty executive bench?

"I think that the people who are now in charge — and the question is who is really in charge ... — that better get sorted out pretty quickly," says Rosabeth Moss Kanter, a professor at Harvard Business School and expert on corporate leadership. "That's the real historic lesson, that you need to move quickly or you're highly vulnerable. ... It's a perfect time for competitors to start poaching the best executives, for morale to go down, because even staff who have great ideas aren't sure they can implement them."

What Uber is to its consumers is ... whatever driver they get, Uber is the app on their smartphone. Uber is not Travis.

The Uber board had already been searching for a chief operating officer — a more seasoned executive who might tone down the volcanic Kalanick as CEO. This call followed a pledge from Kalanick to "grow up" after a leaked video showed him berating an Uber driver, who complained to him about pay. According to Recode, the board had considered former Disney Chief Operating Officer Tom Staggs, Helena Foulkes from CVS and various executives of media and transportation companies.

Investors are also calling on Uber to hurry up and hire a chief financial officer — a position that's been vacant since 2015. Uber has also lost executives from its product, engineering, mapping, communications, business, finance and self-driving units.

"Clearly there was a terrible workplace culture ... terrible enough for a lot of these people who are highly competent individuals to want to go," says Valerie Demont, a lawyer at Pepper Hamilton who represents companies undergoing restructuring. In other words, the exodus is also a reflection on Kalanick's ability to pick and retain talent.

But is he really leaving?

Kalanick is a polarizing figure. He's come to personify both Uber's toxic cowboy culture, but also its phenomenal business growth. On Friday, before his abrupt resignation, NPR asked an early Uber investor Jason Calacanis what he thought of the CEO.

"Indefatigable, phenomenal, unlimited upside," Calacanis said. "I think he has another 20, 30 years ahead of him as founder, and I think the company can grow 10x from here, 20x from here. I think he's going to wind up being one of the top 10 CEOs that Silicon Valley has ever seen."

Kalanick's resignation comes as a surprise to employees and people close to the company. Notably, he and his close allies have majority voting shares in Uber, which means he could have fought it. He's known for not caving. But here he did cave, under tremendous pressure from large, powerful Silicon Valley investors.

One tricky thing is that technically, Kalanick isn't leaving for good. His large stake in the company keeps him on Uber's board of directors — the same board that will search for his and his team's successors.

The Investor Who Took On Uber, And Silicon Valley

"I would like to know who's heading the search and how much independence they'll have and how much veto power Travis will have," Harvard's Kanter says.

She predicts Kalanick's successor might be someone unexpected, someone seasoned and, notably, someone with a "calming presence" — again, because Uber's turnaround will be not financial, but cultural.

Stories of other ousted CEOs include the famous departures of Steve Jobs from Apple or Jack Dorsey from Twitter — both of whom later returned to the companies they helped found. This has spurred speculation of Kalanick doing the same.

"What Uber is to its consumers is ... whatever driver they get, Uber is the app on their smartphone," she says. "Uber is not Travis. In fact, most people can't even pronounce his name, let alone know who he is."