Accessibility links
Facebook Changes Its Mission With Announcement About Groups : All Tech Considered Facebook has nearly 2 billion users. But that's not enough. Now, in an effort to go deep, not just wide, the company will focus on users' activity levels. 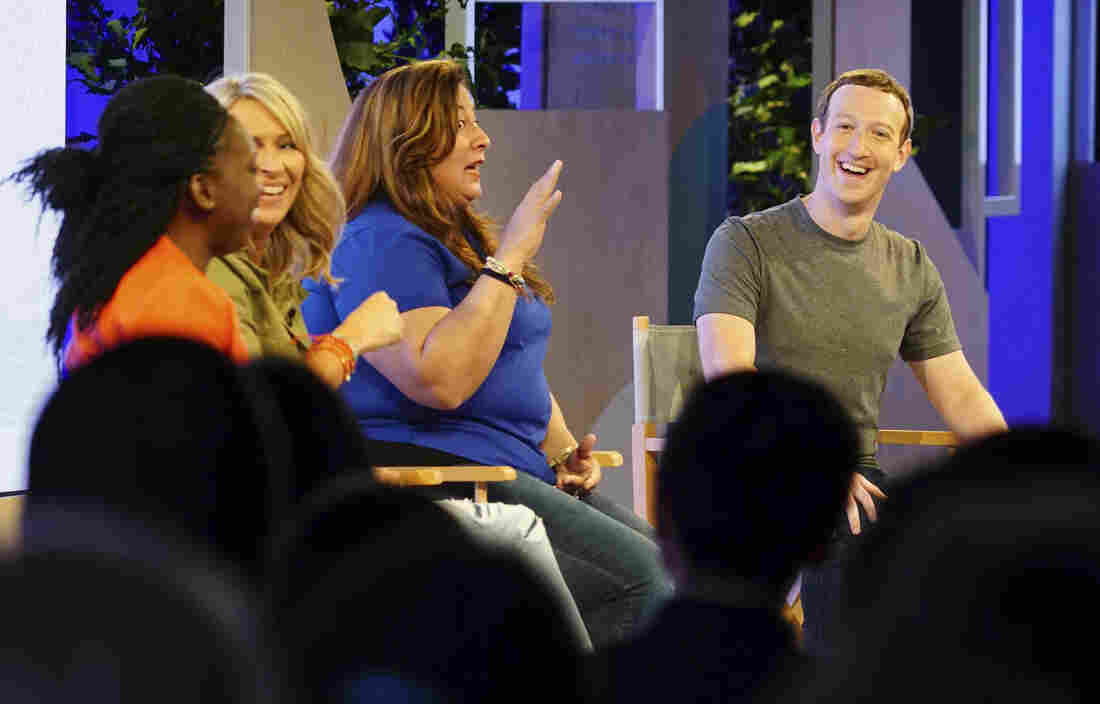 Facebook CEO Mark Zuckerberg (right) speaks with panelists at the Facebook Communities Summit on Thursday in Chicago, where he announced Facebook's mission will change to focus on the activity level of its users. From left are Lola Omolola, Erin Schatteman and Janet Sanchez, who run popular Facebook groups. Teresa Crawford/AP hide caption 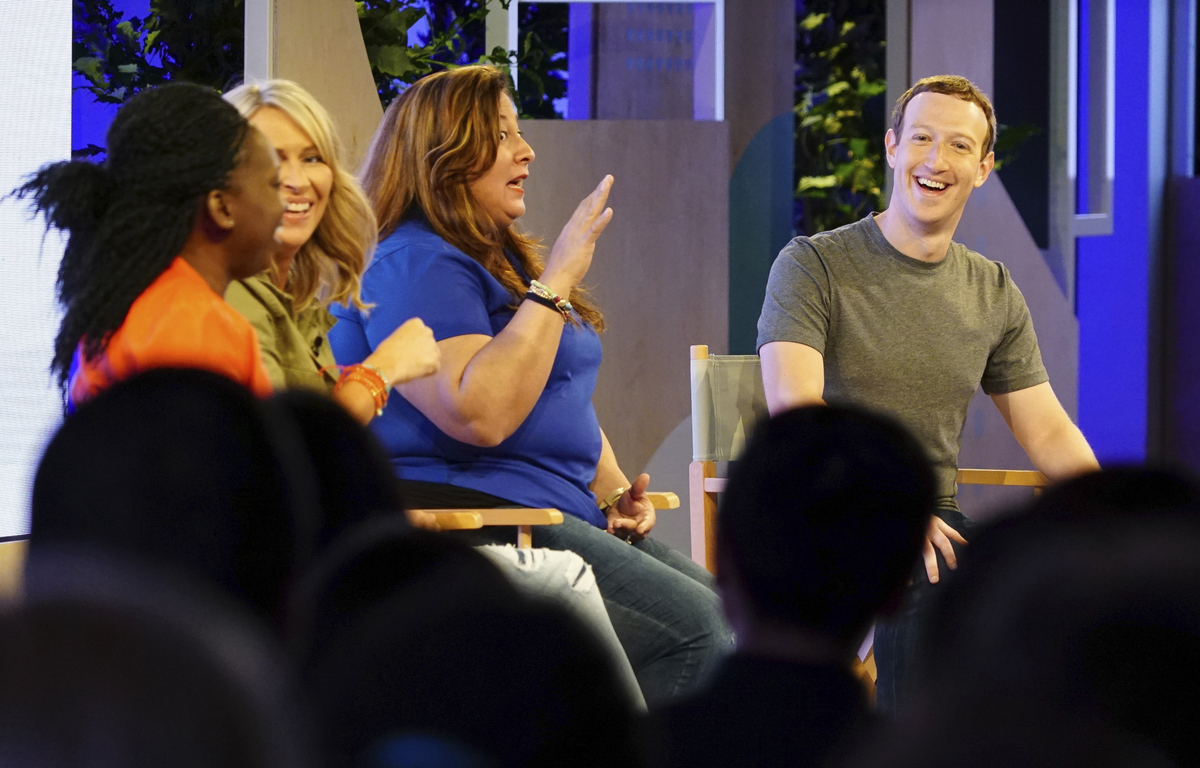 Facebook CEO Mark Zuckerberg (right) speaks with panelists at the Facebook Communities Summit on Thursday in Chicago, where he announced Facebook's mission will change to focus on the activity level of its users. From left are Lola Omolola, Erin Schatteman and Janet Sanchez, who run popular Facebook groups.

For anyone still wondering if Mark Zuckerberg plans to run for president, today should dispel that myth. It appears that his tour of America — which many speculated is an effort to score political points — was designed to give the 33-year-old CEO a chance to learn about human behavior, in the physical and digital worlds, in order for him to build a better product. He wants to turn Facebook into a place where users form popular groups and hang out together, a lot.

Zuckerberg chose a peculiar — and telling — location to announce to the world that, after much research and reflection, he is changing the mission of his company. He wasn't at his Silicon Valley campus, nestled between ping pong tables and bean bags (standard tech iconography).

He was in a warehouse in a big Midwestern city, Chicago. The location was kept a secret. And he was surrounded by 300 power users — people who have built groups with thousands or even a million members inside Facebook, such as Lola Omalola, who started "Female In Nigeria" (FIN) for women to talk openly following the kidnapping of nearly 300 school girls by Boko Haram; or Erin Schatteman, who started Mommy2Mommy, a group where women exchange baby tips and even breast milk; or Janet Sanchez, whose "Esposas Militares Hispanas" acts as a support group for military spouses.

In a 25-minute speech broadcast on his Facebook page and transcribed here, Zuckerberg disclosed that his platform has hit nearly 2 billion users. But at some point, number-dropping is like name-dropping. It gets old. The real news is not the stunning figure. It's a change in strategy: from going wide to going deep.

For the last decade, Facebook's mission has been to "make the world more open and connected." The company has been so obsessed with bringing more people onto the app, that it tried building drones to spread the Internet to the far corners of Earth.

Today, the CEO explained, Facebook's mission will change to focus on the activity levels of users, and to support the most active so that they can keep building the digital spaces that draw in the masses. In official language, the new mission is to "give people the power to build community and bring the world closer together."

The company is releasing new tools that allow people who build Facebook groups to see a bit of the treasure trove of data that the social media platform historically has hoarded — like the times of day that group members are most engaged. Users will be able to schedule a post in advance — an announcement that garnered thunderous applause.

Zuckerberg wants to get 1 billion Facebook users to join "meaningful communities." For the last six months, his team has been running an experiment to have algorithms reorganize users' digital lives by suggesting groups that may be of interest — perhaps one for nature lovers or for Christians, groups that three or four friends just joined. He explained "most people don't seek out communities in the physical world or online. Either your friends invite you or on Facebook we suggest them for you."

He posits that through these algorithm-driven groups, Facebook is helping TO save us from the social isolation of the physical world: "If we can do this, it will not only turn around the whole decline in community membership we've seen for decades, it will start to strengthen our social fabric and bring the world closer together."

The CEO did not discuss how this strategy fits into Facebook as a business, though the answer is obvious: more eyeballs means more money from online advertising. But economics was absent from the discussion. The power users featured in this first "Community Summit" do not make advertising money from their dogged efforts to build community on Facebook. While groups may become vital to the corporate strategy, Facebook does not allow advertising within the groups. When NPR asked why, a product leader said he did not know and a spokesperson said "we have nothing to share at this time."

A former Facebook employee who has written extensively about the company's growth doubts that the change in mission is a real shift. Antonio Garcia Martinez wrote, "FB once bet its financial future on Pages. It didn't turn out well. This sounds like a philanthropy project, not a business model."