Eighth graders Cristian Munoz (left) and Clifton Steward work on their Chromebooks during a language arts class at French Middle School in Topeka, Kan. Both students were eligible to bring the devices home this summer. Scott Ritter/Courtesy of French Middle School hide caption

Eighth graders Cristian Munoz (left) and Clifton Steward work on their Chromebooks during a language arts class at French Middle School in Topeka, Kan. Both students were eligible to bring the devices home this summer.

When principal Kelli Hoffman ran into her students at a McDonald's during summer break, she knew they weren't there for the McNuggets.

The two rising eighth-graders at French Middle School had invested in a Coke to unlock a bigger prize: free Wi-Fi. They sat logged into their school-provided Chromebooks studying exercise ideas from their sports coaches.

Hoffman's district, Topeka Public Schools in Kansas, is one of a rising number of systems that are letting students take their school-issued devices home over the summer months.

"It has opened up a huge educational resource to our kids who may not have access otherwise," Hoffman said.

Carrie Grant, who graduated this year from the Lammersville Unified School District in California, said having a device last summer made her life easier. Without the school computer, she wouldn't have had her own laptop to work on.

She used it to stay connected with friends through her school's Google Chat system and watched Netflix, but also saved time for academics.

On Kids And Screens, A Middle Way Between Fear And Hype

"Because I took summer school it was easier for me to get classes done than it was before, and I used it to apply for scholarships," said Grant, who is now choosing between colleges in Texas and Georgia.

Some see distributing school laptops as a tool to extend learning during the summer and reduce the disparities between lower and higher income students. At French Middle, nearly 60 percent of students are eligible for free lunch.

"We don't want the haves and have nots," said Kristen Landis, the director of technology for the North Penn School District in Pennsylvania, which allows students to take home their Chromebooks.

But, there is no research yet to show whether device distribution cuts back on summer slide, the learning losses most acutely experienced by lower income students during the summer when lessons from the school year are forgotten. And, no one seems to be tracking which schools across the country are implementing the lending programs.

"Summer is the most unequal time in America," said Matthew Boulay, the interim CEO of the National Summer Learning Association. "I think we tend to have this idyllic view of what childhood summers are, but the reality is that for kids living in poverty, summer can be a time of isolation and hunger."

Summer Isn't Always A Vacation For Families Who Can't Afford It

While some students head off to camps and family vacations, others are left without the resources that accompany a school year, including school lunches, sports teams and a place to go while parents are at work during the day.

Schools across the country adopting 1-to-1 device-to-student programs at rapid rates. In 2016 alone, 12.6 million mobile computers were sold for K-12 classrooms for a few hundred dollars. Some see summer lending as a way to level the playing field for students.

"We had essentially three observations: Parents could use their computers for work, students could keep up with school-related emails and services over the summer and a majority of families who participated described it as a positive experience," Ankeny School District Superintendent Bruce Kimpston said of his Iowa district's summer pilot program last year.

And the summer months, when there is no one to remind them to charge their computers, can make students more conscious about maintaining the devices.

"It gives students ownership of the device, and they take better care of the device if they have ownership," said Greater Clark County Schools Technology Director Brett Clark.

The Indiana school system also requires students to be registered for the next school year to get a device for the summer.

"It helps encourage families to register for school, which helps us out because we base our school budget on who is enrolled," Clark said.

Letting students leave for break with their laptops in hand is not enough to cut back on inequality though, New York University professor Susan Neuman said.

"One thing we too often focus on is the sexy interventions like sending home a mobile device, but those people who haven't had the experience will use them differently," she said. "In low-income groups the kids would use the games and cheap thrills [available via computers], whereas those kids that had been mentored with a parent next to them use it as a prep school in a box."

Neuman said it's important for schools to provide parents with information on the best way to use the devices. Since not all parents are equally familiar with technology themselves, schools can level the playing field by telling them about good online learning sites and best practices for limiting screen time.

She emphasized that technology runs the risk of drawing kids away from their parents instead of bringing them together during the summer.

"Parents in low-income neighborhoods want to learn along with their children and are interested in being part of the digital age," she said. "Kids shouldn't just be given the equipment and told 'go.' They should be given content recommendations along with that."

"Honestly, it doesn't matter," said Jennifer Williams, technology director of California's Fullerton Joint Union High School District. "If they are in summer school of course they will be using them for education. For the others, they will use it for what kids use it for. They will use it for games. If you take too many fun things away, they won't value the device."

Sean Alen Little, a rising seventh-grader at French Middle, said he will use his computer for his stop-motion projects this summer.

"I hope to write scripts for my movies I make," he said.

Little's mom said she let her son, who has access to other devices at home, decide whether to opt-in to the summer take-home program.

"I wanted him to take responsibility for it if he chose to keep it over the summer," Sanela Hasanovic-Little said. 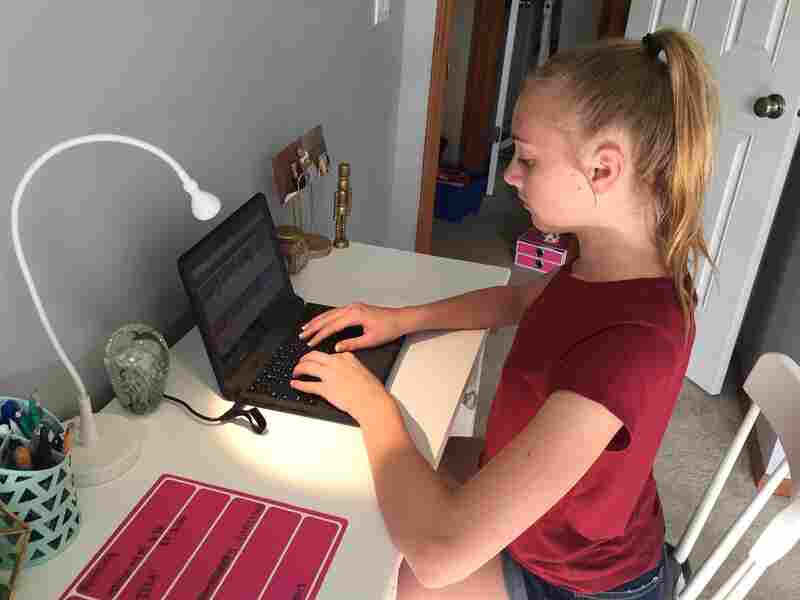 Jodi Meyer's daughter Megan, a rising ninth-grader in the Ankeny Community School District in Iowa, works on her school-provided laptop while on summer break. Courtesy of Jodi Meyer hide caption 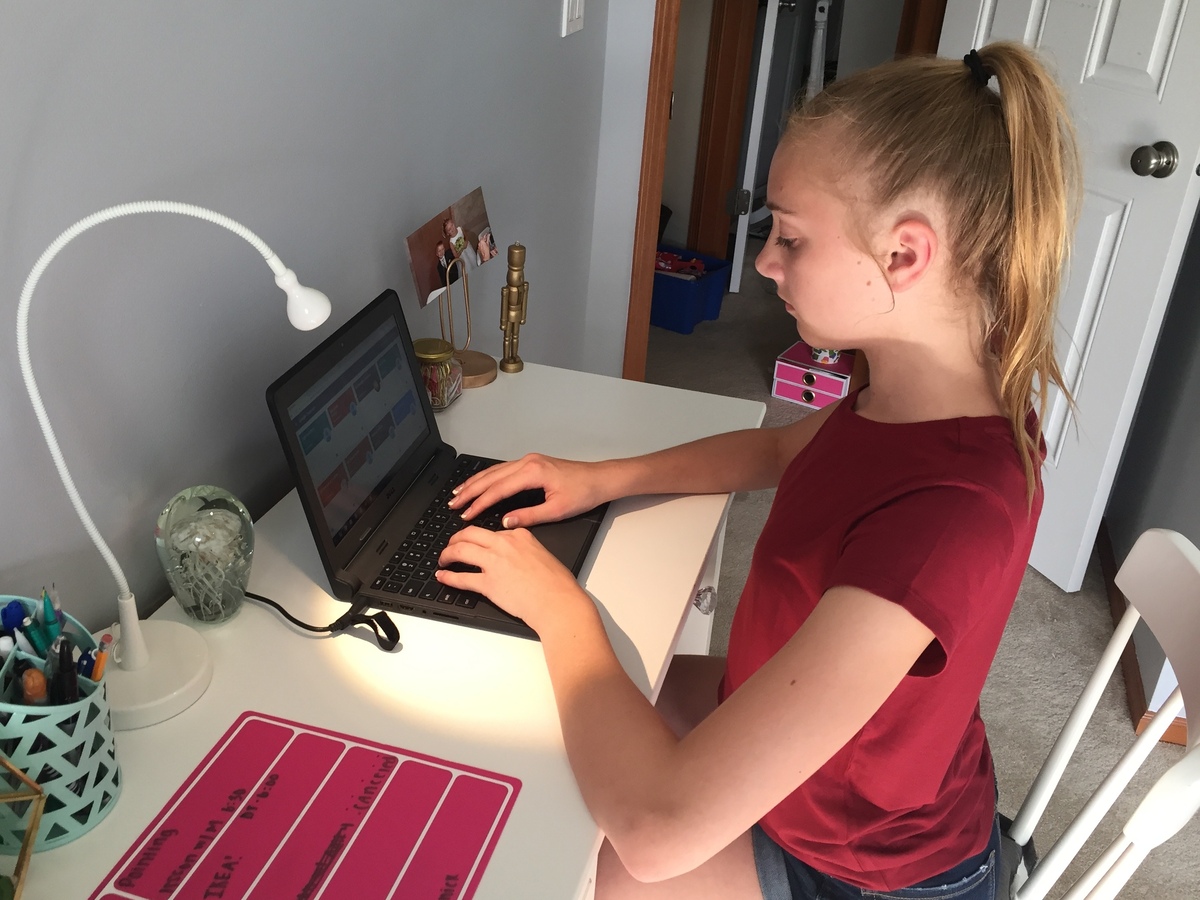 Jodi Meyer's daughter Megan, a rising ninth-grader in the Ankeny Community School District in Iowa, works on her school-provided laptop while on summer break.

The National Summer Learning Association's Boulay, who has 11- and 14-year-old daughters, said it's important not to make summer learning punitive or mandatory, but instead to see summer as an opportunity to get away from the constraints and norms of what happens during the school year.

Jodi Meyer, a parent and teacher in Ankeny, Iowa, said her son's teachers gave him summer exercises to do on the educational site Edmodo. Boulay has his kids log on to Duolingo and Khan Academy each day on break.

Some school systems are still deciding how to handle student devices when school's out.

Administrators and teachers in the Fullerton Joint Union High School District decided there were compelling reasons for students to have the district's new devices and reasons they should be left at school.

"Rather than say one way or the other without data to support either one, we said we will try it in different ways in different schools and see at the end of the summer," said Williams, the district's technology director.

They let the schools decide whether they wanted to check them in, check them out, or just give them to summer school students.

Williams said collecting Chromebooks is not as simple as throwing textbooks on a shelf. The devices have to be stored in air-conditioned rooms and carefully tagged for reissuing.

But, checking them out means someone must be available for repairs over the summer.

"We will know at the end of the summer if one was a bad decision. We are hoping that it will be clear what will be the best way to go," Williams said.