Accessibility links
In China, A Cashless Trend Is Taking Hold With Mobile Payments : All Tech Considered Consumers there are finding convenience and security in using smartphones to pay. An estimated $5.5 trillion was spent through mobile platforms in 2016, about 50 times the amount in the U.S. 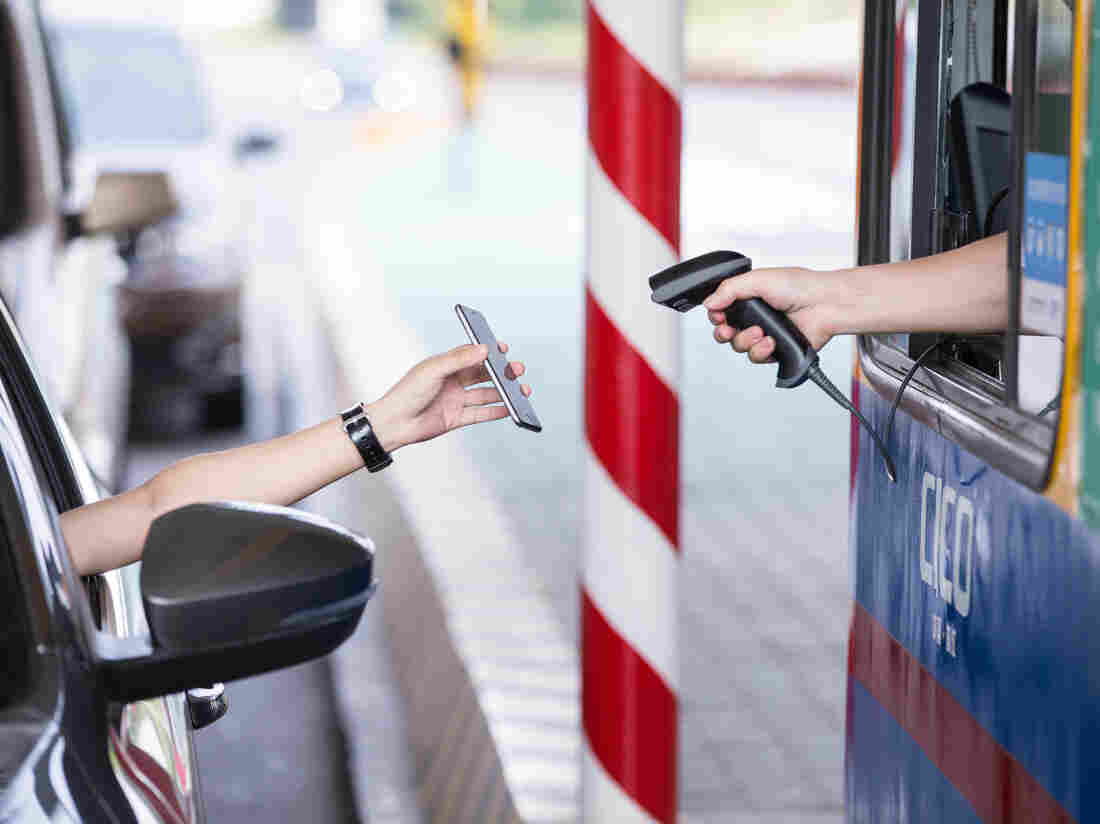 A driver uses his smartphone to pay the highway toll with Alipay, an app of Alibaba's online payment service, in the Chinese city of Hangzhou. STR/AFP/Getty Images hide caption 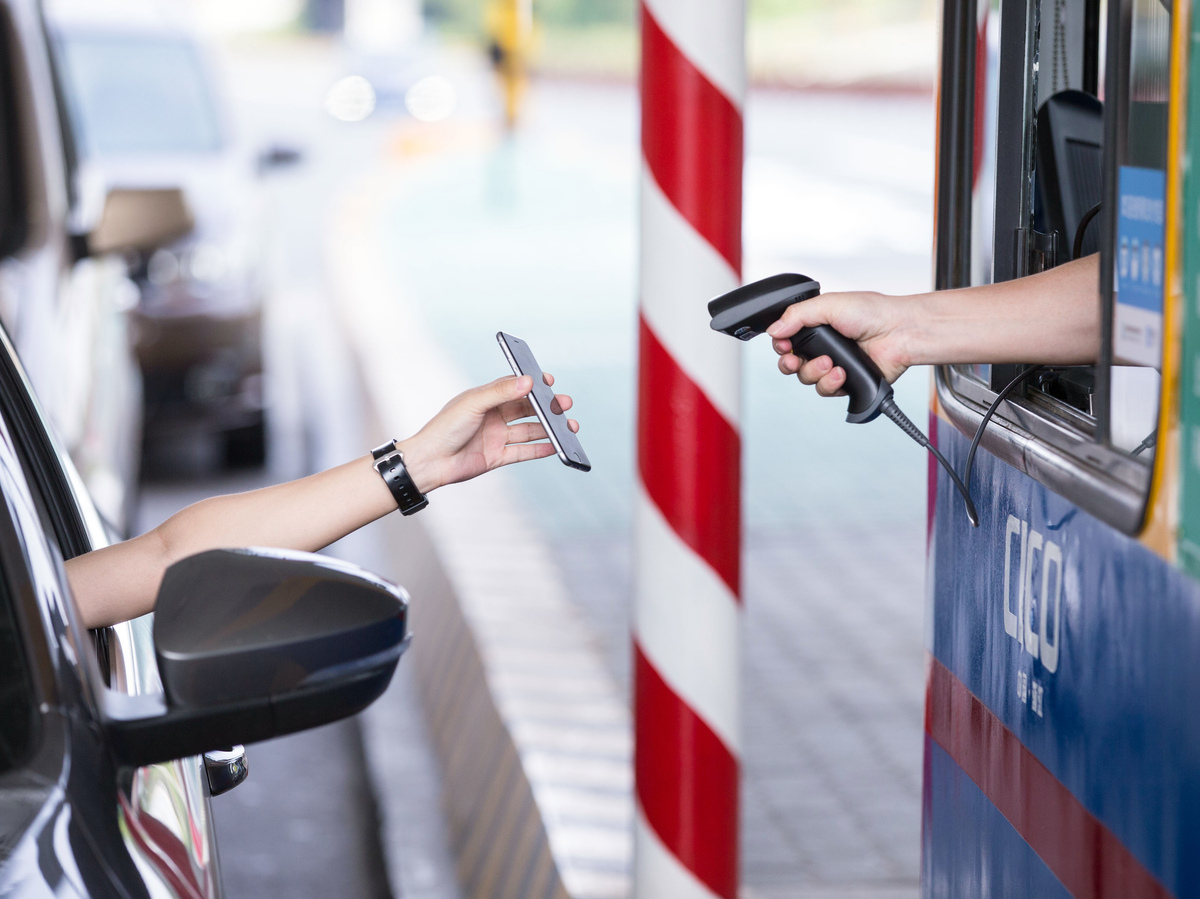 A driver uses his smartphone to pay the highway toll with Alipay, an app of Alibaba's online payment service, in the Chinese city of Hangzhou.

People in China have been paying cash for things for thousands of years, long before other civilizations. Now, increasingly, they're paying with their cellphones.

So while the Trump administration hailed a bilateral deal in May, that would allow U.S. credit card firms including Visa and Mastercard access to the China market, it may not be the coup those firms hoped. Chinese consumers are essentially leapfrogging plastic, and going straight from cash to mobile payments.

Chinese spent $5.5 trillion through mobile payment platforms last year, about 50 times the amount in the U.S., according to reports.

Nowhere is the cashless trend more obvious than in the eastern Chinese city of Hangzhou, which is home to Alibaba, the world's largest online shopping platform.

Long Absent In China, Tipping Makes A Comeback At A Few Trendy Restaurants

Its mobile payment app, Alipay, and WeChat Pay, which belongs to the country's leading social messaging platform, together hold a commanding 90 percent of the market, leaving Apple Pay struggling to make inroads.

I recently spent a day in Hangzhou to see how easy it was to go cashless, and I found it somewhat ahead of other cities, including Beijing. I rode buses and subways, which all accept Alipay. I visited a major Buddhist temple, where visitors can make donations, buffing up their karma with a swipe of their phone.

I even listened to the plaintive tunes of a woman performing music on the street for change — or for a scan of a QR code, placed beside the change box.

Over a plate of noodles, a restaurateur named Ma Zhiguo told me that about half his customers pay for their meals with cellphones, and he uses his to pay most of the time too. 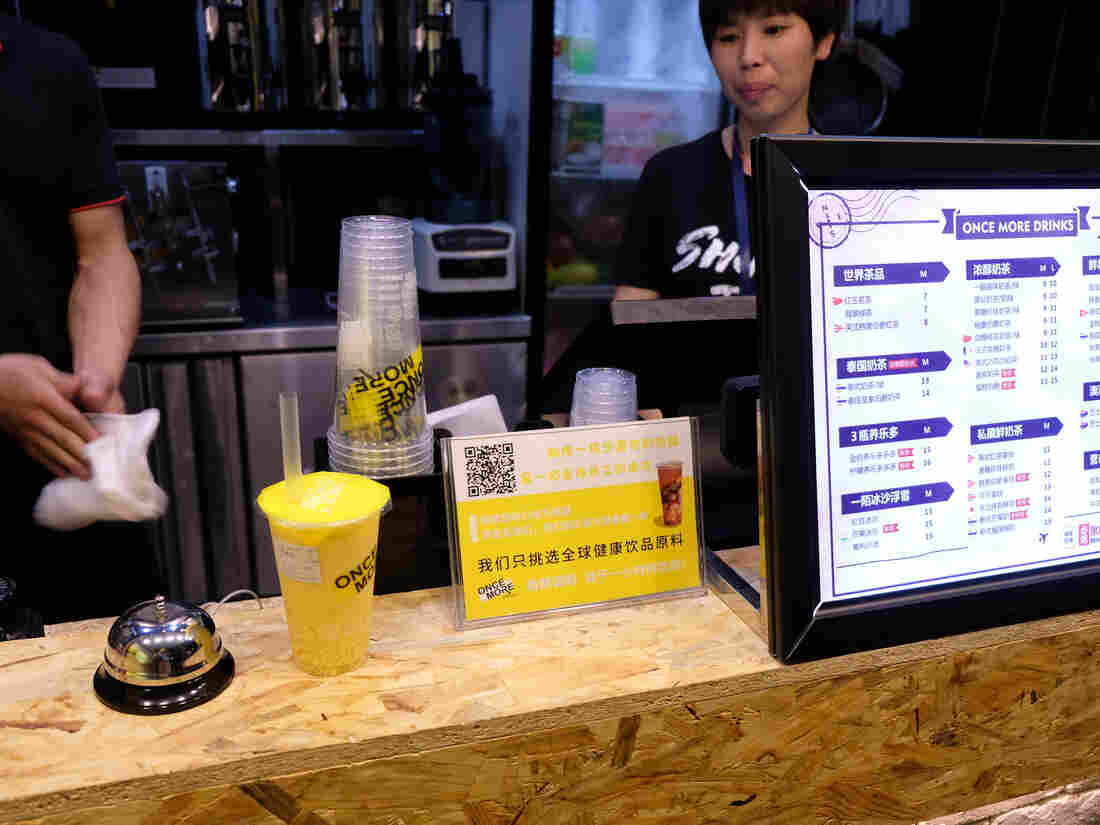 A juice shop in east Hangzhou displays a QR code next to the menu, allowing customers to pay with mobile payment apps on their smartphones. Anthony Kuhn/NPR hide caption 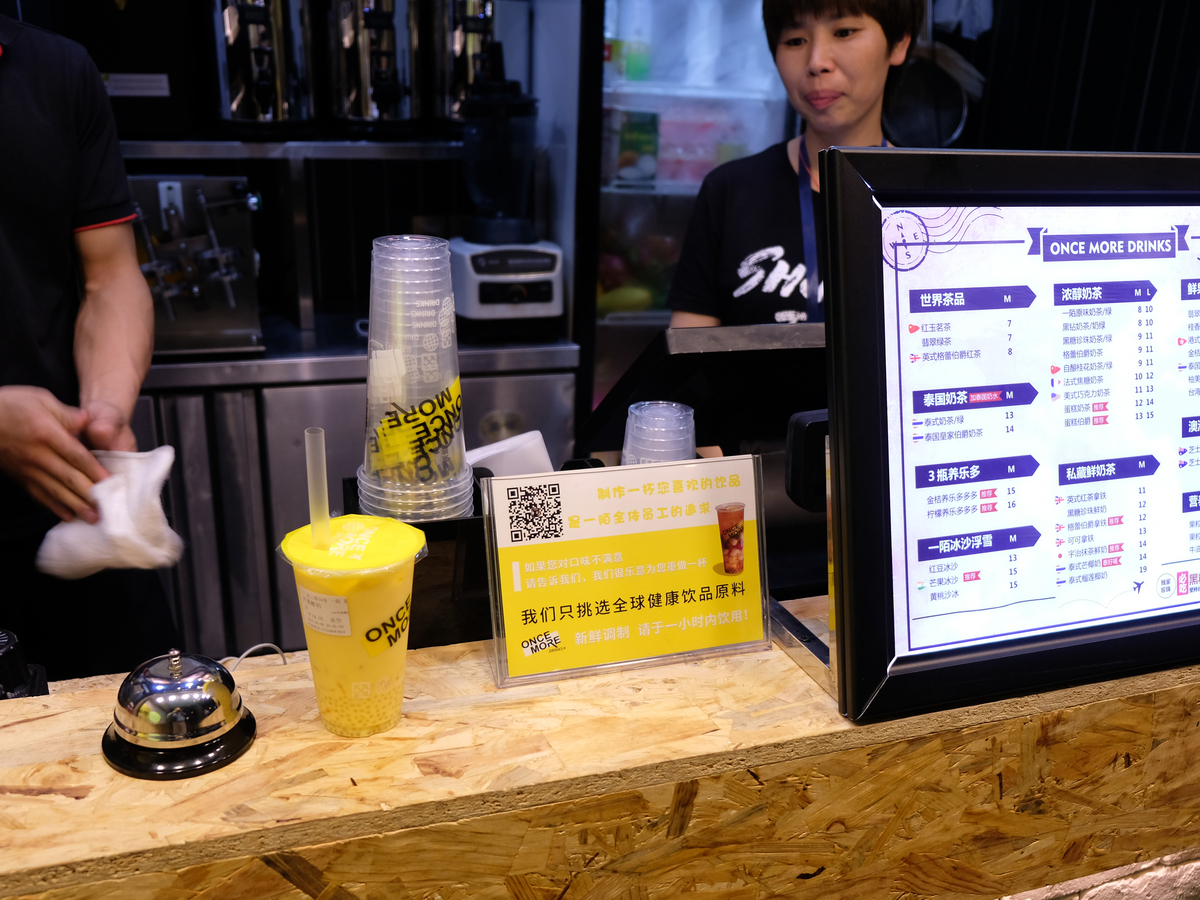 A juice shop in east Hangzhou displays a QR code next to the menu, allowing customers to pay with mobile payment apps on their smartphones.

All this is a rapid and somewhat surprising development in a country where, a couple of decades ago, it wasn't even clear that credit cards were going to catch on.

Chinese Academy of Social Sciences research fellow Cheng Lian argues that this was a cultural problem.

The workaround Chinese mobile payment platforms came up with was to link people's phones to debit cards, so they didn't owe anyone money.

The platforms also came up with a technical fix: by using the cellular networks smartphones use, they bypassed the often-unreliable data networks used by credit card payment terminals.

As a result, after several years of growth, Cheng says, credit card use in China began to decline around 2008.

But Lin Guangyu, who is in charge of payments for urban services at Ant Financial, the financial services arm of Alibaba, says his company addressed a deeper problem: a general lack of trust in Chinese society.

Ant Financial's subsidiaries include Sesame Credit, which rates people's credit based on their online shopping and payment record. It also runs MYbank, an online bank which extends commercial loans to qualified borrowers.

"Ant Financial's vision," Lin says, "is that when Chinese people have credit, they will have wealth."

But Cheng Lian voices doubts about this.

"We think that by analyzing such big data, we can make an accurate assessment of a person's character," he says. "But this has not been proven."

What could go wrong? A lot, says Cheng. People could game the system. Others who don't use online payments could be marginalized, and have less access to services. And government and corporations could gain too much power to invade people's privacy.

For the moment, though, Cheng notes, there's not much debate in Chinese society about these developments, and most people don't seem too concerned.

"Folks at the bottom of society feel that what's important is getting enough to eat and making money," he says. "They don't see matters of privacy as so important."

It's certainly not a debate, Cheng adds, that China's government wants to encourage.