Accessibility links
A Year Later, Pokémon Go Has Leveled Out And Left Fans Wanting More : All Tech Considered The nostalgia-fueled app caught the world's attention — sending people in search of the game's monsters. While millions still play, augmented-reality designers are thinking about the next big thing. 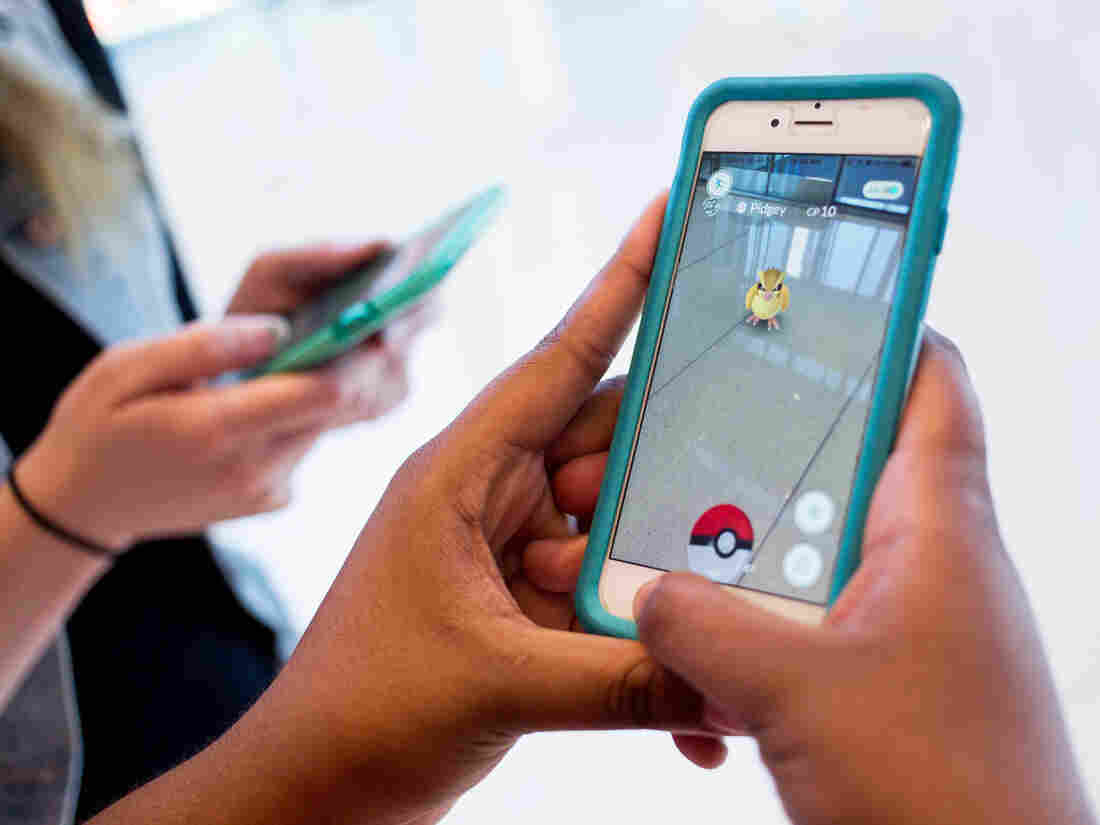 The mobile app Pokémon Go has lost some of its original steam, one year into its tenure on the gaming charts. Ruby Wallau/NPR hide caption 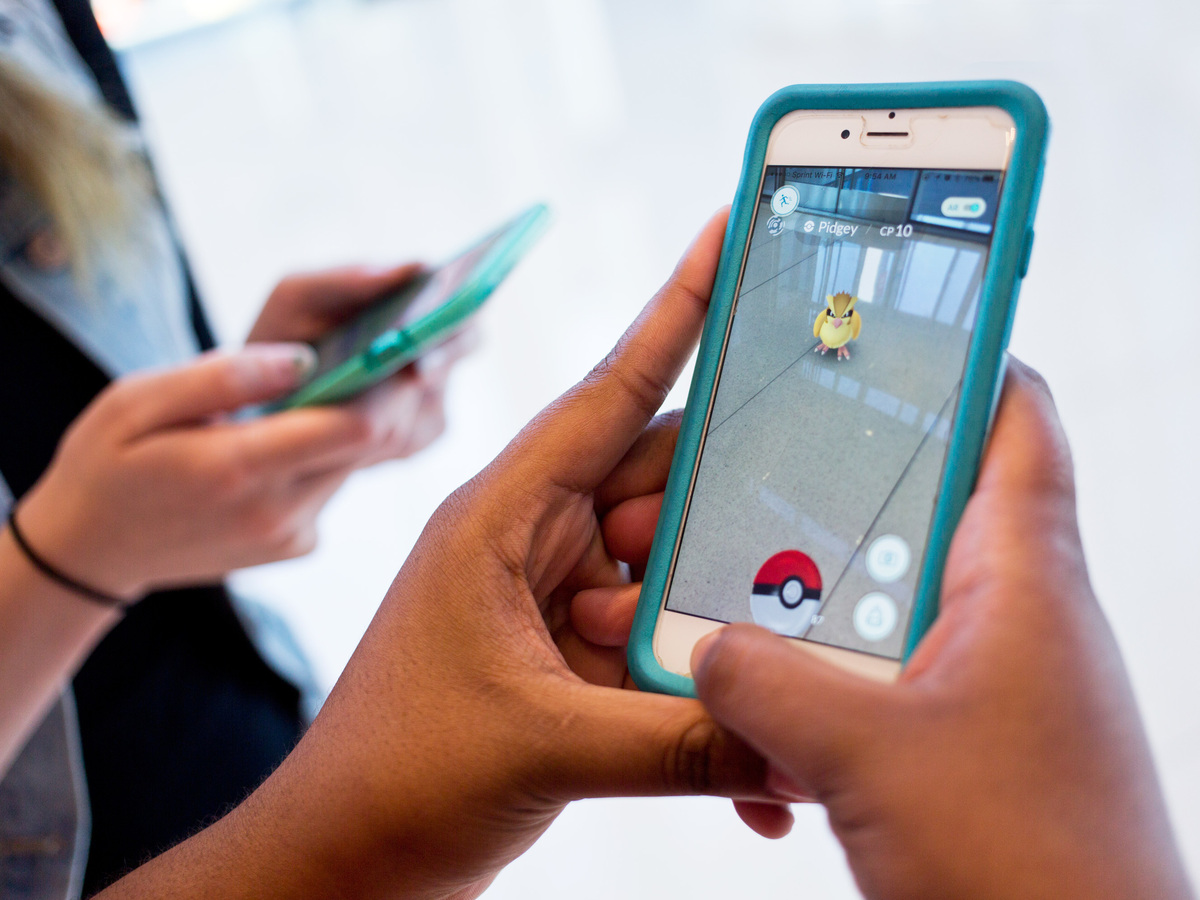 The mobile app Pokémon Go has lost some of its original steam, one year into its tenure on the gaming charts.

Last summer, streets and parks around the world suddenly became crowded as Squirtles, Caterpies and Sandslashes joined smartphone-carrying businesspeople, teenagers and retirees in the great outdoor quest to "catch 'em all."

Launched July 6, 2016, Pokémon Go — the game in which players can use their smartphone to see, battle and catch the monsters in the real world — quickly became the top downloaded free app in the Apple and Android stores.

A year later, the quest is still on for some Pokémon Go players, but the allure has faded for many of the early adopters.

Gotta Catch 'Em All, Or At Least A Few: A Pokémon Neophyte Tries Pokémon Go

It has been downloaded about 752 million times worldwide, according to Apptopia. But in May, only 60 million users were active, meaning they opened the app at least every five days. Downloads and active users both peaked last August.

Dennis Fox gave up on the game when the mechanics of it fell short of his expectations.

"It was like trying to walk out of the house with the lights off and a bad head cold: You are going to stub your toes. That's how it feels to play," he says. "It is more like you are suggesting what the Pokémon will do. Your input is not really having a direct effect on what's happening."

Fox is a fan of Ingress, the debut game from Pokémon Go creator Niantic, and felt the new game didn't do much to expand on Ingress' capabilities.

"I wasn't particularly impressed. I have the benefit of working in this field for my graduate degree 10 years ago, and it is kind of disappointing how little progress has been made," he says.

To date, Pokémon Go has been downloaded 752 million times, according to Apptopia, but downloads have slipped since their August peak. Courtesy of Apptopia hide caption

To date, Pokémon Go has been downloaded 752 million times, according to Apptopia, but downloads have slipped since their August peak.

What bolstered Pokémon Go's early success was the nostalgia factor.

"If it was 'Pocket Monster Go,' it wouldn't have been the same," says Fox, who used to play the Game Boy Pokémon games with his younger brothers. "The Pokémon name hooked a lot of people."

Boon Sheridan, a user experience designer, says the only brand he could imagine with the same sort of built-in fan base would be Harry Potter.

For Sheridan, Pokémon didn't just hit home emotionally — the experience literally landed on his doorstep. He made headlines when his house — a converted, Victorian church — was designated as a "gym" in the game. It took about 72 hours before the designation was removed from his Holyoke, Mass., home.

That was just enough time for dozens of people to arrive around his property, trying to train.

"I was home for the weekend, my wife was away, I was hungover, and I was sipping coffee and watching it all unfold," Sheridan says. "It was a cornucopia of emotions. I was never angry. It had a whole sense of 'wow, this is really happening.' It raised a lot of interesting questions."

Sheridan says a lot of those questions remain unanswered. He says someone from the National Association of Realtors contacted him and asked, "If you were going to buy a home and someone said 30 to 40 strangers will come by a week, maybe 50 on the weekend, will that change your opinion on the house?"

At his great-aunt's funeral at the Massachusetts National Cemetery on Cape Cod, Sheridan checked his phone out of curiosity. The site was home to multiple Pokéstops and gyms, which he found awkward.

"You can't always trust data. Half the problems of Pokémon Go were overlaying locations on a map without context," he says. "They were either private or not appropriate."

Despite the bumps in the road, Sheridan still plays the game. He had to stop during the New England winter but is back to catching Pokémon. He says it is more challenging now, because hard-core players, who are often willing to drop money in the game, have stayed, making gyms more competitive.

Sheridan is grateful for how the game helped him and his wife to explore Holyoke and meet neighbors, as they were new to the area.

Pokémon Go has also set the stage for future augmented and mixed reality experiences, introducing people to a technology that few had firsthand experience with.

"I used to spend the first four minutes of presentations explaining what augmented reality was. Now I can just say, 'You know Pokémon Go,' " says Judy Perry, a researcher and designer with the Massachusetts Institute of Technology Education Arcade. "This put location-based AR on the map."

Perry's 8-year-old son, Noah, is a big fan of the app and the entire Pokémon experience. He has the books, watches the television show and has even incorporated the characters into art projects at school, in addition to playing with the app.

"He has literally taken thousands of extra steps he would not have otherwise," Perry says of his time using Pokémon Go.

Despite the fun her son has playing the game, Perry says there are things missing in the app that may explain the player drop-off. Some designers say it lacks narrative depth and the social components that come with the classic Pokémon card game, such as trading. Even with a round of updates to the gym functionality, which Niantic rolled out in June, trading remains an elusive feature.

"There is some strategy, but it was designed for younger audiences," Perry says. "Adults who came to it, it just didn't speak to them. But, one game is not all things to all people. There is a reason some people like Scrabble and some like Mario Kart and Grand Theft Auto."

The Rise Of (And Backlash Against) Pokémon Go

Despite its pitfalls, the nostalgic appeal of Pokémon Go's colorful characters has kept enough players coming back to make it a fun, community-building experience.

Boston resident Derick Magnusen will be attending the Pokémon Go Fest in Chicago this month.

Magnusen, who has been a Pokémon fan since he was 6, downloaded the app the day it came out but didn't start playing in earnest until he caught a "regional" Pokémon on a business trip to Taiwan.

"It is really nice to have a game that makes you go outside to play it," says Magnusen, who owns his own photography and video production business and logs 15 to 20 hours a week on the game. "I got a dog in February, and it makes me take her on longer walks. It's an enjoyable experience overall."

A Letter To Pokémon Go Players From An Ingress Fan