Accessibility links
From Family Snapshots To NASA Photos, Archivists Aim To Solve Preservation Puzzles : All Tech Considered Levi Bettwieser develops found film rolls from his Idaho home, and Dennis Wingo helped rescue early pictures of the moon. But what will happen when historical photos go from analog to digital? 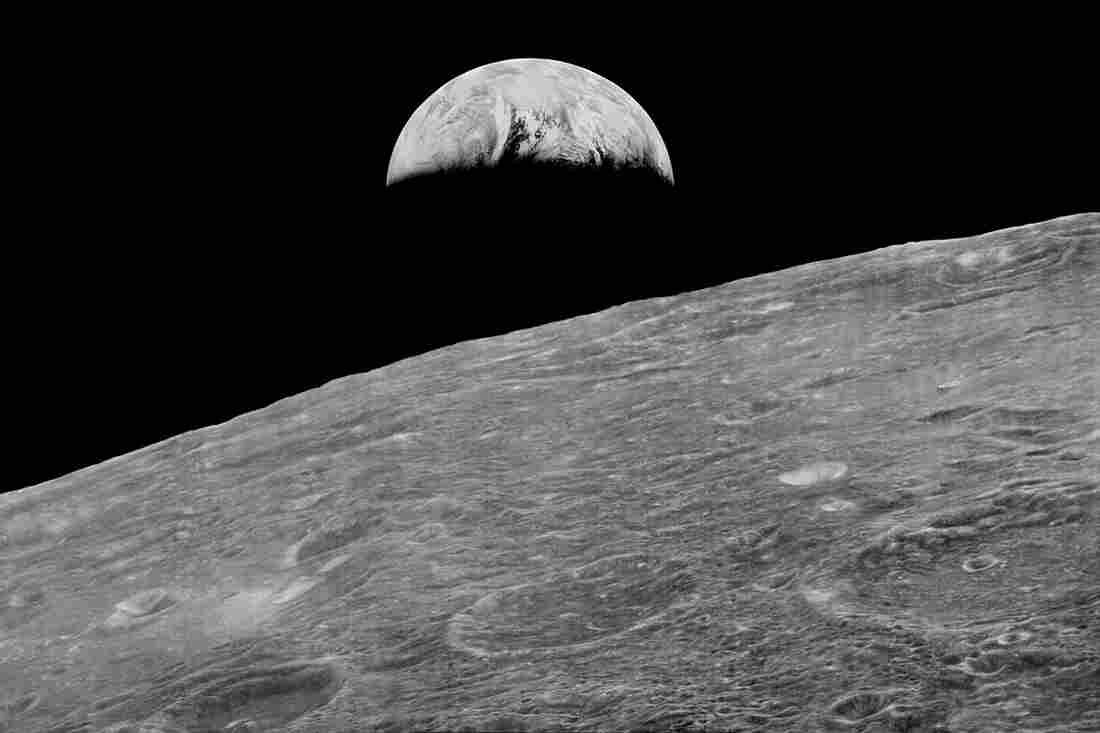 This image of the Earth rising over the moon was the first one recovered by the Lunar Orbiter Image Recovery Project. NASA / LOIRP hide caption 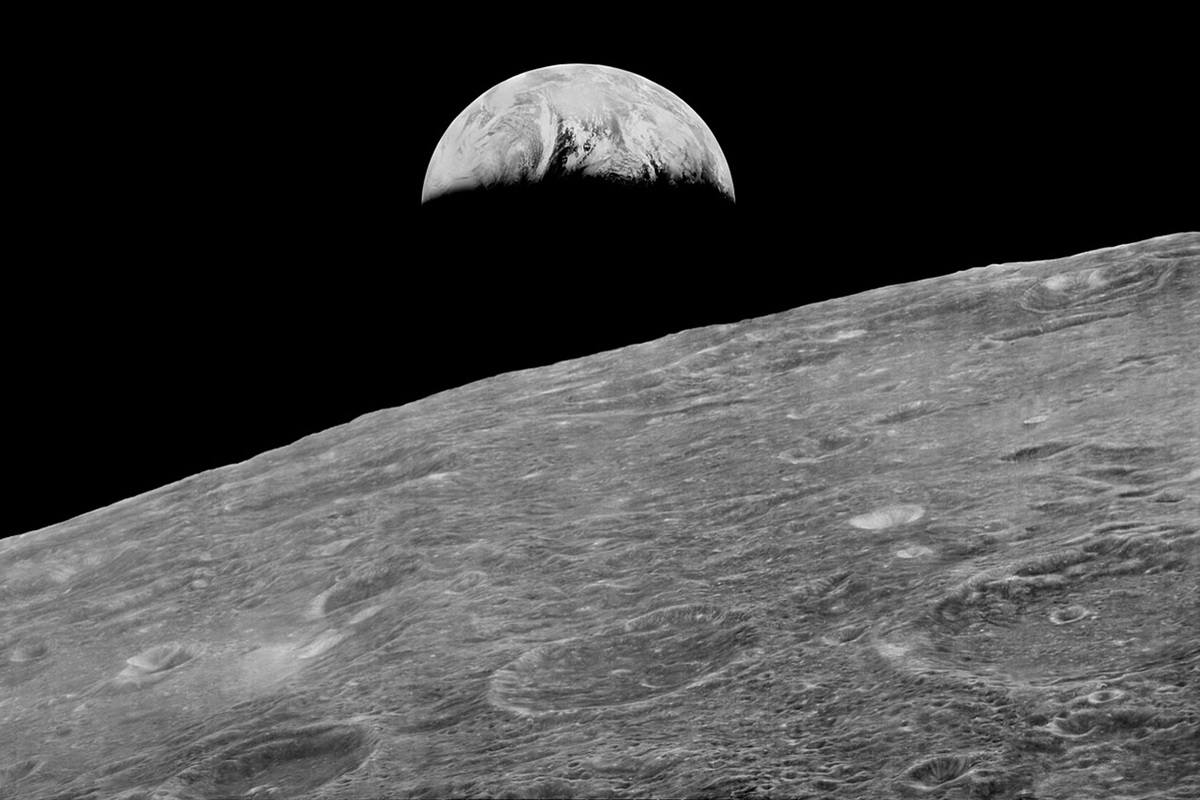 This image of the Earth rising over the moon was the first one recovered by the Lunar Orbiter Image Recovery Project.

When was the last time you had a roll of film developed? For many, our digital devices are datebook, rolodex and camera all in one. But moments captured on film are finding a second life through a project based in Idaho, and it raises some questions about our digital future.

In his Boise basement darkroom, Levi Bettwieser deftly unspools, cuts and winds a roll of film into a canister. He rinses it in several chemicals, waits few minutes, then takes it out and holds it up to the light.

"Looks like there's a helicopter, a bunch of people on a beach, boats — just looks like a day at the beach," he says.

Bettwieser didn't take these pictures, and he doesn't work for a developing lab. His mom was a photographer, and cameras have always been a part of his life. So when he started looking for old cameras in thrift stores around Boise, he was surprised to find that some still had film in them.

"I figured all the cameras had been opened and all the film was destroyed or it was too old," he says. He tried to develop them anyway — and it worked. "All the images from those rolls — they weren't anything significant, really; they were birthday parties and vacations and things like that. But I realized that those were important moments for people. And so I figured, You know what? I need to start finding more rolls of film to process, because there's more memories out there."

Bettwieser scours estate sales and vintage shops for undeveloped film (some from the 1930s) then posts his findings on a website he created called the Rescued Film Project. He says his mission is to reunite film owners with their photos — and it seemed to resonate. 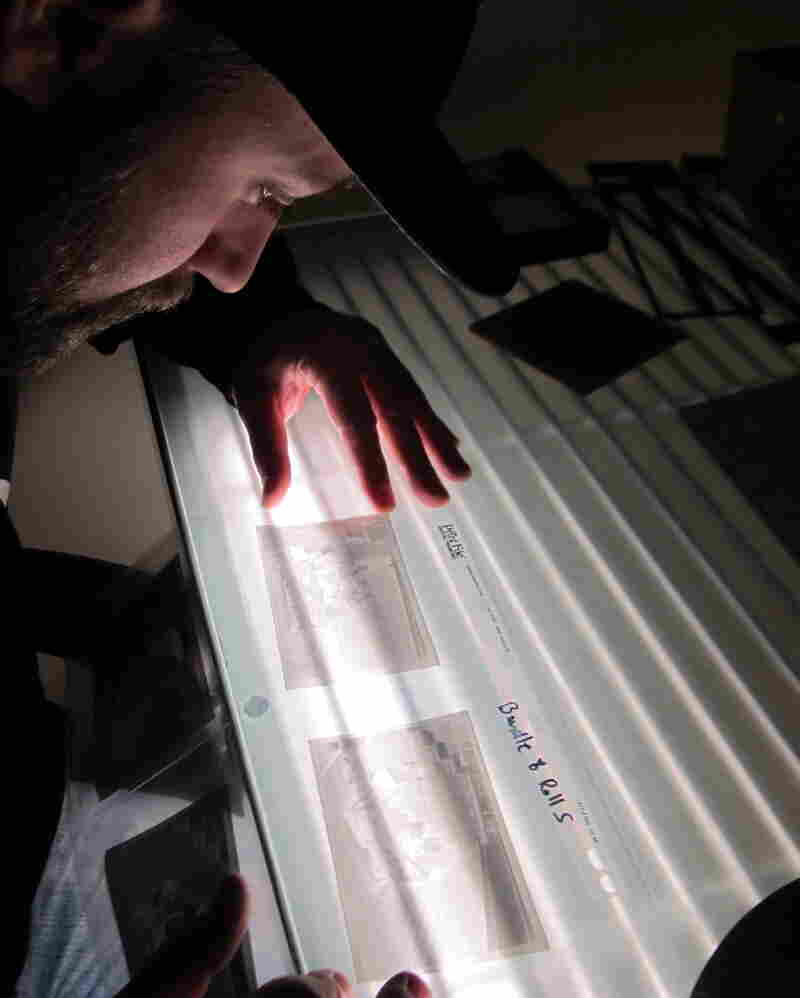 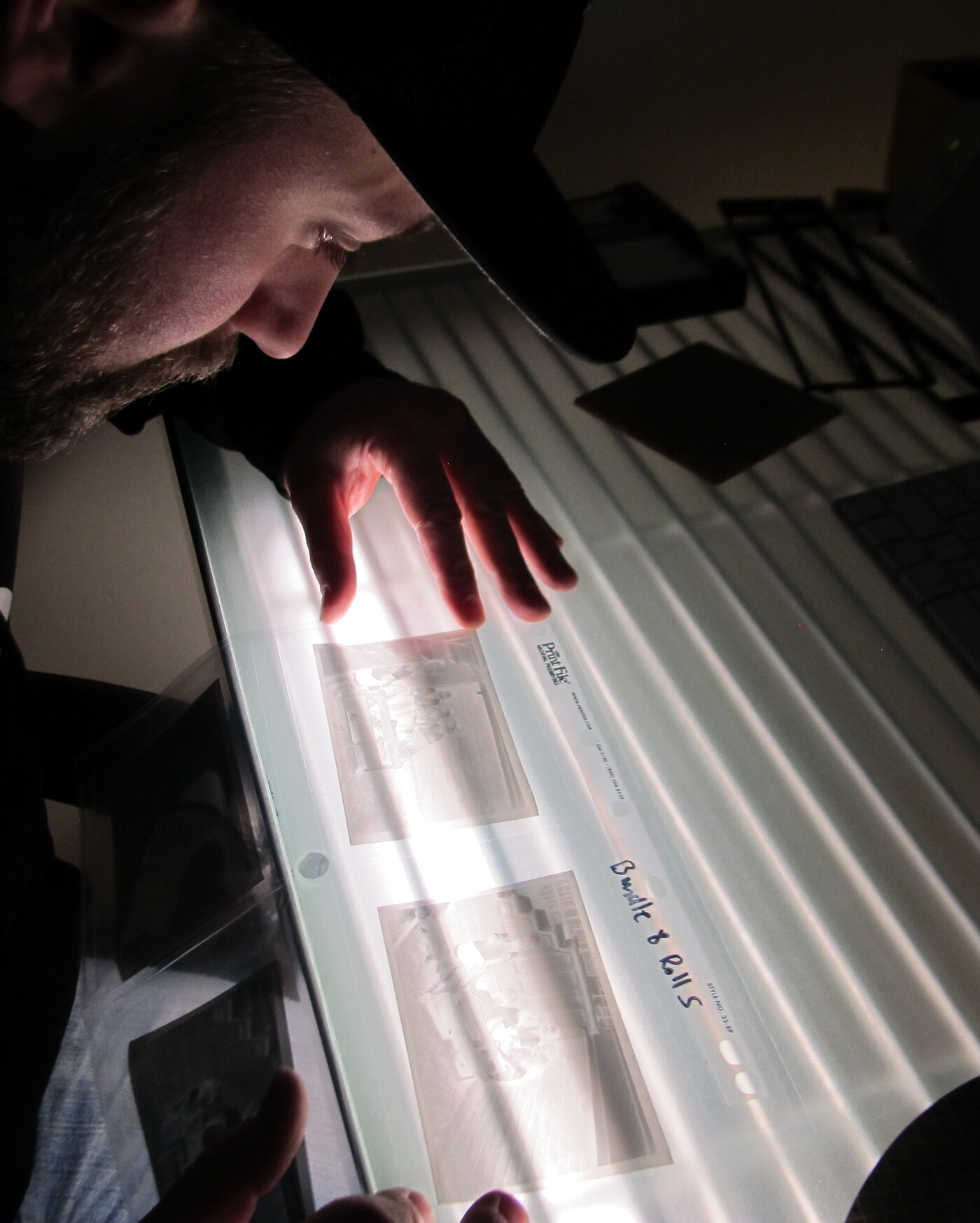 Levi Bettwieser examines some recently developed film at the light table in his basement.

"People started sending me rolls of film," Bettwieser explains. "And I went from finding a roll of film here and there in thrift stores ... to a package showing up on my door every day with rolls of film in it."

He spends his days as a videographer, but nights, early mornings and weekends are dedicated to the Rescued Film Project. "When I pull that film out of the tank for the very first time, I'm the very first person who has ever seen that," he says. "And that is still what drives me to this day and kind of keeps me going."

Somebody may have taken the roll decades ago, and for years the memory remained locked away. Then Bettwieser comes along and not only develops it, but chronicles it in a digital archive. In his own way, he's doing what a lot of us do every day without realizing it.

"Your Facebook, for example, or your Twitter feed — you are creating a daily archive of your life," says Dennis Wingo, an engineering scientist and researcher who's worked with NASA. "It's an archive of your thoughts. It's an archive of the interactions with your friends. That has value, not only to you but to your children, your grandchildren and your family 500 years from now."

About 10 years ago, Wingo undertook his own version of the Rescued Film Project. His was called the Lunar Orbiter Image Recovery Project, and the goal was to resurrect high-resolution pictures of the moon taken by the orbiter in the mid-1960s. To do that, Wingo had to unlock images that had been stored on magnetic tapes — tapes that could only be read by that era's archaic technology.

After a global search, Wingo and his team located what seemed to be the last four machines in existence and extracted the images, which are now part of NASA's archive. But he's keenly aware this isn't the last time someone like him will have to tackle a job like this.

How Long Do CDs Last? It Depends, But Definitely Not Forever

Wingo saved images of the moon that helped the Apollo missions, and the Rescued Film Project is saving photos of bygone Christmases. But Levi Bettwieser thinks both add something to history. "I love the idea of taking what are these simple moments and elevating them and putting them on a platform for people to view so that we can have these shared experiences," he says. "It makes us all realize that we all kind of do the same things and we are similar as human beings."

But when computers are eventually rendered obsolete, will anyone want to save all this data again in a new form? Should hard drives be the next magnetic tapes, keeping the past present could be a challenge.