Accessibility links
Ashes to Ashes, Dust to ... Interactive Biodegradable Funerary Urns? : All Tech Considered Technology is fundamentally changing how we deal with death, memorials and human remains. One of the latest examples: A startup offers a smartphone-connected urn where ashes are used to grow a tree. 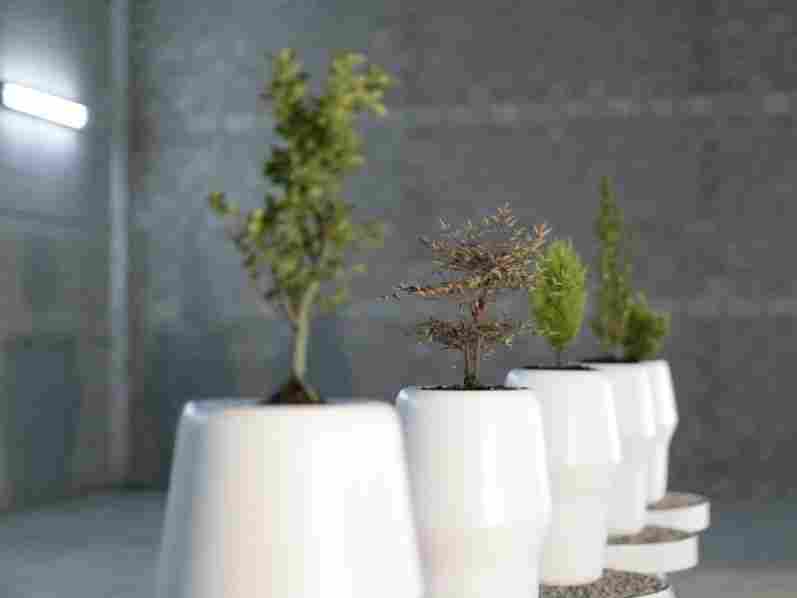 The Bios Urn mixes cremains with soil and seedlings. It automatically waters and cares for the memorial sapling, sending updates to a smartphone app. Bios Urn hide caption 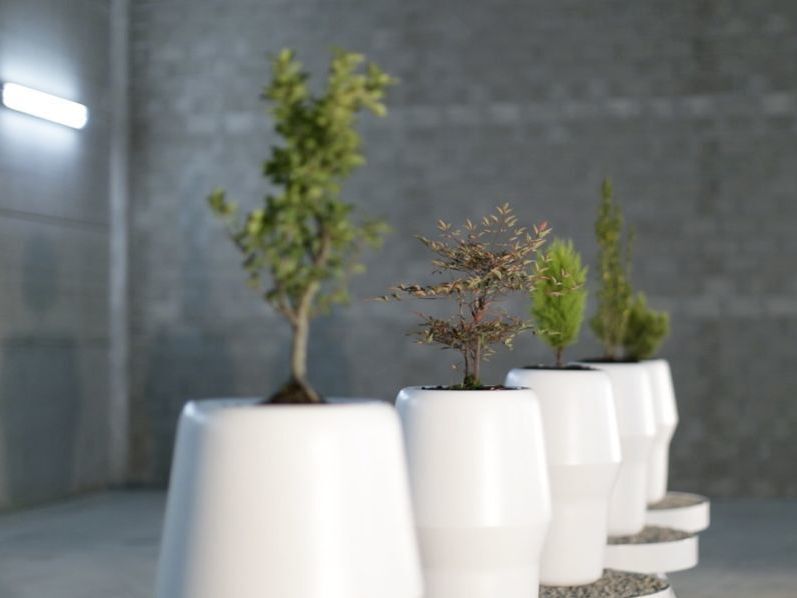 The Bios Urn mixes cremains with soil and seedlings. It automatically waters and cares for the memorial sapling, sending updates to a smartphone app.

Earlier this summer, a modest little startup in Barcelona, Spain, unveiled its newest product — a biodegradable, Internet-connected funeral urn that turns the ashes of departed loved ones into an indoor tree. Just mix the cremains with soil and seedlings, and the digital-age urn will automatically water and care for your memorial sapling, sending constant updates to an app on your smartphone.

At first glance, the concept seems gimmicky — evidently, we're running out of ideas for smart appliances. But the Bios Incube system can also be seen as the latest example of a gradual transformation in modern culture.

Technology is fundamentally changing how we deal with death and its attendant issues of funerals, memorials and human remains. Much of this change is for the good. Some developments are a little spooky. But one thing is for sure: You can do a lot of cool things with ashes these days.

The Bios Incube system, which went on sale in June after a successful crowdfunding campaign, is the latest iteration of a much older idea in which ashes are essentially used as compost for a memorial tree or plant. But the Incube system adds some high-tech twists. The biodegradable urn is placed within a 5-gallon planter with an elegant, off-white, minimalist design vibe — call it the iUrn.

Actually, that's the Incube. Fill it with water and an internal irrigation system kicks in while separate sensors monitor the progress of your plant, taking constant readings on temperature, humidity and soil conditions. This information is wirelessly beamed to the included smartphone app, allowing the bereaved user to better care for and nurture the seedling as it grows into a tree.

Roger Moliné, co-founder of Bios Urn, says the company offers two versions of its system. One provides the basic biodegradable urn and planter at $145. The more expensive version — if you want all the high-tech bells, whistles, atmosphere sensors and smartphone apps — tops out at $695.

"Interestingly enough, we have found so far that most have opted voluntarily for the high-tech option," Moliné says.

He has a theory on that.

"Most of us are connected to the digital world, and we have become used to it," he says. "Perhaps by tying together this process with technology, there can be a sense of comfort that comes from using a familiar process with a new experience. We hope that it will push people in a new direction and perhaps make this process easier for those experiencing loss." 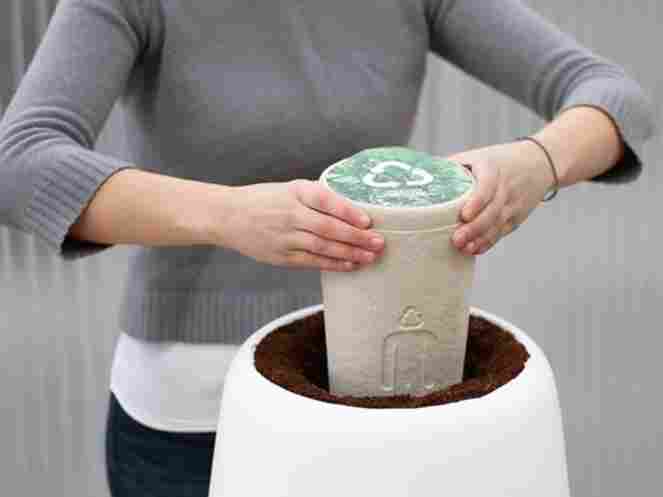 The Bios Urn is part of a high-tech system in which the ashes of a departed loved one are used to help grow a tree. Bios Urn hide caption 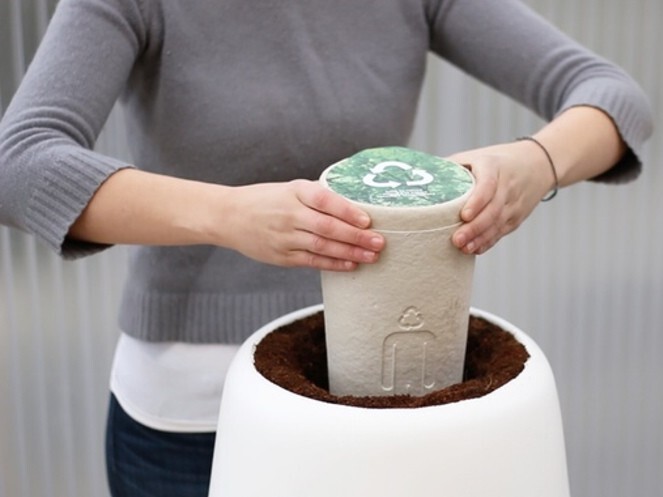 The Bios Urn is part of a high-tech system in which the ashes of a departed loved one are used to help grow a tree.

The Bios Urn concept is indeed part of a larger transformation in which technology is changing how we think about death and dying, says Candi Cann, author of the book Virtual Afterlives: Grieving the Dead in the Twenty-first Century.

"Their approach implies a different sort of afterlife than the religious one — an afterlife that theoretically we can partake in," says Cann, who teaches religion and world culture at Baylor University.

"Recent theories on mourning reveal that having continued bonds with the deceased allow us to navigate everyday life while renegotiating our relationships with loved ones who are no longer present," she says. "So in this way, the Bios Urn might actually foster a healthy type of mourning that allows us to look after the dead in an active, daily way."

Caring for the dead via a smartphone app may seem strange, Cann says, but it makes perfect sense for those of us living in a perpetually connected world: "The generation today has grown up with online spaces and smartphones, so this is their medium."

Cann has done extensive research on modern mourning rituals around the planet, and the various ways that technology is impacting how we deal with death and dying. The Internet has certainly changed the way we do things. Obituaries are posted online, funeral arrangements are sent by email or text, and social media platforms like Facebook now offer a range of memorial pages and legacy contact options.

In general, this is all good healthy progress, Cann says. "Smartphones and social media spaces have forced a decline in the importance of a controlled obituary narrative, as more people can contribute to the communal memory of a person and the meaning of their life," she says.

A recurring theme in Cann's work concerns an odd and abiding reticence in mainstream Western attitudes toward death: In short, we just don't like to talk about it. Our aversion leads to a lot of unhealthy sublimation in the culture. "I would argue that the reason we see so much death in the media and in video games is precisely because we are not having real conversations about death," Cann says.

Technology is helping in that arena, too. Cann points to online communities like Death Cafe, which use Internet forums to arrange local meetups for people wanting to talk about death.

Then there is the issue of what to do with the remains. We humans have been navigating this dilemma since the dawn of civilization, but recent technological advances have opened up some options. You can have ashes incorporated into jewelry, blended into oil paintings, mixed into tattoo ink, submerged into coral reefs or even pressed into vinyl records. And don't forget about the festive fireworks option. 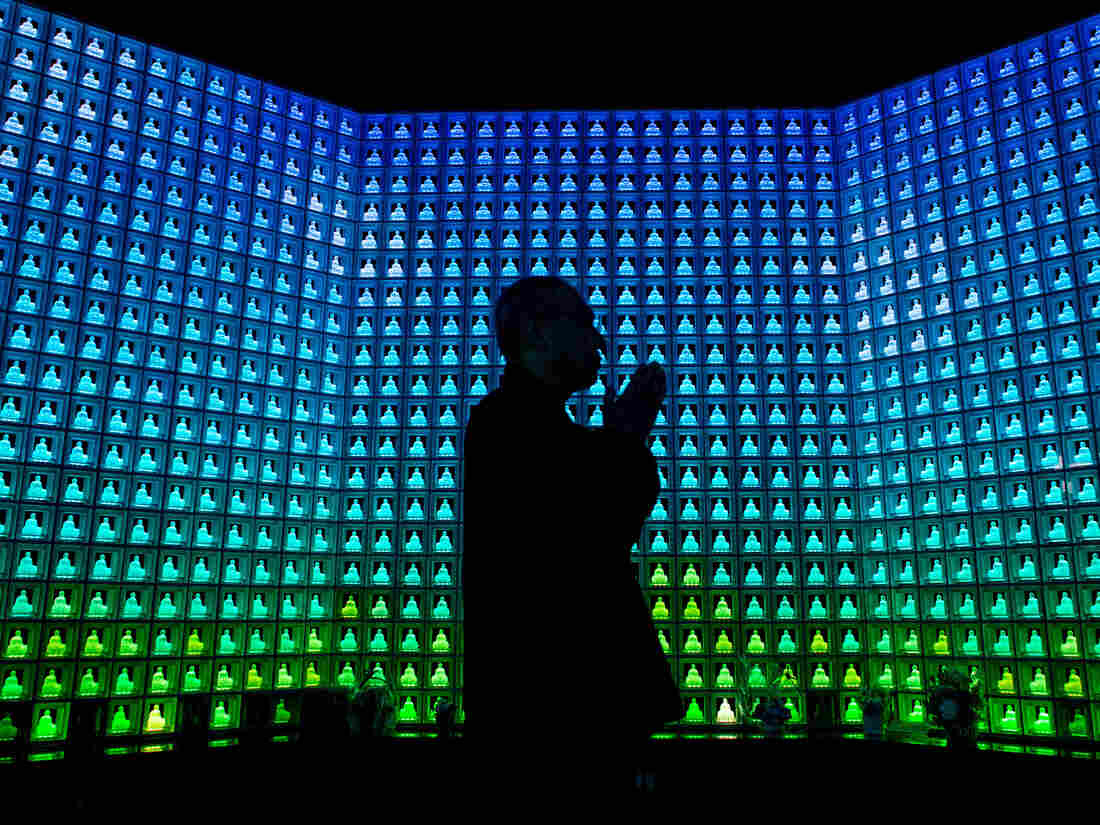 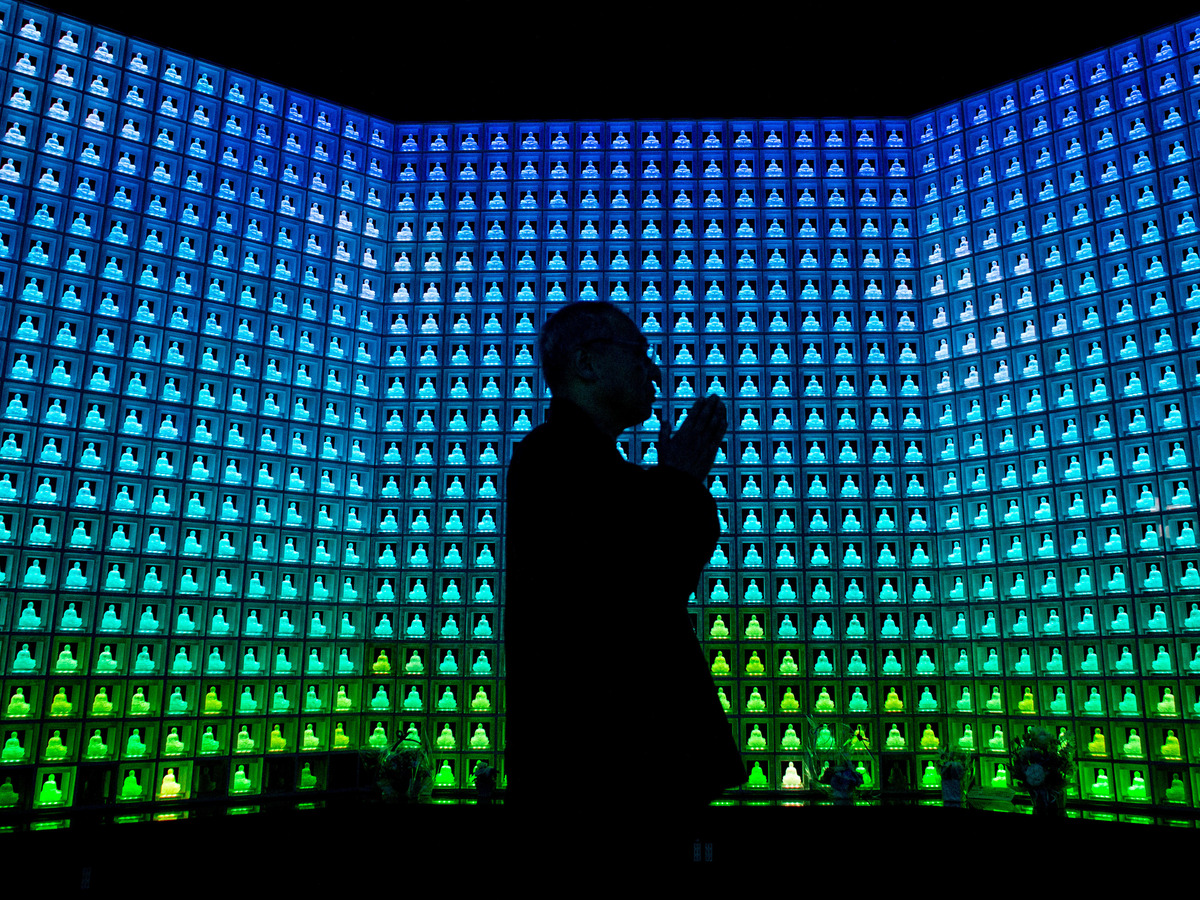 The Ruriden columbarium houses futuristic alters with glass Buddha statues that correspond to drawers storing the ashes of the deceased.

"I've seen some interesting things in China and Japan," he says. "Both have run of out burial space in larger cities and have created interesting ways of commemorating those who have passed."

Cann says that these new modern rituals, facilitated by various technologies, can help us get a little friendlier with death.

"In Brazil, I went to a public crematorium that cremates a body every 15 minutes, and is an actively used public park and picnic space," he says. "Families were playing and picnicking among the ashes. If we see deathscapes as friendly places, rather than where the dead are banished, we might be able to utilize them in healthier and more creative ways."

Looking to the future, however, Cann addresses more worrisome technologies.

"One of the areas I'm thinking more about is the use of artificial intelligence and digital avatars," Cann said. "These are people intending to upload themselves, via AI, into digital avatars."

Proponents of this idea contend that uploading the mind into a computer is entirely plausible. But science fiction has some cautionary tales in this area — any technology that promises to defy death is usually nothing but trouble. Ask Dr. Frankenstein. Even speculating on this sci-fi scenario can get a bit dodgy, Cann says.

"Whenever people focus more on extending life rather than examining its quality, death loses its importance," Cann says. "If we are spending more time trying to deny death or prolong dying, then I think we are not living well."

In this light, the Bios Urn seems like a fairly gentle step forward. Technology can't yet provide us with digital immortality, but it can help us grow a memorial tree in our living room. What's not to like?

From Facebook To A Virtual You: Planning Your Digital Afterlife