Accessibility links
Post-Charlottesville Online Vigilantism Gets Wrong Man Harassed : All Tech Considered A University of Arkansas professor falsely identified as a participant in a white supremacist rally in Charlottesville says the online reaction was frightening and felt like being chased by a mob. 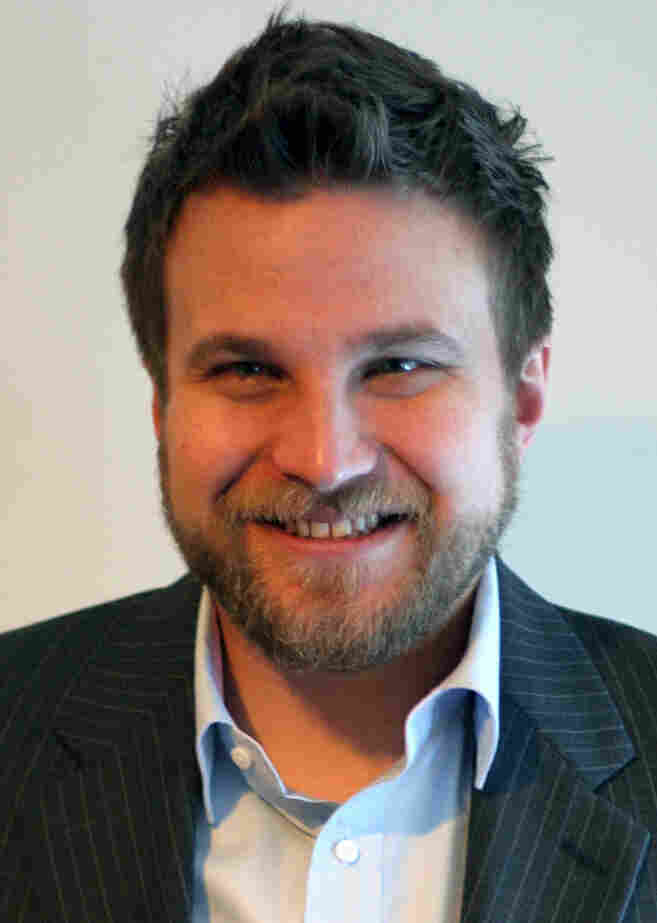 Kyle Quinn, an assistant professor of biomedical engineering at the University of Arkansas, was wrongly identified on social media as a participant in a white supremacist march in Charlottesville, Va. Jennifer Mortensen hide caption

In the aftermath of the white supremacist rallies in Charlottesville, Va., many civil rights activists took to Twitter and shared photos of people who allegedly were at the march. The idea was to identify who they were and shame them. But identifying someone from a photo can be tricky — and the activists managed to make at least one mistake.

It was Saturday and Kyle Quinn and his wife were having a quiet afternoon at home: "I was sitting on the on the couch with my wife; I think we were watching Planet Earth II" — a nature documentary show — "and I got a phone call."

It was from the university relations office at the University of Arkansas, where Quinn works as a professor of biomedical engineering.

"They wanted to confirm where I was," he says. And then it got stranger. "They asked whether I'd heard about what was going on in Charlottesville. I told them I was vaguely familiar."

The school official told Quinn his weekend was "about to get a lot worse."

A counterprotester at the white supremacist march had posted a picture of a man with a beard and light brown hair, the same color as Quinn's, the school official said. The man was wearing a T-shirt that said "Arkansas Engineering." The official said someone on social media put Quinn's name to the picture.

"I thought, you know ... 'This is completely ridiculous,' " Quinn says. "I didn't really understand exactly what was going to happen in the days to come."

His Twitter account and email were inundated with people cursing at him, threatening him and his wife. The university was getting phone calls and emails encouraging it to fire Quinn.

"It got to the point then, on Saturday night, where they had tweeted our home address," he says. "At that time we definitely got the police involved."

Quinn and his wife hid out at a friend's house. They were frightened — it was like being chased by a mob.

"And they're emboldened, because they're online and there's no or little consequences for their actions," he says. "That was definitely the most disturbing part — not knowing what poor decisions this group of people on the Internet could make next."

We have verified that the man in the photo is not assistant professor Quinn.

It's not the first time this sort of thing has happened. In one incident, users on Reddit and other sites combed through photos and other leads after the 2013 Boston Marathon bombing. One result was a New York Post cover that falsely suggested two men in a photo were suspects. There also were false accusations against a missing Brown University student.

Most people are not experts at identification. That's why Storyful exists. The company uses a mix of old sleuthing tools and technology to verify photos and videos posted on social media.

After Son Is ID'd At Supremacist Rally, His Father Responds Publicly

Some Are Troubled By Online Shaming Of Charlottesville Rally Participants

Benjamin Decker, a research coordinator at Storyful, says someone with training would have noticed some details that raised questions as to whether the man in the picture was really Quinn. For instance, the man in the photo at the rally was wearing glasses.

"Kyle Quinn does not wear glasses in his academic photo on the University of Arkansas website," Decker says. "Why would he be wearing glasses to a torchlit rally that could get ugly?"

Decker says Storyful has a lot of tricks in its bag to verify images, including looking at social media accounts. Quinn's likely would have had clues about his whereabouts.

"The standard rule of thumb is that, if you can raise enough doubt about something without even using any of the tech tools, odds are there's a decent chance that you're right," Decker says.

Storyful also uses a lot of technical tools — for instance, metadata in photos that can help locate where and when a photo was taken and if it was altered. But it takes time and skill to do a real verification.

Thank you for all those who are supporting me through this case of mistaken identity.

Meanwhile, Quinn still is getting nasty emails and messages on Twitter, though as the word has gotten out that he wasn't at the rally they have slowed down.

"I understand the anger and frustration that's out there about what happened in Charlottesville," he says. "It was awful and I understand that people want to be able to do something about it. I don't know what the right way is, but I can tell you being on the receiving end, this is not the way to go about it."

Quinn thinks that in this case, maybe it would be better to leave photo identification to the experts.