Accessibility links
Cities Try Convincing Amazon They're Ready For Its New Headquarters : All Tech Considered Atlanta, Denver and other cities are making their cases for the online giant to locate its second headquarters in their area. At stake: up to 50,000 well-paying jobs and billions in investments. 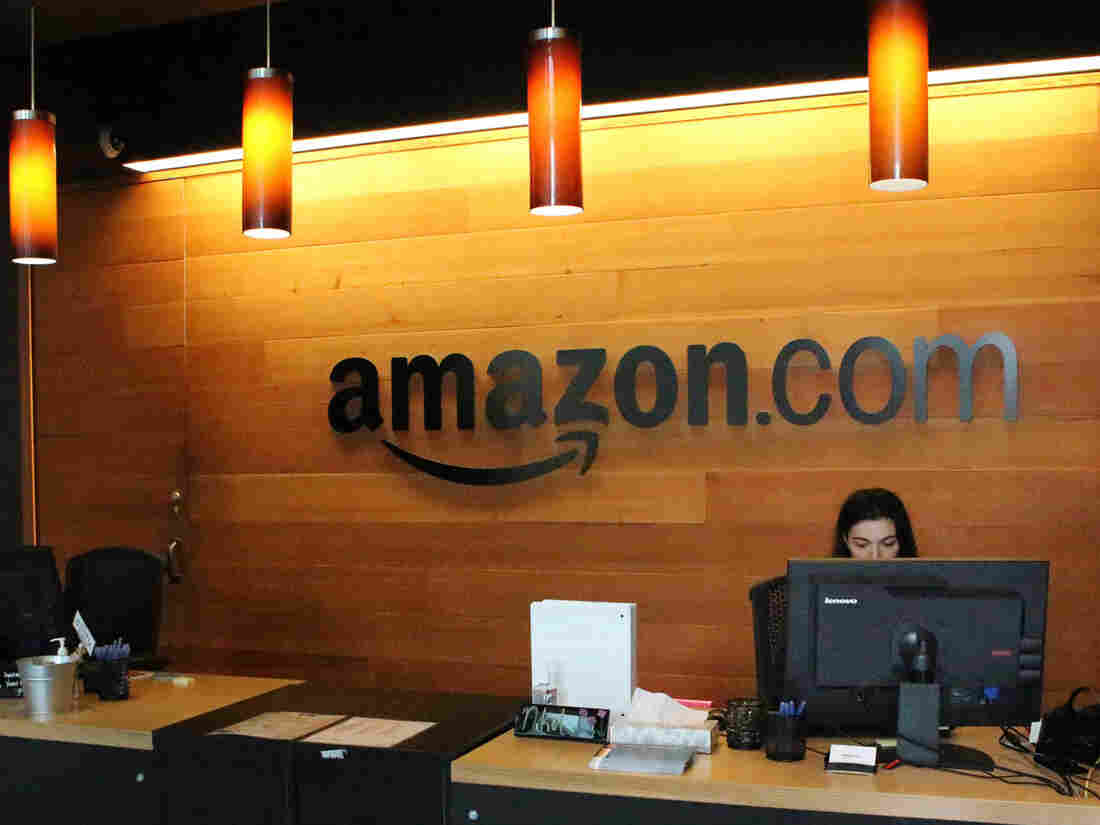 Nikol Szymul staffs a reception desk at Amazon offices in downtown Seattle. Online retail powerhouse Amazon is searching for a second headquarters location, which an official from Toronto has called "the Olympics of the corporate world." Glenn Chapman/Getty Images hide caption 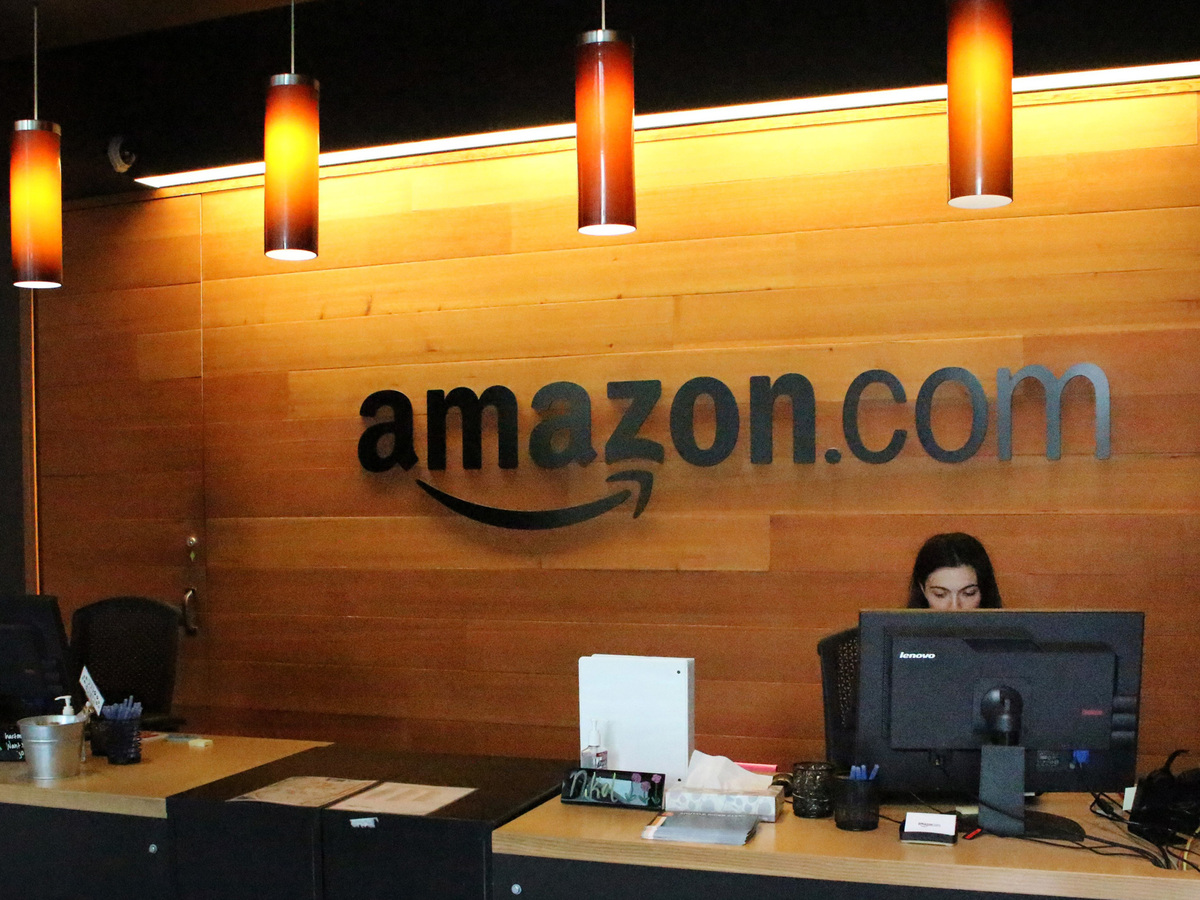 Nikol Szymul staffs a reception desk at Amazon offices in downtown Seattle. Online retail powerhouse Amazon is searching for a second headquarters location, which an official from Toronto has called "the Olympics of the corporate world."

An official from Toronto has called Amazon's search for the second headquarters "the Olympics of the corporate world."

It's a unique situation of its kind and scale. Typically, cities and states vie for factories or offices behind the scenes. This time, Amazon's public solicitation of bids from essentially all major metropolitan areas in North America has prompted reporters and analysts across the continent to run their own odds on potential winners.

The top-line pitch is Amazon's promise to invest $5 billion in whatever community it picks to be the home of its second headquarters. And the company says it would bring up to 50,000 new jobs, with an average salary of more than $100,000.

In Seattle, Amazon's towering 8.1 million-square-foot downtown campus employs tens of thousands of employees and has served as a testing ground for new retail ideas, like a store without checkout registers. Amazon says HQ2 would be a "full equal."

What is Amazon looking for?

The company's call for applications is extremely detailed. It should be a metro area with more than 1 million people, a business-friendly tax structure, close to an international airport and near major highways, a place with mass transit, good Internet and "excellent" higher education.

Amazon Set To Build A Second HQ And Cities Say 'Pick Me!'

The company is also not shy about saying it wants an attractive offer of a financial incentive — a move that has become customary for corporate expansions, which often involve tax cuts, relocation grants or fee reductions. "The initial cost and ongoing cost of doing business are critical decision drivers," Amazon says in the request for proposal.

Which communities are vying for the HQ2?

With almost four weeks until the deadline, the list of potential contenders is expansive: Austin, Texas; New York, Boston, Chicago, Washington/Baltimore, Atlanta, Denver, Ottawa and Toronto — cities up and down and across the continent, tallied to number more than 100 by the Chicago Tribune.

And the communities aren't shy about their public pitches.

"We have sites that are ready, that are transit-oriented," says Scott Levitan, head of the Research Triangle Foundation in North Carolina. "We have tremendous fiber backbone at our site and we have a region that is absolutely focused on being the best possible location for HQ2," he says, adding that the Raleigh-Durham-Chapel Hill metro area sits equally between the ocean and the mountains.

"Colorado is perfectly aligned with the company's culture of collaboration and innovation and focusing on its customers," says Yuriy Gorlov, vice president of the Aurora Economic Development Council, also highlighting the Denver area's access to fiber, power, transit and a nationally recognized hiking trail system.

"We feel like we have a lot to offer, in terms of our talent base, our logistics, our business-friendly climate," says A.J. Robinson, president of Central Atlanta Progress. "And most of all, people love to live and work here."

(Note: Amazon is one of NPR's financial supporters.)

What are the cities' biggest considerations or potential concerns?

Though Amazon likes to tout the billions of dollars it says it has injected into Seattle's economy, the city has been tested by the massive corporate presence.

"Some local lawmakers have blamed Amazon for being a primary contributor to the region's lack of affordable housing and other woes. The City Council recently unanimously approved a tax on individual income over $250,000 and $500,000 for couples, which would affect high-earners at Amazon. The legislation is facing legal challenges.

"The local antipathy toward the company was summed up in graffiti that recently appeared on the wall of a busy downtown traffic tunnel: an expletive before the last name of Mr. Bezos."

The communities seeking HQ2 aren't likely to be naive about what happens when a city gets flooded with thousands of high-net-worth office workers. But in the heat of a bidding war, none of the economic development officials interviewed by NPR said that anyone on their team has suggested avoiding the bid because of potential negatives.

Of course, bidding for Amazon isn't like bidding for the Olympics — the games come and go; the corporate headquarters stays — but Atlanta's Robinson said his city definitely learned a useful lesson from hosting the 1996 Games.

Amazon By The Numbers

Stock price growth in past five years: up 281 percent

U.S. facilities: 214 across the country

"Having survived the Olympics, we know that post-winning, you have to deliver," Robinson says. "You have to have the infrastructure; you have to be willing to invest in transit, in types of things that this number of workers will need, the housing stock and so forth."

Major pushback has so far focused on the potential cost to taxpayers, as all bidding communities weigh how they can entice Amazon with tax credits, free land or other financial perks.

After The New York Times analysis zeroed in on Denver as the best candidate for Amazon's HQ2, The Denver Post published an editorial titled, "In Denver's courting of Amazon, officials should remember the taxpayers." The Post's editorial board wrote:

"We'd love to see Amazon locate here, as long as we're not left feeling like we've given away the store."