Accessibility links
GoFly Prize: A $2 Million Competition Aims To Develop A Personal Flying Device : All Tech Considered A group of aviation companies and advocacy groups, backed by Boeing, have announced a competition to develop a safe and easy-to-use personal flying vehicle in the next two years.

Wish You Could Soar? A $2 Million Contest Aims For Personal Flying Device

Wish You Could Soar? A $2 Million Contest Aims For Personal Flying Device 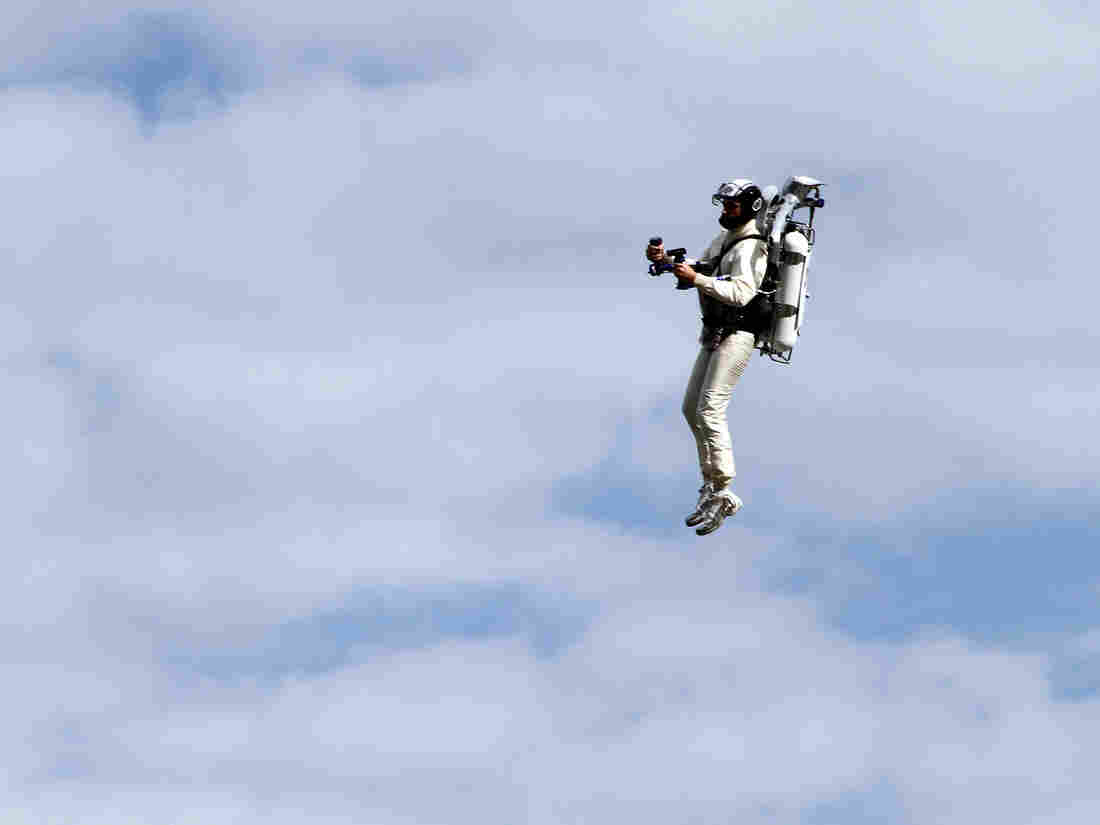 JetPack Man flies through the air at the NASCAR Sprint Cup Series AAA Texas 500 at Texas Motor Speedway on Nov. 6, 2011, in Fort Worth. Backers of a new $2 million competition hope to encourage the development of personal flying vehicles. Jerry Markland/Getty Images for NASCAR hide caption 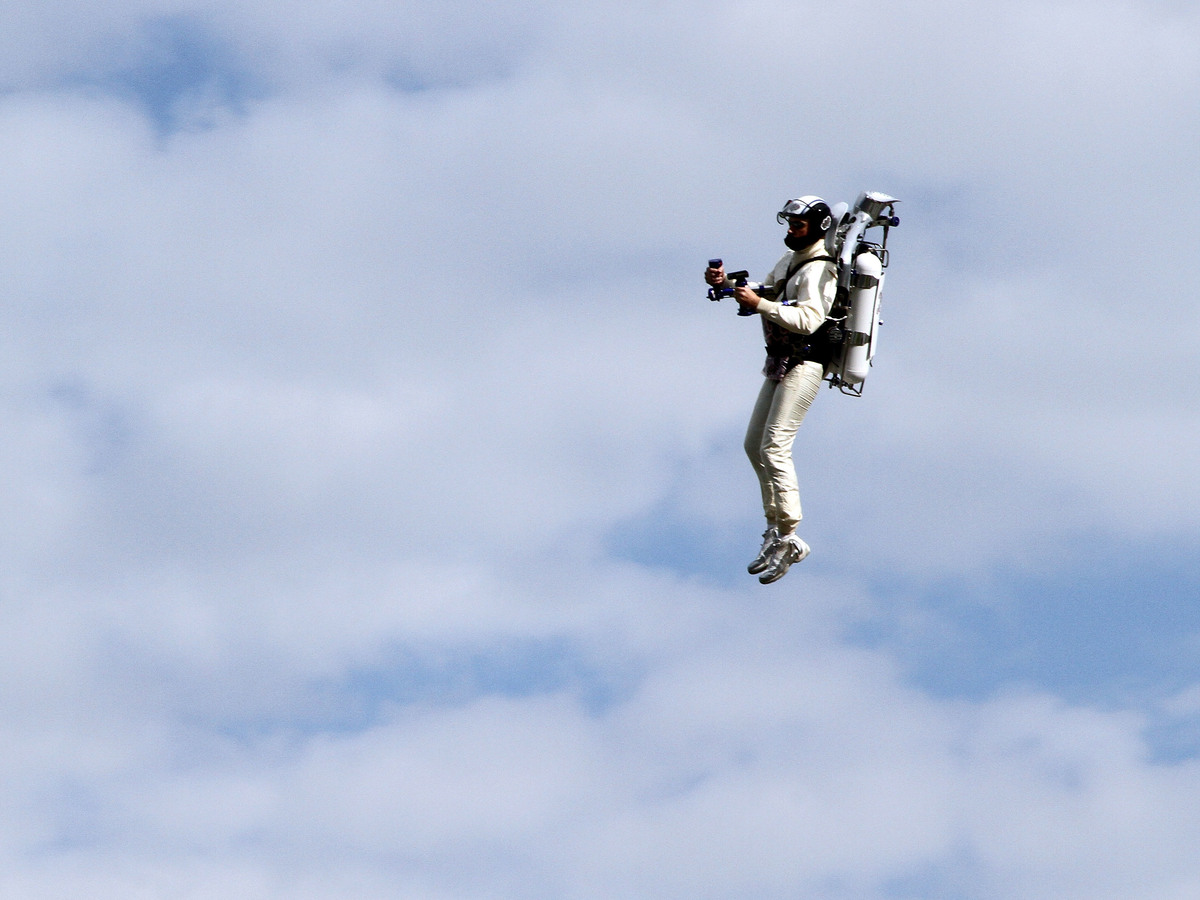 JetPack Man flies through the air at the NASCAR Sprint Cup Series AAA Texas 500 at Texas Motor Speedway on Nov. 6, 2011, in Fort Worth. Backers of a new $2 million competition hope to encourage the development of personal flying vehicles.

Since the first caveman spotted the first bird, our species has dreamed of flight. We've managed it, too. Although for most purposes, it requires several thousand pounds of aluminum and some high-octane aviation fuel.

That may change soon, though: A group of aviation companies and advocacy groups, backed by aerospace behemoth Boeing, have announced a $2 million competition to develop a safe and easy-to-use personal flying vehicle in the next two years.

Jetpacks. They're talking about jetpacks. Well, technically speaking, the solution doesn't have to be a jetpack in the pulp sci-fi sense, but that's the go-to image when you start talking about "personal flying vehicles."

According to the GoFly Prize competition rules, the flying device just needs to be safe, compact, relatively quiet, and able to provide vertical (or "near vertical") takeoff and landing capability in urban environments.

The ultimate goal is to design a flying device that can carry a typical-sized person 20 miles without refueling or recharging.

"What the device looks like and how it works is up to the innovators," says Gwen Lighter, CEO of The GoFly Prize, speaking from the SAE 2017 AeroTech Congress & Exhibition in Fort Worth, Texas, where the competition was formally announced Tuesday. "We do not mandate that it's something you get into like a car, or something that you strap on your back, or something that you stand on. We don't want to say that there is any right way of doing it, since that only limits the possibilities."

Boeing is the main sponsor of the competition, but the project is actually being backed by a long list of companies and organizations that have a vested interest in the future of flight — including the Aircraft Owners and Pilots Association and the American Institute of Aeronautics and Astronautics.

The GoFly Prize is similar to other incentive competitions, like the Xprize, which aim to accelerate innovation by dangling that enduring motivational tool — cold, hard cash.

Prizes will be awarded in three phases, with Phase I featuring up to 10 prizes of $20,000 each based on written technical specifications. Phase II will include up four $50,000 prizes awarded to teams with the best actual, flying prototypes. Phase III will crown the $1 million grand prize winner at the Final Fly-Off in the fall of 2019. Bonus prizes of $250,000 will be awarded to the teams that come up with the smallest device, and the quietest device.

Out Of The Comics, Into Reality: Jetpack Moves Closer To Market

The competition is open to anyone, but as with the various Xprize events, you can expect the field to be packed with startups, spin-off groups from established aviation concerns, and university engineering teams. If you're already thinking of messing around in the garage this weekend, technical guidelines of the competition can be downloaded at the official registration page.

Lighter says that if the GoFly Prize has an overarching ethic, it's that there are no rules — at this stage, at least.

"As a catalyst to establish new technologies, GoFly believes that it's better to allow teams from around the world to decide how best to build a safe, quiet and compact personal flying device," she says. "There are so many converging technologies right now — in materials, batteries, autonomous vehicles. Innovators and inventors from around the world have all these tools."

With the announcement of the new competition, GoFly is in hype mode just now, naturally. So there's no discussion in the online materials of conspicuous practical issues that will surely pop up, like aviation regulations, safety concerns, and the daunting proposition of adding several thousand newbie jetpackers to the air traffic control system. Recent proposals in the flying car arena are already bumping up against such issues.

But such worries are for tomorrow. Today we have a $2 million jetpack competition to contemplate.

"It's such an incredibly exciting time," Lighter says. "It truly is a new golden age for aviation."