Accessibility links
Study Backs Getting Driverless Cars On The Road, As Waymo Ditches Backup Drivers : All Tech Considered A research report says more lives will be saved by putting autonomous cars on the road sooner rather than later, even if they're not perfect. Waymo deployed some in Arizona — without backup drivers. 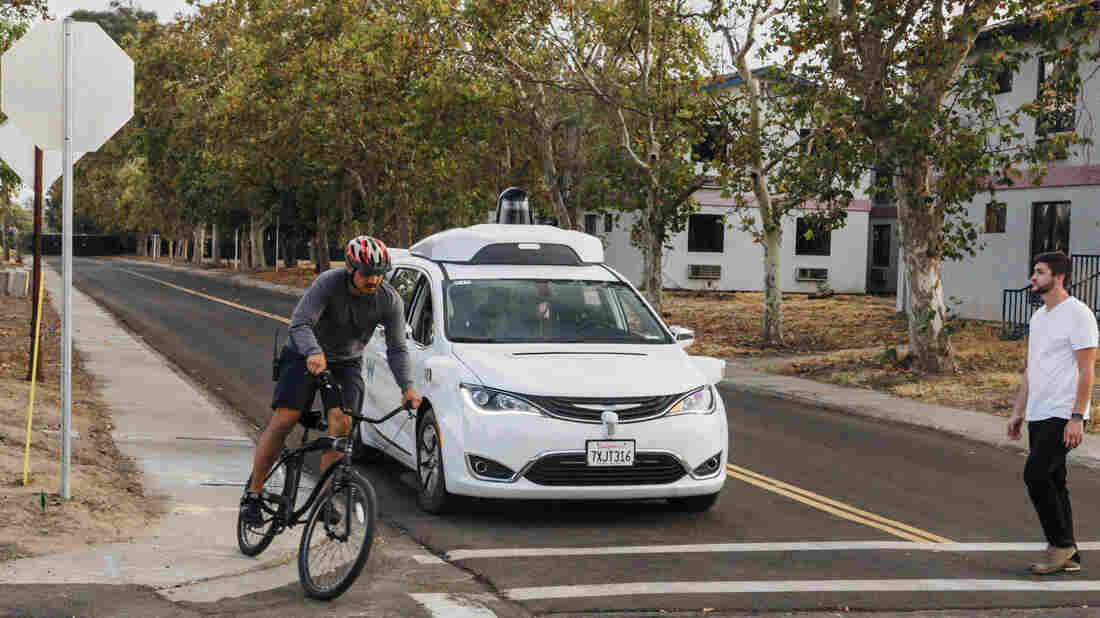 Waymo's Chrysler Pacifica minivan was being tested at Waymo's facility in Atwater, Calif. in October. The company says it's deploying cars without backup drivers. Julia Wang/Waymo via AP hide caption 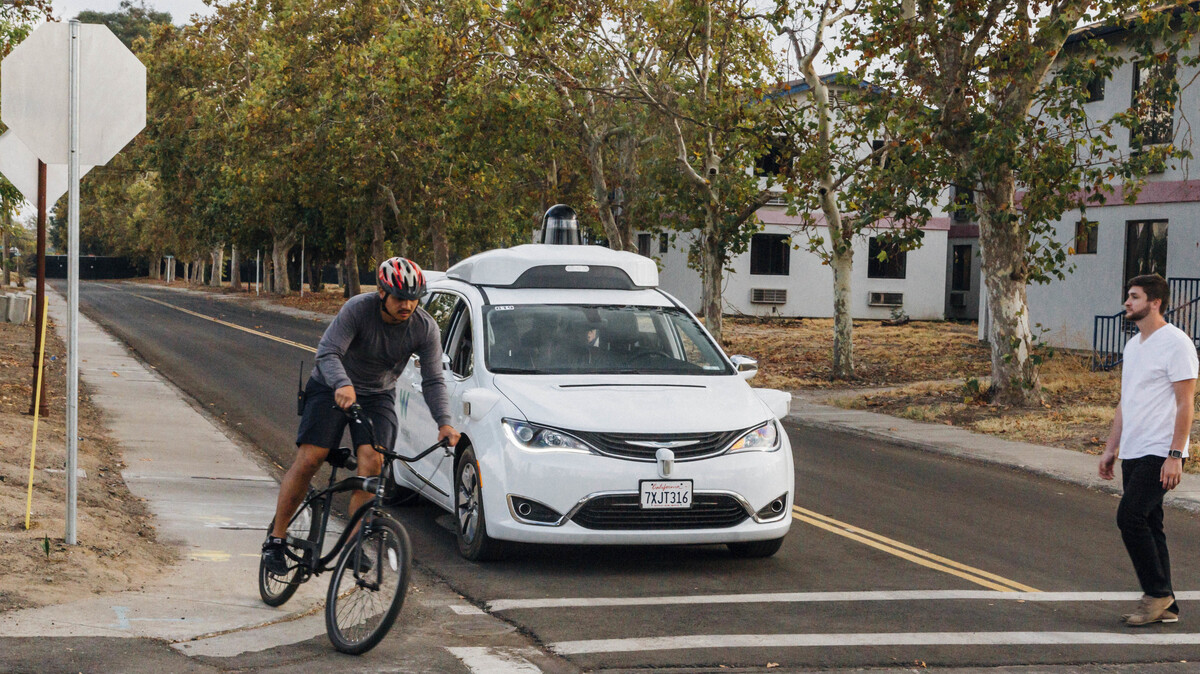 Waymo's Chrysler Pacifica minivan was being tested at Waymo's facility in Atwater, Calif. in October. The company says it's deploying cars without backup drivers.

A new study is bolstering the case for putting more autonomous vehicles on the road sooner rather than later — at the same time that self-driving cars are hitting a milestone in parts of the Phoenix metropolitan area.

A research report released this week argues that deploying driverless cars commercially as soon as they become at least a little safer than human drivers, could end up saving hundreds of thousands of lives — compared to waiting for the technology to be close to perfect.

Meanwhile, on the roads in Arizona, the first public tests of self-driving cars without backup drivers have begun.

Waymo, a subsidiary of Google's parent company Alphabet, announced the move this week, as it deploys a fleet of modified Chrysler Pacifica minivans to operate on public streets in the Phoenix suburb of Chandler, Ariz.

"Over time, we'll cover a region that's larger than the size of Greater London, and we'll add more vehicles as we grow," a company blog post says.

Waymo released a promotional video showing passengers sitting in the back seats of the minivans as the cars drive themselves around:

The company says it has tested its cars on 3.5 million miles of streets around the country since Waymo began as a Google project in 2009.

The road testing without backup drivers will initially have only Waymo employees as passengers, then expand to Waymo's "early rider" program, made up of interested residents in the Phoenix area, in a "few months," according to TechCrunch.

Waymo also plans to focus its business on providing a self-driving ride-hailing service, as opposed to offering cars to own, Ars Technica notes.

"By giving people access to a fleet of vehicles, rather than starting with a personal ownership model, more people will be able to experience this technology, sooner," the company writes in the blog post. "A fully self-driving fleet can offer new and improved forms of sharing: it'll be safer, more accessible, more flexible, and you can use your time and space in the vehicle doing what you want."

The U.S. Department of Transportation reported that 37,461 people died on U.S. roads in 2016. "Human choices" are "linked to 94 percent of serious crashes," the agency says. Drunken driving, distracted driving, speeding and not wearing a seat belt were each associated with thousands of deaths.

Advocates for autonomous cars point out that machines don't get drunk or get distracted by text messages.

Their case was helped by a Rand Corp. report arguing to not allow "perfect to be the enemy of good." Authors Nidhi Kalra and David G. Groves compared how many people would die each year in traffic accidents if driverless cars were 10 percent, 75 percent or 90 percent safer than human drivers.

They considered a number of conditions and variables and found that getting on the roads sooner with cars just slightly safer than human drivers — which "would still cause many crashes, injuries, and fatalities" — would be better than waiting the many years it would take for the driverless technology to become perfect in the lab.

In other words, if automated cars get on the road and start lowering deaths immediately, though not completely eliminating them, it's an improvement from where we are now, the report suggests. And by getting the cars out sooner, they also consider that the technology can improve more quickly than simply continuing to test the cars in practice scenarios.

In their estimation, they find that over the long term of more than 30 years, "more lives are cumulatively saved" by introducing slightly safer cars soon instead of very safe cars many years from now — "in some cases, more than half a million lives."

But there isn't a set system in place on just how safety can be measured without putting cars on the street. How can we know when an autonomous car actually reaches the point of being safer than a human, if ever?

"There is currently no proven, practical way to test autonomous vehicle safety prior to widespread use," Kalra acknowledged to the House Energy and Commerce Committee earlier this year. Problems exist with using road tests similar to how people qualify for driver's licenses; extensive test-driving is "impractical"; and other types of testing are unproven, Kalra told lawmakers.

The DOT issued new safety guidelines for driverless cars in September. But as NPR's Colin Dwyer noted, they're voluntary.

The Senate is considering legislation that lays out a regulatory framework for self-driving cars after the House passed a similar bill in September. Car companies have backed the measure, which aims to get driverless cars on the road sooner and would impose certain uniform standards around the country in the place of various state rules.

Consumer advocates urge caution with both legislation and the public testing of autonomous cars.

Jackie Gillan of the Advocates for Highway and Auto Safety warned in a statement last month about legislation that "puts too much trust in the hands of automakers and places too little importance on consumer safety protections."

Jason Levine of the Center for Auto Safety asked DOT officials on Monday to "explicitly prohibit" testing highly autonomous vehicles "on public roads, in noncontrolled environments, unless and until these vehicles have undergone far more simulation testing — both in terms of miles and sophistication."

The Rand researchers also worry how the public at large will react when those early autonomous cars do get in accidents.

"This may not be acceptable to society," Kalra and Groves write in their report. "A large body of research suggests that people's willingness to accept technological risk is governed by factors related not only to the actual risk but also to other characteristics," like people's control over the situation and being able to choose or not choose to participate.

Three-quarters of drivers in the U.S. say they're afraid to ride in a driverless car, according to AAA. And you can't really choose not to have a self-driving car behind you in traffic.

How residents react as Waymo's backup-less testing expands in Arizona — along with other testing of autonomous cars by companies like Uber around the country — will provide some early indications.

An earlier version of this story misspelled Jackie Gillan's last name as Gillen.