Accessibility links
A Google-Related Plan Brings Futuristic Vision, Privacy Concerns To Toronto : All Tech Considered Sidewalk Labs, a sibling company to Google, plans to redevelop Toronto's waterfront as a high-tech, livable lab. Some residents wonder what a data-driven development could mean for privacy.

Sidewalk Labs, a unit of Google parent Alphabet, is partnering with Toronto to redesign part of the city's eastern waterfront as a high-tech urban neighborhood. Sidewalk Labs hide caption

Sidewalk Labs, a unit of Google parent Alphabet, is partnering with Toronto to redesign part of the city's eastern waterfront as a high-tech urban neighborhood.

Years ago, Google's founders wondered what would happen if they could take their pieces of technical knowledge and apply them to cities.

"We started talking about all of these things that we could do if someone would just give us a city and put us in charge," Eric Schmidt, CEO of Alphabet, Google's parent company, joked recently.

Last month, after a public competition, an Alphabet subsidiary called Sidewalk Labs was chosen as an "innovation and funding partner" to help Toronto come up with an ambitious, tech-heavy plan for a small part of the city's waterfront.

When Waterfront Toronto, the government-created entity tasked with revitalizing the area, asked for proposals for the future neighborhood, Sidewalk Labs responded with a vision of a futuristic, sci-fi-ready smart city.

The company suggested heated pedestrian lanes to melt the snow; a self-driving bus; and a series of underground channels where trash is hauled away, packages might be delivered, and utilities are easier to reach and repair.

Sidewalk Labs has promised to spend $50 million planning the project over the next year. The proposal has raised concerns related to affordability and privacy — it does involve the thinkers behind Google after all.

But, for now, looking at the nearly vacant lot facing Lake Ontario, it's hard to imagine some kind of futuristic utopia. While condos are being rapidly built on nearby lots, the future community remains a dirt-filled patch of land, home to some film-industry trucks with a few historic grain silos on a nearby property.

Doctoroff says he envisions a community where polite taxi-bots and van-bots someday shuttle people around, avoiding pedestrians or cyclists, and transit or bike shares are chosen over car ownership. Thanks to these conscientious self-driving vehicles and the plethora of non-car options, streets will be able to be narrower, he says. And that will mean more room for parks and public spaces.

Along with Sidewalk and Google, Alphabet owns Waymo, a self-driving car company, and Nest, which focuses on technology for the home. (Google is an NPR sponsor.)

At a news conference in early October, Canadian Prime Minister Justin Trudeau said the development would also bring well-paying jobs to the city by creating an urban "innovation hub." 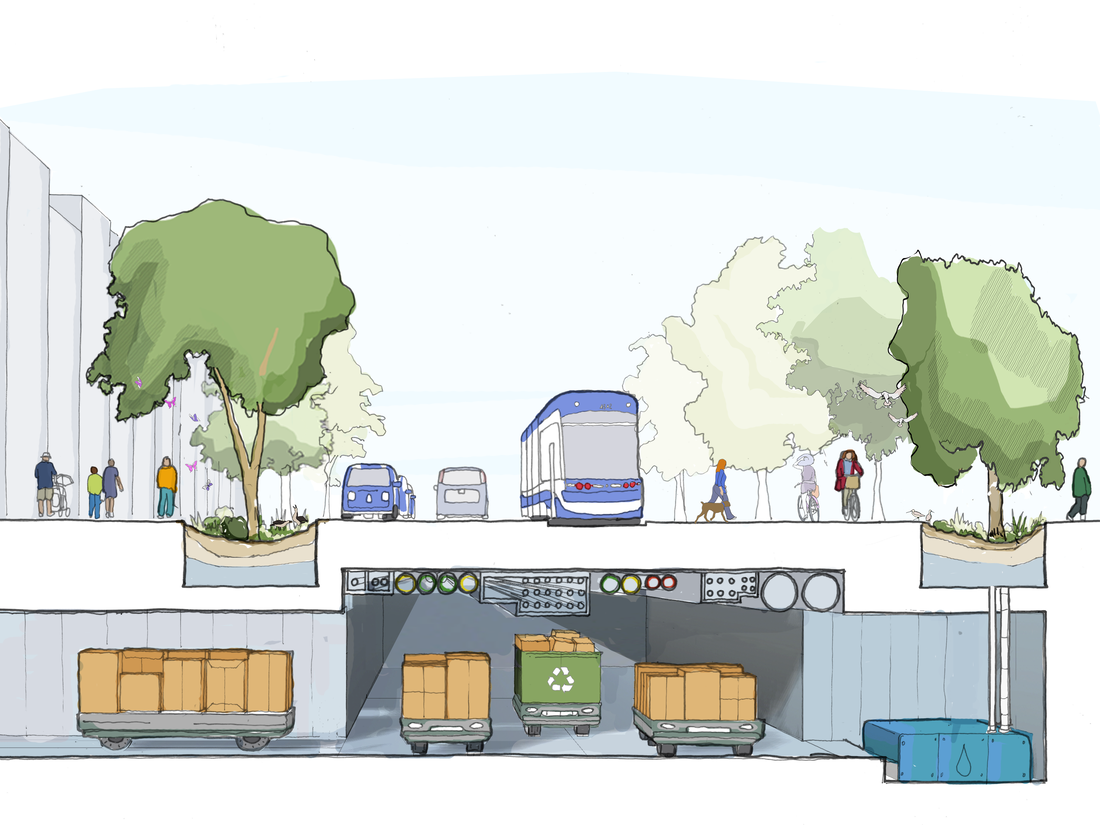 Sidewalk Labs' proposal includes a series of underground channels where trash is hauled away, packages might be delivered, and utilities are easier to reach and repair. Sidewalk Labs hide caption 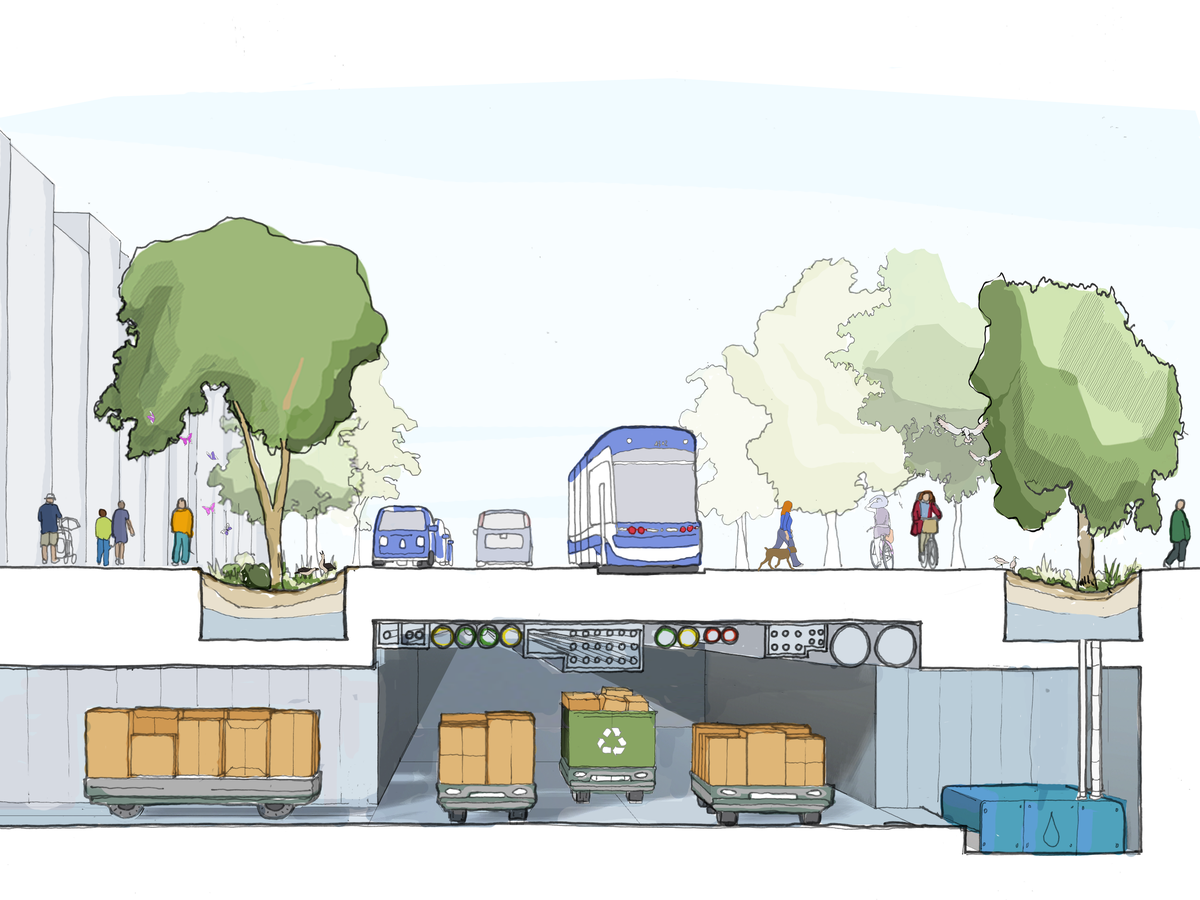 Sidewalk Labs' proposal includes a series of underground channels where trash is hauled away, packages might be delivered, and utilities are easier to reach and repair.

Torontonians seem to have mixed views on the project.

At a town hall meeting Sidewalk Labs held for Torontonians to talk about the upcoming plan, a small group of housing activists with ACORN Canada protested outside, saying that the company's vision for affordable housing had not been adequately laid out.

Alejandra Ruiz Vargas, a local ACORN spokesperson, said she wants homes for low-income people included in Sidewalk Lab's plan. "This is a concern," she said. "Because we're in ... a housing crisis."

Sidewalk Labs says it's hoping to increase affordability with modular construction technologies that make buildings easier to erect, and easier to change depending on the needs of the neighborhood.

Others at the event were excited about the new project. Asma Khan, a 35-year-old project manager at a tech startup in Toronto, lives near the waterfront. She said that for years she and her friends have "talked and pondered about how abandoned it feels."

Other local residents had questions about what a data-driven development could mean for people's privacy.

"We're worried that Google might be using this as a lab to test the people that live there — and we just want to make sure that people's privacy is protected," said Donna Patterson, a neighborhood activist who says she lives near the site.

In Sidewalk Labs' response to Waterfront Toronto's request for proposals, the company also details how it will use sensors and data collection to measure how different urban designs are working.

Sidewalk Labs' Doctoroff says data collection has one goal: to "improve quality of life." Because the neighborhood is starting from scratch on an empty lot, he says, privacy can be baked into the design of the plan.

"We all know that privacy in public space today is sort of a mess," he says. "Everybody has cameras; we don't know where they are; people are collecting data in all sorts of different ways; there are no standards for it."

In Canadian newspaper The Globe and Mail, Doctoroff was quoted describing the plan as a "real estate play," but in an interview, he seems to have a broader outlook on what could come next.

"If you can provide really dramatic benefits to people there are always ways of making money," he says. "Now, what will those ways be? They might be associated with development. They might be the licensing of technology. We have plenty of time to figure that out."