Accessibility links
I Know Where You've Been: Digital Spying And Divorce In The Smartphone Age : All Tech Considered Breaking up is hard to do, and spy tools are making it even harder. According to family lawyers, scorned spouses are increasingly turning to GPS trackers and cheap spyware apps to watch an ex. 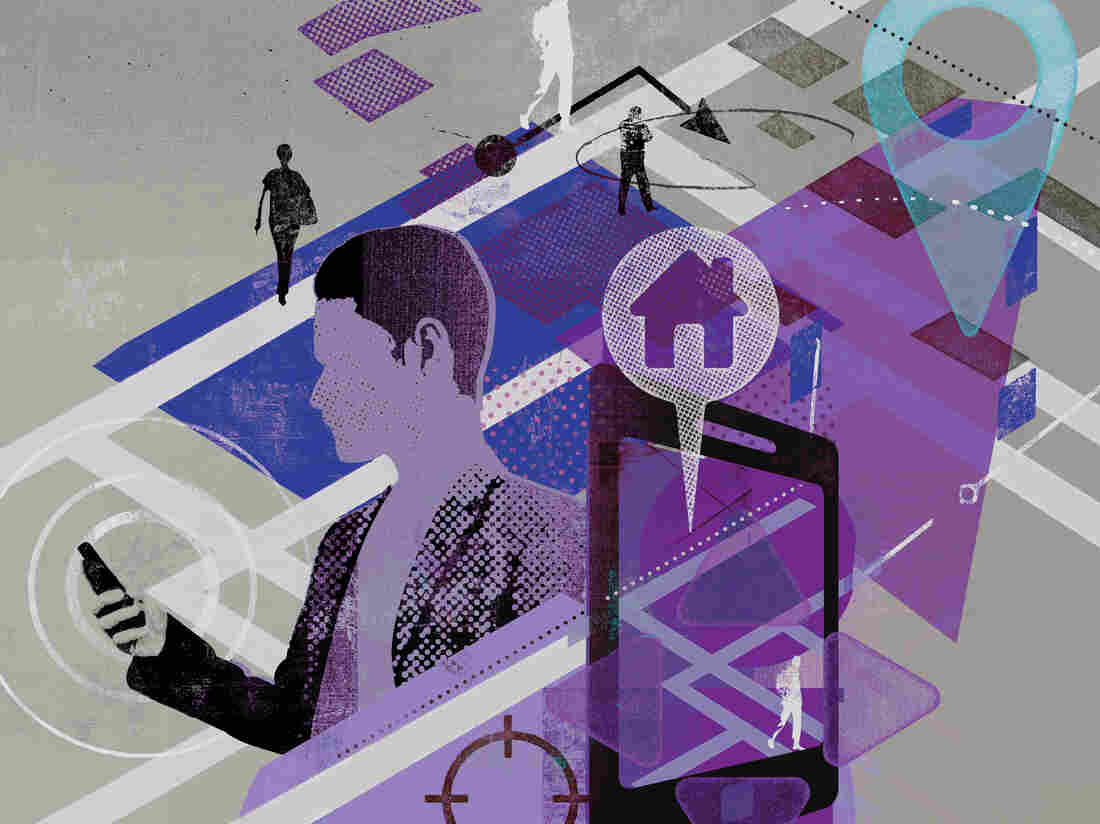 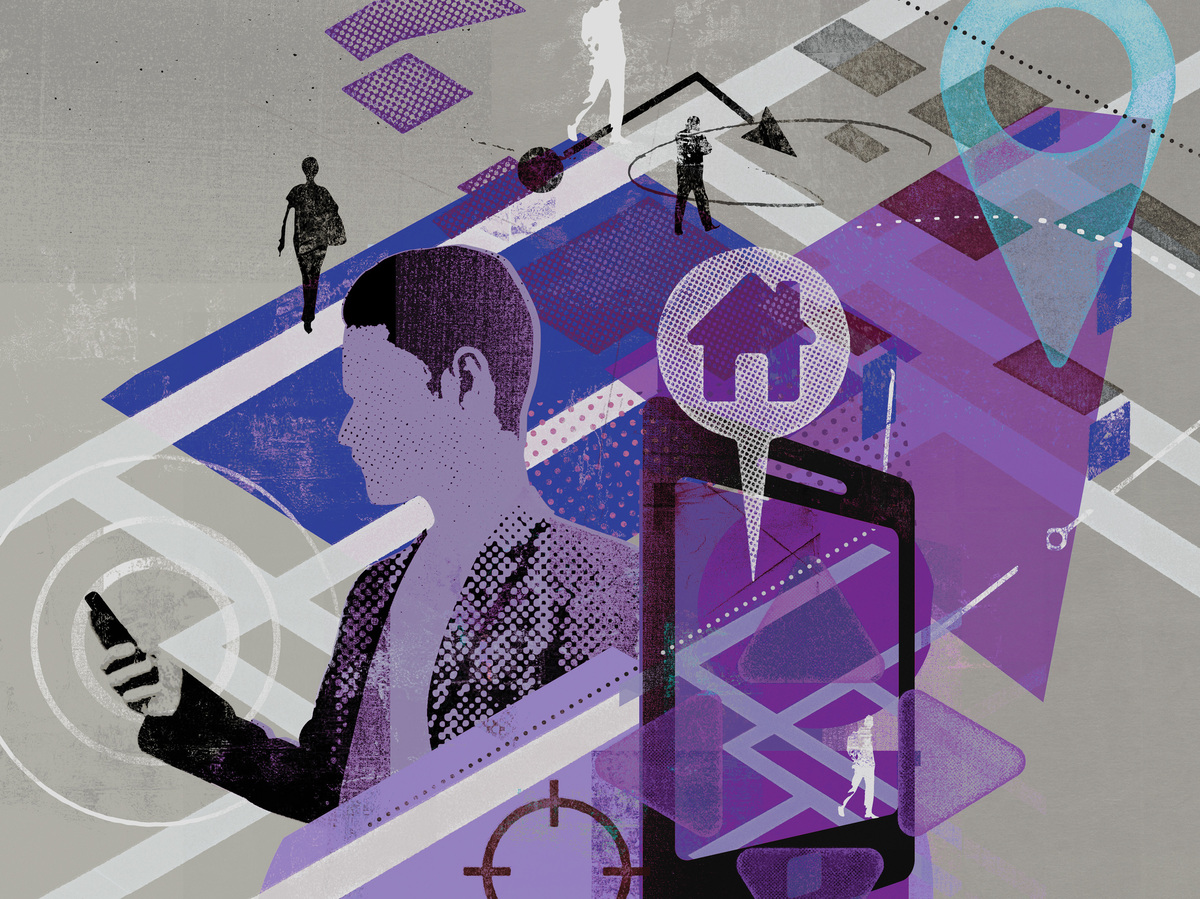 According to family lawyers, scorned spouses are increasingly turning to GPS trackers and cheap spyware apps to watch an ex.

It was the summer of 2016, and M was worried her ex-husband was stalking her. She would get out of town and stay with friends. But, as she noted in court documents, her ex seemed to know exactly where she was and whom she visited — down to the time of day and street.

M started to change the way she drove — slowing down, driving in circles — in case a private investigator was following her. She didn't see one. Then she went online and learned about GPS trackers — small devices you can slip into a car to monitor where it goes 24/7. She looked for one and couldn't find any.

Weeks later, when she took her car to a local auto shop for maintenance, she asked the mechanic to look. He found the GPS tracker near her front left tire.

Digital spy tools like that GPS tracker are changing divorce as we know it. Increasingly, couples are turning to the latest technology to spy on each other as their marriages fall apart, according to dozens of divorce lawyers, investigators and even a leading family court judge whom NPR interviewed. Tools are cheap and easy to use — from something as simple as the Find My iPhone feature to spyware that can be installed in a spouse's computer, phone, or even a car, as M had discovered.

NPR interviewed M, her lawyers and the police sergeant she filed a report with; we also reviewed her court filings and those of her ex-husband. We won't disclose any of their names or where she lives to protect her identity because she fears for her safety.

Back at the mechanic, M looked at the device — it was a small black box. The sales clerk there pushed the button to show that the batteries still had 25 percent to 50 percent energy remaining. Meaning, they had been in use for just a few weeks.

That was odd, because M had left her husband nearly a year earlier. But her ex-husband had found a way through technology to stay abreast of her movements. It may sound intrusive, but it was legal.

M's husband acknowledged through a lawyer's letter and in family court that he had the GPS tracker installed. The sergeant from the police station did a criminal investigation. But, he tells NPR, prosecutors would not prosecute because the car was jointly owned; if it belongs to both of them, the ex had a right to track it.

After discovering the GPS tracker at the mechanic, she went directly to the police precinct to give a statement. NPR reviewed the video recording; M spelled out for the sergeant how it felt to discover she wasn't going crazy when she suspected that she was being watched.

"I'm terrified. I am absolutely terrified," she said at the precinct, holding back tears. "I might still be functioning. But that doesn't mean I'm not terrified."

Welcome to divorce in the 21st century — when what it means to be safe and how much privacy you're entitled to are open questions. M's case is not unique. NPR talked with dozens of marital experts. They say digital spying is changing divorce as we know it. The tools are abundant. Clients use it in an effort to stay in control after a separation or to gather evidence of extra-marital affairs or drug abuse. But the laws are murky, and law enforcement is lagging far behind.

Lawyers say that partners in breakups sometimes install spyware on computers or phones. These are apps that are available for a subscription fee, say $16.99 a month. Once installed, people can see every incoming and outgoing message from the target's phone, Web searches, even keystrokes — the letters someone is typing, say, when they log into a bank account. And spyware takes just minutes to install.

The legality of tracking technology is messy. Parents are allowed to put spyware on a child's phone or a home computer, for example. But, experts say, putting it on a spouse's smartphone without consent is generally illegal.

Lawyers say they can't prevent their clients from using digital spying. Some are willing to accept such evidence if legally obtained and will even present it in court to help their client's case. Other lawyers don't want to get near it.

"I have little power over a client's curiosity," says Susan Myers, a family law attorney in Houston. "More often than not, they've already done the [illegal] act by the time they show up to my office." She says her office will not accept it as evidence because then she too would be subject to criminal liability for wiretapping and intercepting electronic communications.

Emily Miskel, a family court judge in Collin County, Texas, has a different perspective on what is really happening. "Lawyers are extremely conflicted and confused," she says. "[They] are put in a position of having to choose between a rock and a hard place, because [their] duty is to zealously advocate for clients which means using every bit of evidence that can help their case."

Not just evidence, but control

M doesn't think her ex stopped at the GPS tracker. She suspects he used spyware on her phone, in an effort to stay in control. She left him and took their child after, she says, he choked her.

In family court — in her affidavits and oral testimony — M laid out her fear of both physical abuse and electronic surveillance. M claimed her ex seemed to know the contents of her text messages — which friends she talked to, even after she left the house.

M gave NPR this one example of an unsettling message her ex-husband sent: "I know all of the ways you've described me to your friend." She says snippets of how she described him were then forwarded to her as a text message.

Her ex has denied all allegations. And the judge focused on the physical charges, like choking, rather than on the digital spying allegations.

With her suspicions raised after discovering the GPS tracker, M went to an Apple store for help locating spyware on her phone. She says the Genius Bar employees didn't look for the spyware; instead they helped her by swapping the device for a brand new one. But that meant that the evidence, if any, went along with the phone. This is common in spyware cases, in which victims solve the immediate problem but can't present proof for an investigation.

What the data show

In 2012, the last time the Justice Department attempted to quantify stalking, it estimated that 1.5 percent of all adults in the U.S. were victims. That figure more than doubled — to 3.3 percent — for people who were divorced or separated.

I see it in their eyes. I tell them: 'Don't do it.' But they still do it. And you know personally, if it was in my life, I'd be tempted.

An even earlier DOJ survey of stalking victims in 2005 and 2006 found that electronic monitoring of some kind was used on one in 13 victims. This was before iPhones and the smartphone era.

Criminal prosecutions and civil lawsuits over digital stalking remain, however, few and far between. Experts say a huge barrier to criminal prosecution is that local police cannot or will not investigate. People who believe they are victims have to pay thousands of dollars out of pocket to get a private investigator who specializes in digital forensics to diagnose their smartphones or laptops. It's far cheaper to just wipe out a hard drive or trade in a device — as in M's case — than to document that a crime has occurred.

NPR reviewed two dozen cases that have made their way into criminal or civil courts and found that punishments are uneven for use of spying tools. In a 2007 case, a man in Austin, Texas, who used software called SpyRecon against his wife got a four-year prison sentence. Meanwhile in 2011, an appeals court found that a Minnesota man who used a GPS tracker on his wife did not break the law because she was not the sole owner of their car (similar to M's case).

Randy Kessler, an attorney based in Atlanta, says candidly about his clients: "I see it in their eyes. I tell them: 'Don't do it.' But they still do it. And you know personally, if it was in my life, I'd be tempted."