Accessibility links
How Apps Helped Log One Long-Distance Couple's 'Love Letters Of Our Time' : All Tech Considered The odds of finding your future mate on an anonymous chat site seem low. But that's how a woman in Detroit and a man in Wales met. And their romance blossomed thanks to apps like Snapchat and Skype.

So, how do couples keep the magic alive when they're miles – and an ocean — apart?

For the soon-to-be-married pair Elizabeth Schunck and David Rees, the answer is through their apps.

"David and I talk to each other every single day," Elizabeth says. They mostly use Skype or Snapchat, David adds.

They were improbably connected in February 2016 on Omegle, a website that pairs two anonymous, random people in one-on-one chat sessions. Then apps like Snapchat, WhatsApp, Facebook Messenger, iMessage, Couple — specifically for romantic partners – and Skype helped the long-distance love blossom.

Fire up an Omegle chat, and you'll find a message that reads "You're now chatting with a random stranger. Say hi!"

"ASL?" David wrote. ASL is an abbreviation for age, sex, location, often used online to find out more about an anonymous respondent.

"Wales? Wait, that means he has an accent," Elizabeth thought. "Be cool," she remembers thinking. "Don't say anything about it."

Thanks to the nature of the site, conversations on Omegle are usually light and superficial. But "sparks flew," she says, as they talked about what their lives were like on opposite sides of the Atlantic. So it didn't seem like a stretch to share personal details — their Snapchat names — with someone they'd never seen or heard (or frankly, had any way of confirming they were who they said they were).

With this, they entered in to a new, slightly deeper level of communication. 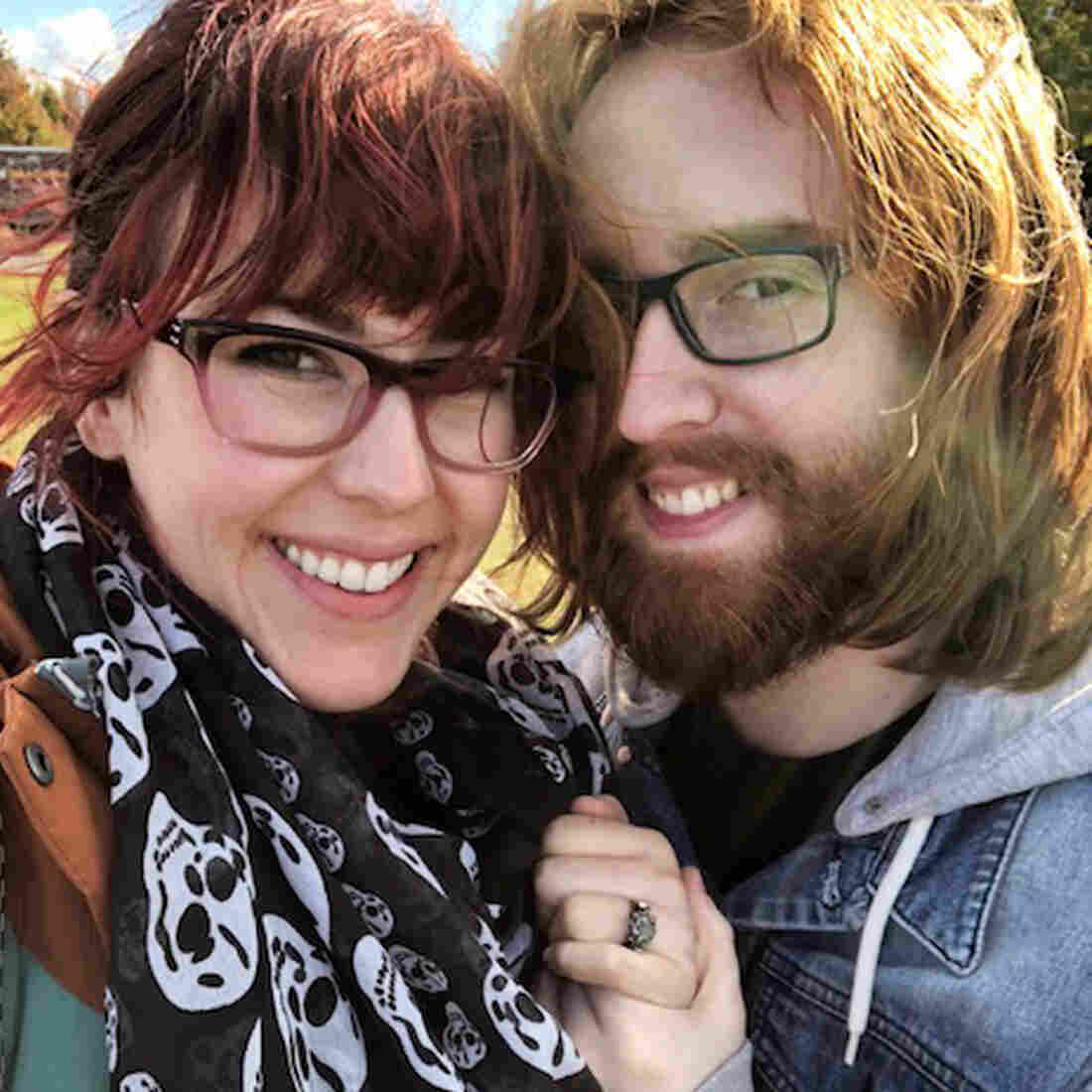 Elizabeth and David visited each other four times for a total of 54 days, and on their most recent visit, David proposed and then bought a house for them in Wales. Courtesy of Elizabeth Schunck hide caption 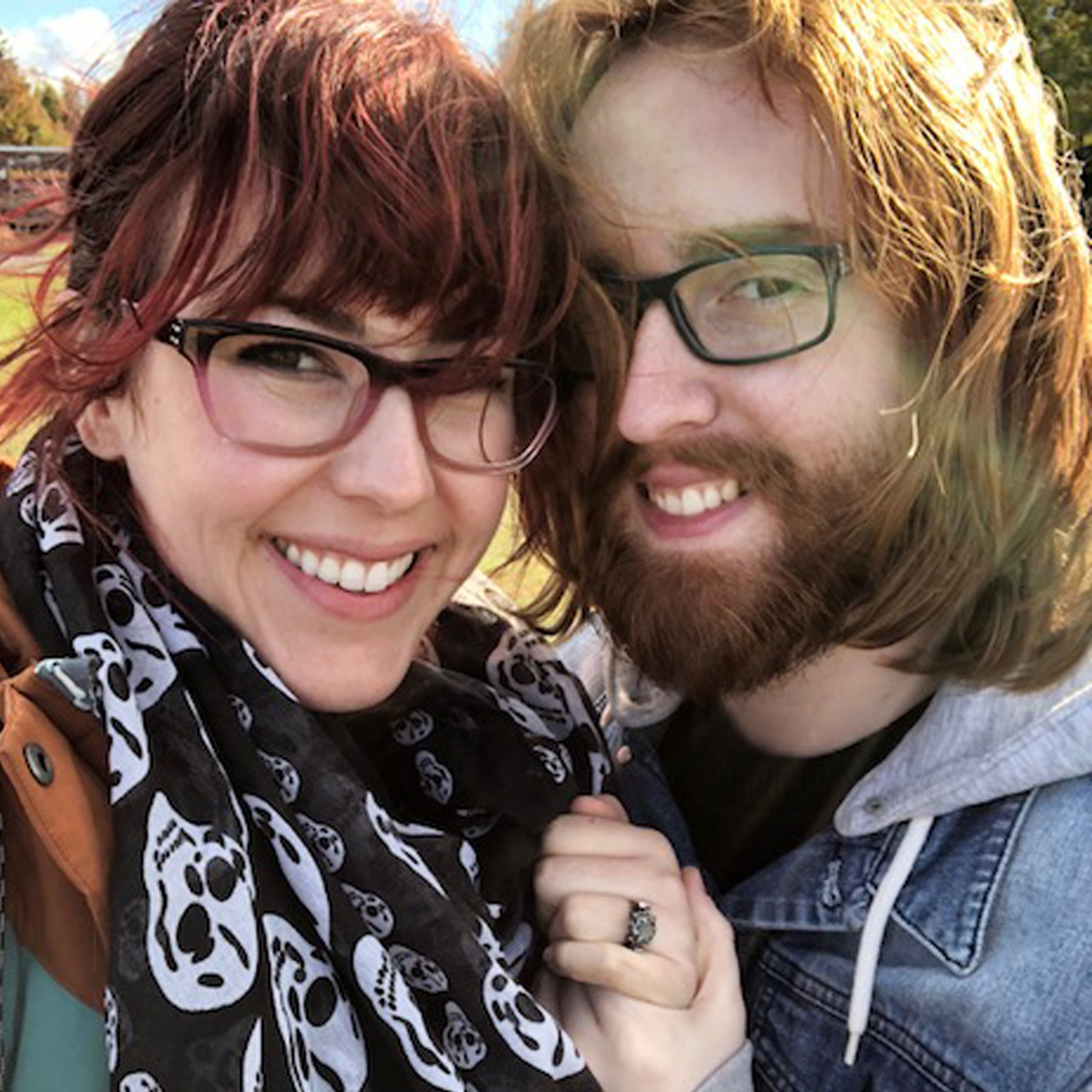 Elizabeth and David visited each other four times for a total of 54 days, and on their most recent visit, David proposed and then bought a house for them in Wales.

At first, their Snapchats were nothing more than two people getting to know each other. Elizabeth was married, though unhappily and, as it turned out, nearing a separation, and David lived in Wales — 3,588 miles away from Detroit. Their future looked platonic. On Snapchat, she would send a message about her day at work; time zones away he would respond, and then both messages would disappear forever.

As they talked more, the ways they communicated expanded. First was the anonymity and security of Omegle, followed by the impermanent — but more personal — Snapchat. They then moved to the friendly territory of Facebook to sharing personal phone numbers for texting and calling, and, finally, to Skype — the closest they had to face-to-face contact.

These were the building blocks of their relationship.

Video chatting on Skype was when the two would explore their cultural differences; learning more about the lives each led.

David was amused by Elizabeth's efforts to try and correctly pronounce Welsh words. He remembers getting her to say Merthyr Tydfil, a town in Wales, and the name Llewelyn. Elizabeth shared her world, introducing David to the Midwest U.S., including city names like Cheboygan or Mackinac.

Elizabeth thought she and David communicated with ease, which wasn't as common in her marriage. For some time, Elizabeth felt isolated. She was tired of trying to force it, trying to make her marriage work. "We decided we shouldn't be married anymore," she says, "that we needed to separate."

Having David's friendly presence in her life helped Elizabeth cope. And it wasn't long before they both, she says, "caught the feelings."

Three months after they were randomly paired on Omegle, David sent Elizabeth a message through Snapchat – one that was risky, vulnerable and potentially life-changing.

"You're one of the greatest people to come into my life, and I'm grateful for meeting you," it read. "I am glad for everyday of knowing you, Elizabeth."

When they look back at the evolution of their relationship, they remember this message. It's what Elizabeth calls David's "first declaration of liking me."

"Literally all that was going through my head was Elizabeth," David remembers.

It wasn't long after that Elizabeth returned the feelings and they planned their first meet: a nine-day-long rendezvous in Wales.

As the trip grew closer, Elizabeth felt anxious. There were things beyond her control, like, what if they didn't like the way each other smelled? Needing comfort, she turned to the long-distance subreddit, a forum on Reddit where people can share their relationship experiences. She shared her worries, hoping that commenters in similar relationships would give her advice.

"I'm an American that has fallen in love with someone from across the Atlantic," the post begins. "I've been in love before but, not anything like this. It scares the s*** out of me."

David knew of Elizabeth's nerves, but not that she loved him. Over Skype, Elizabeth shared her anxieties about the trip, and she mentioned how she hoped to find solace from other Reddit users in similar long-distance relationships. As Elizabeth kept talking, David did some digging.

"Being the detective that I am, I Googled 'Reddit long-distance relationships'," David remembers. And he found Elizabeth's post. "I opened it up, and I read it out to her."

His face changed as he read it. He looked still, and for a moment Elizabeth worried her fears might be reality. She had put herself out there, and on Skype, she watched him react to her words.

"I love you, too, Elizabeth," David said when he finished reading.

'The love letters of our time period'

Over a year later and the two still live on either side of the Atlantic. But, they have plans to spend their lives together. They've visited each other four times for a total of 54 days, and on their most recent visit in October 2017, David proposed. Then he bought a house for them in Wales.

Elizabeth Schunck and David Rees meet for the first time.

Like any love story, this one isn't without its problems. Being apart for the majority of their relationship has left both feeling insecure sometimes.

"I still kind of struggle with feeling that [this] is not a real relationship," Elizabeth says. "When he needs me, I am a thousand miles away. ... It's hard to be so far away from someone for so much of the time that you spend with them."

The space between them has forced them to find a way to stay close. Elizabeth says the solution was to create it through communication, and technology gave them that opportunity.

"I always think technology will be a big part of our relationship," Elizabeth says. "Snapchat, iMessage, they're the love letters of our time period."

Their record Snapchat streak — consecutive days snapping each other — is 285.