Accessibility links
Our Weekend Music Mix: 5 Songs To Get This Show On The Road : Alt.Latino Whether you plan to go crazy on the dance floor, or be driven crazy by your kids, here's five songs to get your weekend started.

Our Weekend Music Mix: 5 Songs To Get This Show On The Road

Our Weekend Music Mix: 5 Songs To Get This Show On The Road 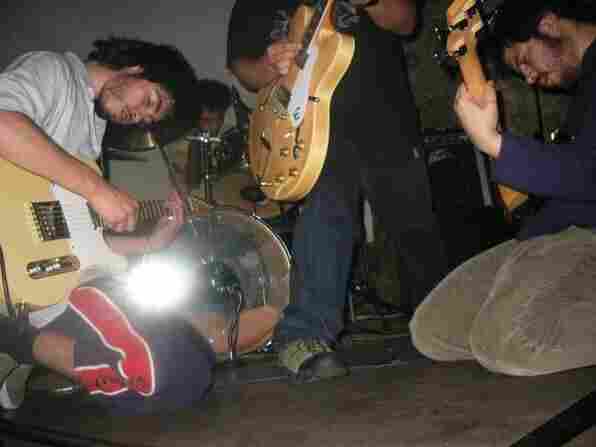 Chile's Fother Muckers: They're either asleep or having the best weekend of their lives. Or both. courtesy of the artist hide caption

Listen to while: Weekend cleaning; picnics in the sun; walking in the park.

In this week's show, we discussed Latin artists who are mixing the traditional with genres like rock, electronica and rap. We couldn't include everyone we wanted to, and one of those artists was Mariana Baraj. This Argentine musician and composer has been blowing us away with her interpretation of folk. "La Guada" is a sweet love song which proclaims "El encanto que llevas dentro, se ha convertido en mi templo." ("The charm you carry inside of you has become my temple.") However, it's clear that in this music video, the true love affair is between the musicians and their lovely traditional instruments: The accordion, the charango, and the chachas (an indigenous instrument made of animal nails and tiny bones) which she is wearing around her ankles. In any case, this song is perfect for a picnic or a long walk in the park.

Listen to while: Relaxing while your kids are out there doing who knows what; barbecuing.

This has a slow, steady burn to it, just like my work on the gas grill on Saturday nights. Folks like me still have life in us at this hour, but we need it a little more relaxed while the youngsters head to the dance clubs. My Washington, D.C. homeboys Thievery Corporation speak my lingo. In fact, they speak the dance club lingo as well. Don't make too much noise when you come in late. Audio is from YouTube.

Relaxed weekends in the park and bike rides in the sun aren't for everyone. For those who plan to work up a sweat on the dance floor instead, here's some suggested tracks.

Listen to while: Pre-nightclub drinks; checking your fine self out in the mirror.

Bostich and Fussible, members of the Tijuana electronic group Nortec Collective are releasing their new album Sept. 14. (Psst: NPR Music is doing a First Listen way before that.) This first single off the album I Count The Ways features Kylee Swenso of the San Francisco electronica-pop group Loquat. It's a relaxed but exciting tune -- feels a lot like getting ready to head out for a night of fun. The violin crescendos and Swenson's smooth vocals gives it a deliciously disco sound, but Bostich and Fussible keep their border sound present with a constant bed of accordion and trumpets. We like!

Listen to while: Driving family members around in what seems like a purgatory on wheels (it'll help you relax); driving to the club.

The weekend means lots of carting the kids around to birthday parties, soccer games and other recreational (for them) activities. So I spend a lot of time in the car. This track from the San Francisco band Bang Data's 2009 album Maldito Carnaval could be my theme song. The beat is as hard-driving as the number of stops on my carpool route. It’s actually an ode to the age-old custom of cruising: Driving endlessly, going nowhere, showing off. I've put in quite a few miles doing just that in the past. Now I just drive, "Driving Steady" as the band says.

Listen to while: Feeling like the night is young, and so are you, although your knees are hurting from so much jumping up and down.

I love this Chilean band. Their recent album Si No Tienes Nada Que Decir Entonces Calla (If You Don't Have Anything to Say Just Shut Up) feels like an ode to urban nightlife.