Accessibility links
Princess Nokia Goes Full Emo : Alt.Latino The Nuyorican rapper, best known for her relentless flow and urban bruja vibe, pens a love letter to the emo and pop-punk she loved growing up on her new mixtape, A Girl Cried Red.

"Everyone I love leaves me when I need them most / My little heart is broken and the world will pay the cost / Smash my heart in pieces / It looks so good on the floor," Princess Nokia laments on "Your Eyes Are Bleeding," as if reading lines at random from the aisles of Hot Topic. The lines are delivered in the same adenoidal over-enunciation that bands like Blink-182, The Promise Ring, New Found Glory, Panic! At The Disco and Saves The Day codified into a suite of (barely differentiated) sub-genres. Replace this song's lush acoustic guitar beat loop with electric guitars — heavy on the gain and at thrice the speed — and you've got the conflicted fuel needed to scribble those lyrics in black Sharpie all over your high-top Chucks.

The Nuyorican rapper has cultivated a measure of fame for the distinct flow combining brujería feminism, Harlem skater-goth attitude ("Goth Kid") and Afro-Latinx indigeneity that she swirled into coherence on 2017's 1992 Deluxe.

The video for "Your Eyes Are Bleeding" juxtaposes footage of Frasqueri over the past two years of her touring — wearing baggy low-rise jeans, big hoops, and crop-tops — alongside a softer, trying-to-be-harder side of her that wears a Slipknot shirt, red-and-black striped sleeves and a studded cuff. 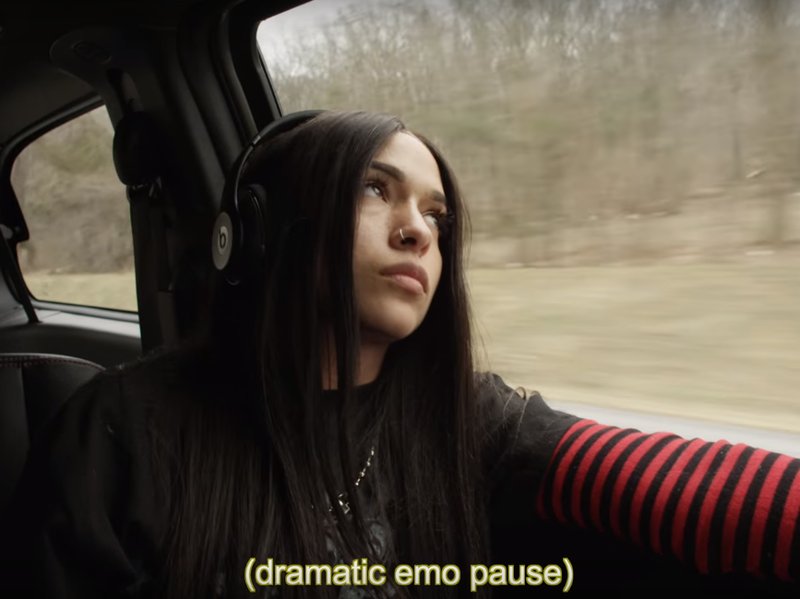 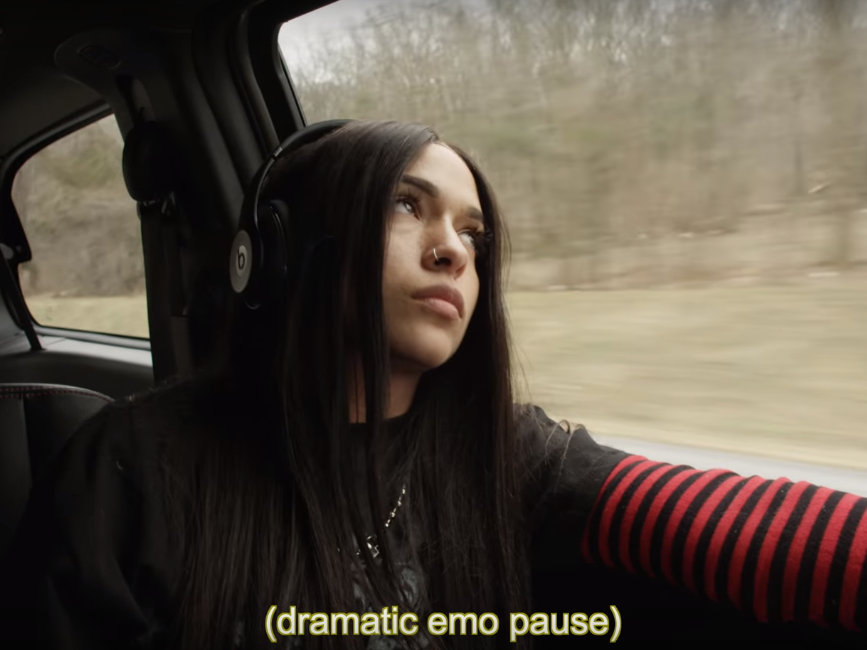 "Your Eyes Are Bleeding" is perhaps the most mall-goth song on A Girl Cried Red — a stuck-in-the-suburbs diary of angst from a city girl, abandoning Frasqueri's rapping wholesale for her sing-song Avril voice. Tracks like "Flowers and Rope" and "Little Angel" lament the simultaneous lack of control and guilt for everything that ever goes wrong particular to young women.

In February, Frasqueri launched her Beats 1 show The Voices In My Head, the first episode of which shares a title with "Your Eyes Are Bleeding" and tells her stories of growing up brown and emo. "My experience is that white kids love hip-hop, and brown and black kids love rock music," she says in the first episode. "That shows that brown kids – they carry emotion, they carry pain, they carry oppression and strife," making the point that these bleeding-heart-on-the-sleeves soundtracks offered an escapist path to those brown and black teenagers.

In incorporating and owning these personal inspirations and touchstones, Princess Nokia stands adjacent to a new generation of rappers now referred to as "SoundCloud rap," many of whom have cultivated lo-fi textures and are unselfconsciously owning references to bands like Linkin Park and Papa Roach. But unlike them, A Girl Cried Red is an expression of Frasqueri's artistic and emotional versatility, not of her defining aesthetic — and because of that, she transcends them.

A Girl Cried Red is out now on Rough Trade Records.