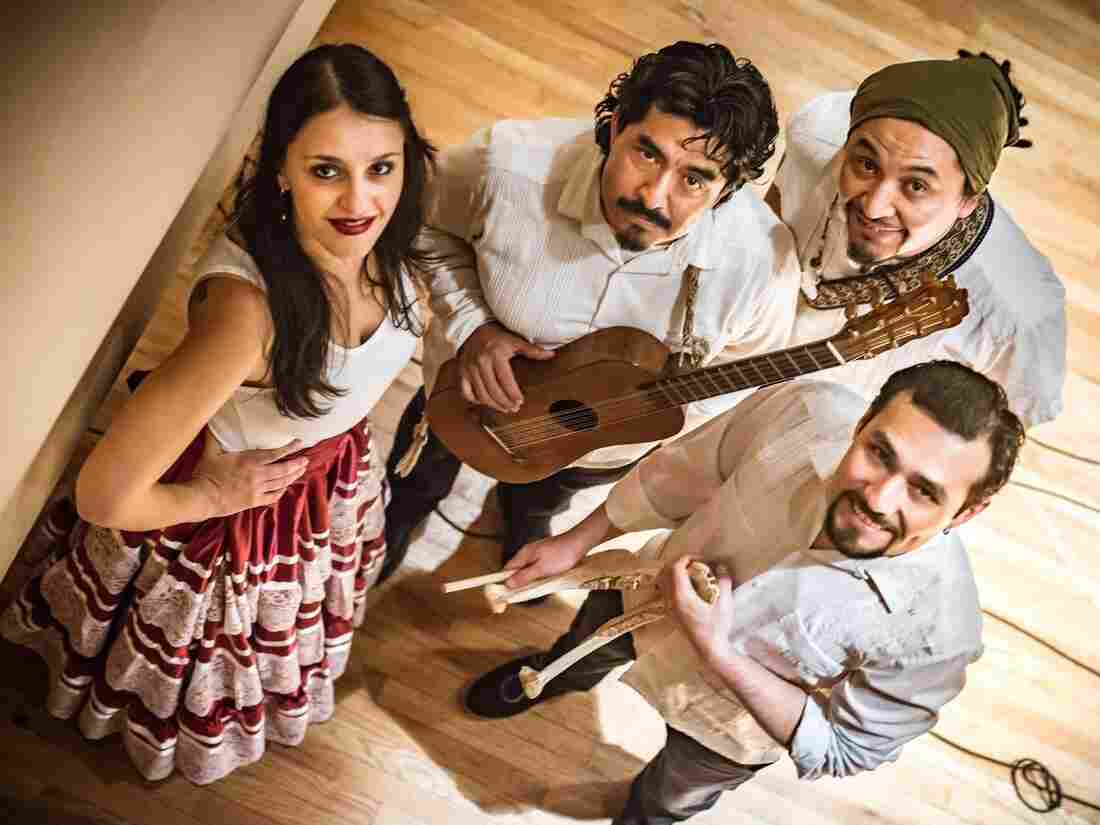 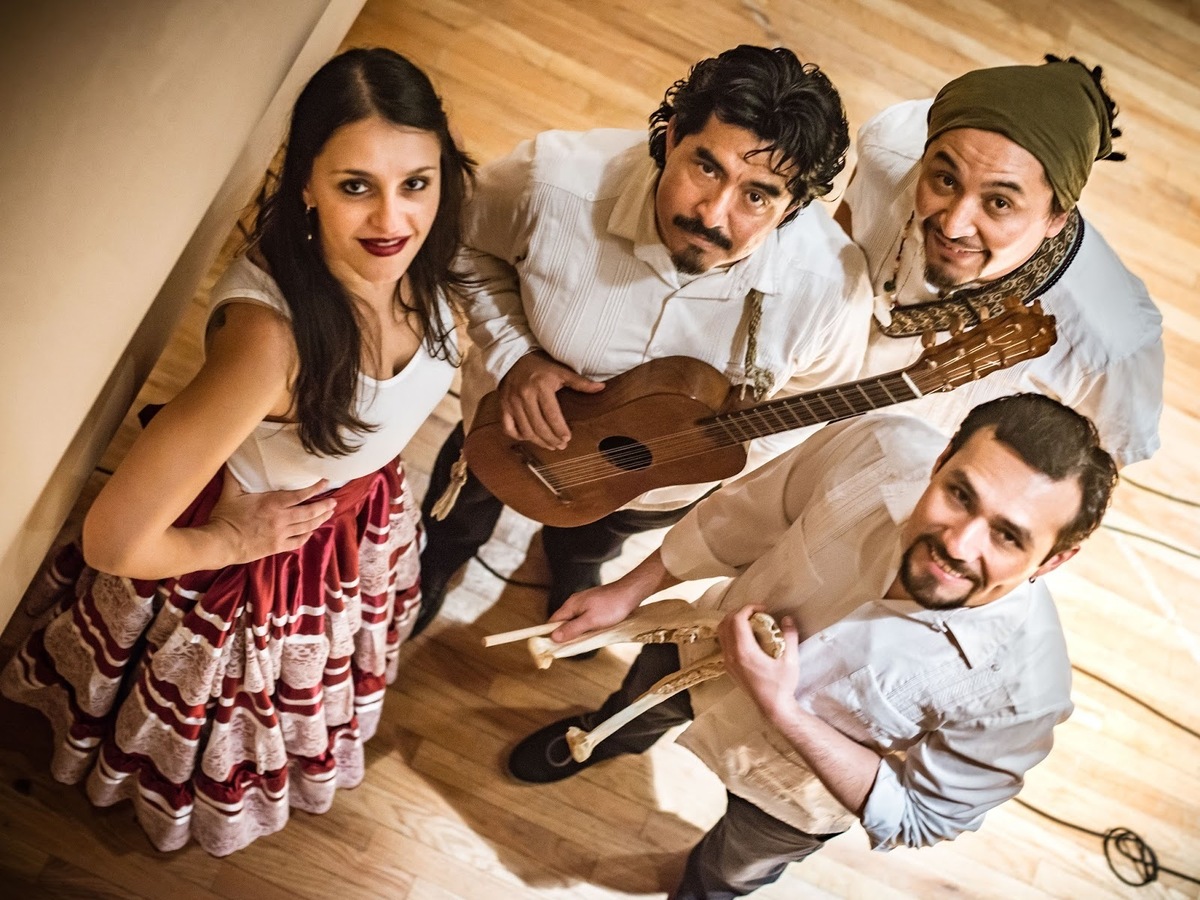 Mar Joya/Courtesy of the artist

Rios de Norte y Sur (Rivers from North and South), the sophomore album from New York City's Radio Jarocho, pays loving homage to an art form that crossed the border with Mexican-American immigrants and has taken root in towns and cities around the U.S.

From its birth in colonial Mexico in the collision of indigenous, African and Spanish cultures almost 500 years ago to compositions in honor of the Mexican Revolution in the early 1900s to the familiar rocked-out versions of "La Bamba" created on this side of the Rio Grande by Ritchie Valens and, later, Los Lobos, son jarocho is a genre that has soundtracked the Mexican and Mexican-American experience like no other.

Rios de Norte y Sur follows Radio Jarocho's 2012 debut, Café Café, and features Zenen Zeferino, an internationally acclaimed poet, musician and member of a celebrated family of traditional musicians of Afro-Mexican and indigenous descent from Veracruz. But because as a group of Mexican-Americans based in New York City, Radio Jarocho absorbs other influences and non-traditional instrumentation — like the double bass, played by accomplished Latin Jazz musician Victor Murillo — to structure these tunes in fresh and surprising ways without losing respect for the music's venerable heritage.

The genre's European influences show up in the jaranas, guitar-like instruments of various sizes, as well lyrical structures that reflect a poetic form born in 16th-century Spain. Both Zenen Zeferino and Radio Jarocho's Juan Carlos Marín are master jarana players, and well-versed in the form's poetic tradition. Africa's contribution to the style emerges in the marked call and response of the music as well as its percussive dancing. Julia del Palacio, vocalist and dancer in Radio Jarocho, performs the vibrant zapateado, a form of rhythmic, rapid footwork that scholars theorize may have originated when African drumming was forbidden to limit communication between the enslaved. At the same time, Del Palacio's flamenco-influenced free hand movements (in jarocho, the dancers typically hold and wave long skirts) reveal the moorish strains that shine in certain songs. The band also highlights the music's rapturous odes to nature with the inclusion of a donkey jawbone instrument, whose teeth are strummed so they rattle percussively.

Son jarocho has sometimes had a prickly relationship with authority: Lyrical double entendres, thinly veiled criticism of ecclesiastical figures and a purported fostering of lewd dancing led to it being formally denounced to the Holy Inquisition in the 1700s. Today, as an immigrant art form being shaped by the cities in the United States to which it was transplanted, it has flourished as protest music for immigration reform and migrant justice, movements in which Radio Jarocho has also participated. It's also perfect party music: Son jarocho is customarily played in the fandango, a community celebration where people gather to play, sing and dance.

The songs on Rios de Norte y Sur are, in large part, beloved exemplars of the son jarocho songbook, delicately nuanced with contemporary flourishes. Here are some highlights:

"La Vieja" sprinkles just the lightest amounts of Spanglish into a classic tune that tells the story of a woman praying on her bed as animals compliment her to try to entice her to do otherwise, and reimagines it all as happening in several of New York City's boroughs.

Another classic son jarocho tune, "Cascabel" — a different version of which was chosen by Carl Sagan in to be included on the Voyager Golden Record — illustrates the power of the rattlesnake, a frequent motif in the music and culture.

The major African influences in son jarocho shine in "Conga de San Benito" and its lyrics about a venerated black saint.

"El Misterio," a new composition in the tradition by Zenen Zeferino, embodies a mournful lament honoring the untimely death of his brother.

And one of the most beautiful ballads in the album, "Balajú," is a sensual musing on love and communion that just exudes longing and desire.

The album is crafted with careful attention to the details of the tradition, and in many ways the sound of Radio Jarocho hews closer and more lovingly to son jarocho than other U.S. jarocho bands. Yet, the band's beautiful execution of the classics, new compositions faithful to the genre and gentle pushing of son jarocho's musical envelope refresh the music for these times.