Accessibility links
A Historic Music Festival Celebrates Cuba's Vast Range : Alt.Latino Never before have so many Cuban artists performed or have been displayed in a single venue in the U.S. 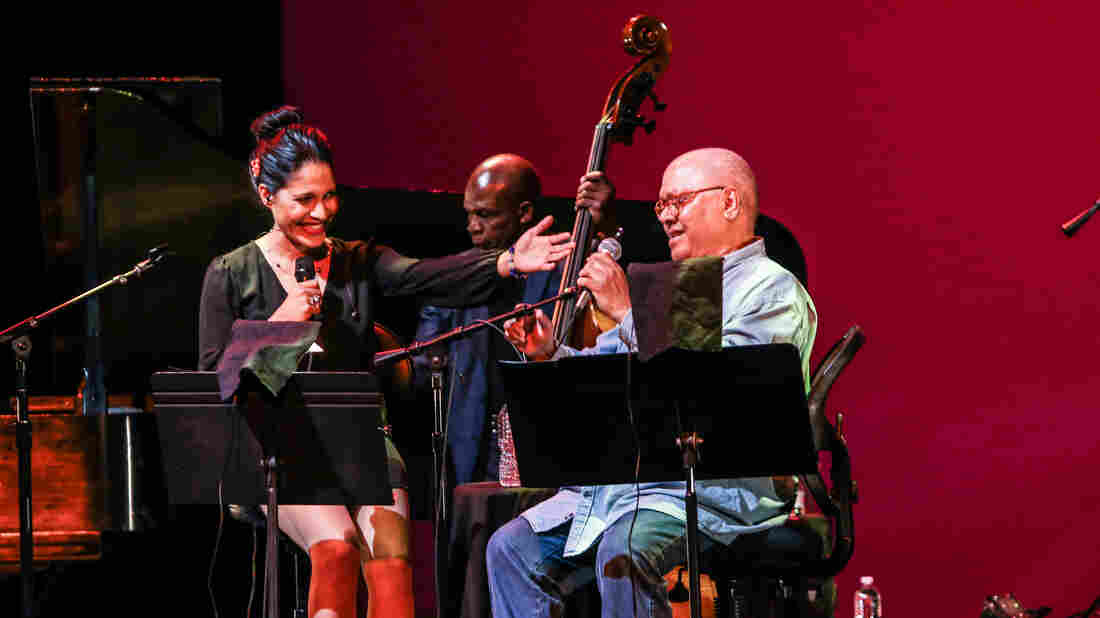 Pablo Milanés (right) and his daughter Haydée Milanés perform together at the Kennedy Center on May 16, 2018. Jati Lindsay/Kennedy Center hide caption 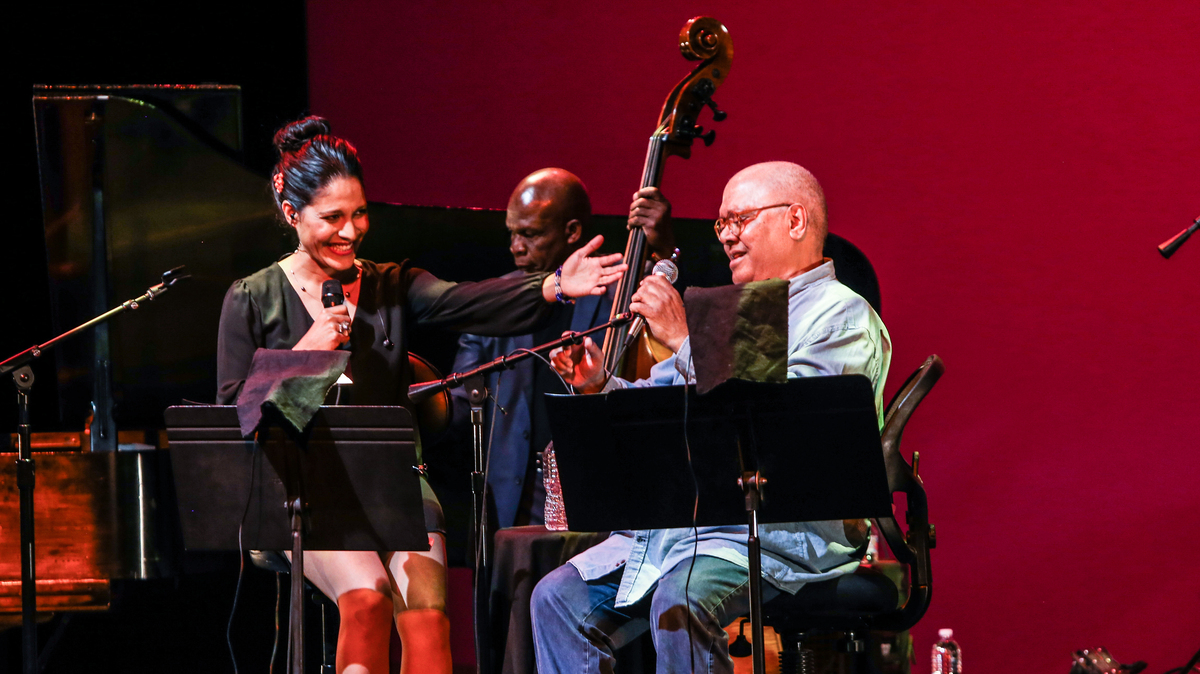 Pablo Milanés (right) and his daughter Haydée Milanés perform together at the Kennedy Center on May 16, 2018.

For two glorious weeks this month, the Kennedy Center for the Performing Arts in Washington, D.C. exploded with the vibrant sound, color and culture of the historic festival Artes de Cuba: From the Island to the World.

It was the Kennedy Center at its best, hosting an unprecedented — literally — array of Cuban arts, with co-curators Alicia Adams and Gilda Almeida building the country's world-class musicians into a cultural bridge between our two nations. The festival was a rare treat for a U.S audience to experience the work of some 400 Cuban and Cuban-American participating artists.

There were fifty events in all, encompassing music, dance, theatre, film, fashion, visual art and more, topped with a series of free evening parties featuring live jams between the visiting musicians. The festival revealed a spectrum of genres-within-genres that celebrated the artistic convergence of Cuba's Spanish, African and indigenous influences, and its long history of musical exchange with the U.S.

While it was impossible to catch it all, here are a few of the concerts that stood out.

Composer and percussionist Yissy García gave a thrilling display of musicianship, as she and her five-piece group Bandancha electrified the audience with a set of complex, contemporary sounds. The young García has emerged as one of Cuba's powerful new female percussionists, landing gigs with the likes of Dave Matthews and Esperanza Spalding. At her performance, García proved to be just as adept at Afro-Cuban rhythms as she is of contemporary jazz, R&B, funk and hip-hop.

"We're happy, happy, happy with what's happening," García said (in Spanish) after the performance, sporting her distinct Mohawk-styled afro, large stars dangling from her ears. "For all the Cuban artists who are able to come here after so much work, everything worked out and it's super wonderful."

García was a sight to behold, drumming like a speeding train headed straight at you. Her high energy playing and rapid-fire rolls seemed effortless, twirling her drumstick like a baton at times as her other hand and her feet banged out beats without even breaking a sweat – all the while exchanging riffs and beaming smiles with her bandmates, who were just as spirited and skilled.

She Cubanized Miles Davis' tune "Tutu," making it her own, while DJ Jigüe added a fascinating electro-hip-hop twist. They ended the show with a somewhat more traditional Afro-Cuban rumba finale she calls "Te Cogió Lo Que Anda," as impressive as it was fun. 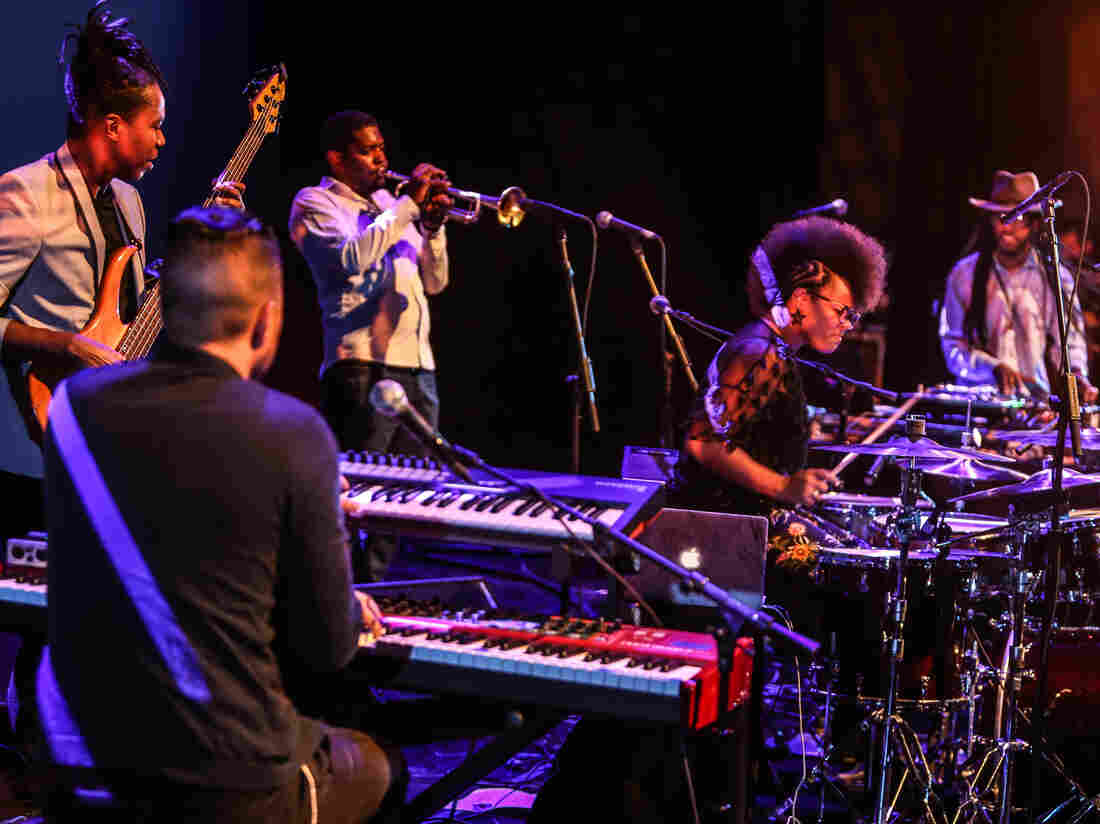 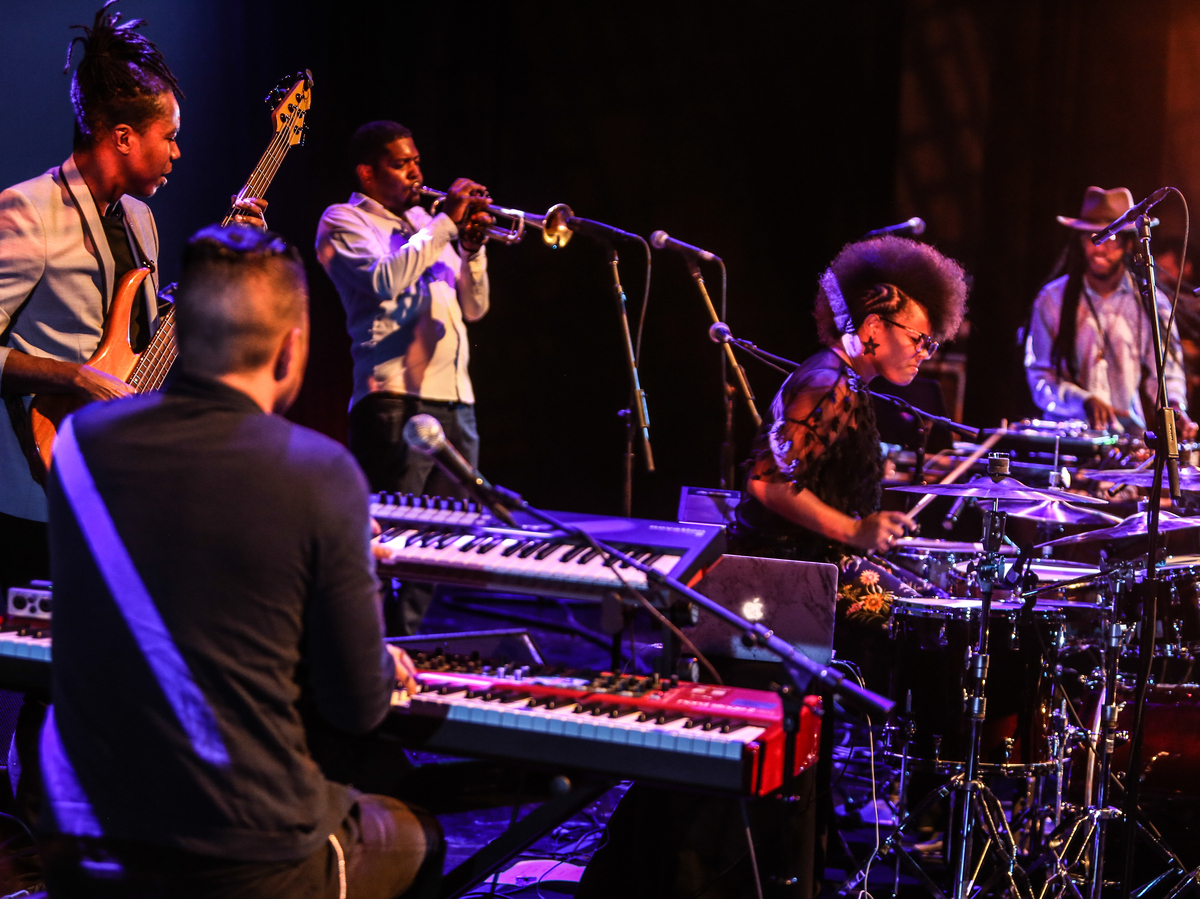 Yissy Garcia y Bandancha perform at the Kennedy Center on May 9, 2018 as part of the Artes de Cuba Festival.

Despite valiant attempts, the legendarily stern Kennedy Center ushers couldn't contain the crowd as Los Van Van, one of Cuba's most popular and prolific bands, fired up its pan-Latin groove machine in the normally staid Eisenhower Theater. The band altered an entire generation of music lovers on the island, fusing Afro-Cuban sounds with the electricity of American rock, pop, funk, soul — which ended up creating a distinct genre called "songo," after the group's 1989 album.

Los Van Van was founded by the late Juan Formell, whose son and percussionist Samuel Formell has now taken the reigns as its director.

"We are anxious," Samuel told me before the show. "We've been practicing our repertoire for months – selecting from 50 years of music – which has been hard to do. Our goal is to make people dance ... We want to bring joy."

The 17-piece band did just that from the very first song, spurring people to dance in their seats before pouring into the aisles. The high-energy front line of three male vocalists, dressed in all-white suits, and a female vocalist, in a contrasting red dress, danced and sang, flanked by a keyboard on each side. Meanwhile a solid horn section, violinists, flutist and a dedicated güiro player swayed from side to side. Smack in center of it all was Formell, at his drum kit and the congas, in a splash of red with his jacket, delivering showmanship and solos both seamless and spectacular.

The group performed a string of hits from each of its decades, starting from Songo. Occasionally shouting out, "Are you tired yet?" in Spanish between songs, their fans invariably returned with: "No!"

Singer and pianist Haydée Milanés gave the most emotionally stirring concert of the festival, accompanied in part by her father, "Pablito" Pablo Milanés, one of Cuba's most beloved singer-songwriters of nueva trova and filin.

Milanés embodied beauty, grace and reverence inside and out, opening her show on piano, singing a tribute to Yemanyá, an Orisha (or deity) from the Yoruba faith, embedded into Cuba by African slaves.

In tribute to the past, she sang "Palabras" by one of her greatest inspirations, Martha Valdés and an homage to her father's legacy. The emotion was palpable as "Pablito" walked onto the stage, sharing his pride at seeing Haydée perform. As they sang together, it was impossible for me not to cry as their sweet voices, gorgeous harmonies, love as familia and artistic passion melded and swirled through the audience in waves. The magic culminated in a stunning duet of the Cuban classic "Yolanda," met with a standing ovation that went on for several minutes.

"It's time for the world to rediscover its roots and musical heritage," the younger Milanés told me, in Spanish, backstage. "I've been adding modern elements to older songs to keep the past present, and take it into the future." After breaking away from her father's shadow and finding her own style, she's now reaching back in order to preserve the past.

"This event is an important exchange — music has the power to unite. It always finds a way. We're all sharing in the same energy. It has a magic higher than politics, religion, anything."