Accessibility links
Mexican-American Duo Jesse & Joy Advocate For Migrants In The U.S. : Alt.Latino The duo's video for the title track of their latest album Un Besito Más depicts a mother and father, who are facing deportation, deciding to leave their child in the U.S. It has millions of views. 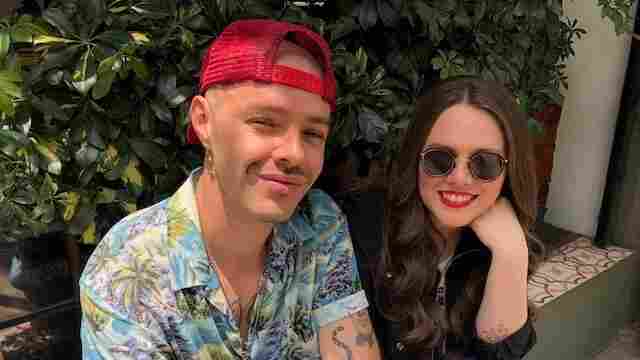 Jesse and Joy Huerta, who make up the Mexican pop duo Jesse & Joy, are considering making English-language albums, and have become vocal advocates for Mexican migrants in the U.S. Carrie Kahn/NPR hide caption 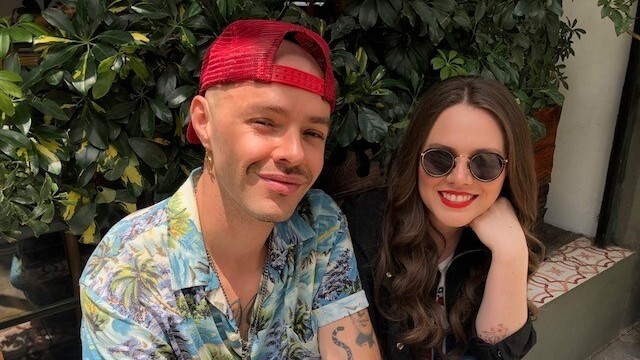 Jesse and Joy Huerta, who make up the Mexican pop duo Jesse & Joy, are considering making English-language albums, and have become vocal advocates for Mexican migrants in the U.S.

Jesse and Joy Huerta of the sibling duo Jesse & Joy have been staples in Latin American pop circles for more than a decade. Jesse, with his trademark wide-brim fedoras and tattoos, plays guitar and piano. Joy brings the melodies and harmonic high notes.

While long-embracing their bicultural heritage, current tensions between the U.S. and Mexico over immigration have compelled the duo to plunge into the debate over migrant families. In making the video for the title track of the pair's Grammy Award-winning album Un Besito Más, Jesse says he and his sister dove deep into the plight of separated families. The song's official video spotlights the struggle of a mother and father facing deportation and their decision to leave their U.S.-born daughter behind.

Jesse says speaking both languages and holding two passports gives them a unique place to speak out for those not as privileged. "Why are we so lucky and blessed enough that we can travel back and forth without exposing our lives?" he asks. "That just made us commit more to it."

Joy hopes their music can change hearts and minds. "I think it's a matter of respect, and if we give people information enough just to respect one another, I think we can help," she says.

The duo's musical success has helped cement them as binational, bilingual advocates, a role Joy tearfully embraced during her acceptance speech at last year's Grammy Awards.

"We are so proud to be Mexican-Americans, so this goes to all the Hispanics out there in this country," Jesse said in the speech. "To every minority group: We are with you. We stand with you."

Though the pair has made a wholesome foray into reggaeton — their remixed single "3 A.M." with Cuba's reggaeton duo Gente de Zona is a hit among fans — Jesse & Joy sometimes strike a chord reminiscent of 1970s brother-and-sister pop icons Donny and Marie Osmond.

That simplicity, often an outlier in today's music scene, is what 22-year-old fan Carla Hernandez Pedraza likes about Jesse & Joy.

"I love the way they are," Pedraza says in Spanish. "They are just really down to Earth, lovely people."

Church factored big in the roots of Jesse and Joy. They learned music by borrowing instruments from their father's evangelical church. And while they started off writing and singing in Spanish, both languages got equal play in their recent hometown concert in Mexico City.

Their father is Mexican, their mother is from Wisconsin, and Joy says she had strict rules: "No Spanglish at home. She's like, 'No, no, no, just stick to one language.' I guess she wanted us to really get both languages separately."

Moving into English language albums would seem like a natural next step for the duo, but like many of their fellow Latin American artists, it's a tough calculation.

"We want to, but we don't want to lose our crowd, you know, our fan base" Joy says. "We don't want them to hate us here," Jesse adds.

While they haven't committed to all-English just yet, Jesse & Joy released several English cuts, including the melodic "Echoes of Love."

But Jesse & Joy shouldn't worry about being labeled a sell-out act. Eighteen-year-old fan Fatima Garcia traveled six hours by bus to get to the Mexico City concert. She says she loves the positive image Jesse & Joy reflect of Mexico and Mexicans these days, especially in the U.S.

"We are all just so proud of them," Garcia says.