Accessibility links
The Best Latin Music Of 2018 : Alt.Latino It's been another watershed year for Latin music. Alt.Latino's Felix Contreras, Stefanie Fernández, Catalina María Johnson and Marisa Arbona-Ruiz round up the year's best. 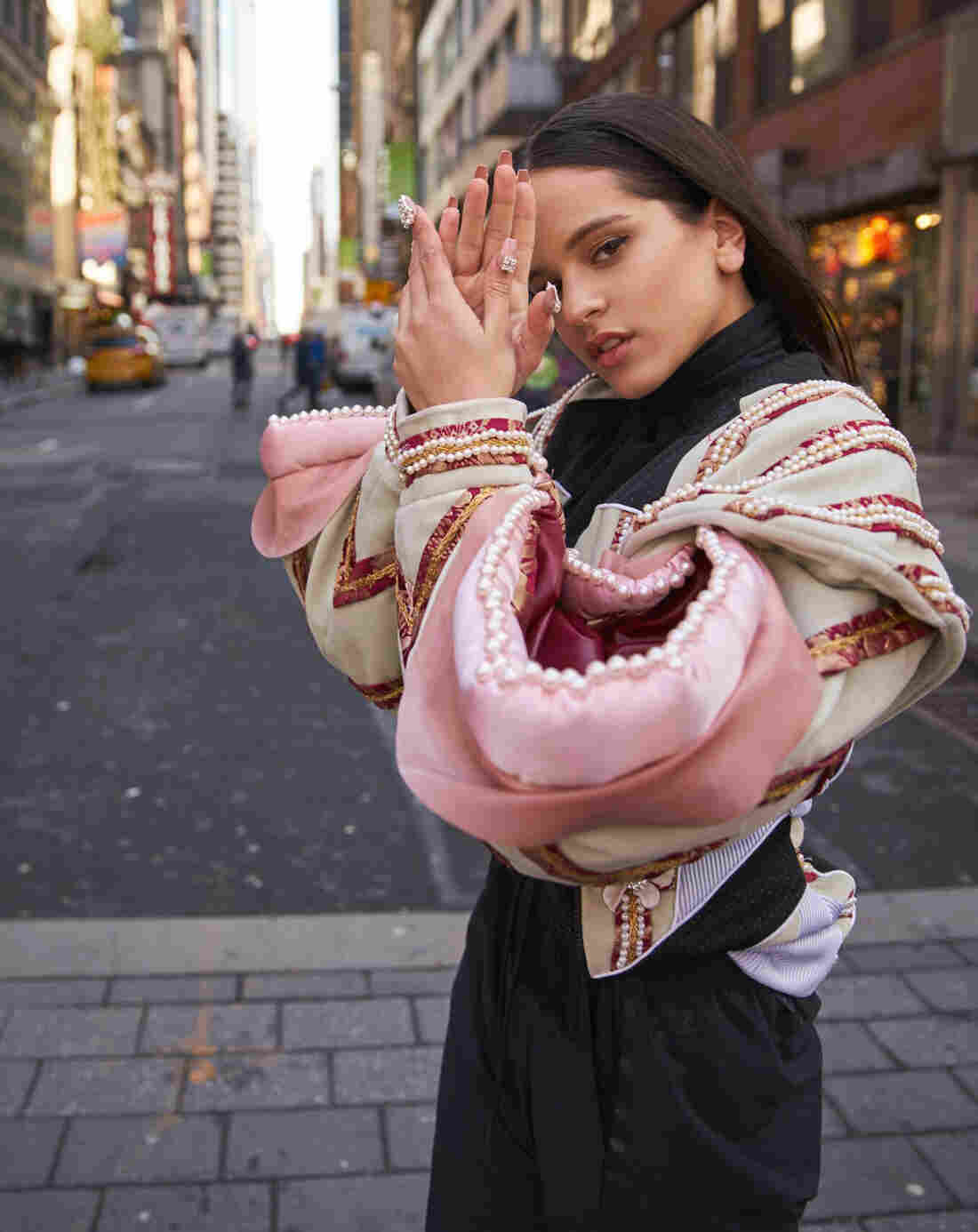 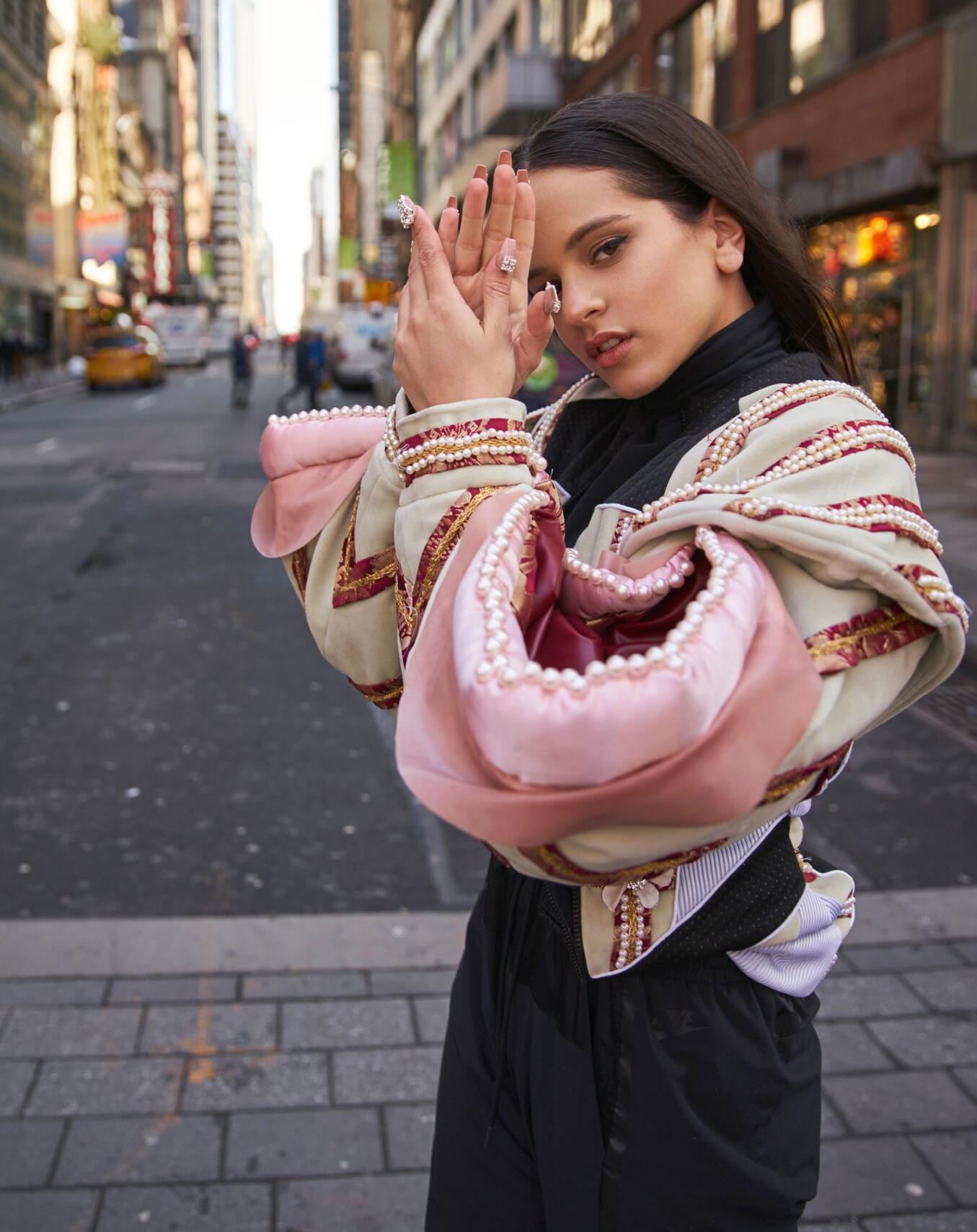 I say this to anyone who will listen: Latin music these days is exploding with so much creativity and inspiration that it is simply overwhelming. Once you get past the billions of views on YouTube of the reggaeton- inspired pop music, you'll find myriad artists who consider their cultural backgrounds a blank canvas on which they express their sense of self and identity.

I did say "overwhelming," so per usual, I called in some help to pick and choose music that best exemplifies 2018: Alt.Latino regulars Stefanie Fernández, Catalina Maria Johnson and Marisa Arbona-Ruiz.

And as always, there's this caveat: There was plenty of great music we did not get a chance to talk about during our hour-long discussion. If you think we missed something essential, let us know via Facebook or Twitter; we may feature your recommendation on a future show.

On This Week's Show

Spanish vocalist Rosalía rose to fame with the surprise album of the year – and our top pick: the intense and complex El Mal Querer (or Bad Love). Her vocal chops unleash whispery warbles and commanding melismas in this flamenco-meets-urban tinged R&B drama. "Malamente" is the first of 11 song chapters telling the tale of a possessive lover. It sizzles. It enraptures. It's experimental gold. —Marisa Arbona-Ruiz

Brooklyn-based Antibalas' singer Amayo (British-born, of Nigerian descent) is featured in this track from an album that brings together Eduardo Cabra Martínez (aka Visitante of currently-on-hiatus Calle 13), Vicente Garcia (the Latin Grammy Best New Artist of 2017) and a series of guests to explore eclectic fusions that blur borders and genres. "Dandy del Congo" connects the dots between Afrobeat, Africa and Afro-Caribbean styles in driving, danceable grooves with Middle-Eastern sonic flairs as the lyrics tout, "We come from the land of colors." Added bonus: The video highlights the suave elegance of the Republic of the Congo's sartorial culture. —Catalina María Johnson

Proof that great doesn't fade. Chicanas were some of the first punks in SoCal and Alice Bag flew that flag high. Her album was a reclamation of punk, this time spiked heavily with maturity and wisdom, but no less loud and dangerous. —Felix Contreras

As a little girl, Amara La Negra performed on Sábado Gigante, where she told NPR she was the only dark-skinned child onstage. Today, she is many non-Latinos' first encounter with Afro-Latinidad, and for the Latino community, a devoted litmus test of our own community's deeply ingrained prejudices. "What A Bam Bam" takes a Sister Nancy dancehall hit as her vehicle for telling the world who she is in full Spanglish and making sure they hear her name — Amara, amar! — loud and clear. —Stefanie Fernández 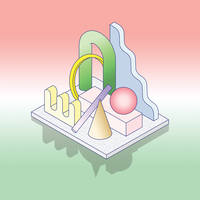 In their album Prisma Tropical, the eclectic band Balún once again transports the imagination with their own brand of music they call "dreambow." It weaves the reggaeton rhythms of dembow to dreamy vocals, traditional and electronic instruments, and pretty much any object they can find that adds textural sound. The track "La Nueva Ciudad" is a sensory journey with a touch of the whimsical. Just close your eyes and see where your mind takes you. —Marisa Arbona-Ruiz

"Nadie lo Riega" is a signature piece by Argentine Pedro Canales, aka DJ producer Chancha Via Circuito. Featuring Patagonian folk icon Miriam Garcia — one of the most renowned practitioners of the ancestral canto con caja (song and hand-held drum) tradition from northwestern Argentina — Canale melds the caja's deep, ancestral beats, Garcia's chants and ambient sound seamlessly in an electronic tapestry that juxtaposes organic and electronic, past and present. In the process, the song transports us to a 21st century dance club in the midst of a mystic locale somewhere between the Amazons and the Andes. —Catalina María Johnson

The Cuban orquesta was an element of Cuban culture relegated forever to the last century, a hallmark of bygone eras of danzones and pure ron de caña. That was until this year, when José "Pepito" Gómez and his band of 16 Cuban, American, and hyphenated musicians revived the old sound of a golden age in Cuban mambo on Daptone's Orquesta Akokán. You can hear the warmth of the room in legendary Areito Studio 101, and it is immortal. —Stefanie Fernández 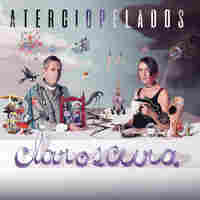 This year saw a handful of genuine pioneers return to form with strong musical statements that did not stare into the rear-view mirror. Aterciopelados' album, Claroscura, made it clear that their music is of this century as well as the last. —Felix Contreras

Not to be dramatic, but Vibras might be the best-produced album of 2018. From the way Carla Morrison's ethereal R&B vocalizations fill the first track and lead seamlessly into the world-dominating "Mi Gente" — which was my musical galaxy brain moment of the year, natch — to a pop-flamenco teaser collaboration with Rosalía on "Brillo," this complex album makes near academic work of previously underestimated urbano genres.

Nowhere is this truer than on "No Es Justo," in which you can (hear me out) actually hear the saltwater that sticks in your hair and the sun setting over you and someone you just met. The distant, lazy strums of a guitar float just beyond reach, the salt on the rim of this unmatched album of the summer. —Stefanie Fernández

Just when you think a great Lila Downs song can't get any better, "Zapata Se Queda" comes along with a stunning stripped-down vocal arrangement of it. La Colmena, the all-women vocal ensemble out of Buenos Aires, Argentina, transforms this homage to Mexican revolutionary Emiliano Zapata into layers of stirring harmonies punctuated by snaps and just enough percussion, both vocal and instrumental. Quoting the lyrics, "¡Ay, mama!" I couldn't stop listening. —Marisa Arbona-Ruiz

Avant-garde artist Mercedes Peon sources the songs, dances, stories and experiences of Galician villages in experimental compositions and "Deixaas" is a classic Peon composition: Polyrhythmic, Celtic-informed melodies and rhythms — this is the music of Galician warrior women armed with tambourines — and melds other elements from the ancestral, female-fronted folk songs of the villages of Northwestern Spain. The tune starts by taking possession of the listener as it layers the sounds of the industrial spaces of her homeland's shipyards with hypnotic, dreamscape vocals courtesy of Ana García Fernández and Monica de Nut. It's a heady, exciting, Bjork-esque mix that merits much repeated listening. —Catalina María Johnson

I don't think I've been remotely disappointed by anything Magos Herrera has done. But this album actually thrilled me because of its ambitious concept and how Herrera's voice is the thread weaving it all together. —Felix Contreras

"Sin Pijama" was the reggaeton monolith of 2018 that got the least attention from the American music media, and that's largely because the mainstream can't compute women in reggaeton that aren't background dancers. Dominican Natti Natasha and Mexican-American Becky G created the most-watched music video by women on YouTube this year. While they certainly aren't the first female pioneers of the genre (Ivy Queen would like to have a word), "Sin Pijama" is a reclamation of power from a very male public face.

The music video says the most: The women are ostensibly at a sleepover that looks way more like a private Victoria's Secret fashion show than any slumber party. In a brilliant twist, the scene fizzles out to show the two in face masks and eating junk food, the real women behind the male fantasy. —Stefanie Fernández

Chilean-born Mon Laferte is like an ever-unfolding rose whose bloom keeps getting brighter. Inside every petal, a new sound explored. Inside every song, a deeper depth of emotive color and magic. After singles "Antes De Ti" and "Asilo" with Jorge Drexler, the consummate entertainer boldly recorded an entire album of bolero, pop and mambo in one take, old-style. I love this rap-infused "El Mambo" from Norma. —Marisa Arbona-Ruiz

This delightful gem of an album focuses on the music of emblematically Dominican bachata via the Haitian diaspora found on that side of the island. Sung in Creole and Spanish, Bachata Haiti unites guitar maestro Joan Soriano with a masterful roster of Haitian-Dominican artists including Franklin Medina, "El Zorro Negro." A lovely dialogue is created between the sensual lolls of bachata's guitar twangs (this is, after all, once-stigmatized music, at one time relegated to bordellos) and the tight, lilting and soulful harmonies of Haitian creole kompa music. "Ti Pouchon" reveals the endless riches of the African roots that nurtured American blues, Dominican bachata and Haitian kompa. —Catalina María Johnson

Alejandro Escovedo is still punk, still loud and still so very vital. The Crossing is one of his best records ever for a lot of reasons, but mainly because it captures the essence of the vision he has carried since his earliest days making music. —Felix Contreras

In response to the President, to FEMA, and fatalistic news media, Bad Bunny refused to let his people remain cast in tragedy. The lights may have been out for months, but Bad Bunny, with characteristic Boricua pride, chose to celebrate the unextinguished joy of Puerto Rico while still elevating the plight of their reconstruction. "Estamos Bien" showed the world that even while recovering from its worst natural disaster in history, the island once again produced some of the best music of 2018. —Stefanie Fernández

This year my life was made greater by all the fabulous music coming out of Cuba, and among her extraordinary talent is emerging pianist Harold López-Nussa. Un Dia Cualquiera is a sparkling celebration of contemporary jazz with a smoldering Cubano infusion. The track "Hialeah," accompanied by his brother Ruy Adrián López-Nussa on drums and Gaston Joya on bass, is at once exciting and sublime, bursting with passion, energy and joy. —Marisa Arbona-Ruiz

NYC's M.A.K.U. SoundSystem released the video for "Por Encima" on May 17, the International Day against Homophobia, Transphobia and Biphobia as the first single off of 5 Fuegos, the quintet's latest EP. The song speaks of taking flight without fear as the potent vocals of lead singer Liliana Conde soar anthemic above Afro Colombian-influenced guitar riffs. She chants, "There's no one who can trip me. / I go above them / Spread your wings / I'll light a candle" as the video's protagonists (including members of Colombian coastal city Santa Marta's LGBTQ community) tirelessly traverse difficult terrains to reach their destination. —Catalina María Johnson

This is what the music for West Side Story should have sounded like, sparkling with the music of El Barrio. Bandleader, educator and drummer Bobby Sanabria and his crew hit the nail on the head so perfectly that he got buy-in from original composer Leonard Bernstein's family. That's how good this album is. —Felix Contreras