November 30, 2010 • WikiLeaks, and its founder Julian Assange, have touted the organization as promoting transparency, but Heather Hurlburt of The New Republic says this latest leak might have the opposite effect. It will make declassifying information more difficult.

November 30, 2010 • When WikiLeaks announced it would release information concerning Russia, journalists thought they might finally get answers to their burning questions. How is power distributed in the Kremlin? How much money does Putin have? Instead, Julia Ioffe of Foreign Policy says, all they found out is that President Medvedev plays Robin to Prime Minister Putin's Batman. And everyone knew that.

November 27, 2010 • This week North Korea fired artillery shells at a South Korean island, setting off a diplomatic crisis. James Fallows, national correspondent for The Atlantic, joins guest host Audie Cornish to talk about how China's role in North Korea will complicate the diplomatic picture. They also talk about this week's decision by the Department of Homeland Security to do away with color-coded terror threats.

November 26, 2010 • In our political roundtable this week, guest host Mary Louise Kelly speaks with E.J. Dionne of The Washington Post and Matthew Continetti of the Weekly Standard about how Washington should respond to bellicose North Korea. They also look ahead to how the lame duck session is shaping up in Congress.

'Shop Talk': Michael Vick's Comeback Is One For The Books

November 26, 2010 • The one year anniversary of the Tiger Woods sex scandal, the comeback of disgraced football star Michael Vick, and rap mogul Jay-Z's new book are some of the topics under discussion in Tell Me More's weekly segment, The Barbershop. In the chairs, along with host Allison Keyes, is author Jimi Izrael, civil rights attorney Arsalan Iftikhar, NPR National Correspondent Corey Dade and Dave Zirin, Sports Editor for "The Nation" and at EdgeofSports.com.

'Shop Talk': Michael Vick's Comeback Is One For The Books

Where's The Diversity Among Oscar Hopefuls?

November 26, 2010 • The holidays are high season for Hollywood. It's when movie studios release some of their best offerings in the hope of scoring big profits and maybe an Oscar nomination or two. The new crop of movies feature diverse plot lines, but some critics say there's almost no ethnic diversity. Host Allison Keyes talks diversity in film with The San Francisco Chronicle's "Asian Pop" columnist Jeff Yang and "3 Black Chicks.com" Editor-in-Chief and writer Kamal Larsuel.

Where's The Diversity Among Oscar Hopefuls? 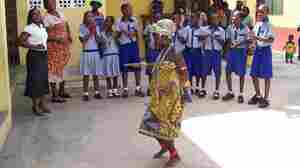 Embracing The African In African-American

November 24, 2010 • Guest blogger Malik Washington recently returned from Ghana and is reminded how some African-Americans don't see themselves as African.

November 24, 2010 • News of North Korea's latest nuclear stunt has launched debate about the mindset of country's leader, Kim Jong Il, once again. David Rothkopf of Foreign Policy argues that what the rest of the world sees as strange behavior from the ruler has actually been a winning strategy.

November 23, 2010 • The holiday season is almost upon us and for many Americans that means it's time to go shopping! But with the sluggish economy, the risk of over-spending on gifts is a big concern for many people. Host Allison Keyes gets some tips on how to make the holiday special without breaking the bank, from regular Tell Me More contributor and personal finance expert Alvin Hall and Washington Post personal finance reporter Nancy Trejos.

November 23, 2010 • Thursday, the day before Thanksgiving, is the busiest travel day of the year. Travelers this year are bracing for stringent new security measures at airports. But for many passengers, particularly those of color, the humiliation suffered from intrusive pat-downs or full body scans is not unfamiliar. Host Allison Keyes speaks with Zahra Billoo who is the Executive Director of the San Francisco Bay Area chapter of CAIR or the Council on American-Islamic Relations. Also joining the discussion is Dr. Carl Bell who is President and C0EO of the Community Mental Health Council. 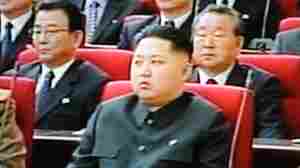 Analysis: For North Korea, Timing Is Everything

November 23, 2010 • North Korea's most recent provocations include shelling a South Korean island and showing off the regime's latest nuclear facility. The question isn't so much why, but why now?

November 23, 2010 • The New START treaty is facing what could be its demise in Congress. Stephen M. Walt of Foreign Policy argues that the GOP is blocking the treaty only to obstruct the Obama administration, and is not thinking about the safety and security of the U.S.

The Root: Who Will Be The Next Black Senator

November 22, 2010 • Roland Burris, the outgoing senator from Illinois, made his final speech on the floor of the senate last week. In it he pointed out that upon his exit, the Senate would be without a single African-American member. Lenny McAllister of The Root argues that it is important for blacks in America to see themselves represented at all of the highest levels of government.

November 22, 2010 • Even in a time of great austerity, British citizens seem to be excited about the upcoming royal wedding. Alex Massie of Foreign Policy argues that perhaps America, struggling with its polarizing politicians, needs a unifying royal family.