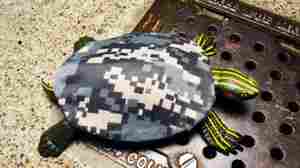 Urban Camouflage for Reptiles: "I basically thought about how turtles have camouflage that doesn't really work very well for them in the urban environments they often live in these days," Keats said. "So my thought was, can we go to our military and look at urban warfare as inspiration." Jonathon Keats hide caption

March 31, 2017 • Artist and philosopher Jonathon Keats didn't need to create anything new to show the absurdity of human problem-solving. All he had to do was give human technology to animals.

March 31, 2017 • The sculpture, "Fearless Girl," was welcomed to her perch in lower Manhattan, facing down the famous "Charging Bull" sculpture, with much fanfare. Now her lease has been extended and feelings are mixed. 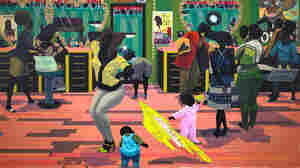 Kerry James Marshall: A Black Presence In The Art World Is 'Not Negotiable'

March 28, 2017 • For decades, the 61-year-old artist has depicted black lives on canvas. He says inclusion in museums must not be contingent on "whether somebody likes you ... or somebody's being generous to you."

Kerry James Marshall: A Black Presence In The Art World Is 'Not Negotiable' 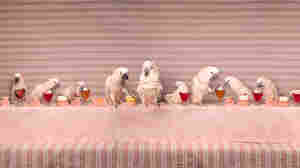 March 26, 2017 • Looking at Claire Rosen's photographs can feel like walking into someone else's dreams. In her new book Imaginarium she provides inspiration and advice for curating a creative life. 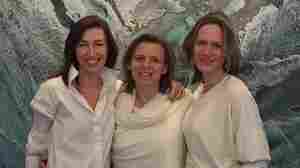 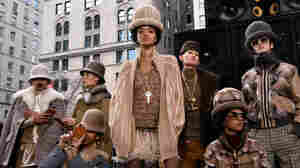 Models pose at the end of the Marc Jacobs Runway Show at Park Avenue Armory on February 16, 2017 in New York City. In the past, Jacobs has been criticized for culturally insensitive runway shows. This year marked a change. Peter White/Getty Images hide caption

On Fashion Runways, Inclusion Is About More Than Color

March 21, 2017 • It's a tricky thing, casting. Directors have a vision for their lines — but what if that vision doesn't include a more inclusive palette? 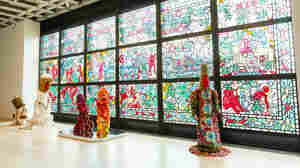 Raúl De Nieves' billboard-size Biennial contribution, beginning & the end neither & the otherwise betwixt & between the end is the beginning & the end, is made from everyday material like tape, paper, glue and beads. Matthew Carasella/Courtesy of The Whitney Museum hide caption

March 18, 2017 • There are 63 artists in this year's Biennial, including An-My Lê, whose photography touches on immigration, and Raúl de Nieves, who made a stained glass window with tape, paper, beads and more. 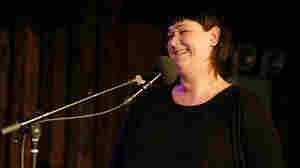 Autumn Stanford on Ask Me Another. Mike Katzif/NPR hide caption

March 17, 2017 • This episode's Mystery Guest, Autumn Stanford, just started an interesting late-night business. Can you figure out what it is before Ophira and Jonathan?

March 16, 2017 • Vietnamese American photographer An-My Le is one of 63 artists selected for this year's Whitney Biennial. Her new work was shot in Louisiana. 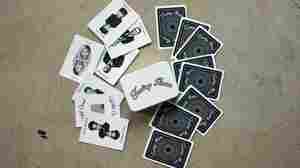 Trading Races, a new game by Kenyatta Forbes, asks players to talk about what it means to be black. @bgrzb hide caption 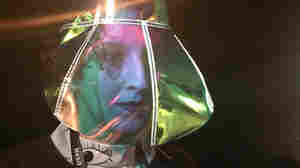 Carmen Aguilar y Wedge is the co-founder and director of creative technology for Hyphen-Labs. She modeled the company's ScatterViz visor at the Sundance Film Festival in January. Nina Gregory/NPR hide caption

March 13, 2017 • Hyphen-Labs is a group of women of color who are scientists, engineers, architects and designers who have designed clothing that camouflages against facial recognition software. 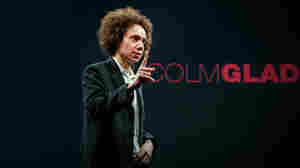 March 10, 2017 • We assume that our choices come with prepackaged consequences. But author Malcolm Gladwell explains how we aren't simply passive recipients of our decisions. 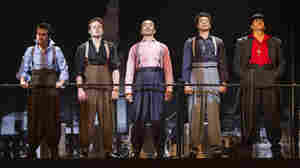 In the revival of Luis Valdez's "Zoot Suit," young pachucos go on trial for a murder they did not commit. In this scene, the judge requires the men to go on trial in the clothes they were wearing when they were arrested. Craig Schwartz hide caption

March 9, 2017 • The revival of playwright Luis Valdez's "Zoot Suit" reminds us that clothes and garments have long been the site upon which bigots can project their prejudices and fears. 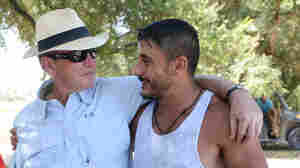 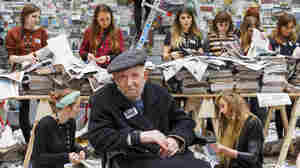 Students from Central Saint Martins art school in London work behind Gustav Metzger, after his worldwide call for a Day of Action to Remember Nature in 2015. Tristan Fewings/Getty Images for Serpentine Gall hide caption

Gustav Metzger, Whose Creations Were Works Of Destruction, Dies At 90

March 3, 2017 • The artist, who lost most of his family to the Holocaust when he was young, founded the auto-destructive art movement. He explored how destruction could become an act of creation and dissent.