October 30, 2009 • American pork producers say China's decision to lift a ban on U.S. pork imports comes at a critical time. The industry is struggling because of fears over swine flu. China imposed the ban on U.S. pork five months ago following the outbreak of the H1N1 flu virus. The disease cannot be caught by eating pork.

October 28, 2009 • A deadly car bomb exploded Wednesday in Peshawar, Pakistan, as Secretary of State Hillary Clinton arrived in the capital, Islamabad, about 100 miles away. She hopes to build and repair fragile relations with a country seen as a critical U.S. ally in the fight against Islamist extremism. 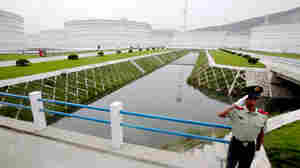 China Spends Billions In A Global Spree For Oil

October 27, 2009 • The global recession appears to have accelerated a shift in China's growing role in world energy markets. China has taken advantage of low prices to snap up energy resources around the planet and ensure future economic growth. So far this year, China has purchased an estimated $15 billion in oil and gas supplies worldwide, already double last year's figure.

China Spends Billions In A Global Spree For Oil

October 27, 2009 • Between 2004 and 2007, an estimated 100,000 homes in more than 20 states were built with toxic drywall imported from China. It's being called a "silent hurricane" because emissions from the drywall destroy plumbing and electrical systems. The Gonzalez family moved out of their home because of drywall problems. 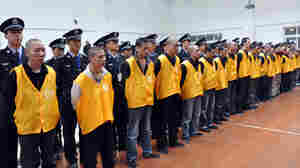 Defendants face sentencing for a variety of charges linked to organized crime, including murder and extortion, during a trial in southwest China's Chongqing municipality on Oct. 21. The government's largest anti-organized crime prosecution in a half-century is currently under way. Already, six people have been sentenced to death. AFP/Getty Images hide caption

China Cracks Down On Organized Crime

October 26, 2009 • One of the country's biggest prosecutions of organized crime in the past half-century is under way in southwest China. A millionaire businessman and former legislator is currently on trial in Chongqing. Already, six people have been sentenced to death and more than 1,500 have been arrested.

China Cracks Down On Organized Crime

October 23, 2009 • One of the world's most intense rivalries is between two Asian giants: China and India. Relations between them are strained at the moment, and one reason involves the Dalai Lama. He plans to visit an area in northeast India next month that China has claimed as its own for many years. 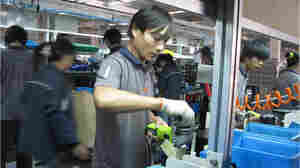 The Positec power-tool factory in Suzhou Industrial Park — about 50 miles outside Shanghai — is suffering a worker shortage; it lacks about 200 employees, or about 10 percent of the workforce. In an effort to attract workers, the factory has increased wages by 10 percent and is building new dorms and a canteen. Louisa Lim/NPR hide caption

China's Economy Grows, But Can It Last?

China's Economy Grows, But Can It Last? 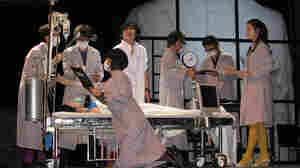 Meng Jinghui is China's leading avant-garde theater director. His latest work, Murder in the Hanging Garden, is a musical — his first — and it addresses "the relentless grabbing for material goods and people's spiritual loss." Louisa Lim/NPR hide caption

October 21, 2009 • Meng Jinghui is China's most avant-garde theater director: One of his plays focuses on the obsessive love of a rhino keeper. Now, he takes a stab at reinventing the musical with a story that deals with murder, death and "people collapsing in this ridiculous society."

October 21, 2009 • The U.S. and Afghanistan are encouraging China to take a greater role in helping to solve Afghanistan's problems. China has become a major commercial investor in Afghanistan. But a common criticism is that while U.S. troops risk their lives in Afghanistan, it is Chinese companies that reap the economic benefits.

Making 'Made In China' Mean Luxury

October 17, 2009 • Trade giant China remains dominant in the making and selling of so-called cheap items such as toys and clothing, even during the current global recession. But China aspires to compete with other countries in the trade of luxury items as well. Host Scott Simon talks with Nicholas Lardy, a senior fellow at the Peterson Institute for International Economics, a non-profit, non-partisan group based in Washington, D.C.

Making 'Made In China' Mean Luxury 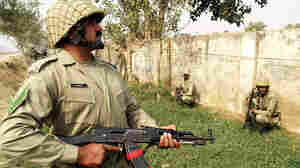 Is Pakistan's Nuclear Arsenal At Risk?

October 16, 2009 • Pakistan is believed to have at least 60 nuclear weapons, and the country's leaders say security measures protecting them are "foolproof." But recent terrorist attacks against a Pakistani police post and the army's headquarters have raised serious questions about that security.

Is Pakistan's Nuclear Arsenal At Risk? 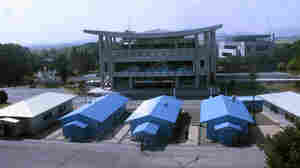 October 16, 2009 • The chasm between North Korea and the United States sometimes seems insurmountable, especially on questions of history — and the way it's portrayed in North Korean propaganda. In the U.S., the Korean War is known as the Forgotten War; in Pyongyang, it is the Victorious Fatherland Liberation War.

October 15, 2009 • The wave of recent terrorist attacks across Pakistan — including simultaneous strikes Thursday in Lahore, killing dozens — reveals a militancy that may be more robust than authorities previously thought. Analysts say it is a test of wills between Pakistan's security forces and the Taliban.

For Chinese Man, A Gut Instinct For Belly Dancing

October 13, 2009 • Mostly women — and an occasional man — each pay more than $750 a year to learn how to twirl and undulate their exposed midriffs at Chinese Celebrity Guo Wei Belly Dancing Club. The proprietor, Guo Wei, learned the art of belly dancing in Cairo, Egypt, and he now teaches classes in China and appears on TV.

For Chinese Man, A Gut Instinct For Belly Dancing