November 30, 2019 • The deaths of singers Sulli and Goo Hara within weeks of each other are putting a spotlight on mental health, cyberbullying and social issues in South Korea.

Dozens Of Protesters Shot And Killed By Iraqi Security Forces

November 29, 2019 • Thursday was among the bloodiest days since protests resumed last month. More than 300 have been killed in that span. NPR's Steve Inskeep speaks to New York Times Baghdad bureau chief Alissa Rubin.

Dozens Of Protesters Shot And Killed By Iraqi Security Forces

November 29, 2019 • The president signed a law supporting the protesters and ordering sanctions for human rights violations. Kevin Lam, a pro-democracy activist elected to the district council, details reactions there.

November 29, 2019 • President Trump made a surprise visit to troops in Afghanistan on Thanksgiving Day, announcing that he believes the Taliban wants a cease-fire and that he is restarting peace talks with the group.

November 28, 2019 • President Trump has signed into law a bill that supports pro-democracy protesters in Hong Kong. How's this being viewed in mainland China? NPR's Steve Inskeep talks to David Rennie of The Economist. 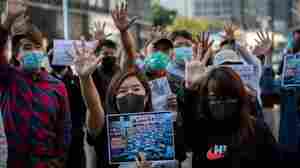 People gather in support of pro-democracy protesters during a lunch break rally in the Kwun Tong area in Hong Kong on Wednesday. Hong Kong has been battered by months of mass rallies and violent clashes between police and protesters who are demanding direct popular elections of the semi-autonomous Chinese territory's government, as well as an investigation into alleged police brutality. Nicolas Asfouri/AFP via Getty Images hide caption

November 28, 2019 • China summoned the U.S. ambassador and issued a sharp response over the legislation, which allows the U.S. to sanction individuals who violate Hong Kong residents' rights.

November 26, 2019 • NPR's Ailsa Chang talks with Bethany Allen-Ebrahimian of the International Consortium of Investigative Journalists about documents that detail how China has tracked and detained Uighur communities. 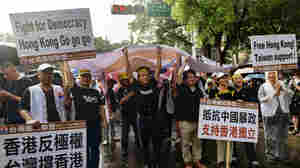 November 26, 2019 • The arrival of several Hong Kong protesters has revived debate over whether Taiwan can or should accept Chinese citizens seeking safety. Taiwan has no asylum laws and attempts to pass one have failed. 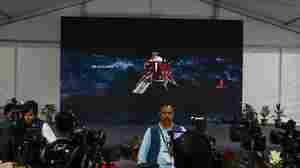 An illustration of the landing craft stands behind members of the media at an Indian Space Research Organisation facility this year in Bangalore, India. Authorities initially chalked up the failed landing in September to a loss of communication with the craft; last week, they revealed what happened to it. Manjunath Kiran/AFP via Getty Images hide caption

November 26, 2019 • The robotic Vikram craft would have made India the fourth country to successfully land on the moon. Instead, contact was lost — and now, authorities have formally acknowledged it crashed.

November 26, 2019 • NPR's Steve Inskeep talks New York Times reporter Jamie Tarabay, who's based in Sidney, about an alleged plot by a Chinese espionage ring to install an agent for Beijing in Australia's parliament.

November 25, 2019 • One of the most sensitive issues in Taiwan right now is accepting protesters from Hong Kong seeking asylum in Taiwan. But Taiwan has no asylum laws, and many argue the island isn't ready. 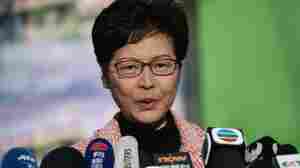 Hong Kong Chief Executive Carrie Lam addresses the media after casting her vote during Sunday's district council elections. After results showed a landslide victory for pro-democracy candidates, Lam said she would listen "humbly" to the will of the voters. Ye Aung Thu/AFP via Getty Images hide caption

November 25, 2019 • While Chief Executive Carrie Lam vowed to listen "humbly" to voters, her backers in Beijing broadcast defiance. The election gave protesters a symbolic win, but its tangible impact remains in doubt.