February 26, 2010 • There were more arrests in Turkey in the long-running investigation into an alleged conspiracy to destabilize and eventually overthrow the civilian government. The developments have heightened tensions between the conservative Muslim leaders of the government and the Turkish military command, which has long seen itself as the guardian of the country's secular constitution.

February 25, 2010 • The Toyota scandal is being watched in Japan — especially testimony by the automaker's president Akio Toyoda in a Congressional hearing on Wednesday. Toyoda's grandfather founded the company. Harumi Ozawa, a reporter with AFP, tells Steve Inskeep that the Japanese public seems to be behind Toyoda because his actions seem sincere.

February 24, 2010 • Akio Toyoda, grandson of the founder of the world's largest automaker, apologizes before a House panel investigating deadly flaws that sparked the recall of 8.5 million vehicles. The chairman of the House Committee on Oversight and Government Reform says blame must be shared by both Toyota and U.S. safety regulators. 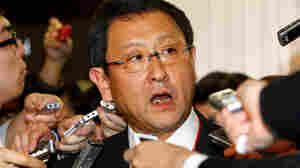 Toyota President and CEO Akio Toyoda speaks to reporters after meeting with Japan's Transport Minister Seiji Maehara in Tokyo on Feb. 9. Earlier that day, Toyota announced a recall of about 437,000 Prius and other hybrid vehicles worldwide to fix brake problems, the latest in a string of embarrassing safety lapses at the world's largest automaker. Shizuo Kambayashi/AP hide caption

February 24, 2010 • Once seen as a trailblazer whose management techniques, known as the Toyota Way, were a model for others, Toyota has since fallen on tough times — most recently, a recall of 8.5 million vehicles. Its deep problems are ushering a period of soul-searching in corporate Japan. 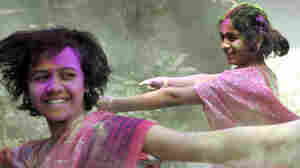 February 23, 2010 • Colorful, sweet and savory Indian treats are a natural when it's time to celebrate the coming of spring. That's what the Hindu holiday of Holi — or the Festival of Colors — is all about. The day calls for bright curries, sweet and savory rice, a mango cannoli, and a special carrot juice. 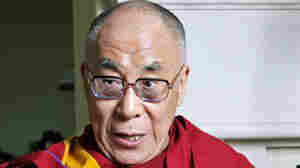 The Dalai Lama during a visit to Southern California on Saturday. The exiled Tibetan spiritual leader is visiting the U.S. and met last week with President Obama. Reed Saxon/AP hide caption

February 22, 2010 • Though many around the world revere him, Chinese officials regard the Dalai Lama as a separatist. But the exiled Tibetan spiritual leader says he is committed to the promotion of human value and religious harmony. He shared this and other views with NPR's Renee Montagne on Saturday.

February 19, 2010 • China's recent disputes with the United States have prompted Beijing to cool efforts at military cooperation between the two countries. But in the long term, Chinese leaders apparently recognize the value of regular military-to-military ties. 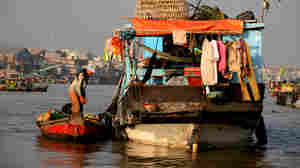 A woman stands in front of a houseboat moored near a floating market in Chau Doc, in southern Vietnam near the border with Cambodia. Christopher Brown for NPR hide caption

The Mekong: A River And A Region Transformed

As Mekong Rolls To The Sea, Turbulence On Its Banks

February 19, 2010 • The Mekong River is known as the Cuu Long, or Nine Dragons, in Vietnam, where the waterway splits and flows into the South China Sea. In the Mekong Delta, an economic boom has brought abundance for some, poverty for others, and worries about threats to the river.

As Mekong Rolls To The Sea, Turbulence On Its Banks

Who Was Behind Attacks On Google?

February 19, 2010 • A series of online attacks on Google and other large U.S. companies had been traced back to two Chinese educational institutions, but it's unclear if the hackers are tied to the Chinese government. New York Times reporter John Markoff discusses the origin of the attacks.

Who Was Behind Attacks On Google?

February 18, 2010 • In recent months, China has cut back on its stockpile of U.S. government debt. China is now the second-largest holder of U.S. Treasuries, behind Japan.

February 18, 2010 • President Obama met Thursday with Tibet's spiritual leader, the Dalai Lama. China has criticized the meeting because it regards the Dalai Lama as a separatist leader. Robbie Barnett, director of Modern Tibetan Studies at Columbia University, says the meeting is more significant than previous presidential meetings with the Dalai Lama because it came amid increased Chinese rhetoric. 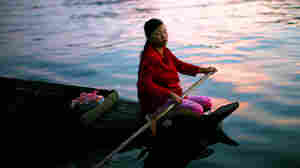 The Mekong: A River And A Region Transformed

Cambodia's Fortunes Ebb And Flow Along The Mekong

February 18, 2010 • Cambodia is one of the poorest countries in Asia. But it hasn't always been that way, and the Mekong River has been key to its periods of prosperity. Recovering from 20th century atrocities, the country now faces a new danger: Development is putting the river and its fish at risk.

Cambodia's Fortunes Ebb And Flow Along The Mekong

February 18, 2010 • GM and its partner manufacture the Wuling Sunshine, a $5,000 minivan, in China. But there is little hope such an inexpensive mode of transportation would sell in the U.S. without fancy options and basic safety features like air bags.

February 18, 2010 • A lawyer involved in anti-mob trials in southwestern China found himself on trial, accused of falsifying evidence. Many Chinese lawyers see the case as an assault on their profession, and the case has sparked a nationwide debate about due process.