September 30, 2009 • Many factors can determine whether a tsunami is generated — one being earthquake power. Below, a look at how three significant underwater temblors stack up against each other in power.

September 30, 2009 • A U.S. aid package would give Pakistan $7.5 billion over the next five years. Husain Haqqani, the Pakistani envoy to the U.S., says that while conditions placed on the package have upset Pakistanis, many of the concerns will go away once the two countries build trust. 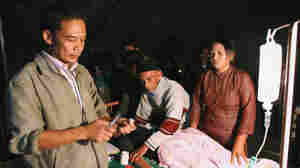 September 30, 2009 • The underwater temblor, which had a preliminary magnitude of 7.6, collapsed buildings in the coastal city of Padang, in Southern Sumatra province and briefly triggered a tsunami alert. Indonesian officials said at least 200 people were killed.

September 29, 2009 • The Obama administration is trying something new to influence the military junta of Myanmar — talking to the country's rulers. A top U.S. official said that he's planning to start a sustained dialogue while keeping sanctions in place.

September 28, 2009 • Jon Huntsman, the new U.S. ambassador to China, tells NPR he is "working very closely" with China regarding Beijing's response to Iran's expanding nuclear and missile programs. He says the next few days and weeks will be very important. China's support is seen as vital to a coordinated international effort on Iran. 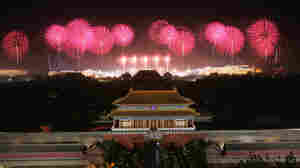 Fireworks explode over Beijing's Tiananmen Square on Sept. 12 during rehearsals for massive National Day celebrations to be held Oct. 1. This year marks the 60th anniversary of the founding of the People's Republic of China. Imaginechina via AP hide caption

September 28, 2009 • It's hard to imagine a bigger or more highly choreographed spectacle than last year's Olympics in Beijing. But in some ways, China is trying to outdo itself with its 60th celebration of the founding of the People's Republic. Although this time, the event is aimed at the domestic audience.

September 27, 2009 • China currently produces more CO2 than any other country in the world, but it's also poised to be the next leader in green technology. Host Liane Hansen talks to Barbara Finamore, founder and director of the China program at the National Resources Defense Council about China's green initiatives and how they compare to what's happening in the U.S.

September 25, 2009 • While many believe China is well on its way to becoming the world's No. 1 engine of economic growth, Stephen Roach, chairman of Morgan Stanley Asia, argues it won't happen quickly.

In India, Many Small Steps To Combat Big Problem

September 23, 2009 • The Indian government is resisting global pressure to cut carbon emissions to combat climate change. But in India's rural areas, such as one village in Gujarat state, remedies ranging from individual solar-powered stoves and a 30-foot-high windmill are already being explored.

In India, Many Small Steps To Combat Big Problem

Myanmar At U.N. For The First Time In 14 Years

September 23, 2009 • Myanmar's prime minister is among those attending this week's United Nation's General Assembly meeting in New York. His visit comes as the U.S. reviews its policy toward Myanmar — a fact not lost on the country's military leaders. The prime minister is the first senior member of Myanmar's military to attend the annual gathering in 14 years.

Myanmar At U.N. For The First Time In 14 Years

September 23, 2009 • The special meeting on climate at the United Nations Tuesday produced strong rhetoric, but no breakthroughs. U.N. Secretary General Ban Ki-moon called the meeting in advance of a December deadline. That's when talks in Copenhagen are supposed to produce a new treaty to reduce emissions of greenhouse gases.

September 22, 2009 • President Obama and Chinese President Hu Jintao meet in New York Tuesday in an attempt to prevent a major trade war. Tensions have mounted over stiff import duties the U.S. slapped on Chinese tires more than a week ago. The Chinese fear other countries will follow the U.S. lead.

China, U.S. At Odds Over Tariffs

September 18, 2009 • A possible trade war is brewing between the U.S. and China after the two countries imposed tit-for-tat tariffs on each other.

China, U.S. At Odds Over Tariffs 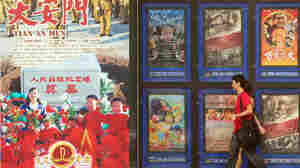 People in Beijing walk past a poster for the film The Founding of A Republic on Wednesday, a day ahead of the film's opening. The star-studded movie — set from 1945 at the end of the Second Sino-Japanese War, to the 1949 founding of the People's Republic of China — is part of celebrations marking 60 years of Communist Party rule. Frederic J. Brown/AFP/Getty Images hide caption

Chinese Moviegoers Get A Blockbuster, With A Spin

September 17, 2009 • The Founding of a Republic, an epic, star-studded movie, is a centerpiece of the propaganda strategy ahead of the 60th anniversary of the founding of the People's Republic of China. But it contains some interesting ideological spin on history.

Chinese Moviegoers Get A Blockbuster, With A Spin

September 16, 2009 • A three-page draft document from the Obama administration lays out broad goals, which include increasing Pakistan's counterinsurgency capabilities and strengthening Afghan security forces. The metrics, however, are mostly subjective, and it is unclear whether they will satisfy those calling for specific benchmarks to measure progress.