Accessibility links
A Frightening Delivery, And A Healthy Baby Girl : The Baby Project After a frightening delivery, Loriani Eckerle gives birth to a healthy baby girl.

A Frightening Delivery, And A Healthy Baby Girl

A Frightening Delivery, And A Healthy Baby Girl 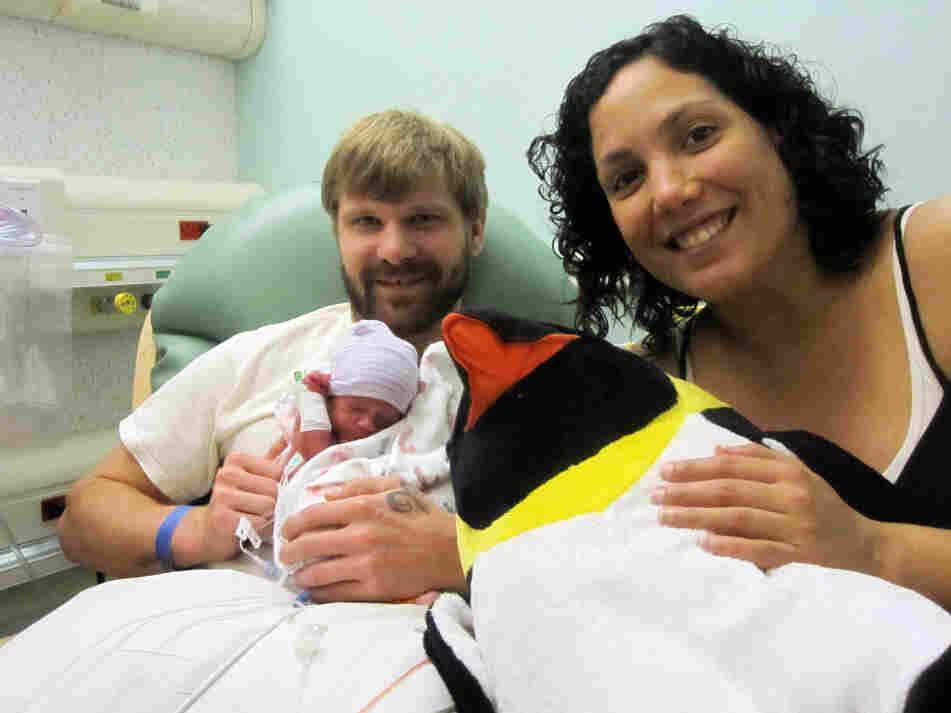 Loriani and Matt Eckerle are seen with their daughter Valentina Sofia on July 3. Valentina was delivered via an emergency C-section on June 24. Loriani almost died due to blood loss during the surgery. Courtesy of Loriani Eckerle hide caption 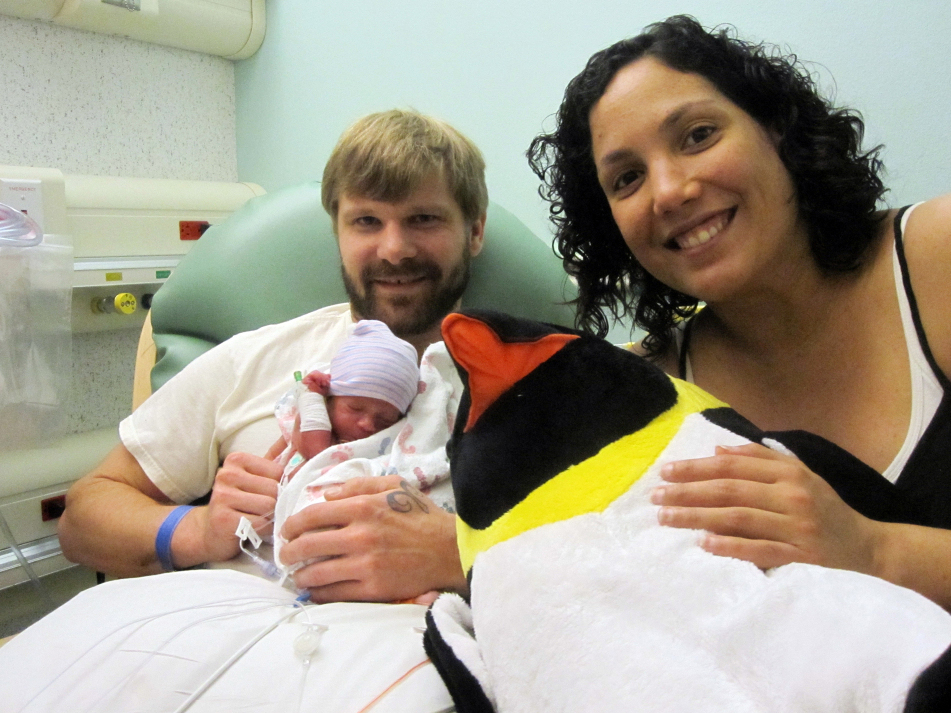 Loriani and Matt Eckerle are seen with their daughter Valentina Sofia on July 3. Valentina was delivered via an emergency C-section on June 24. Loriani almost died due to blood loss during the surgery.

June 23 was my 31st birthday. I spent it much like I had spent the past few days in my pregnancy (see my initial post and a reference to a certain Maury Povich). I was feeling not great, but I had become used to feeling not great. My gums kept bleeding, and I was convinced I had yet another dreaded result of pregnancy: gum disease. Surely this was my punishment for not flossing.

I barely made it through a shower and dressed up for dinner. I was excited to go out and celebrate, but certain that if it wasn't my birthday I wouldn't have made it past taking off my pajamas. I got into the car with Matt and suddenly remembered something else had been bothering me. My eyeballs had looked yellowish to me earlier that day, or maybe even the day before.

Normally when I share these things with Matt, he doesn't exactly dismiss them, but he doesn't make a big deal about them either. This time I caught his attention. He wanted me to call my doctor, but I had been down that path before. It seemed the further along in my pregnancy, the sicker I got and the harder it was to reach my doctor.

We decided to wait until the following morning when I had my bi-weekly non-stress test scheduled. I had gotten to know the nurses who did the testing, and they were much better in getting in touch with my doctor than I was. That night I celebrated my birthday with a wonderful salad of roasted beets and avocados, roasted clams, rosemary and thyme potato pizza and brown butter cake. I digress.

Later that night, I kept waking up with stomach, um, "issues." I figured it was the prescribed stool softeners finally doing their job. It didn't worry me. The next morning, I was so tired. I noticed blood on my water bottle and sure enough, it seemed my gums had been bleeding for quite a while. I couldn't imagine making it to my morning appointment. I called to reschedule for the afternoon, but they had nothing available. I came close to rescheduling altogether, but for whatever reason, I told them I would be late but I would be there.

You can guess what happened next. The ladies at antepartum testing didn't like my new yellow eyeballs so much. In fact, one of them told me my skin was also yellow, a little detail I totally missed. I'm told I need to be checked out in triage. Triage was so busy I had to wait to get in.

While waiting, it hit me a little. I felt sick. A very weird, kinda deep-inside-you sick, where you really just want to stop everything for a second and breathe comfortably but you cannot. I started crying a little and felt like a wuss, women all around me were in labor, and I'm only 34 weeks and probably just tired as usual.

I was relieved to finally lie down in bed in triage. The nurse had taken some blood tests, and I finally could relax. I imagined that I would probably be sent home with some medication or, worst-case scenario, admitted to be observed for preeclampsia, which I knew I was at risk for, and expected. But it was neither.

The nurse said my platelets were low. The doctor checked me out and ran more tests. Everyone kept asking if I was alone, and eventually I got the hint and told Matt he should come. The nurse and doctors were both animated and calm at the same time. I was having trouble reading these people, something I'm usually pretty good at. 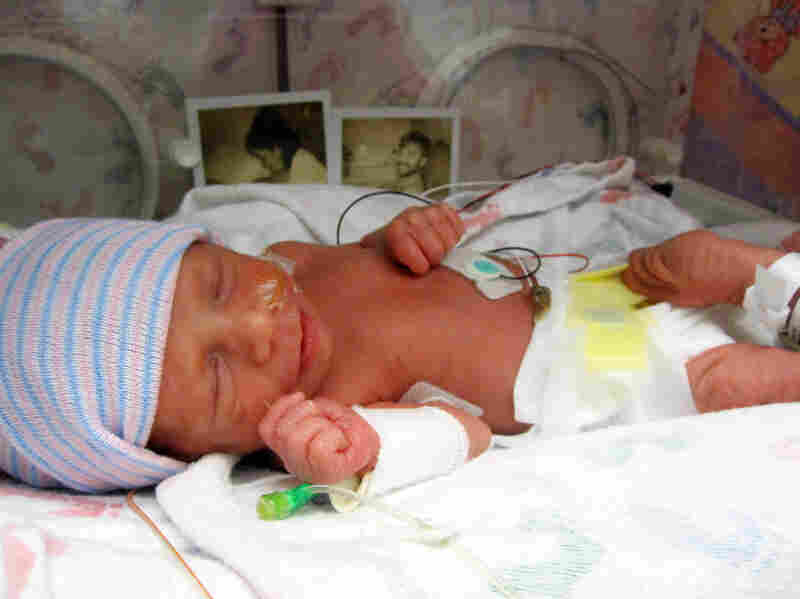 Valentina Sofia Eckerle is seen in the hospital on July 2. She was born during an emergency C-section on June 24. Courtesy of Loriani Eckerle hide caption 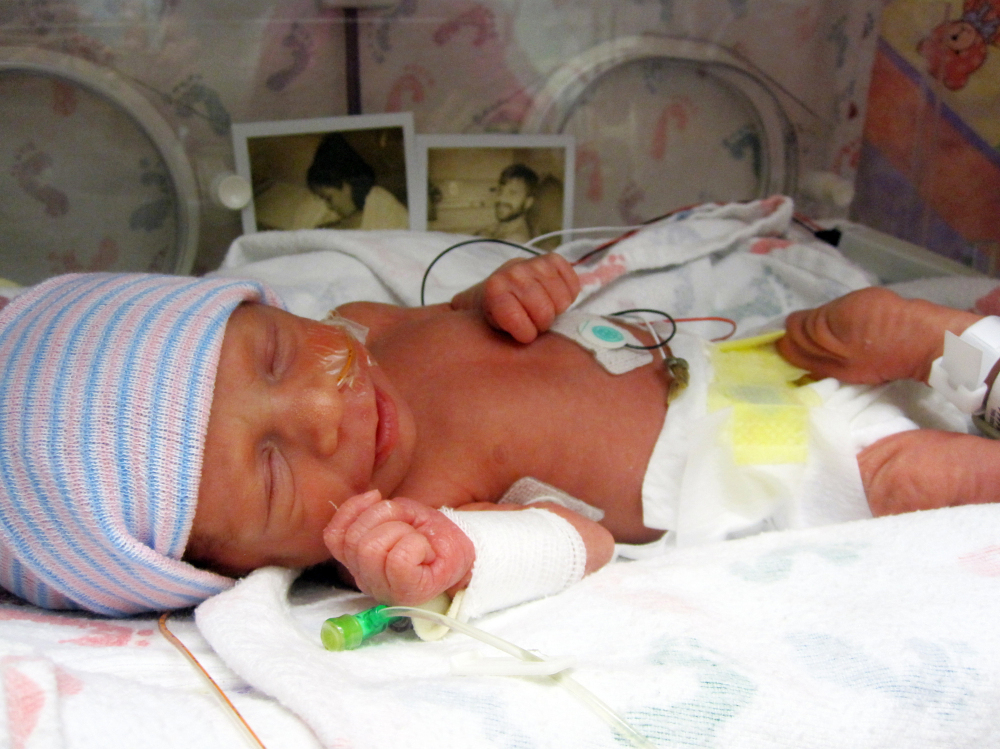 Valentina Sofia Eckerle is seen in the hospital on July 2. She was born during an emergency C-section on June 24.

I don't remember who said it or even why, but emergency C-section was mentioned and I was officially floating above the whole scene. I don't freak out and cry. I focus on breathing. I try to piece things together, but it's hard. Bilirubin up, making me yellow. Platelets low, can't clot blood. But baby is fine, that is all I know, and that is what I focus on until Matt gets there.

That night my daughter is born screaming, but I am not awake to hear anything. She is 3 pounds, 5 ounces and 16 inches long. She is strong and healthy, her size deceives. When I wake up from general anesthesia, Matt tries to tell me it's a girl, that she's OK. But I'm not registering the information and I pass out again. When I wake up for good, I ask for a pad of paper. There are tubes down my throat and I can't speak. It freaks me out. The first thing I write is, "Live?" He thinks I'm asking if I'm alive.

Matt has kept the piece of paper, and as soon as he showed it to me, I knew that I was talking about the baby. Was my baby alive? Boy or girl? Tomboy or girlie girl? Yes, I really did ask that last one — I had two girl names ready accordingly.

Thus far, Valentina Sofia (the girlie name, of course) is perfect. There are no signs of any trisomy anything whatsoever. We still have to do some more tests, but my god, she's alive and so am I. Since the delivery, I've found out that the surgery lasted over two hours because they couldn't stop me from bleeding. I was taken to ICU, where I received numerous blood product transfusions over a three-day period. I think it was on Sunday that I spoke with one of the doctors and was told that I had been dying.

They're still not sure what happened, and I have to meet with some specialists to hopefully get to the bottom of it before I go getting myself knocked up again. In the meanwhile, I spend my days staring at my daughter and letting my body heal. My eyes are finally turning white, and my gums have stopped bleeding. The floss continues to sit on the counter, unused.

Loriani was unconscious for various periods of time during the surgery and recovery. New dad Matt Eckerle, shares the story from his point of view.