Accessibility links
Welcome To The World, Dalia Joule Braun-Torrence! : The Baby Project Lateefah and Frank Torrence announce the arrival of their baby girl — and the meaning of the name they chose after much deliberation. 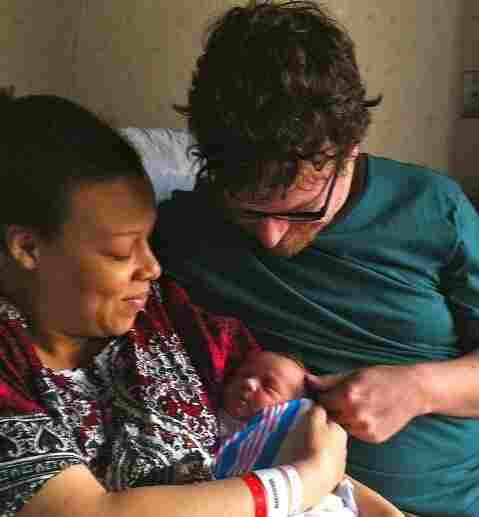 Dalia Joule Braun-Torrence arrived Sunday at 8:43 p.m. She weighed in at 6 pounds 7 ounces and is a long little thing at 19 3/4 inches. Courtesy of Lateefah Torrence hide caption

Dalia Joule Braun-Torrence arrived safe and sound after nearly 38 hours of labor (more on that later, for sure) on Sunday at 8:43 p.m. She weighed in at 6 pounds, 7 ounces and is a long little thing at 19 3/4 inches.

Post-delivery, Frank and I were still unsure of her name. In the few days before her birth, we had narrowed our girl name list down to Aziza and Dalia.

For the middle name, we wanted to honor our grandmothers, who all had first names beginning with J. We couldn't seem to find a name we loved that wasn't too close to honoring only one of our grandmothers, until randomly one night last week I said to Frank, "Does 'joule' mean energy?" Later, Frank told me he thought, but didn't say, "I think it's the name of some old dead European white dude." Wikipedia "confirmed" both of our notions.

When our babe was handed to us, Frank suggested we ask her what she thought of our name choices. I was pretty sure she was a Dalia, as the Internet tells us her name is of Swahili or Arabic origin meaning "gentle," and she came out of the womb with her gray eyes wide open but nary made a peep as she wiggled her arms and legs. We looked into her tiny face and asked, "Dalia?" Our little girl stared at us inquisitively. I think she may have been thinking, "Obviously." We then asked, "Aziza?" — she turned away from us, and we knew our Dalia was here.

We would love confirmation from any Arabic or Swahili speakers that our interpretation of the name is correct. Or not. We can always say we named her for the Spanish variant of Dahlia.