Accessibility links
'Baby Get Out!': How I Was Afraid For My Baby And Had A 48-Hour Deadline : The Baby Project The day before she reached 40 weeks, Lateefah Torrence found out she had an increase in her amniotic fluid — and her doctor told her she had 48 hours before they would induce her. Out of determination to avoid the Road of Cascading Interventions, she tried everything possible to get labor going.

'Baby Get Out!': How I Was Afraid For My Baby And Had A 48-Hour Deadline

'Baby Get Out!': How I Was Afraid For My Baby And Had A 48-Hour Deadline 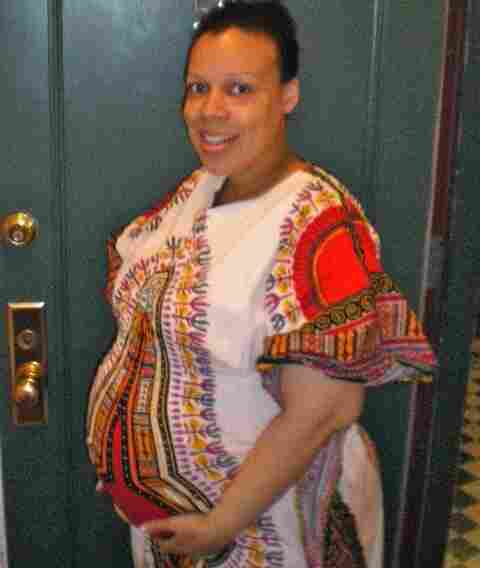 Frank takes a shot of Lateefah as they leave for the hospital. Courtesy of Lateefah Torrence hide caption

At 39 weeks and 6 days, Frank and I sat in the darkened ultrasound room brainstorming boy names while waiting for the tech to return. The ultrasound portion of my weekly non-stress tests had become routine for us: The tech would point out our babe's heartbeat, take some measurements and then disappear to deliver the report to an unseen perinatologist. I would dress, then the tech would appear to tell us we were free to go. But on this day, the tech came back with the doctor. I half-jokingly said to the man who was our version of the Wizard, "I don't want to see you."

When I replay the memory in my head, my view shrinks to his lips moving and his finger scrolling through doctors' names on the screen of his phone. He taps on Dr. Y's name and brings the phone to his lips. I hear something about "increased amniotic fluid" and "she should be delivered by 40 weeks."

It's Thursday. Forty weeks is tomorrow. What about the hours Frank and I had spent practicing our HypnoBabies scripts? The months I had gone to sleep listening to suggestions on my iPod? Frank wondered if the specialist was only seeing me as a set of numbers — old and fat. Was the perinatologist pushing for an unnecessary induction? In a microsecond, everything cleared. All I wanted was my baby safely in my arms, and I no longer cared how my baby was coming into the world, as long as he or she came into it safely.

Except, I was now afraid for my baby and scared of the dreaded oxytocin. I was determined to do whatever I could to get labor going without (insert voice of doom) careening down the Road of Cascading Interventions.

After consulting with the specialist, Dr. Y called me. She carefully explained to me that while I was not in the danger zone, the increased amniotic fluid could be an indicator for a problem with my placenta and placed me on the schedule for an induction on Sunday.

As soon as I could, I downloaded a hypnotic suggestion track I like to call "Baby Get OUT!" On Friday morning, I headed for acupuncture to encourage labor and hoped that my water would break during a noon screening of Harry Potter and the Deathly Hallows, Part II. It did not. But my lack of labor did mean we had time to stop by Carnegie Deli on the way to the subway for take-out pastrami and potato knishes.

On Friday night, I decided I really needed to trim my hair and went to sleep listening to my hypnotic suggestions. At 7 a.m. Saturday, I felt a contraction. Had the baby been waiting for me to deal with my split ends? After an hour or so of contractions, I happily called my acupuncturist's office to cancel that day's appointment. I labored alone for a bit, wanting to make sure that Frank was well-rested for the ride ahead and to have a bit of space to feel the enormity of what was about to happen.

By 11 a.m., Frank was timing my contractions as we listened to Wait, Wait, Don't Tell Me. I bounced on a yoga ball and repeated my HypnoBabies mantra, "Open. Open. Open." When the pain became more than I could handle on my own, Frank would place his warm hand on my forehead, say my cue word, and my body would relax under his gentle touch. By 4 p.m., my contractions had been at least one minute in length and three minutes apart for an hour. I vomited and I just knew this meant I was in transition from early to active labor and the baby would come soon. Terrified that I would have my baby in a cab, Frank called Dr. Y and she told us to "come on down" to the hospital.

Coming up in the second part of this story: tears, medical arrogance and a super labor and delivery nurse to the rescue.